This is a workshop based on letters in the archives sent by Bert Clements of Kidderminster and Cyril Sladden of Evesham. These were two of the thousands of local men who joined up in WWI. We have delivered this workshop quite a few times with children, using original letters at the start, which provide a great opportunity for children to get close to real items. As part of the Worcestershire World war One Hundred Project we went out to lots of schools in the run up the Remembrance Day 2018. With the current situation schools can’t come to us, and many schools are reluctant to have visits, so we have uploaded these resources to enable you to deliver it yourself in the classroom. Copies of worksheets and images of letters are enclosed. The format of the workshop is below, with potential answers and things to look out for, to enable you to run it in your school. If you’d like us to come to you please get in touch. 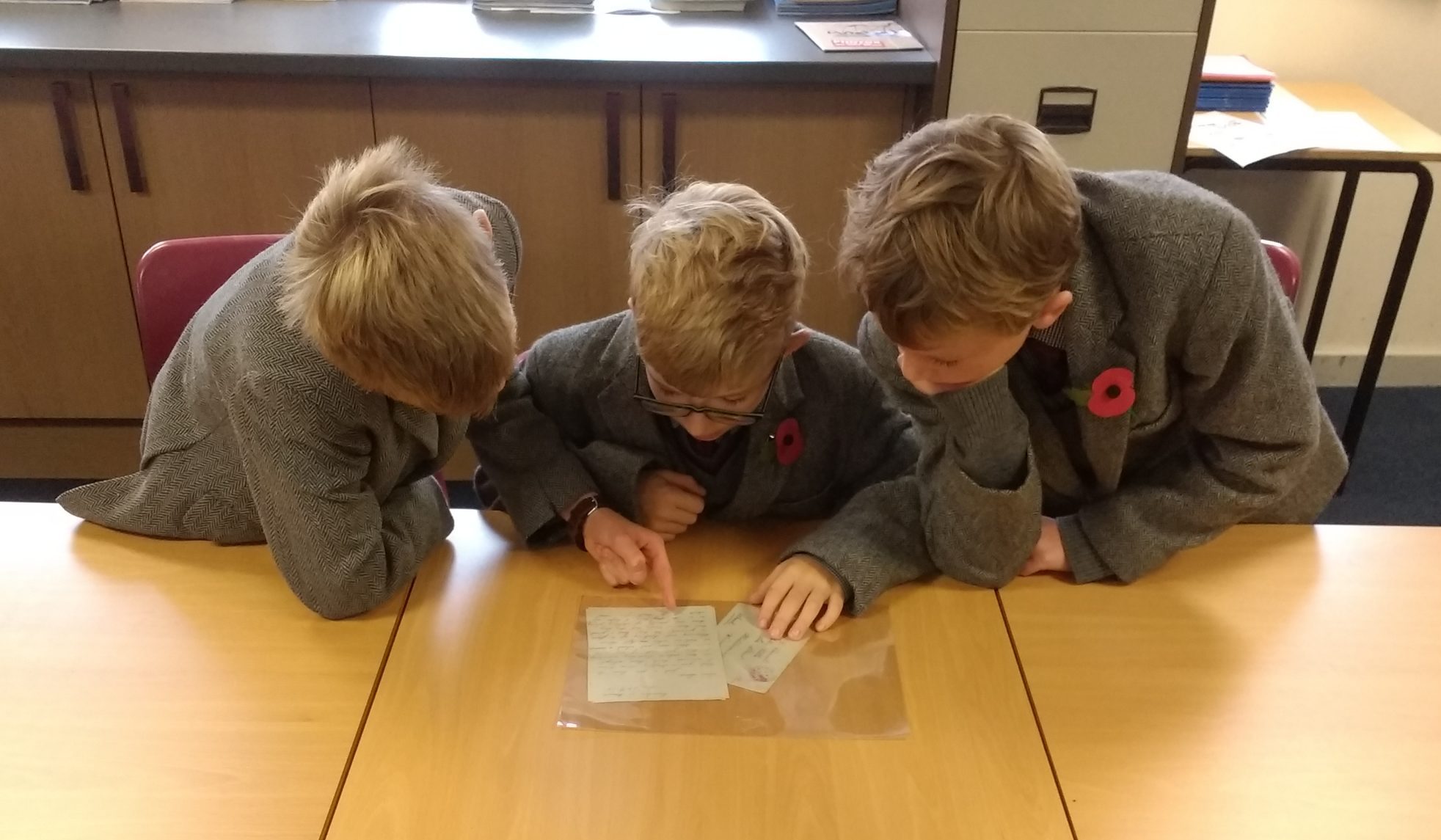 Letters provide an insight into people’s experiences. It’s easy to be overwhelmed by the huge number of people involved in the war. Letters zoom down to individuals. Armies are made up of thousands of people, all different, but many have common experiences and emotions. They are a great opportunity of using primary historical sources, and we have video recordings and transcripts to help the children get into the meat of what is being said rather than struggling with handwriting.

Bert was a Kidderminster man who served in WWI in the Royal Artillery, joining on 21 September 1914, around 6 weeks after war was declared. He was born in 1894, living in Lea Street and going to Lea Street School. He did survive the war (it is always strange going through war letters half expecting to come across a telegram at the end sent to a man’s parents). On his return he married Winifred in 1924 and stayed in Kidderminster. After his death his family passed the collection of over 20 letters to the Record Office so that other people could read them.

Cyril Sladden (1890-1974) served with the 9th Battalion Worcestershire Regiment from 1914-1919.  From a well to do family, he was an officer, and his two brother also served as officers too. 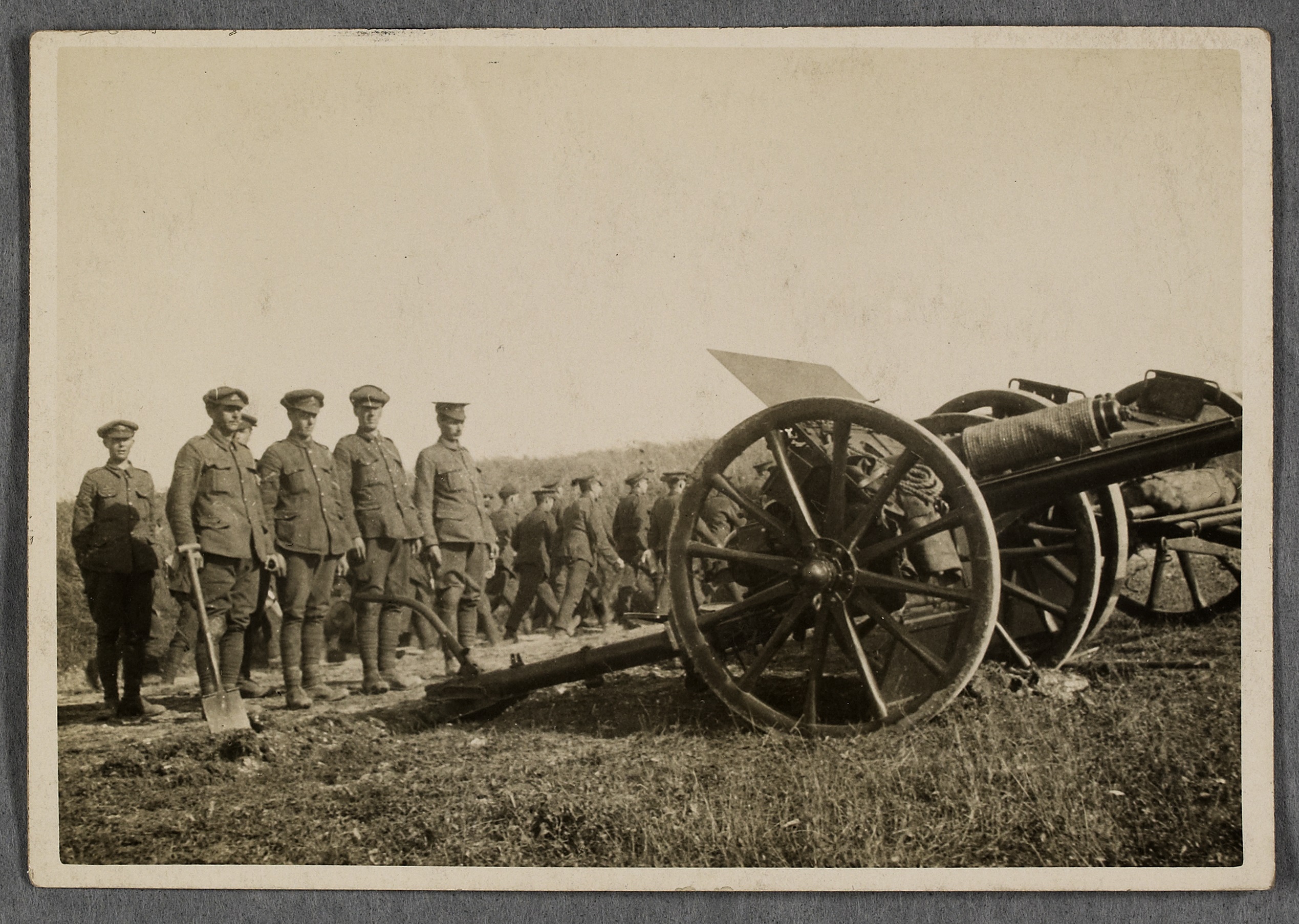 Photo in among the Bert Clements letters 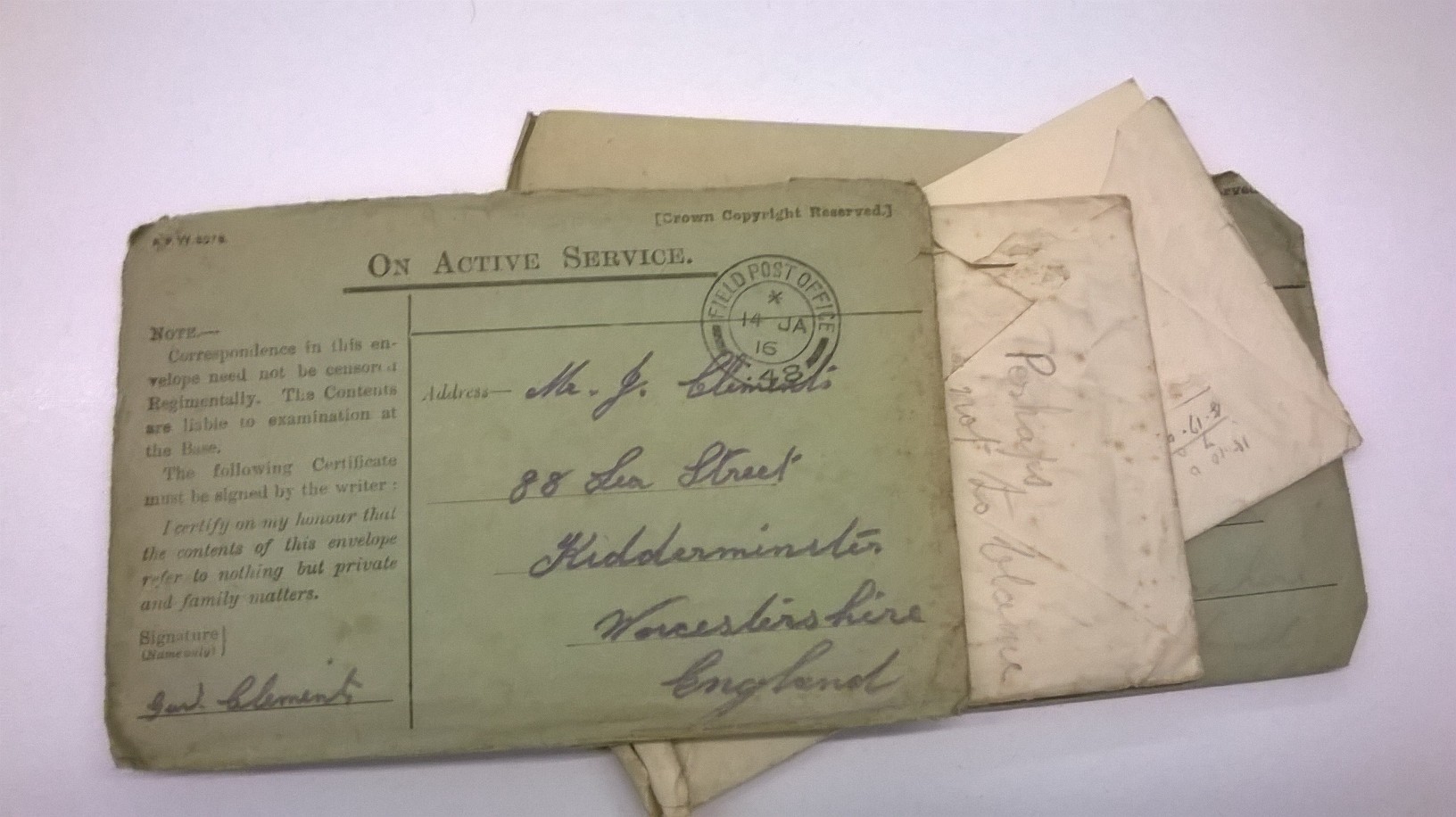 What have you got in front of you?

What do you know about WWI? Open question to see what they know from lessons or what they know. Some, not surprisingly, may be confused between WWI & WWII as they may see little difference between events 100 and 80 years ago.

How do we know about WWI, what sources help us?

These are the evidence historians use. Letters are useful. Give someone’s perspective but just one person’s views. May be similar to other people, may be different.

We are Worcestershire Archive & Archaeology Service, have 12 miles of archives in boxes like these. Boxes don’t look interesting but contain stories, which is what people are interested in, such as stories from the front. Real stories about real people. Can be random what has survived. Why might some not survive (thrown away, lost etc.)? We have a few collections of letters including Bert Clements of Kidderminster (not sure if he is on one of the photos).

Ask for answers, and also anything surprising?

What does Bert talk about in his letters?

His role as a telephonist

Thinking of home – his dad’s bowls team and thinking of what he’d like to do when he goes home eventually. Sending greeting to family and friends, and wanting them to remember him. Letters are as much about home as they are about describing his experiences in France.

Presents and letters – highlights for the men out in France, and looking for gifts to supplement rations and show people are thinking of him

What is his mood? Is he happy, sad, scared?

Seems positive. We expect him to be scared and sad, but his letters don’t show this. He’s thinking of others, and is matter of fact about things including bombs. Wants war to be over though.

Do you think he’s telling the truth?

Don’t know! He may be, and he may be positive. However he may also be putting on a brave face. Does he want his dad to know how he’s feeling. Without asking we don’t know and just have to make an educated guess from reading the letters and from what we know about the war.

Bert is one man out of hundreds of thousands. What’s the problem with using just his letters? He may be an exception or may reflect many others. So we’ll look at another set of letters, Cyril Sladden of Badsey near Evesham, an officer. From a more well to do family and well educated.

Have you heard of Gallipoli? In Turkey. War wasn’t just in France & Flanders, which is what people think of. Worcestershire Regiment served elsewhere too, including Turkey and Iraq. Who knew that?

Read the letters from Cyril (transcribed so don’t need to struggle with handwriting). A-C or all 5 if longer than an hour

How useful are letters to a historian?

What have you learnt? Any surprises?

Join the dig! Roots in Time is a National Lottery funded community project exploring the archaeology of a new woodland near Evesham, Worcestershire.

Running since early May 2022, we meet weekly to do a classroom session then go out to the local cemeteries to do a hands on session looking at the history of the cemeteries, the stones, the burial practices, the people being commemorated (including their culture in context) and the archaeology of the memorials.

The Redditch Military Tribunal Project was developed as an additional project to compliment the work of the Worcestershire World War 100 project. This was the largest WWI Commemoration project outside London, and brought together a large groups of partners to deliver events across the county.     The new project, following on, was considered important...

A nationally important archaeological archive is now accessible online due to a 2018-2020 digitisation project by Worcestershire Archive & Archaeology Service (WAAS). The Mancetter-Hartshill excavations investigated one of the largest known industrial complexes in Roman Britain, which was a major pottery production centre for mortaria and other pottery styles.

Throughout this two year project, Worcestershire’s Historic Environment Record worked to identify, record and better understand the significance of 20th century buildings and public places across the county. Many more await discovery and assessment! As with any other period, the heritage of the 20th-century, reflects wider social, cultural, economic, political and technological change. These changes...

Worcestershire Archives and Archaeology Service have been awarded an eighteen month grant by the Wellcome Trust to conserve and catalogue a range of archival collections relating to hospitals, health professionals and associated organisations. The project will build on our previous Wellcome funded project cataloguing, digitising and conserving mental health records from Barnsley Hall and Powick...

Market gardening shaped the Vale of Evesham's landscape and economy from the 19th to mid-20th century, but due to much of this heritage and knowledge being lost a project began in 2018 to record, share and celebrate this heritage before it's too late.