Traditionally, the 21st December marked the feast of St Thomas the Apostle and was a day that saw the poor go round asking for money and food, including going door to door round the more well off in the parish. This was known as going ‘a Thomassing’ or going ‘a gooding’. People would seek money and food to help them through the next couple of weeks so they were able to celebrate Christmas, and in return would give the donor a sprig of holly or mistletoe. At the Great House in the parish special spiced ale would be ready to welcome the visitors. 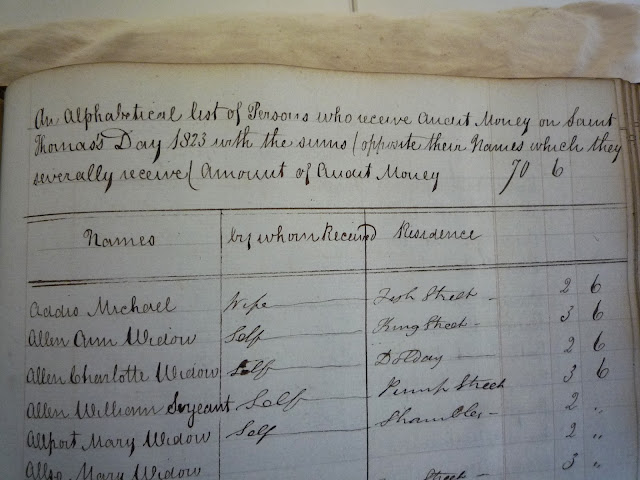 List of recipients of St Thomas’s Day charity, dating from 1823

This tradition may relate to a legend of how St Thomas, when given money to build a palace for a king, used it instead to help the poor. Or else it may just be a convenient day before Christmas for people to go around asking for money to help them celebrate Christmas.

In Worcestershire it is said that the tradition was to go round asking for apples, singing the following song:

A wissal, a wassal about the town:

Got any apples, throw them down.

This is the best house in the town.

Holly and ivy and mistletoe bough,

Give me an apple and let me go.

Up the ladder and round the wall,

Up the stocking and down the shoe.

Got no apples, money’ll do;

Got no money, Go bless you.

In some places it was more formalised, and a specific charity would give a St Thomas Dole to people, usually consisting of bread and coal. Collections would be taken by the local church and given to the Churchwardens to distribute at this time. 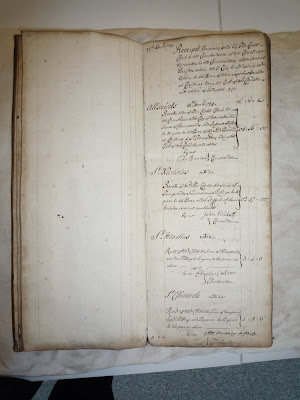 Within the Worcester City Archive we have the records of the various charities overseen by the Corporation of Worcester. This includes the Good Friday and St Thomas’s Day Charity. It appears that this was general charity containing a number of small bequests and managed together. On Good Friday they would use money to buy and distribute bread, and on St Thomas’s Day money was given to each parish to distribute money to the worthy poor. Everything had to be accounted for, so the names of all recipients, and in some cases their addresses, were written down. Unsurprisingly many were already living in the city’s almshouses, and in some cases the intended recipient had died, so their name is crossed out and replaced by an alternative. In 1814 over £70 was given away (around £3,000 in today’s money) between around 700 people, given 2 shillings on average. Aldermen also received small sums to give out to people in need they came across. In the late 19th century the charity was absorbed into a larger consolidated charitable fund.

In Deeping, Lincolnshire, they still have a St Thomas’s Day charity, which gives out money to resident widows over 60, however, you can receive a loaf of bread and bucket of coal if you prefer!

To discover more check out the Worcester City Archive (BA9360) which was catalogued recently and can be accessed through ouronline catalogue.