Christmas and New Year with the Lytteltons and their Circle 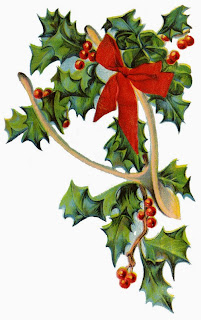 Many of the Christmas activities and traditions we follow today were made popular during the nineteenth century.  For the Victorians in particular Christmas was centred round the family with attendance at church, sitting down to Christmas dinner, gift giving, parlour games and visits to neighbours, friends and relatives all shared by the whole family.  For many, Charles Dickens’s A Christmas Carol defined the family orientated Christmas and influenced people’s notion of what Christmas time should be like.  The letters and diaries of the Lytteltons and their circle offer a unique window on their Christmas activities and traditions.

The snowy weather was just as popular a topic of conversation during the Christmas season as now.  In December 1808 the 21 year old Sarah Spencer (later married to William Henry the 3rd Lord Lyttelton) was at Althorp writing one of her regular letters to her brother Bob (Robert Cavendish Spencer), who was away from home serving in the navy.  Sarah writes her letter over several days starting on the 18th and includes a description of the wintery conditions prevailing at the time:

‘Tuesday 20th  We are enjoying now in all its glory the genuine long frost belonging to Christmas.  Poor Althorp is obliged to beat for a woodcock in Nobottle Wood; he is not able to hunt.  Poor I can’t take my daily airing on the Northampton road, said road being one sheet of ice, and poor everybody is creeping about from fire to fire, wrapped up in shawls, and shivering and chattering away deplorably.  Four icicles, twice as long as my finger, have been hanging since Sunday, glittering in the powerless sun, from the sash of the library window; a little snow falls every night, and in short we are just the reverse of what you must be now.’ 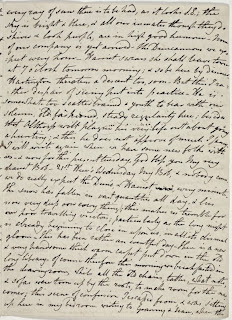 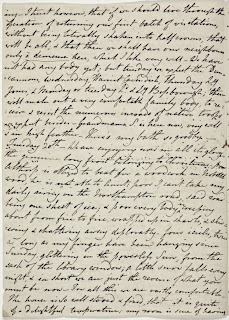 For Sarah awaiting the arrival of their Christmas house guests on the 21st and wondering if they are going to get there as vast quantities of snow had been falling all day, there was the added excitement of an unexpected caller at the house:

……. the soft sound of carriage wheels making their way through the snow drew me to the window, thinking the Duncannons were arriving, instead of whom, behold Hartington’s head in the chaise.  I went down to be sure it was really him… It was that steady personage, however, on his way to Derbyshire to a ball.  He thought he might come and lunch with us in a flying way; with a friend of his Sr Wm Rumbold a great Priorist I fancy.  In they came, took plenty of cold beef & chicken, resisted all our entreaties to stay longer & flew off again in their post chaise in an hour.” 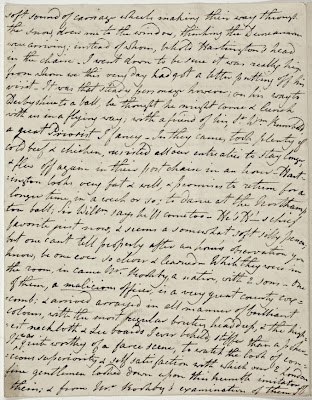 Sarah’s description of the Marquess of Hartington’s visit

Hartington was Sarah’s cousin.  Her aunt (father’s sister) and Hartington’s mother was Georgiana Spencer who married the Duke of Devonshire.

Putting up the decorations is an essential part of Christmas traditions.  For the Lytteltons that included decorating the church.  Lavinia Lyttelton records in her diary working all day on Christmas Eve on the church decorations.

‘the decorations put up which took the whole day.  I think they are more successful & complete this Xmas than ever before  Two zinc texts, one over the vestry door & the other over the cedilla with the words “Unto us a child is born Unto us a Son is given”‘ 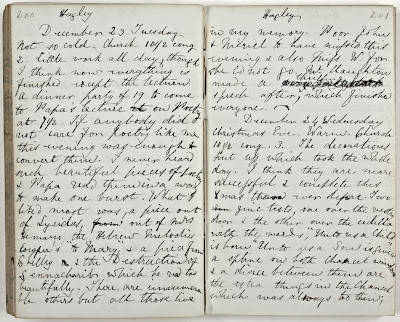 Just as we might go out to a show of some sort at Christmas, Lavinia can hardly contain her excitement at the news that she is going to a performance of the Messiah at Birmingham Town Hall with her siblings, a treat from her aunt and she records in full her thoughts and opinions about the event.

She begins ‘ I can quite say I was not in the least disappointed, it was grander than I even dreamt of.’  She mentions individual artistes – Sims Reeves, Miss J Elton, Mr Winn and Madame Rudersdorff and what she thought of their singing.  John Sims Reeves (1821-1900) was considered by many to be the foremost English operatic tenor of the mid Victorian era.  She also highlights particular sections she especially enjoyed  You can feel her enjoyment of the evening leaping off the page as she finishes her diary entry:

‘I shall never forget the chorus of Unto us a child is born”.  I think it struck me the most.  It quite took my breath away.  One might go on raving about it for ever.’ 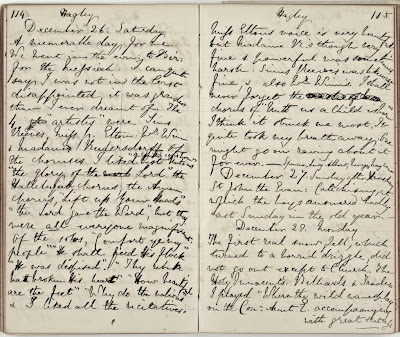 Interestingly her sister Lucy records the same event in her diary.

‘The girls, Albert Nevy, and Spencer and I had the treat of going to Birmingham to hear the “Messiah”, which was performed admirably, the solo singers being Sims Reeves, Winn, Mme Rudersdorf and Julia Elton.  It was the 1st time the girls had heard an oratorio, and great was their enjoyment’.

From The Diary of Lucy Cavendish  Vol 1 edited by John Bailey, London 1927.

Making your own entertainment

Family entertainment was just as important then as now.  Everyone joined in.  This might involve reciting a poem, musical renditions or singing.  Party games were also popular.  The nineteen year old Lavinia’s diary entries for December 1868 are full of  references to ‘singing in plenty’ and ‘laughing much’ and the family all being together, but there is also some reflection on growing up.  On the 25th December she records ‘Grand dinner of 18 & capital games & music in the evn.  But perhaps we are just beginning to out grow games as games.  The choir sang well in the hall.  What a contrast this Xmas to last when we were scattered more than we ever were before’.  Her entry for  28th  December is also about them putting on their own entertainment. ‘ Practice at the barn for tonight when came off an entertainment, a very successful one I think.  I sang in a trio with Miss I G & Spencer, Charles was in the Choir, the glees were pretty & the readings above average.  Nevy read from Happy Thoughts…’ 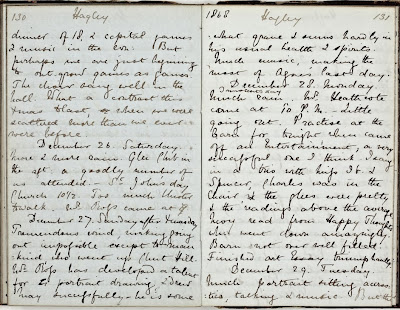 Charity was an important part of the well-to-do family’s life and the Lytteltons were no exception.  The first day after Christmas was traditionally devoted to charity, with money given in boxes to servants, tradesmen and the local poor, hence ‘Boxing Day.’  The popular Christmas rhyme ‘Christmas is coming, the geese are getting fat, please put a penny in the old man’s hat’ makes the point that in the midst of all the Christmas preparations and celebrations it was important to remember those less fortunate than yourself even if you could only give your blessing.  Certainly Lavinia records in her diary that she ‘rode to Stakenbridge with the Christmas money and gave it to divers poor people.’

For both Sarah and Lavinia New Year seemed to be a time of reflection.

Sarah, looking back on 1808, felt it was a year when she got to know her brother much better through their exchanges of letters.  She says ‘…  in short I have made acquaintance with you; for before you went to sea I certainly did not know you; I now do quite thoroughly; & what an addition to my happiness this is!.’  Recalled from her reverie by the sounds of the first day of hunting since the snow she continues ‘I have now got quite on board the Tigre, I could almost fancy myself there with you, but the sound of the horses’ feet, huntsmen’s horns & halloos, & a single look at the half thawed snow brings me back to cold winter, inland amusements & all the merry bustle of Christmas in this comfortable homely place.’ 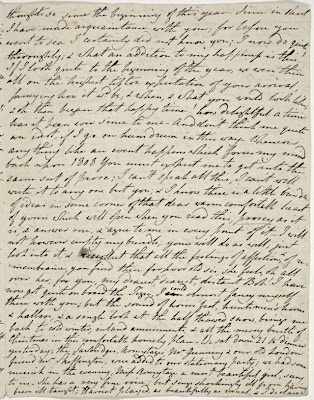 For Lavinia too the last day of the old year was a time for looking back over the events of the last year.  Earlier diaries record family events such as her brother Charles’s coming of age and the birth of her sister Meriel’s baby in 1863.  Later diary entries while still containing family information, start to look at the wider world. 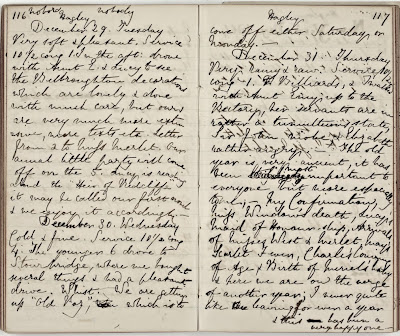