Our Treasure today is a Bronze Age biconical urn from Clifton Quarry that has been chosen by Laura Templeton, Senior Illustrator. Here she tells us more about the find:

Trenching at Clifton Quarry unearthed a Bronze Age ‘shouldered’ or ‘biconical’ urn. About a third of the pot seemed to be present, but was so crushed and fragile that it was lifted from the ground in a block of soil, wrapped in elastic bandage and bubble wrap, and boxed just as it had rested in the ground. We were concerned that, because the pot was so fragile, it might deteriorate quite rapidly. 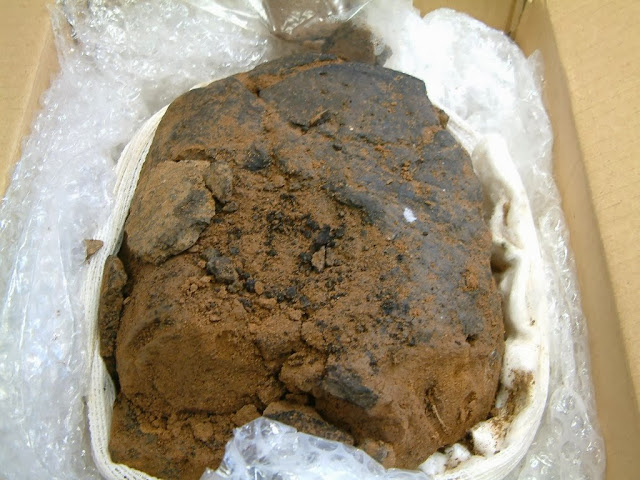 The vessel as it arrived

Finds staff considered that many of the sherds were so degraded that they might not survive further treatment – let alone handling or cleaning – so as much soil as possible was cleared from its outside surface, and it was photographed. After some discussion and consideration of the options, we decided to draw the pot before it was excavated from the soil block in order to record the sherds and the decorative details before there was any further deterioration.

The task before me was to draw the vessel to scale, with minimal handling. With a glass plate placed horizontally above the vessel, and using a home made ‘biroscope’ to sight vertically down through the glass onto the pot, I drew the basic shape and decoration onto the glass plate. 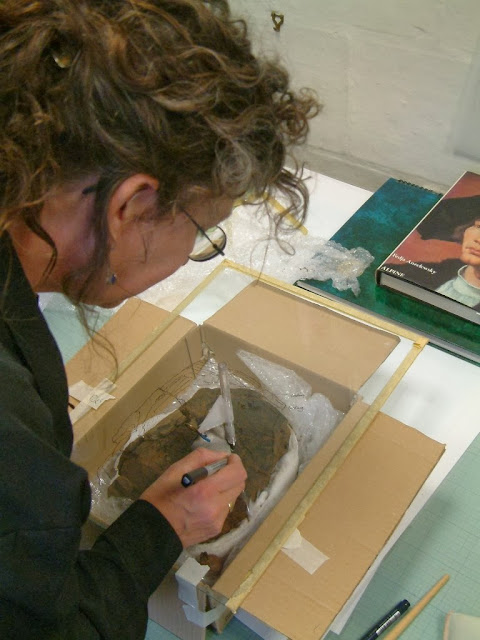 Drawing the details onto glass using a biroscope

I used a fine pen to draw the shape of the sherds and the decorative details on to the glass – some details are too delicate to draw on to the glass so I marked their positions and measurements and made notes of particular details I needed to include when completing the final drawing. Using a biro-scope is tiring on the eyes and regular breaks are needed – the work can’t be rushed at this stage.

Once all the major measurements were complete, I completed the drawing in pencil at 1:1, again checking measurements with dividers.

The profile of the pot was well preserved and the soil held it in a very good position for recording, but again, I could not lift the pot or move the sherds. Electrical soldering wire gently pressed against the side of the vessel held the shape of the profile extremely well – certainly for the brief moment it took to trace the shape onto drawing film. 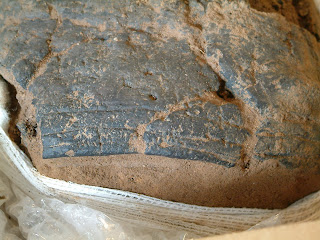 A close up of the rim

I hoped that once the sherds were excavated from their soil block, enough would survive to complete a profile and reconstruction of the pot and this was just about possible. Many decorated rim sherds completely crumbled, but a few thicker pieces  particularly near the lug on the shoulder – managed to survive. These gave the angle of the rim and the thickness of the body, and with these last required details; I could create an archaeological pottery reconstruction drawing, inked and looking as if the pot had been an everyday example. 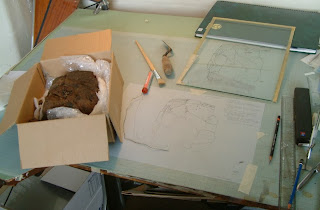 A work in progress

In the report figure, I chose to present both pencil and ink drawings of the pot. Many sherds which had not survived were shown in the pencil version, whereas the ink drawing gives the dimensions and form of the vessel as a scale drawing. By presenting it in this way, we could convey the immediacy of the first record; how fragile the vessel had been at the time of its discovery – how fortunate we were to recover it and the story it is now telling us. 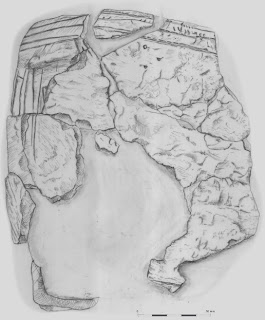 A pencil drawing of the Bronze Age pot

This type of biconical urn is not an unusual discovery in Britain, but this particular one has added to the evidence showing that the site at Clifton is of particular regional importance. The prehistoric phase of the site falls between the mid 10th and mid 4th century BC. It is one of very few known unenclosed Late Bronze Age/Early Iron Age settlements in the English West Midlands and is the only known site of its type in Worcestershire. 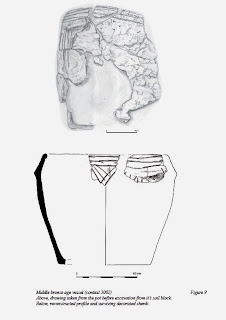