Treasures from Worcestershire’s Past: ~19~ The lives, loves and travels of the Moules of Sneads Green

This week’s Treasure has been chosen by Margaret Tohill, Archivist. Here she tells us more about what stories can be gleaned from the family papers of the Moules of Sneads Green:

The papers of the Moule family of Sneads Green contain a mix of property deeds, financial records and personal letters and photographs covering a 350 year period and are quite typical of a small family collection.  What I particularly love about the collection is the tantalising glimpses the documents give you into the lives of the family, but you never quite get the whole story.

One of the first documents in the collection I catalogued was a letter from an unidentified young man from London to Francis Moule dated 12 July 1820, which seems to have been written in response to the man’s desire to marry one of Francis’s daughters. Francis initially expresses his surprise, but then almost reproaches the man with the phrase ‘how could you be so infatuated as to form an attachment so hasty, so uncongenial, so imprudent and even preposterous’  and states that the man has not had enough time to get to know her. 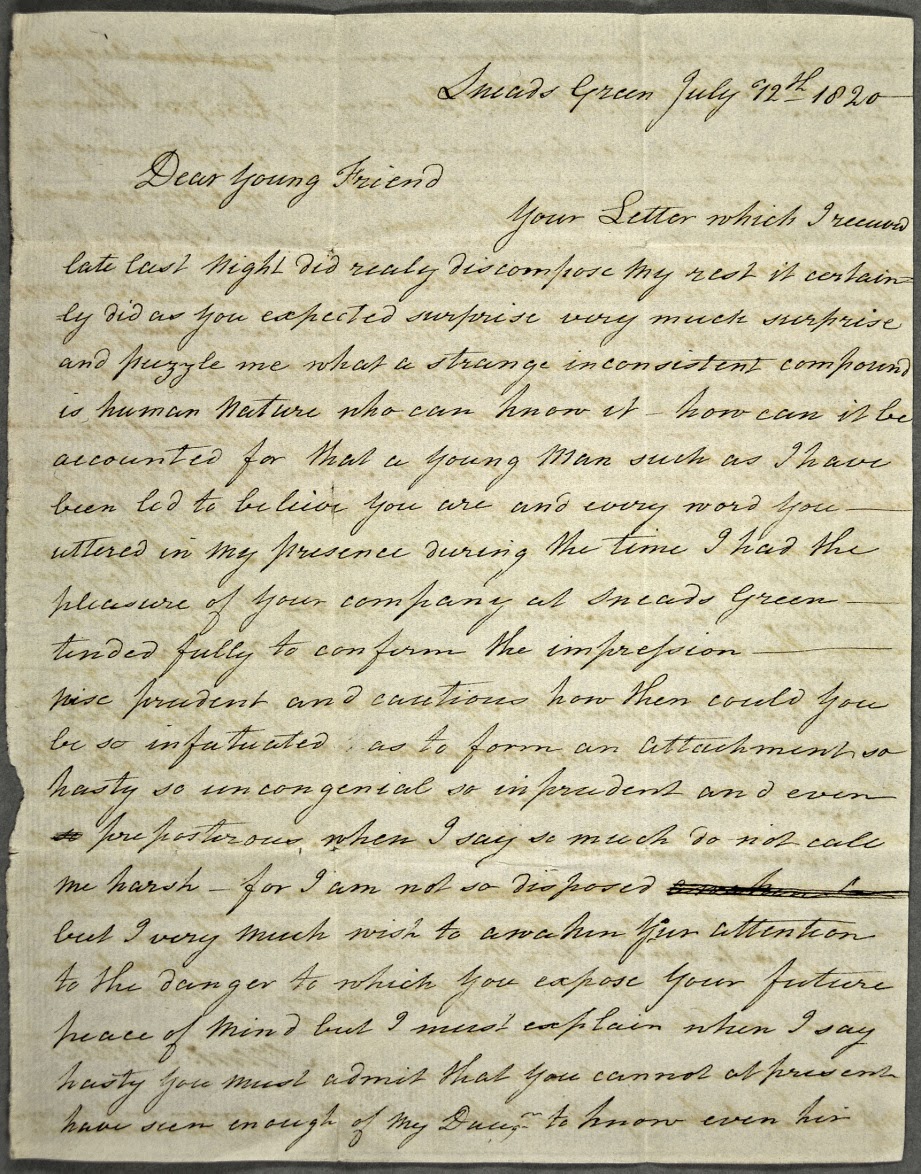 Reasonable enough but, when you turn the page you cannot help but raise an eyebrow at Francis declaring that his daughter ‘must be very unfit for the companion of an enlightened citizen of London, being totally unaccomplished, her education slender and even illiterate’.  He also raises her limited financial prospects and hopes that the young man is not trifling with his daughter’s affections.  One’s eye cannot help but be drawn to the line ‘for God’s sake reflect candidly and deliberately upon the subject’. 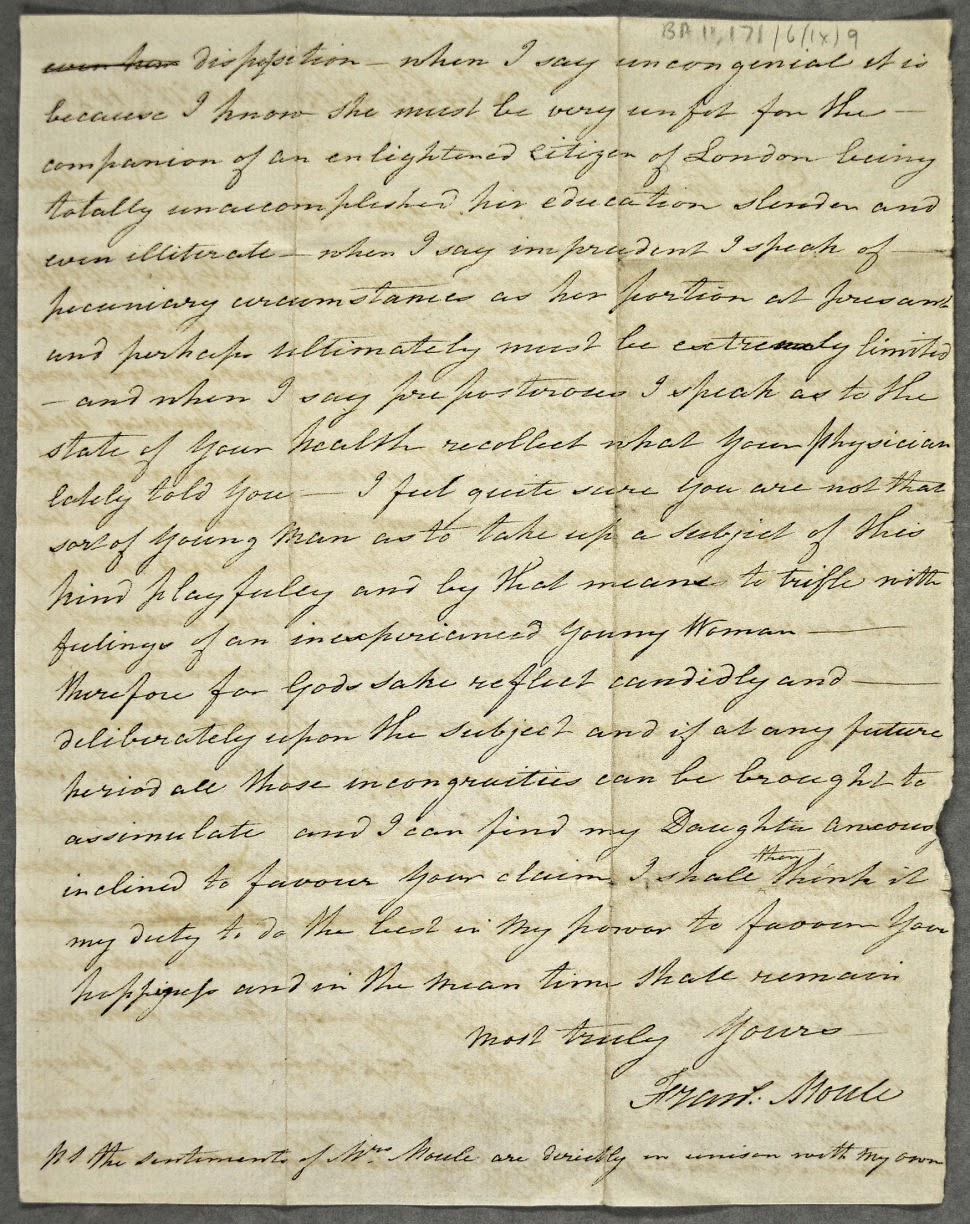 Francis does end his letter that if the incongruities can be sorted out and his daughter is in favour he would then favour the match.  It is unclear which of Francis Moule’s four daughters was the subject of the letter and who the man was.  Frustratingly there are no other documents in the collection relating to the matter.  Of the daughters only one, Mary, married and she did marry a man from London.

Francis Moule’s granddaughter Caroline was born and seems to have lived much of her youth in London, as Francis’s son John Watkins Moule traded as a silk draper in London and then retired to Kent.  Caroline met and married a chemist from London called Frederick Stocks in the summer of 1874.  There are several letters from Frederick’s friends and family offering congratulations and some accounts which may relate to purchases for the wedding or their home. 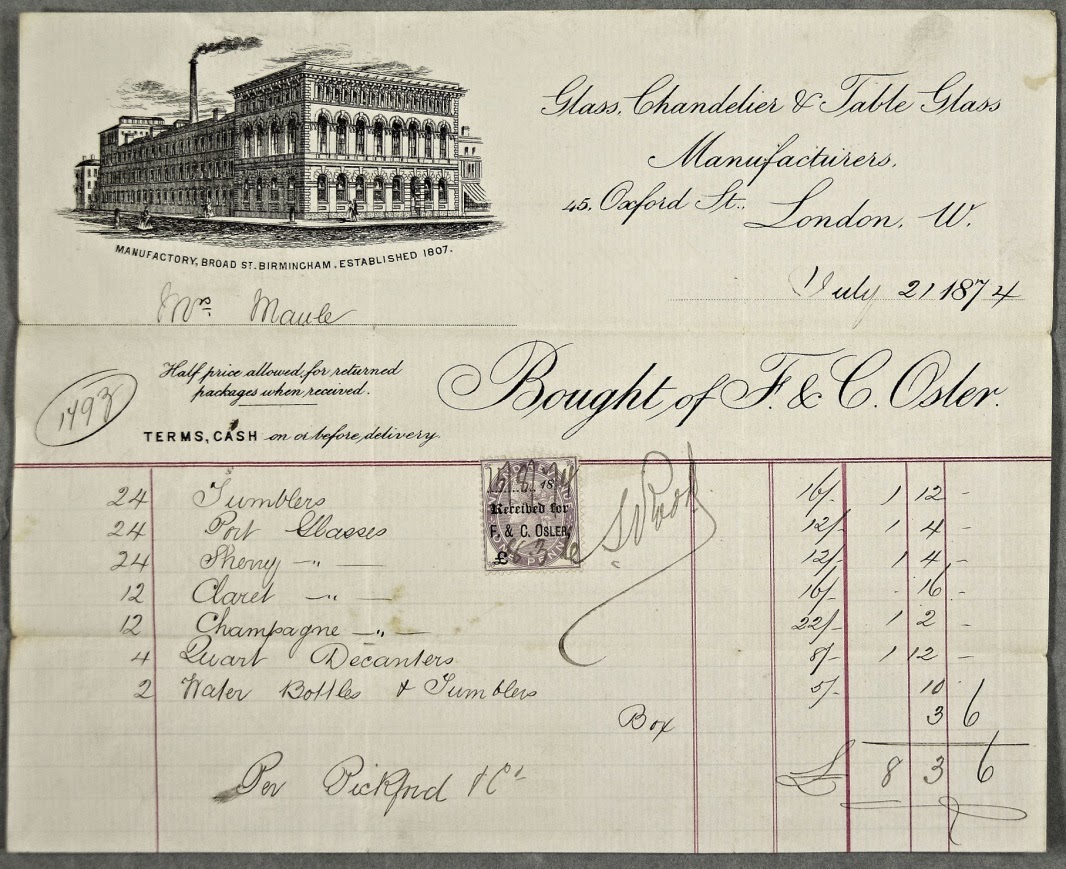 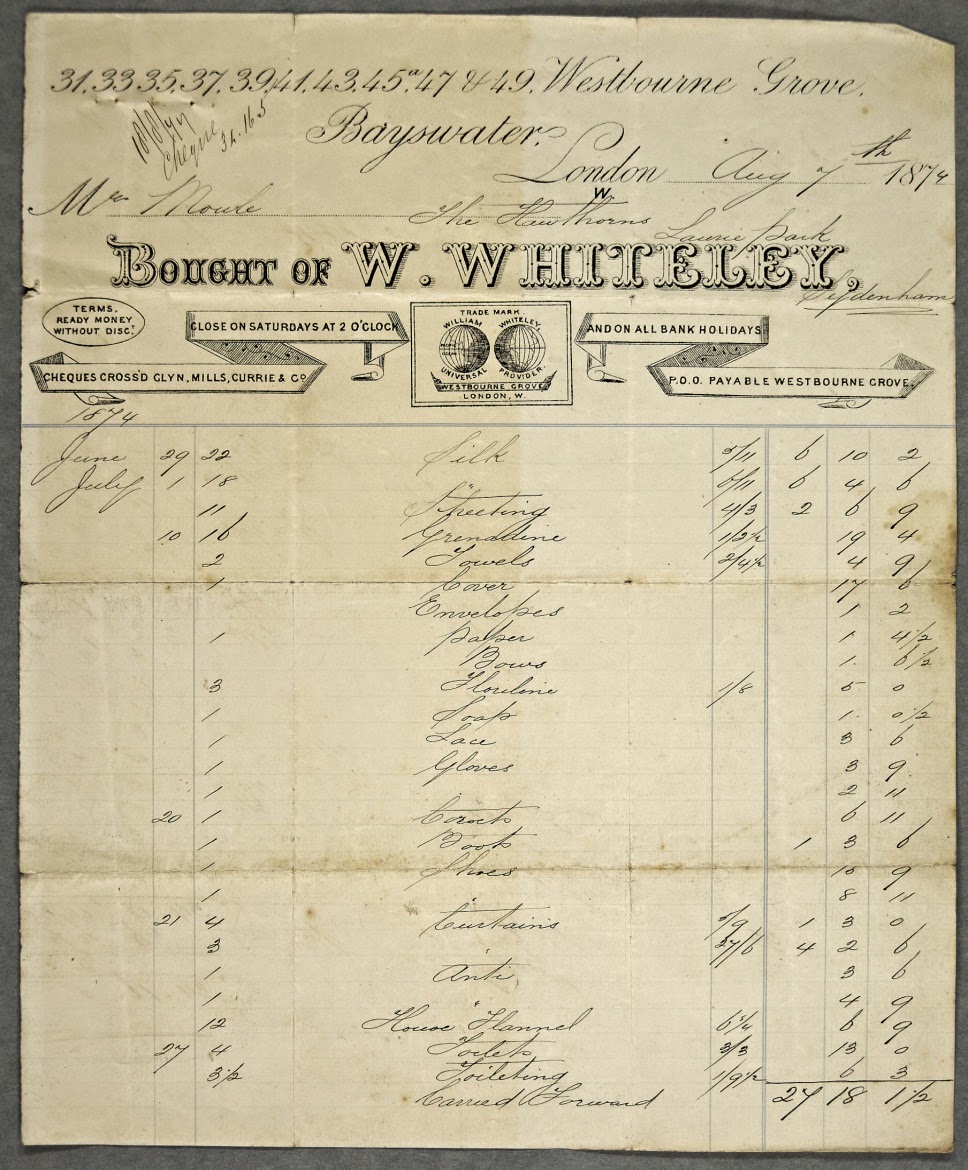 In late 1893 Frederick travelled to Paris, Genoa and Italy.  It’s unclear why he went, maybe it was on business, but he sent letters and sketches back to his wife and children describing the experience, including a visit to Pompeii.  As he walked around ‘the City of the Dead’, he almost expected the fountains to flow again with water and the town to spring back into life at any moment.  He also visited a dig in progress and mused that as only half the city was uncovered, it would take them 60 years to complete the work. 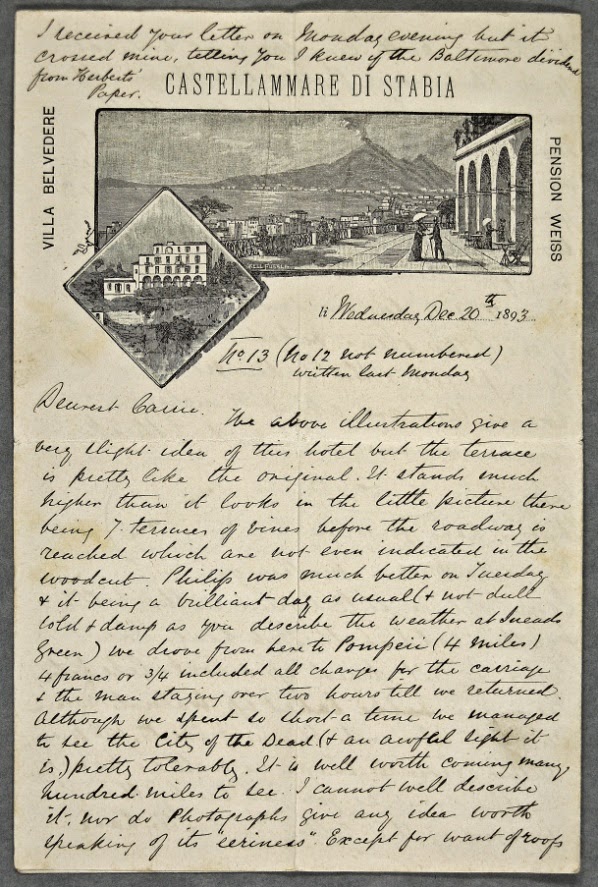 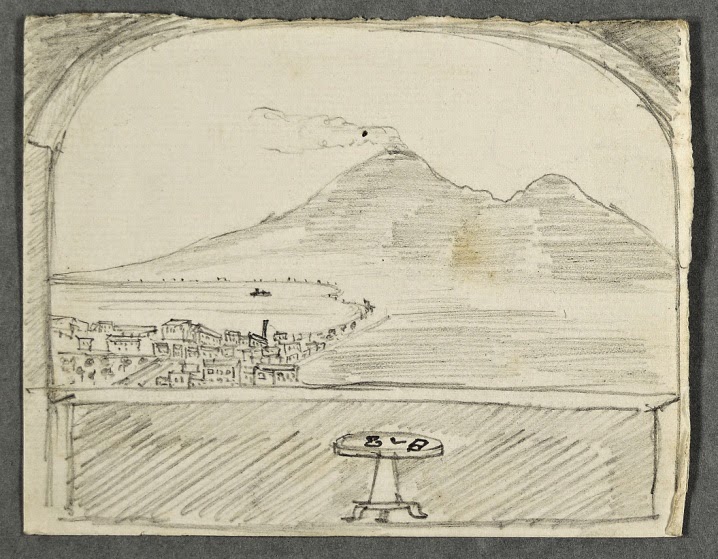 Visit to Pompeii and surrounding area 1893

Frederick mentions taking photos, but they do not appear in the collection, so if they survived, they were perhaps inherited by another branch of the family.

Frederick and Caroline’s daughter Loll (Laura Ellen) seemed to also be bitten by the travel bug.  1914 sees her writing back home to her mother (her father had died in 1909) while on board the SS Umzumbi and then from South Africa and Natal.  The letters give no immediate clue as to why she decided to go to South Africa and there is no immediately discoverable family connection.  The letters include accounts of a fancy dress party on board the boat and visits to various sights of interest, battlefields and cemeteries associated with recent wars, the grave of Cecil Rhodes and one of the things she was most looking forward to – a visit to the Victoria Falls.  There are also descriptions a plenty of the various people she stays with and meets along the way.  She asks her mother to keep her letters so that she may read them herself upon her return.   The whole series do seem to have survived, so it is possible to follow Loll’s adventures and see the Africa of 1914 through her eyes. 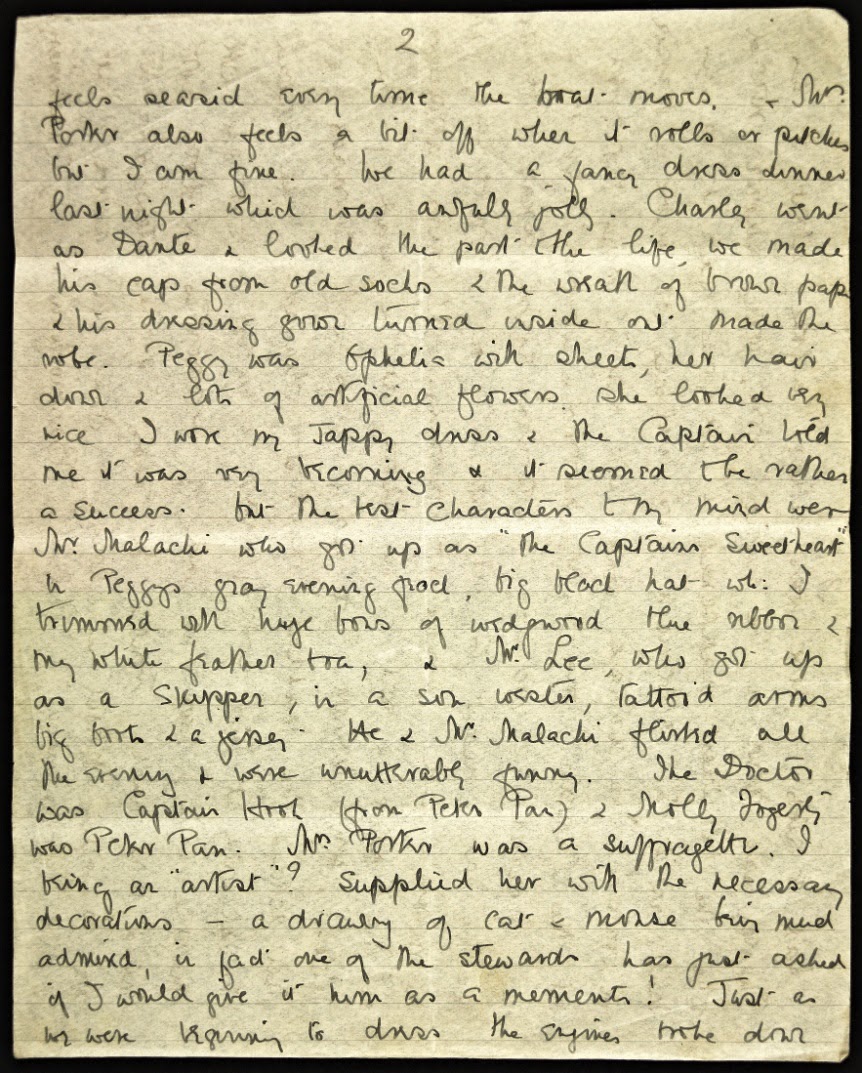 Description of the fancy dress party on board the SS Umzumbi

Loll’s final letters make reference to the ‘European War’ which has broken out while she was away in Africa and her anxiety and desire to get home as soon as she can comes out clearly in the letters.  She says that everyone is speaking of little else, the newspapers are bringing out ‘specials’.  The South African troops are ‘all on the qui vive’ and there are lots of ‘khaki clad men about’.  She finally arrives back in England in October 1914 on The Saxon.  Interestingly enough she seems to have returned to South Africa again at some point as the Ancestry database has a record of her returning to England  just ahead of the outbreak of the Second World War, but there are no records in the collection about that trip. 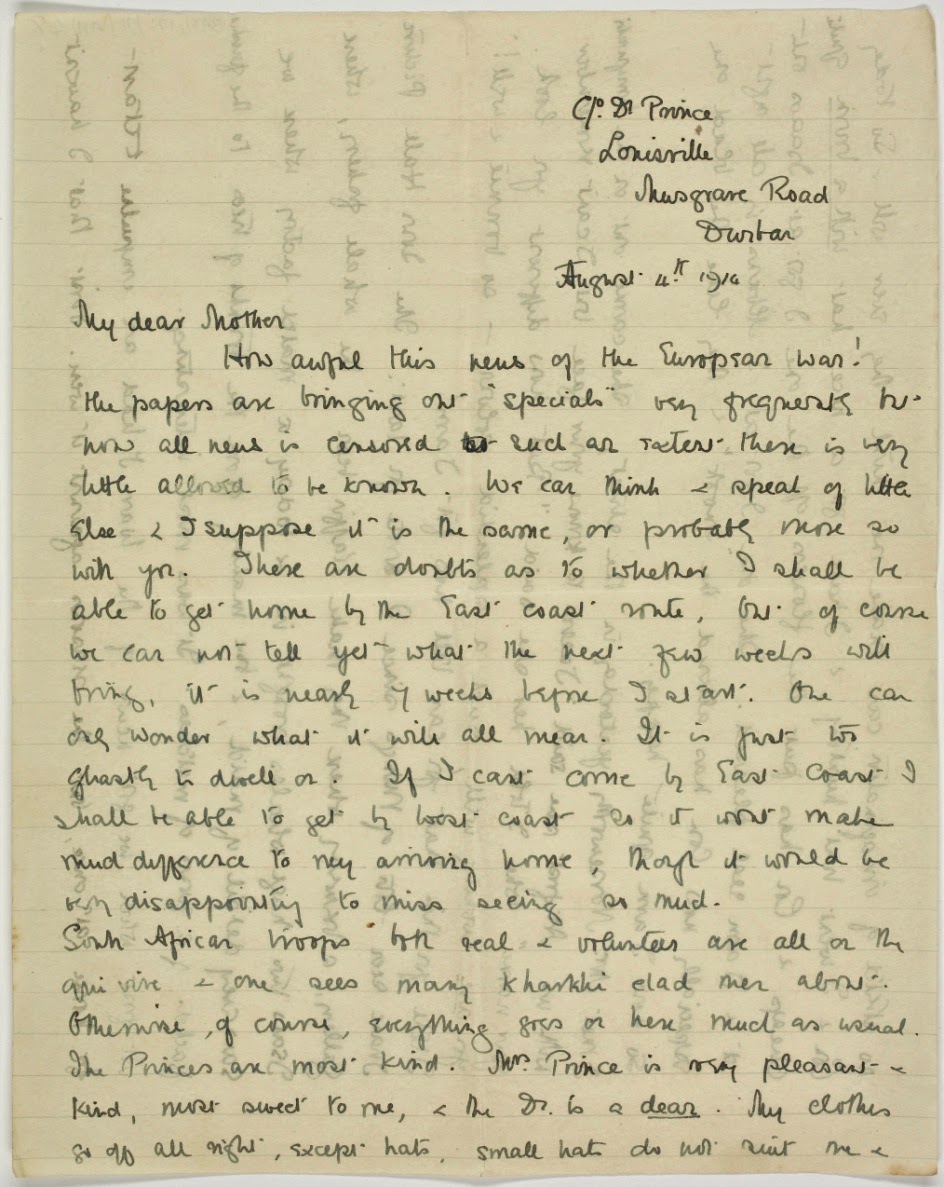 These are just a few of the many fascinating papers the Moule family of Sneads Green have left behind to provide a window on their lives and times, their thoughts and opinions.  Other sources which were not available when I catalogued the collection twenty years ago, such as genealogical information from Ancestry, now provide the collection with much more of a framework to set the records in context.  I still see something new each time I revisit the collection and maybe as more and more collections appear on line, somewhere out there in another record office there may be other papers of the Moule family, just waiting to be discovered to complement our collection.