To commemorate the 800th anniversary of Magna Carta, and the 750th anniversary of the Simon de Montfort parliament, we have put together a display of original 13th-century documents on level 2 of The Hive.  This complements the Magna Carta and Parliament exhibition on our Touch Table, which features images from the Parliamentary Archives. For those of you unable to pop along and view the documents, we have reproduced them here.

When we imagine Worcestershire’s experience during the struggles of the 13th century, our thoughts are dominated by King John’s burial in Worcester Cathedral and Simon de Montfort’s defeat at the Battle of Evesham in 1265. Such famous events are only one aspect of 13th-century Worcestershire. Powerful people who participated in the dramatic events of the day—including the framing of Magna Carta and the civil wars which followed—had surprisingly local connections. But as national events played out, the county’s wider population experienced significant change. 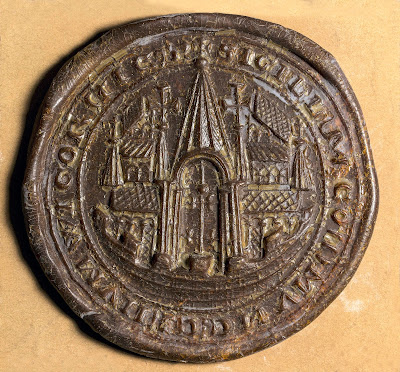 (1a) Impression of an ancient Common Seal of the Citizens of Worcester. C.12-13th Century.  The seal, which features a church surrounded by a wall with battlements, would have been used in the execution of deeds and official documents.  Ref. 899:1775/BA 15663

Our documents explore two themes: the changing status of the City of Worcester, and the rights granted by kings to local religious houses; and how the systems of justice and taxation affected ordinary people. They show that despite the fundamental democratic milestones represented by Magna Carta and the advent of Parliament, certain groups continued to face challenges in their struggles for liberties and justice.

King John is famous for one charter, Magna Carta, but issued thousands of others during his reign. To those who received them, they were valuable documents granting lands, titles or liberties that increased power and profit. To John and other kings they were a vital source of income, and a tool to reward loyalty. 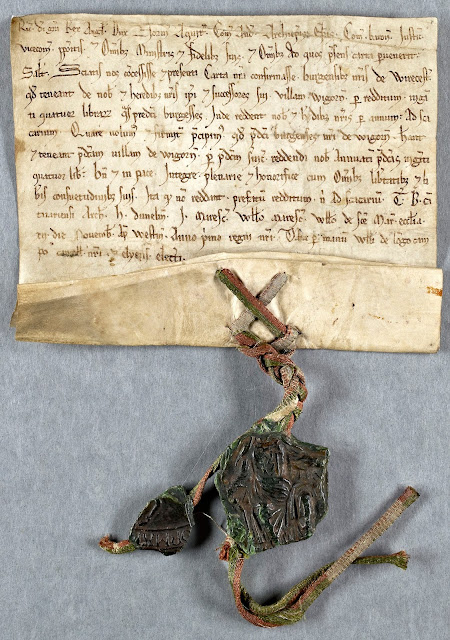 Charters 1 and 2 were issued by King John’s older brother, Richard I, and John’s son, Henry III, to the citizens of Worcester. Towns improved their economic and legal status through such grants, and signified their corporate identity by adopting a common seal (1a). Towns hoped to protect their liberties through Magna Carta, and some, like Worcester, even sided with the barons in the fight against John in 1216. 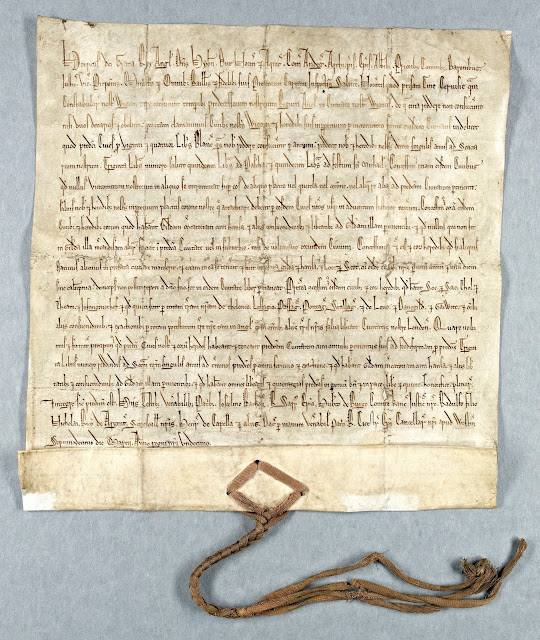 John taxed Worcester heavily throughout his reign and Magna Carta did not, in the end, protect towns from high taxation or rent. Nonetheless, Worcester, like other towns, became increasingly independent and assertive during the 13th century, especially after Henry III granted its citizens a guild merchant (monopoly over trade) and freedom from the sheriff’s interference in legal pleas. This led to towns’ growing participation in the political process, culminating in Simon de Montfort’s parliament of 1265.

Simon de Montfort, earl of Leicester and the king’s brother-in-law, was the leader of the rebellion against Henry III’s rule. He defeated Henry and his son, Lord Edward, at the Battle of Lewes in May 1264, taking Edward captive. Montfort summoned a parliament to discuss Edward’s release, as well as peace and general government reforms. He knew that his military coup and seizure of government was risky. Montfort ruled without the king’s consent, and was not supported by all the barons. He therefore built up a broad base of support by including county knights and representatives from the towns in the discussions. This is considered a landmark in the development of Parliament, because it was the first time knights and townsmen had been invited to treat on general issues of importance to the realm, rather than merely to agree to the king’s request to raise funds through taxation.

Charters 3 and 4 are copies of grants and confirmations of land and privileges from King John to two Worcestershire abbeys, Pershore and Halesowen. By the time of Magna Carta, the Church had gained vast lands and liberties worth defending from royal abuse of power. King John spent much of his reign quarrelling with the Church, interfering in its governance and taxing it heavily. Following the Papal Interdict of 1208, which forbade sacraments throughout England, and John’s own excommunication the following year, the king retaliated by confiscating Church property, including that of religious houses. John’s treatment of the Church inspired more than one Magna Carta clause.  However, John continued to issue charters to religious houses, particularly those loyal to him. The Halesowen charters (4) include the gift of the manor of Hales to Peter des Roches, bishop of Winchester, allowing him to found a religious house. Roches was a loyalist who supported John during the Interdict and later during the First Barons’ War which followed John’s failure to abide by Magna Carta. Roches’ appointment as Chief Justiciar of England (king’s chief minister) was unpopular with the barons, who considered him to be one of John’s “evil counsellors”. 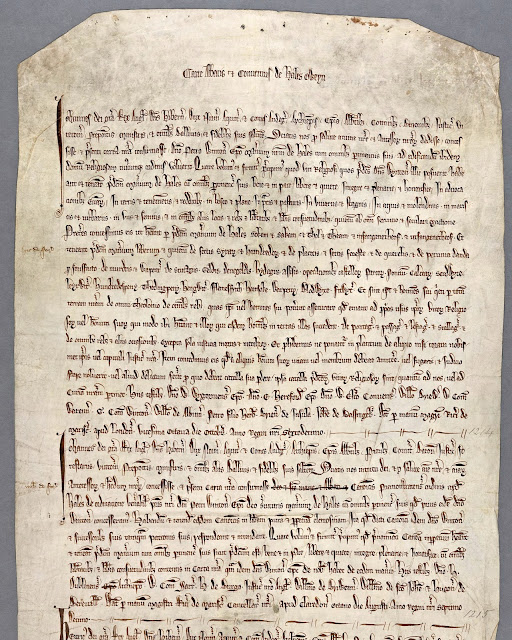 Part 2: Taxation, Law and Order, Women, Peasants and the Jews

King John has become notorious, not least through the Robin Hood legends, for his arbitrary taxation and seizure of property. One of the cornerstones of Magna Carta addressed this, insisting that no taxation be granted without the general “consent of the realm”, paving the way for the future Parliamentary system.

An exception to the requirement for consent was the Jews. They were important to kings because unlike Christians, Jews could practice usury (lend money at interest), and were therefore a source of credit. Anti-Semitism combined with resentment towards those who provided money lending services meant that Jews were frequent targets of violence. They enjoyed protection as wards of the Crown, but in return, kings could exact whatever taxes they liked from them, at any time.[1] Since the king profited from Jewish loans and taxes, John’s baronial opponents came to mistrust Jews as royal agents. Thus Magna Carta did not protect Jews from taxation and seizure of property. Instead, since many barons were heavily in debt to Jews, the Charter limited the liability of debtors.

As the reign of John’s son, Henry III, progressed, extravagant spending on his court, patronage and wars resulted in increasingly aggressive taxation and confiscation of Jewish property.[2] Our document is an undated writ (5) from Henry’s reign dealing with taxation of Jews in Worcestershire and Herefordshire. Worcester was one of about 25 locations of archae, record chests where evidence of Jewish transactions was stored.[3] The writ orders the inspection of these charters for evidence of goods, lands and rents belonging to Jews, and specifies Jews who were to be taxed. Once again, Jews were viewed as allies of the unpopular king and resented by baronial debtors. So strong was the barons’ antipathy that in 1263, Worcester’s Jews were attacked by Simon de Montfort’s men during the Baronial Wars against Henry III. We must remember that this father of British democracy was very much a man of his time. Modern conceptions of human rights were still very far in the future.

As we have seen, the Simon de Montfort parliament of 1265 was a democratic milestone because it included the commons—representatives from the shires and towns. Edward I, King John’s grandson, continued this tradition, accepting the principle of Parliamentary consent to taxes to fund warfare in Wales, France and Scotland. At Edward’s first parliament of 1275, he faced demands for relief from debts owed to Jews. After a century of punitive taxation and legislation, the Jews could no longer provide Edward with the revenue he required. In return for Parliamentary consent to a tax, he agreed to ban Jews from lending money at interest, effectively preventing them from earning a living, and paving the way for their expulsion from England in 1290.[4] 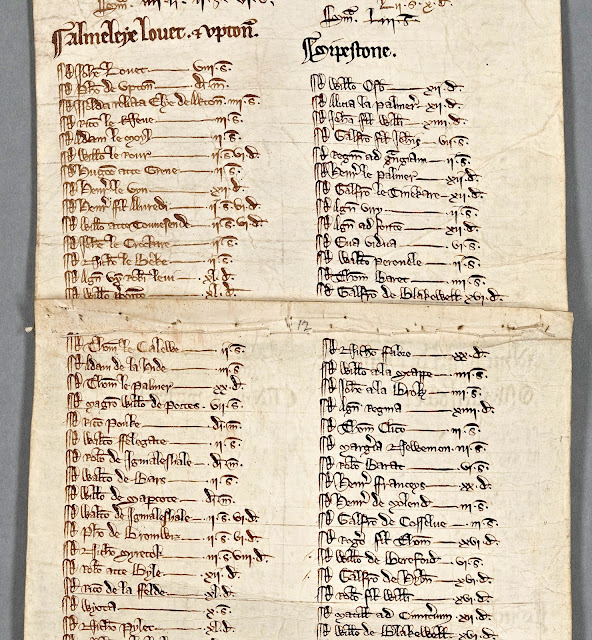 Our taxation roll (6) is probably an example of the tax granted to Edward in return for the ban on usury in 1275.[5] Despite the unfair circumstances under which it came about, it provides a snapshot of Worcestershire, hinting at the size and wealth of settlements and types of trades practiced within them. It also shows that many women owned property and were taxed alongside men. Magna Carta protected the inheritance rights of noble heiresses and widows, and ensured that kings could no longer force widows to remarry. Although Magna Carta was not intended to increase the rights of ordinary women, it set a precedent for the protection of women’s property and marriage rights.

Although medieval kings governed and taxed England through sheriffs and other officials at the county level, the smallest unit of government was a private administrative unit with its own private court: the manor. Magna Carta does not have much to say about the majority of people who lived on manors, the unfree or villein class, those who were tied to the land and laboured for the lord of the manor. Magna Carta protected them from the interference of royal officials and from unreasonable fines, but not from being exploited by their own lords. Denied access the king’s justice in the common law courts, they were required to use the manor court of their lord.[6] Manorial records are thus an important source for the lives of people who faced an uphill battle in their desire for liberty. 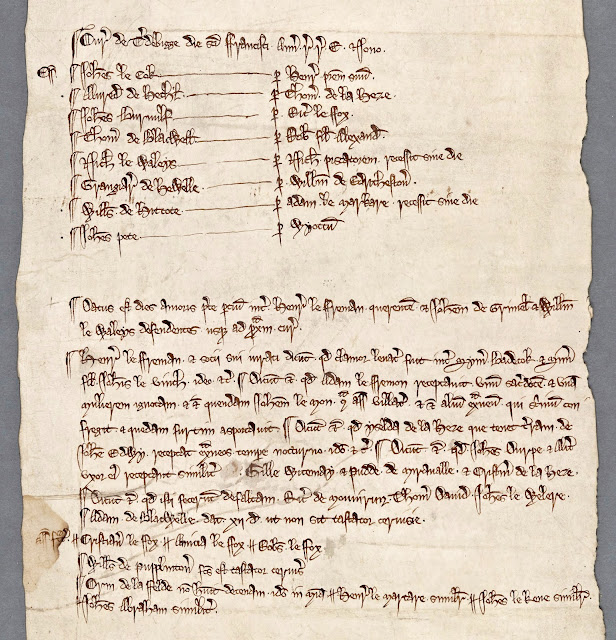 Our final document is a court roll from the manor of Tardebigge, showing an entry from 1281 (7). Tenants took disputes before the court, and the jury imposed fines on those who violated local bylaws and national assizes regulating the measure and quality of bread and ale.[7] It shows women active in the local brewing industry and men and women alike being punished for offences like harbouring strangers at night! The roll dates from a time when rising population and economic conditions meant that manorial tenants were trying to gain more freedom. Lords, while still asserting control over peasants, began to commute labour dues to cash payments. Despite the democratic advances of Magna Carta and Parliament, it would take the Black Death and other upheavals of later centuries before most inhabitants of manors—including women—would gain significant advances in their status.

[1] Jews paid a large proportion of Richard I’s ransom when he was captured on his way home from Crusade, for example.

[2] Worcester was the scene of one of the most infamous exactions.  Jews from all over England were summoned there to a “Parliament of the Jews” in 1241, only to find that Henry intended to levy a tax of about a third of their property.

[3] This system had been implemented as a result of mob violence which had destroyed Jewish records during Richard I’s reign.

[4] 1275 was a bad year for Jews for another reason: at the request of Edward’s mother, Eleanor of Provence, who held Worcester and other towns as part of her dower lands, Worcester’s Jews were deported to Hereford.

[5] It is an early example of a subsidy (tax on income moveable goods).

[6] Unfree peasants were thus essentially excluded from the famous Magna Carta clause 40, “To no one will we sell, to no one deny or delay right or justice”.

[7] This is in line with Magna Carta clauses and later statutes stipulating that fines should be assessed by local men, and standardising weights and measures.