For many World War II ended with VE Day in May 1945.  For others, such as the 2nd and 7th Battalions of the Worcestershire Regiment serving out in the Far East, the War would not be over until August 1945.  After some days of rumour and speculation the news broke that the Japanese had finally surrendered on 14 August.  15 August was designated ‘VJ Day’, Victory over Japan Day, though the official surrender was not signed until 2 September.  Prime Minister Clement Atlee confirmed the news in a broadcast and King George VI addressed the nation and Empire from Buckingham Palace.  The end of the War was marked by a two day holiday.  Like VE Day people crowded onto the streets singing, dancing, lighting bonfires and letting off fireworks. 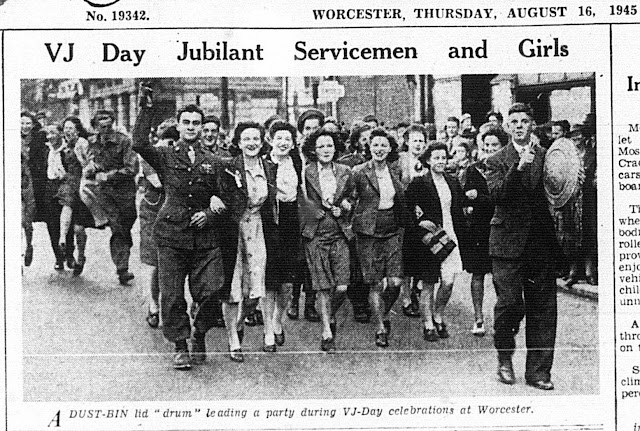 Recollections of VJ Day Several Worcestershire residents interviewed back in the 1990s about their recollections of World War II recalled where they were on VJ Day and the celebrations in which they were involved.  The following are a small selection of those memories.

The War is over Miss Griffiths, a teenager during the War, was working at a gas show room on VJ Day.  She recalled hearing the rumours that the war was over, waiting for the official announcement and celebrating the end of the War with a group of American soldiers based nearby.

The headline of Worcester News and Times, 15th August 1945

A subdued affair? For some interviewees VJ Day was a much more subdued affair than VE Day.  The general election had been held, a new government was in power and many people had already begun to move on with their lives when the end of the war came round.  For some such as Barbara, a child in Birmingham during the War, VJ Day was ‘nothing compared with VE Day’.  Her family did not have anyone serving out in the Far East so it did not have the same impact.  For others serving in the forces it was very much business as usual.  Jean, serving as a Wren, had just been posted to the Isle of Man to cover the work of others due to go out to the Far East when peace was declared.  She recalled hearing the news with her fellow Wrens.

Parties and celebrations Gordon, a child in Worcester during the War, remembered ‘the bunting and Union Jack’s everywhere’ and ‘a great relief, the whole thing’.  Betty, a child living in Birmingham at the time, recalled that she went over to her future mother in law’s and they had ‘a party in the road’.  A young nurse, whose visit back home from training coincided with VJ Day, recalled the celebrations in Wolverley vividly.  Her recollections included a bonfire, fireworks and a touch of food poisoning from a dodgy pork pie! 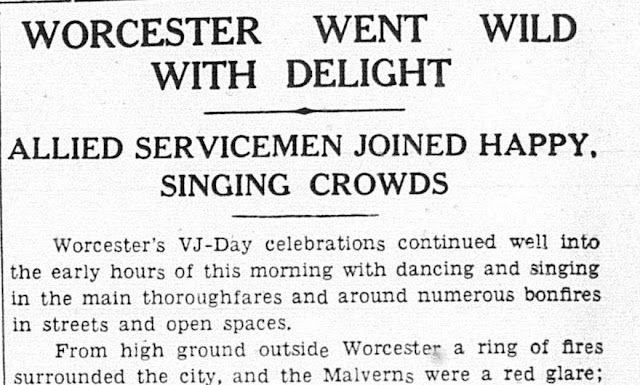 You can read transcripts of all of the oral history interviews featured here.

For more information about VJ Day and the 70th anniversary commemorations see: