Explore Your Archive: Sir John Pakington and the Purchase of Wigs

The word wigs comes from “periwigs” which was the name of the particular long, curly wigs that became popular after Charles II was returned to the throne in 1660. They were used to simulate real hair and primarily used for adornment. However at the time, head lice were everywhere, and nitpicking was painful and time-consuming. Wigs stopped lice infesting people’s hair, which had to be shaved for the peruke to fit and the lice would infest the wig instead. Delousing a wig was much easier than delousing a head of hair: the dirty headpiece was send to a wigmaker, who would boil the wig and remove the nits.

Sir John Pakington became the 6th Baronet in 1748 the at the age of 26. Very little is known about his life only that he married at the age of 38 and died at the age of 40.In ‘The Pakingtons of Westwood’ by Humphrey and Richard Pakington it states ‘the only clue  – if such it can be called – to his character and appearance is the purchase of one of those elaborate French wigs…’ 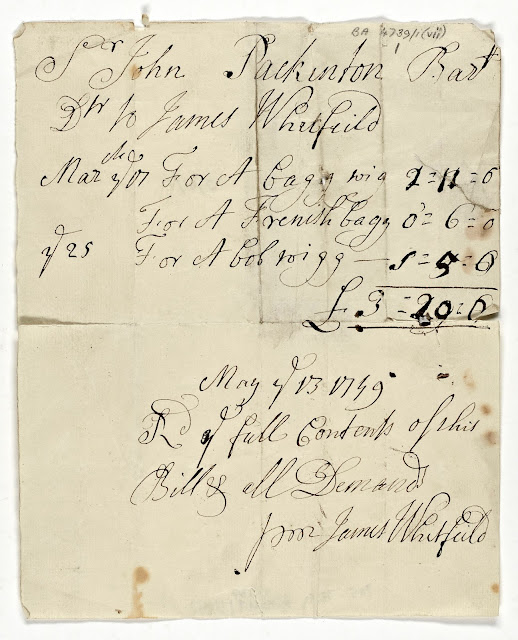 In England, bag wigs came into fashion around 1730. It was claimed that this type of wig had originated in France. French servants would apparently tie their hair back into a leather bag to keep it off their face when serving, it was not deemed appropriate to have free flowing hair.

Bag wigs got their name because they were exactly that, a bagged wig. In England, the long hair at the back of the wig was placed in a black silk bag. Then the ribbons attached to the bag were pulled to the front and tied in a bow.

The other wig mentioned in Sir John Pakington’s bill is the bob-wig. This also became popular in the 1700s, arriving in England during George II’s reign. What made this wig popular was its apparent resemblance to real hair and was mostly worn by the general public. The best examples were made from natural hair, however horse and goat were used as a cheaper alternative.

In 1795, the British government levied a tax on hair powder of one guinea per year. This tax effectively caused the end of the fashion for wigs.