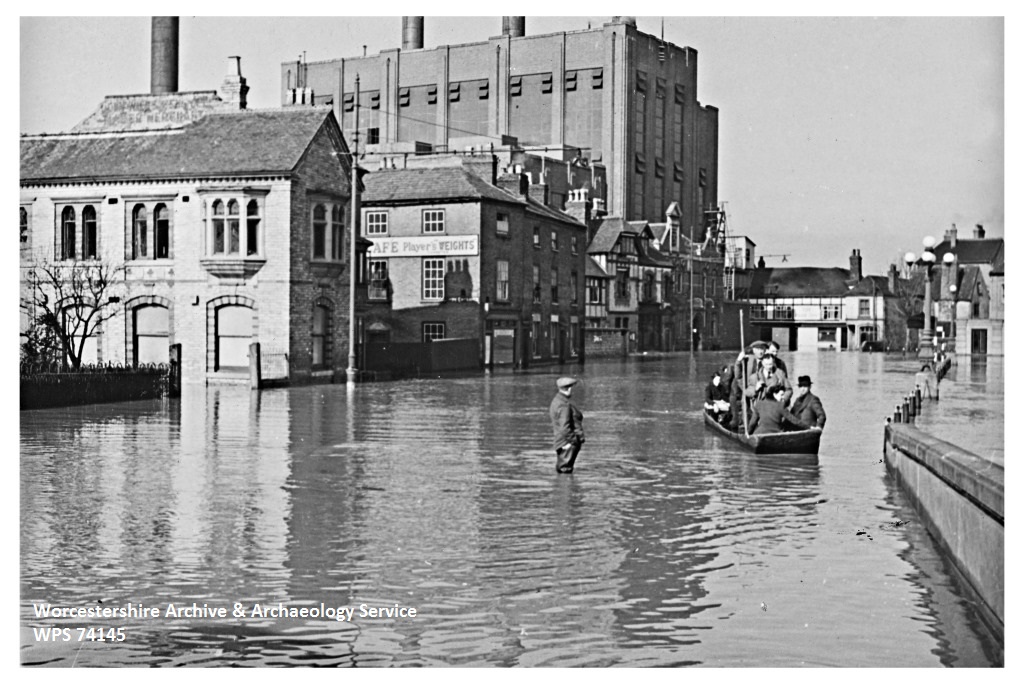 Floods on Hylton Road with the power Station in the background

It is 70 years since the 1947 floods, which were some of the worst experienced in Worcestershire and the UK. Floods are a regular natural phenomenon to this area and most people can recall particularly high ones, most recently 2007 and 2014. The 1947 ones were exceptional and are often still talked about.

The cause lay in the preceding months when a weather front more common to Scandinavia hit Britain for a couple of months. In February the temperature never rose above 0.7ºC, and there were frequent snow falls. During the Harvesting the Past project which interviewed people in the Martley area of the county, a number of people told us of their memories of that terrible winter. In some cases they were cut off for weeks, and one man said he never went to school for 6-8 weeks as there was no way to get there from his farm. Keeping livestock alive during that period was a struggle for the county’s farmers.

In early March warmer stormy weather hit southern England causing a thaw. This then slowly moved northwards. As the thaw reached the Midlands the snow melted into the rivers, filling them up with the accumulation of the past couple of months. It was exacerbated by a storm, followed by rainfall way above the March average, putting even more pressure on the rivers and sodden land. 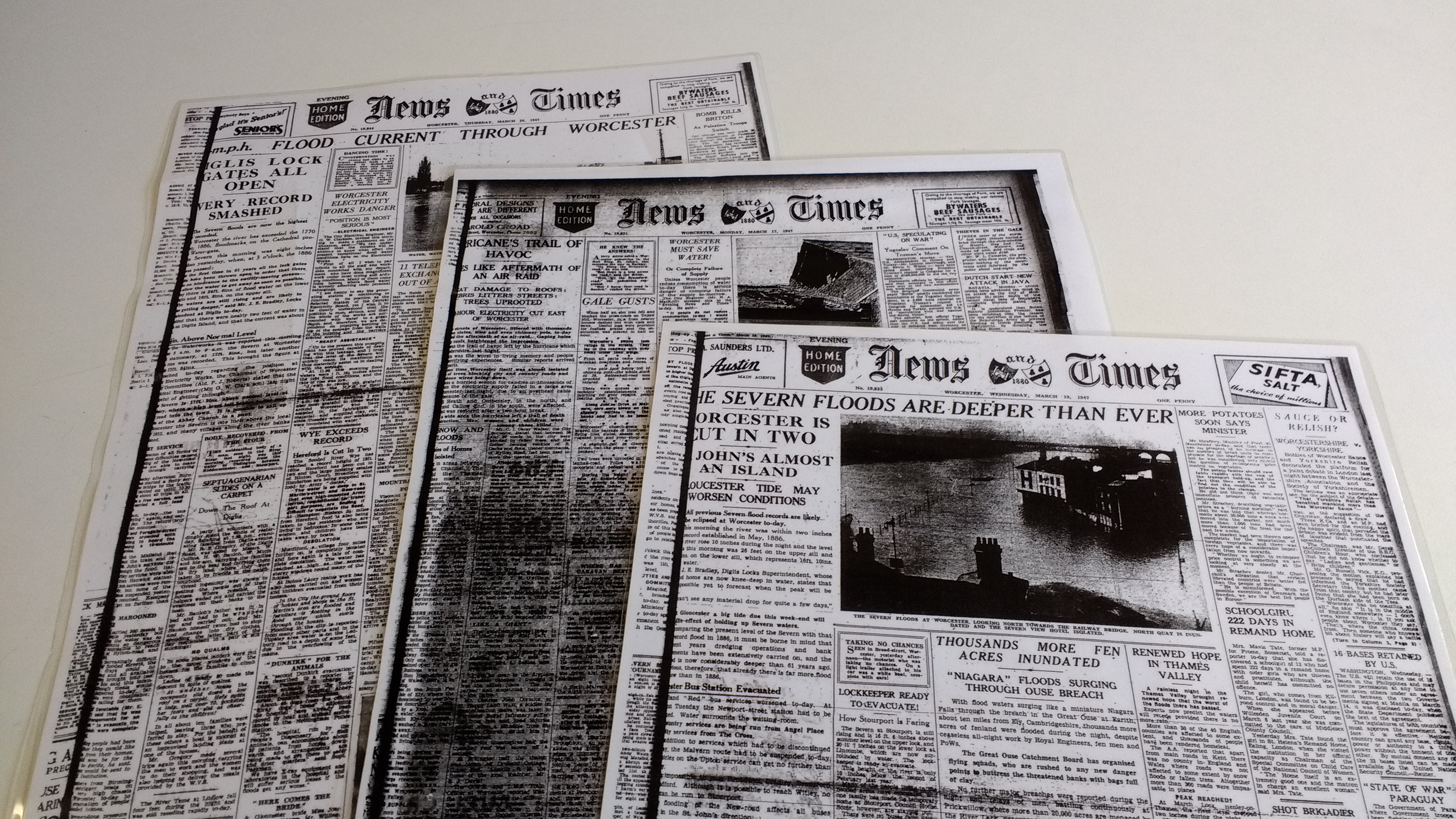 The newspapers (viewable on microfilm here in The Hive) tell the dramatic story. They are fascinating to read, and in many ways reflect what newspapers today are looking for as they look to include the offbeat in amongst reporting the serious news. They start with the storms of 16/17 March. Just a couple of years after the end of the war they describe the scenes as like the aftermath of an air raid as slates, tiles and chimney pots were scattered across the streets. Trees were blown down and roads blocked including Tallow Hill, where enterprising residents helped clear an Elm tree blocking the route whilst helping themselves to wood for their fires! Builder’s merchants saw long queues as people rushed to make repairs before more rain arrived.

The floods continued to rise, and on 19 March it was reported that the waters had almost topped the records, and it was feared a big tide in Gloucester would make things worse. Worcester Bus Station on Newport St had to be evacuated when the waiting room was surrounded by water, although the destinations for buses were already extremely limited. Lock keepers at Diglis and Stourport prepared to be evacuated. By the 22nd March many records were being broken, and the army were being brought in to help. 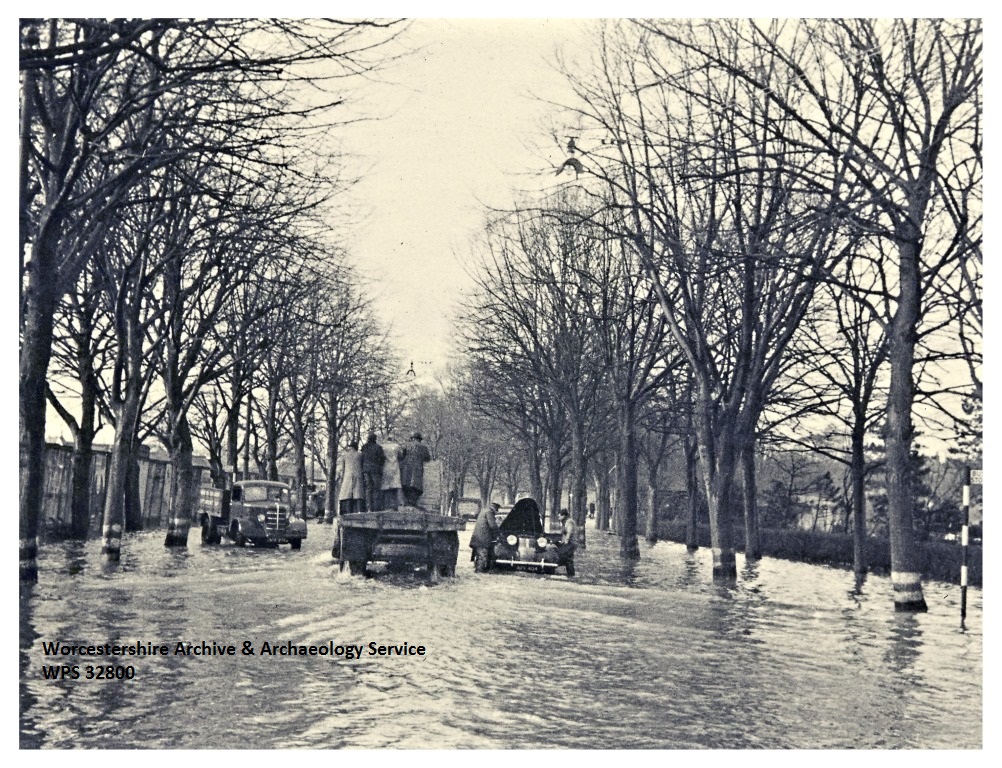 “Water water everywhere, nor any drop to drink”

Perhaps surprisingly considering the sheer amount of water, Worcestershire people were told to save water. The Worcester City Engineer reported that the floods made it difficult to supply water, as their filters struggled to cope with the volume. They were also not helped by the burst pipes from the frosts and half a million gallons of water were being lost this way.  Despite this there was no change in usage, and they even sent out vans with loudhailers asking the public to cut back on water. Electricity carried on with the help of pumps and a lot of assistance. It was also a challenge for workers to get in to work to keep it going. Unfortunately telephone exchanges were not so lucky, and parts of the county around Evesham found themselves cut off.

In Bewdley the gas supply was stopped when water flooded the gas works. To cross the river people had to negotiate a bridge of planks. Those who had been evacuated from around the town, if they had no friends of family to put them up, were accommodated in the school hall. In Tenbury the floods had affected most of the town and the church was an island, with the surrounding churchyard under water. The depth of the River Teme was hard to measure as the gauge was under water!

Newspapers always look for the unusual stories. One story described how a man managed to float to safety from his house on a door he had recently bought, and used as a raft. Another story described how an 80 year old woman slid down a roof on a carpet to a dinghy which had come to rescue residents in Diglis Avenue and surrounding streets. They also told of a lady who hadn’t quite grasped the serious of the situation, when she called for help from the emergency services to leave her home on Hylton Road, but the ’emergency’ turned out to be a dancing match she was keen to attend.

Another story which featured over several days in between the tales of disaster was the battle between Worcester Sauce and Yorkshire Relish. In London representatives from each county went to a railway station to debate which was better. The Chairman, the Director of BBC’s Children’s Hour, tactfully declared a draw at the end! 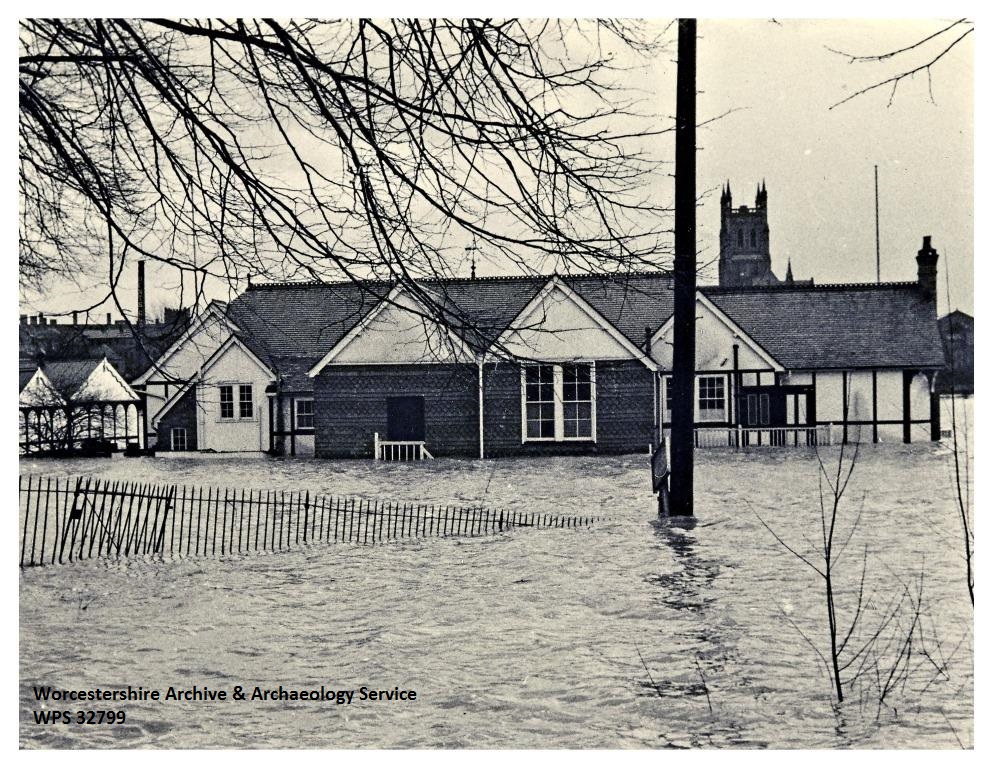 Sadly amongst the humorous stories there was also tragedy. Many were flooded out of their homes (hotels were full of evacuated people), businesses were affected, and livestock died where they couldn’t be got to dry land. There were also reports of a few people who had drowned in the floods.

We also have a number of photos in the archives of the floods. Despite their regularity ever time there is a flood there are plenty of people who come down to take pictures. Some of these make their way to us and help us tell the story of floods over the years. Everytime we feature them in talks or on social media they always get people talking.

As well as photographs, one man took film footage of the floods. John Beer was a keen amateur film maker. A number of years ago his films were passed to us, and were digitised by the Media Archive for Central England. If you have been to one of our archive film screening you may have seen his films of the floods (as well as others he shot of the visits of Winston Churchill & HM The Queen). Part of the film can be seen on the MACE website . Flooding is a fact of life for Worcestershire. Hopefully future ones won’t be as dramatic but they will continue to be recorded here.

Packing, bathing, miracles and crisis at the Malvern ‘Water Cure’

We are fortunate to live at a time when scientific understanding, technology and powerful medicines are available alongside an incredibly dedicated National Health Service saving countless lives against deadly disease every day. In the early 19th century, however, the link between what causes disease and Germ theory had yet to be established. Cholera, Typhoid and...