Have you heard of the word Silurian? Perhaps you heard it via the long-running British science fiction television series Doctor Who? The Silurians, a race of reptilian humanoids first appeared in the 1970 serial ‘Doctor Who and the Silurians’ to the Third Doctor, Jon Pertwee who claimed to have ruled Earth long before humans evolved. The Silurians have continued to appear in Doctor Who as late as 2014 with Vastra, a female Silurian warrior who was awakened from hibernation underground in the 19th century appearing regularly to help The Doctor, last so in the episode ‘Deep Breath’, the first with Twelfth Doctor Peter Capaldi. However, you may or may not also be aware that the Silurian is a period of Earth’s geological history, read successfully in the rocks of south Wales and the borders of England by the geologist, Roderick ‘Impey’ Murchison.

The Palfrey copy of Silurian System

Murchison established his ‘Siluria’ through careful researches into the ages and formation of the layers of rock in the Welsh borders producing ‘The Silurian System’ in 1839 – an original copy of which has been unearthed in our Palfrey collection (including Plates from ‘Murchison’s Siluria’) at Ref: LP 551.632. He named the system of rocks after the local native tribe Silures, who had resisted Roman conquest. The association of Silurian with deep time was therefore the perfect inspiration for a later Doctor Who story. Murchison would go onto describe the Devonian (with Adam Sedgwick) and Permian rocks (naming this rock system in 1841) through travels in south west England, the Rhineland and Russia respectively. ‘The Silurian System’ is an incredible 767 pages long, with 48 chapters illustrating some 656 fossils with beautiful wood cuts and sketches. 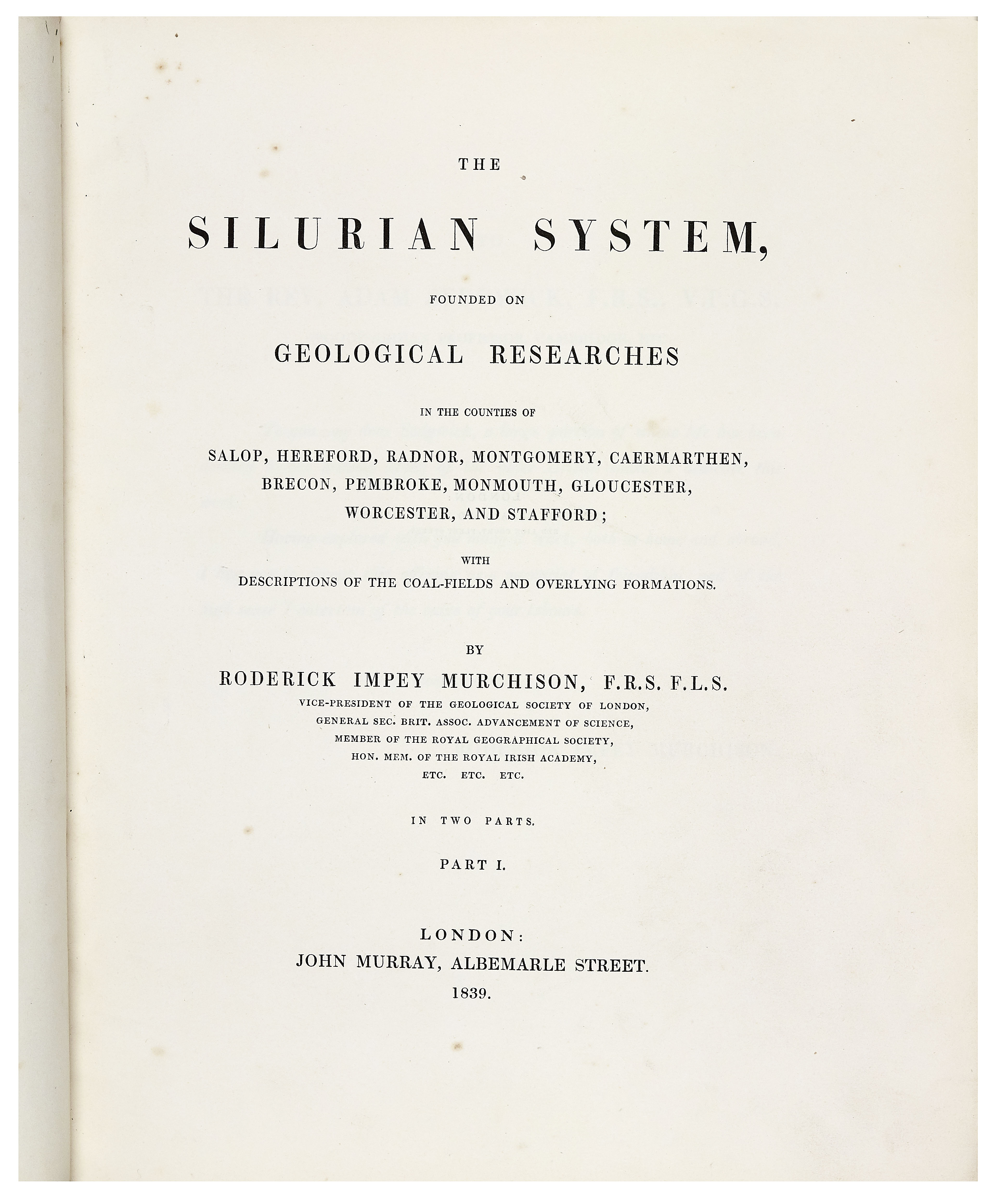 Murchison’s original ‘Siluria’ encompassed a period of Earth’s history from 544 – 410 million years ago which later became split into the Cambrian, Ordovician and Devonian periods. The volume not only explores the Silurian through careful study of the rocks of south Wales, including Worcestershire, Herefordshire, Gloucestershire and places such as nearby Ludlow but details evidence of the Carboniferous (through the Upper Coal Measures of Shrewsbury) and Old Red Sandstone of the Devonian period. Murchison’s travels throughout south Wales laid the foundation for the identification of Silurian rocks around the world. As far back as 1822, geologist William Buckland reported that fossil brachiopods and corals collected by British army officers and fur traders working in North America were equivalent to fossils from Dudley, England, as well as to those from the Swedish island of Gotland and the Baltic countryside of Estonia.

But what was the Silurian period (440 million years ago) like? Well, with discoveries of crinoids (sea-lilies), trilobites (ancestors of insects and crustaceans which became extinct at the end of the Permian period), brachiopods (animals that have hard “valves” shells, unlike the left and right arrangement in bivalve molluscs) and cephalopods (ancestors of today’s squid and nautilus) in the rocks – a picture of life in the seas can be painted. The climate was warm and stable with large amounts of carbon dioxide (4500ppm compared to 407ppm today) and the South Pole all but disappeared. Giant storms raged over a vast ocean, fed by warm waters. Bony fish and giant sea scorpions appeared and the first plants and invertebrates colonised the land at the end of the period. It is because of geologists such as Murchison that we can get a fascinating glimpse of what past life was like on planet Earth through the careful study of ancient rocks. 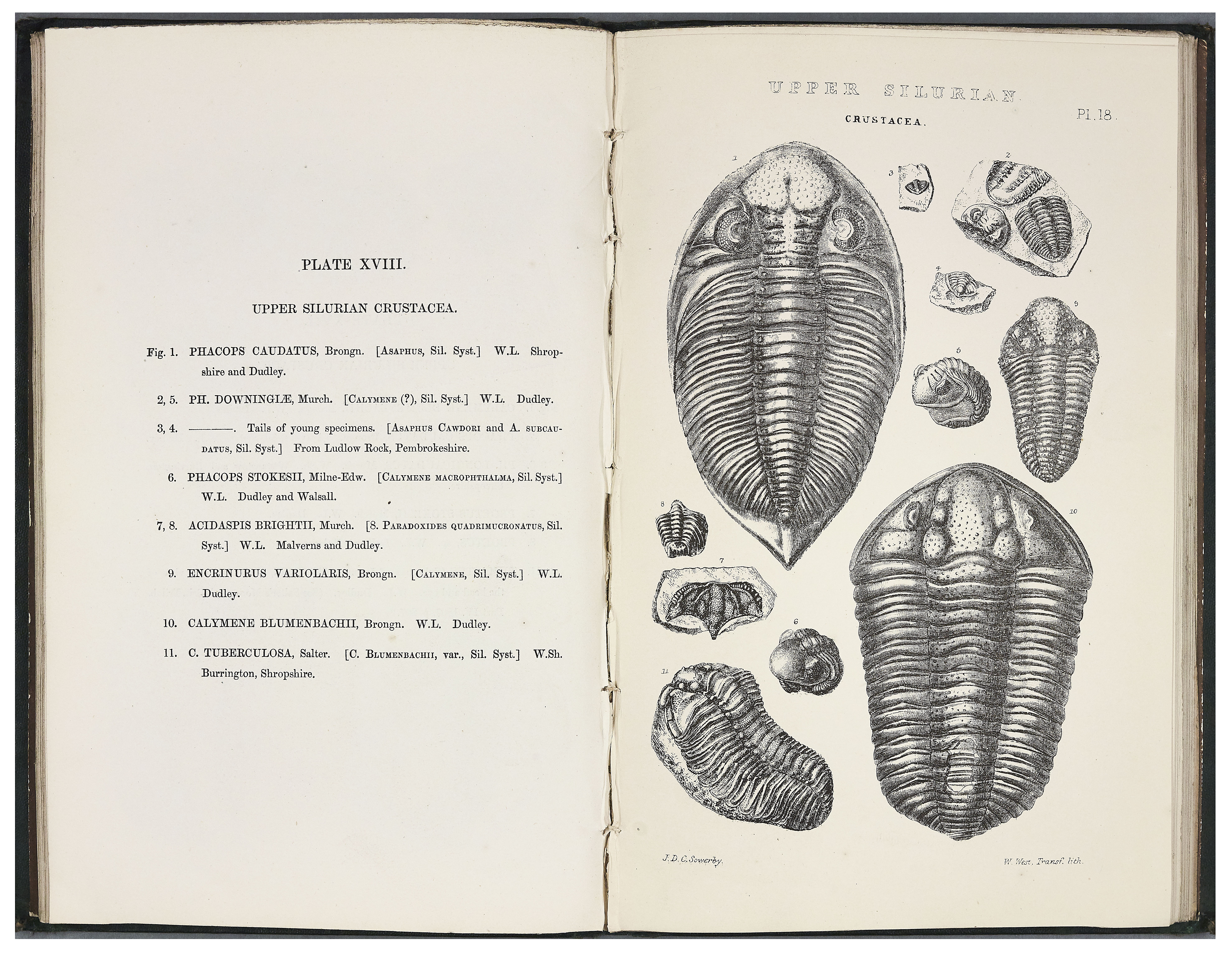 Plate 18 – Trilobites from the Upper Silurian collected in Shropshire, Dudley and Malvern

Murchison – a founder member of the Royal Geographical Society and President four times was knighted for his work in 1846. Despite his skill, dedication and aptitude for the science of geology, his wife Charlotte Murchison a brilliant geologist in her own right and friends with Mary Anning (and inspiration for a new film called Ammonite loosely based on their friendship released later this year with Kate Winslet) along with meeting Cornish chemist and inventor Sir Humphry Davy was instrumental in firing his passion for geology. As argued here by TrowelBlazers, without the amiable and accomplished Charlotte, it is doubtful whether Murchison, who had been more interested in fox-hunting when they first met, would go on to become one of the most celebrated geologists in history. Indeed, Charlotte’s sketches appear throughout ‘The Silurian System’ and Murchison’s first paper presented to the Geological Society in 1825 is thought to be a result of joint fieldwork with Charlotte. However, it is Murchison that is celebrated around the world with falls, towns, rivers, islands and even a crater on the moon, named in his honour! 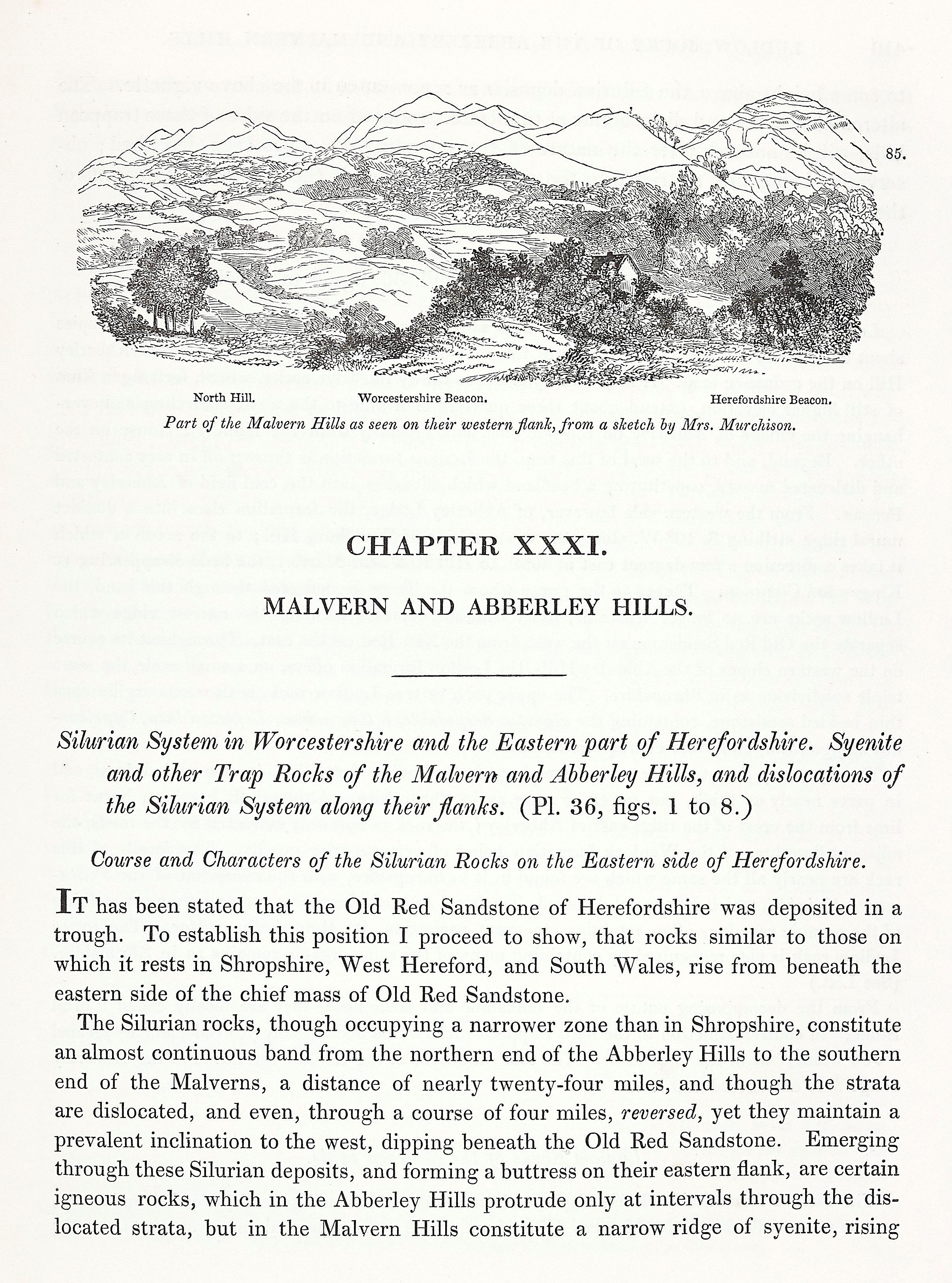 Chapter 31 showing part of the Malvern Hills as seen on their western flank, from a sketch by Mrs. Charlotte Murchison pp409

View from near Shrewsbury, looking from the west towards the east and south pp82 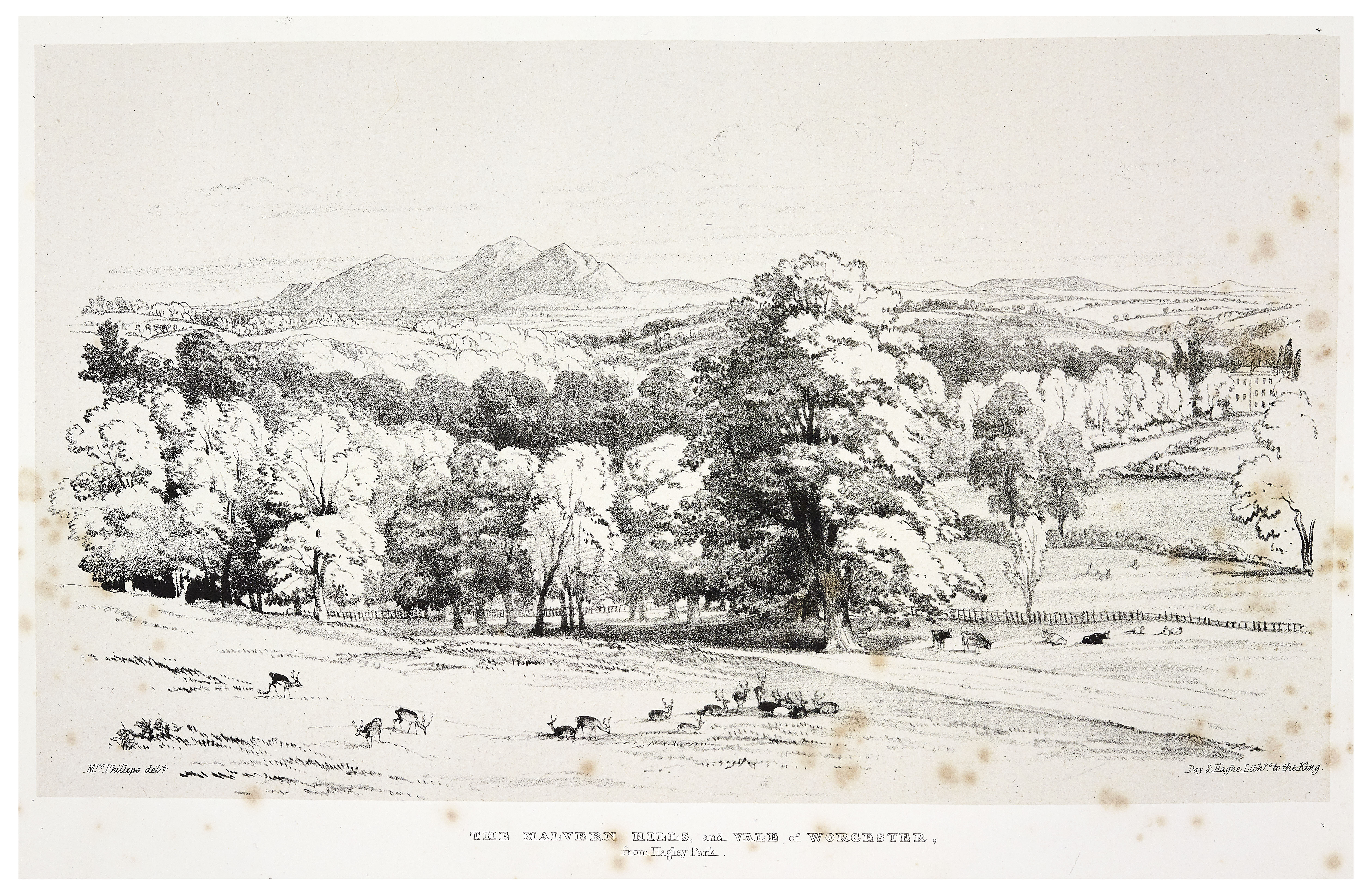 The Malvern Hills and Vale of Worcester from Hagley Park pp78 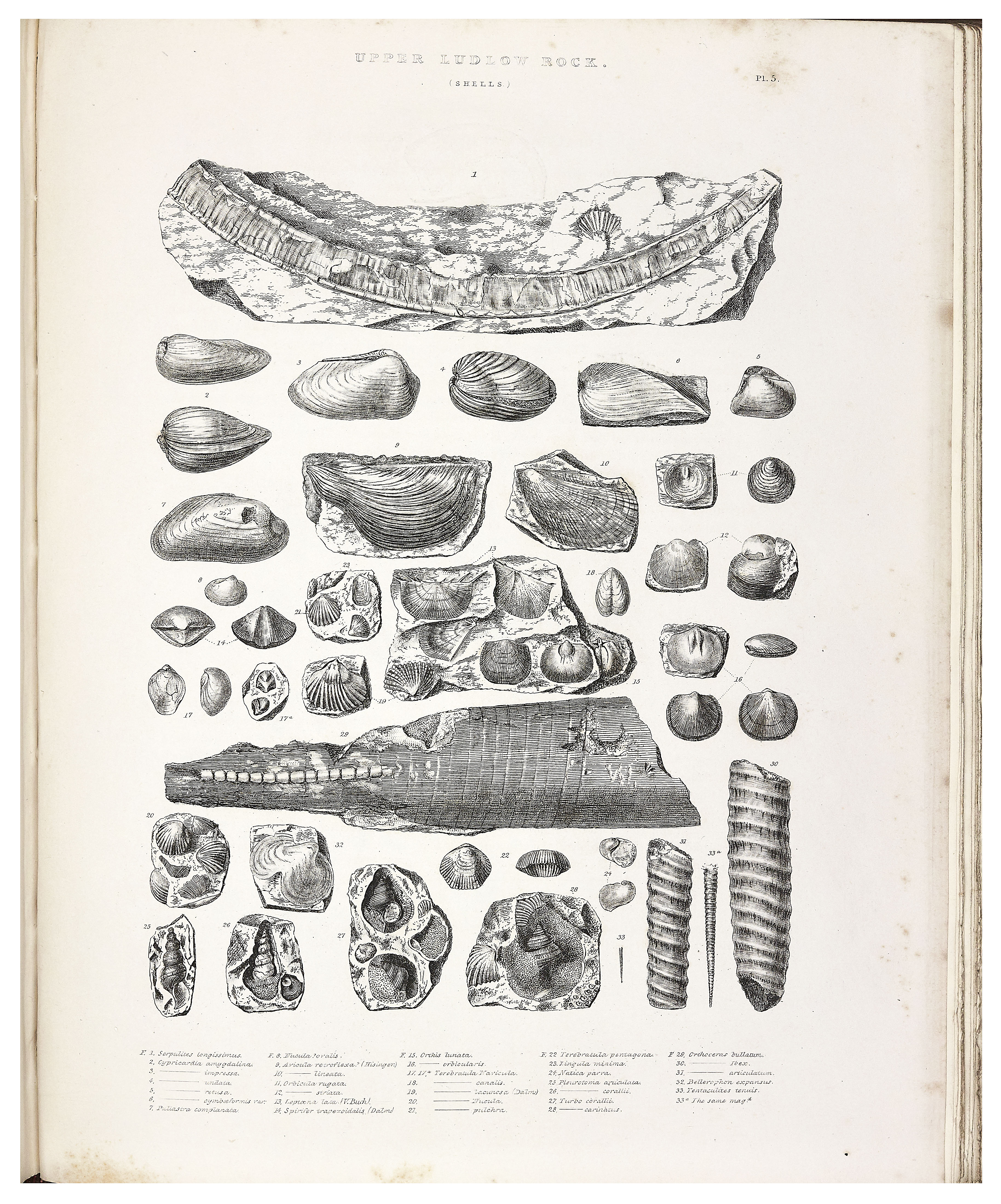 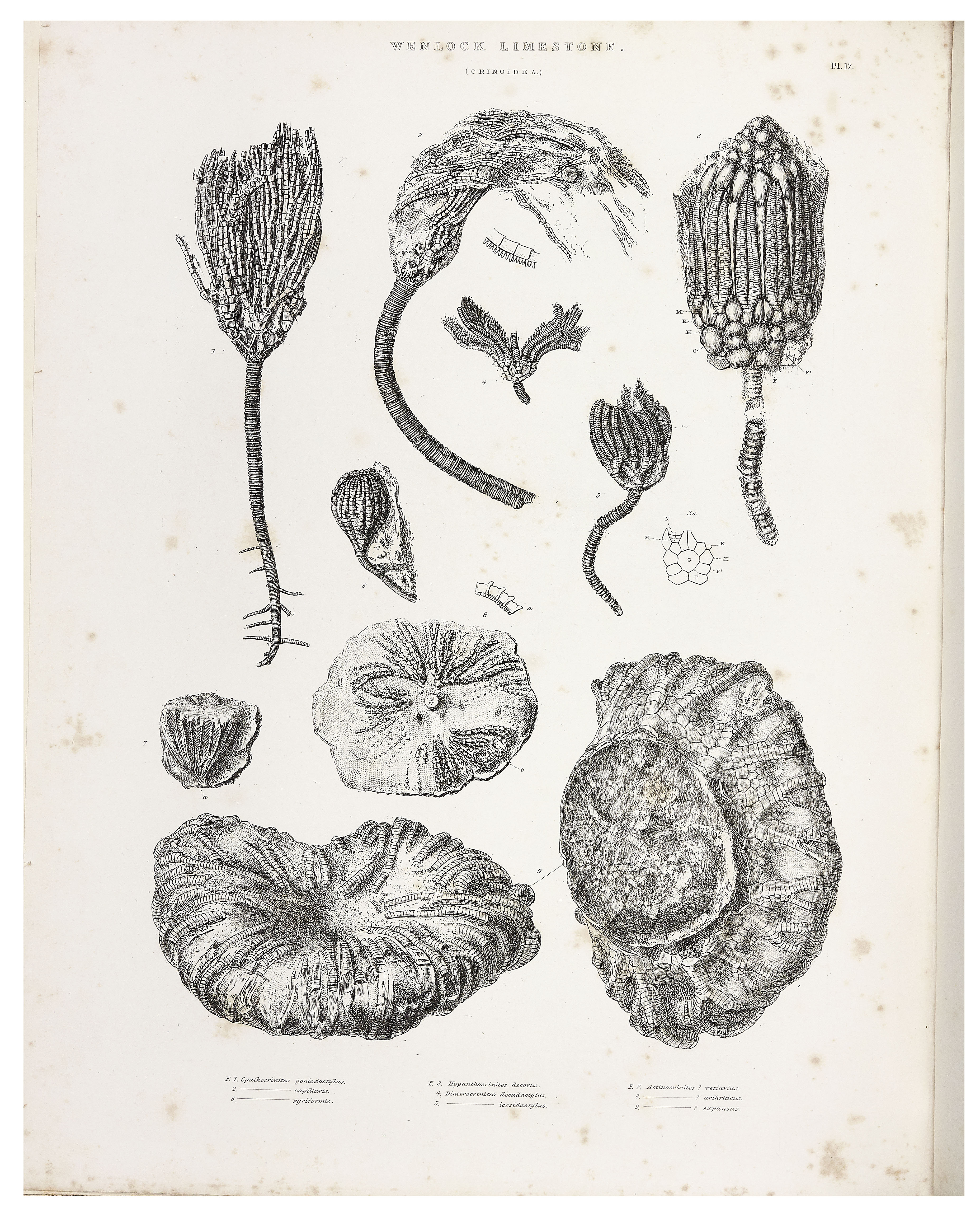 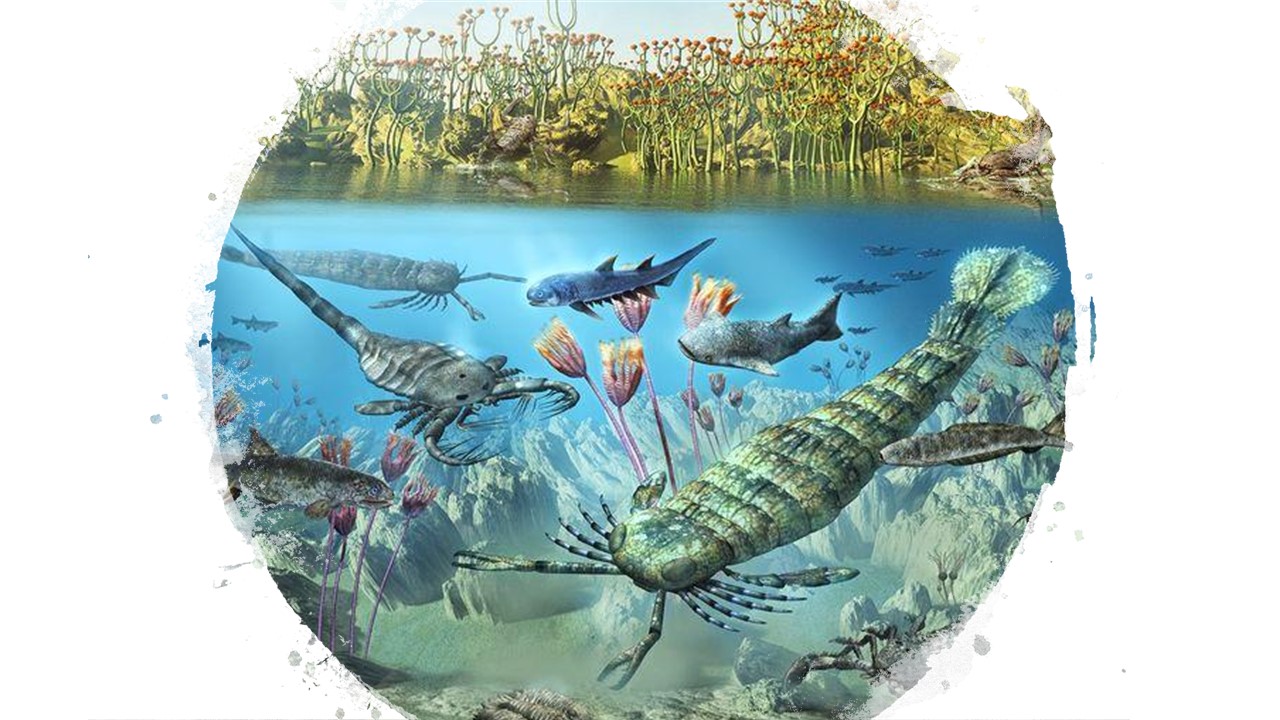 A reconstruction of the Silurian period – taken from https://www.sutori.com/story/silurian-period