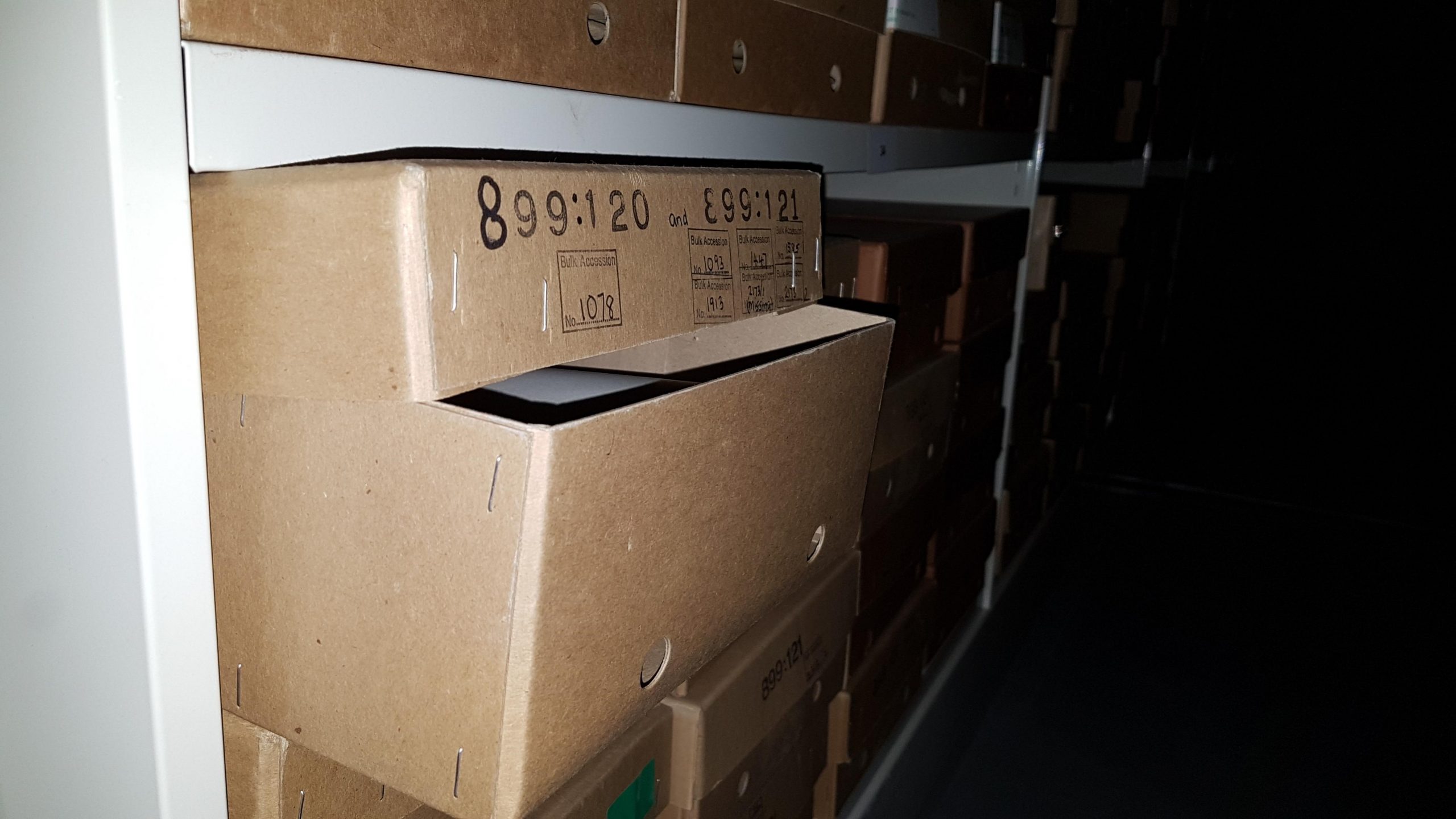 Happy Halloween from Explore the Past. We thought we would share with you a spooky document found in the archives. It is intriguingly described in the index as copies of statements of ‘supernatural’ happenings at Prior’s Court, Powick. So we took a closer look to learn more.

Back in 1956, a local newspaper article featured the haunted Prior’s Court near Powick. The occupier of the property was trying to get their rates reduced because the ‘spooky manifestations’, resulted in difficulty getting staff to stay. It was said there had been two ghosts in the house, one of which ‘was laid’ in 1906, while the other still roams the hallways. The notes held here in the archives are all about that exorcism in 1906. 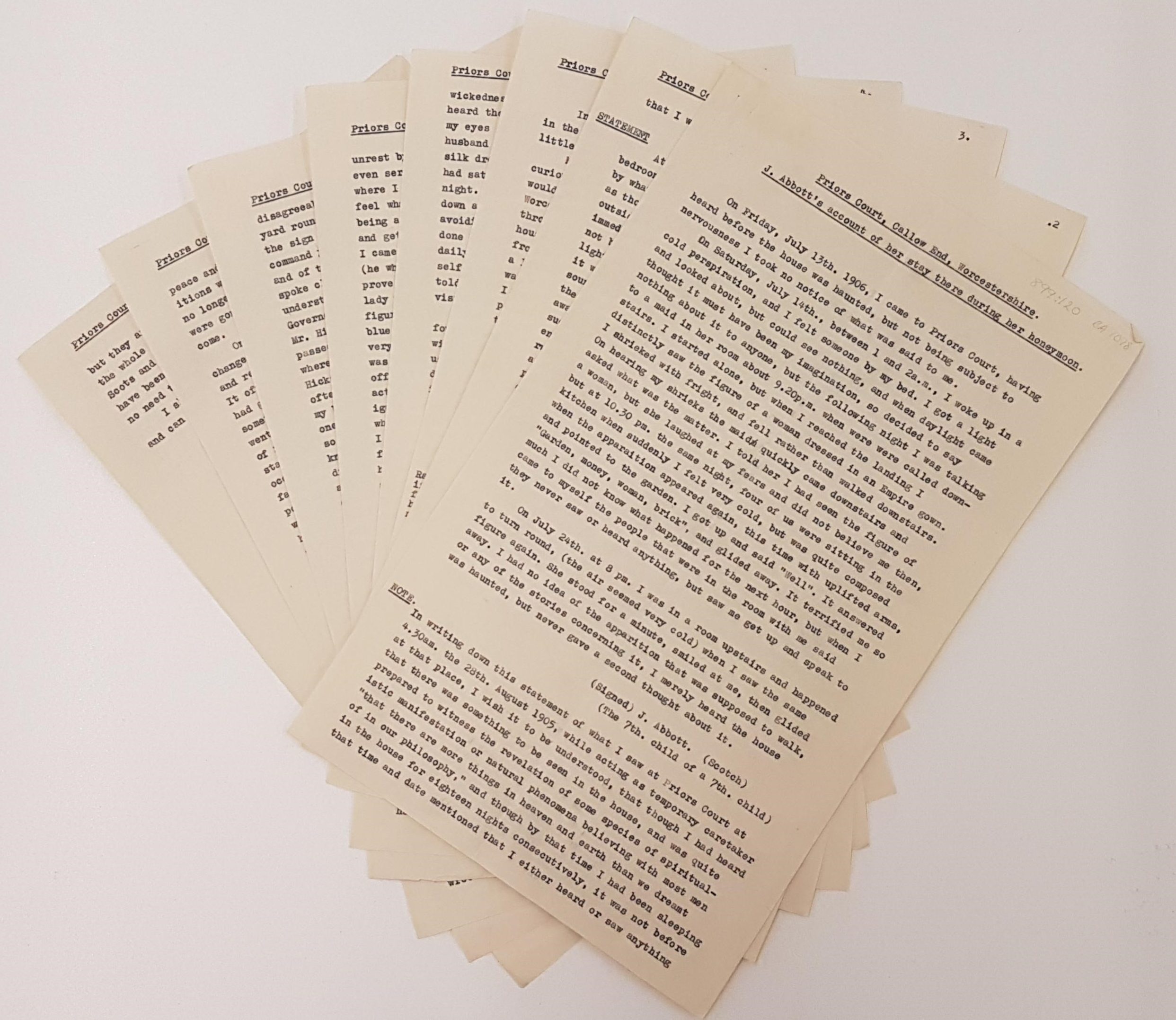 Typewritten statements from several witnesses describe supernatural events within the house between 1905 and 1907. The notes reveal a number of sightings by visitors and residents of the house: J Abbott stayed there on her honeymoon in July 1906, B E Huckfield was a temporary caretaker in the summer of 1905, and Mrs Archdale moved in with her husband, son, and French governess in the summer of 1906. Each tells a slightly different tale of what they saw or felt, but many sightings claim to be a grey lady who walks the hallways, or an angry spirit, possibly of a monk.

The house itself, owned by the Beauchamp family of Madresfield, sits at Callow End, near the Pixham Ferry. It is described by the Victoria County History as beautiful and interesting, and by the Kelly’s Directory as ‘one of the quaintest and most interesting old timbered houses in the county’. Parts of the building date from 1500 although a Victorian restoration apparently removed a lot of evidence of this date. The Grade II listed house, though very small, retains many interesting features, including gabled bays and iron casement windows, a court yard, wide fireplaces including one with a carved surround and chamfered ceiling beams. Apparently Lady Beauchamp called by soon after the Archdale family moved in, to mention the ghost of a ‘gentle looking lady in grey’ believed in local legend to be one of two sisters who had quarrelled over a treasure.

In 1906 J Abbott sensed a presence in the house when she honeymooned there. She states she ‘felt someone by [her] bed’ and on the landing saw a ‘figure of a woman dressed in an empire gown’. Later she was with other people but was the only one to see an apparition with arms outstretched which spoke to her about something in the garden. In 1905 B E Huckfield had stayed at the house for 18 nights and heard strange noises early in the morning. He rose and followed a ‘human body’ passing through several doors, which ‘cast a faint luminous shadow’. These witnesses saw something spooky, but by far the best descriptions are from Mrs Archdale from the summer of 1906 when she and her family moved in.

Mrs Archdale felt an oppression even when she first viewed the house, yet the family still moved in to the beautiful house. Soon after moving, Mr and Mrs Archdale both heard the rustling of a silk dress outside their bedroom doors. Mrs Archdale later saw a man in a monk’s habit who affected her own behaviour with his strong anger, and also describes seeing the ghost of a woman.

When Mrs Archdale appealed for help to rid the house of the wickedness she felt, a few people came forward including Mr Hickson. Although not claiming to be clairvoyant nor a minister of the church, Mr Hickson stated he had ‘never been in a worse atmosphere’. He too sensed a monk with an evil power, and a particular feeling of ‘wickedness’ in the bedroom which made Mr Hickson feel angry. After the exorcism, though he felt the ‘bad influences were gone’ and that only a ‘little restless presence’ remained.

The copy of a subsequent letter from Mr Hickson, also in this collection, passes extra information to the family from his research. He believed two women, a mother and daughter, took refuge at the house many years before when it was a monastery. However, one of the men there at the time was not really a monk and he murdered the mother. Mr Hickson believed the spirit was the murdered mother looking for her daughter.

The beautiful Prior’s Court was apparently exorcised in 1906/7. But perhaps only one ghost was laid. Whether the The Grey Lady or the Angry Monk still remain in the house is hard to know, but hopefully neither followed the document to our strong rooms. The spooky archive can be viewed by any brave souls visiting the archives under the reference 899:120 BA1078.