George was born in 1891, according to the Census, in Redditch to Joseph and Elizabeth Irish, he had an older brother John, and a sister Alice. Joseph Irish was a labourer; his father, Joseph Irish, had been a Blacksmith on Church Green in 1875. George’s mother was originally from Gloucestershire and had married Joseph in the Winchcombe Wesleyan Chapel in 1882; Joseph died in 1905, leaving Elizabeth a widow. The 1911 census shows the family were living in a back-to-back in Britton Street. Elizabeth was a laundress while Alice was a fishhook bender. The two boys and their lodger, Victor Cull, where carters; they may have all worked for Fredrick Irish who lived in Edward Street, the next street along, and who had a shop. In the 1911 Census he is described as a shop keeper and huckster; the later probably meant he bought to resale. 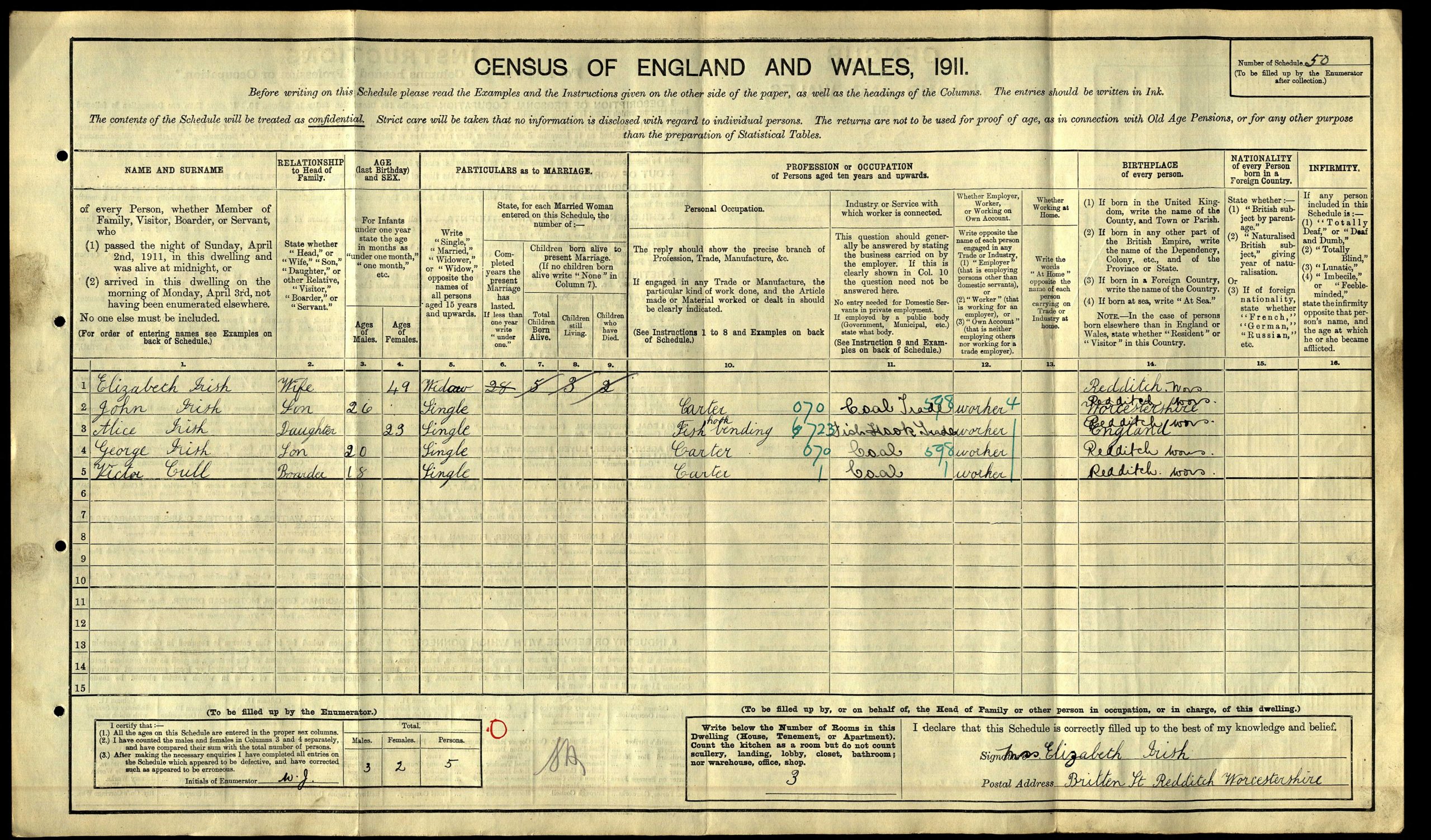 On 27th of April 1913, George was working near where the new school was being built in Bridge Street when some young boys ran up saying that they were playing and a boy who had been with them had fallen into a deep ditch. George ran to the spot and jumped into the 14-foot deep and 2-foot-wide water filled excavation, he found the boy and managed to hold him above the water until help arrived. The boy was given artificial respiration and survived.

George was awarded the Albert medal for life saving on land, this was a forerunner of the George medal. He travelled down to London where he was presented with the medal by King George V himself at Buckingham Palace. The Carnegie Trust also presented him with a watch for saving the life of the boy, both medal and watch are still the family they are now in the care of Alice’s grandson.

In 1914 when the war broke out George and his brother were working as carters. In 1916 conscription was brought in to supply more men for the war effort. Military tribunals were set up to hear appeals against conscription into the armed forces. The man or employer could appeal either that they were doing work of national importance or for domestic reasons to be exempt from military service.

George Irish was called up, his case was presented at the Redditch Military Tribunal on March 13th 1916; his employer Fredrick Irish appealed for an absolute exemption but this was ‘not allowed’ by the tribunal, and George was given to the 30th March to join up.

“an appeal came up for a hearing in respect of a carter employed by Mr Irish, Redditch. It transpired however that the man had already enlisted”.

The Redditch Indicator March 25, 1916. George Irish’s appeal at the Tribunal. He had already enlisted so the appeal was dismissed.

George had joined the 14th (Service) Battalion of Gloucestershire Regiment, who recruited in both Bristol and Birmingham. This was a Bantam Battalion, recruiting men who would have been rejected for being too short earlier in the war. Few of George’s military records survive so we can only piece together his short service record from the fragments. After he did his basic training he was sent to France. George arrived during the Battle of the Somme which had three phases, the last phase was the Battle for the woods. The Battalion was part of the 35th Division, which took part in an unsuccessful attack on a German post near Arrow Head Copes on the 22nd August 1916.  This is the date that George was killed in action; it may have been here that he died but without records we can’t be certain.

Like so many others his body was never identified or found to be given a named grave in one of the many Commonwealth Cemetery’s that are in the region. However, his name is on the Thiepval Memorial pier 5A and 5B, and on the memorial cross outside St Stephen’s Church in the centre of Redditch. He is remembered in the family as Alice’s much-loved little brother. Before George went to France, he visited his sister and held his new baby niece in his arms.  The family story has always been that as George was in a reserved occupation, he should never have been called up and that his employer had made an error when filling in the form. George’s medals have been passed on to Alice’s great grandson and he will continue to tell George’s story.