Second class passengers Mr. Leopold Weisz and his wife Mrs. Mathilde Françoise Weisz travelled together on the Titanic, not as tourists, but to emigrate to Canada where Leopold had already been working and intended to continue.

The 1911 census showed the couple lived in Albert Terrace, Victoria Road, Bromsgrove, having married only the year before, probably in a civil service given their different religions. 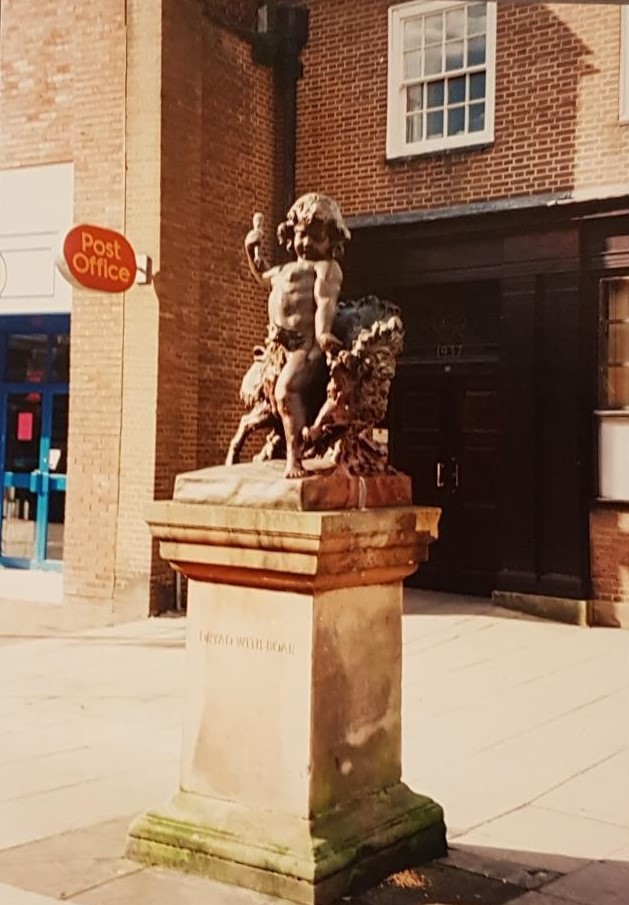 The Bromsgrove Guild had been set up in 1898, growing out of the Bromsgrove School of Art, and continued until 1966 for local designers and manufacturers. It had a woodshop that produced furniture and later became the woodcarving shop jewellery making and enamelling workshop, a plaster workshop, and lead workshop all in different parts of the town. By 1902 representatives of the Guild were based in London, Glasgow, Edinburgh, Liverpool, Newcastle and the West Country. They also exhibited their members’ works in Liverpool, Leeds, Bolton, Bristol and London at the 1903 Arts and Craft Exhibition Society exhibition in London. ‘The Craftsman’ magazine (1903) described the “men and women” of the guild, “pledged to co-operation and mutual support”, who “train their apprentices: choosing and employing only those who are capable of developing the main idea of the master craftsman.” This was the heyday for the Guild. In 1905 the Guild was commissioned to work on railings and gates for Buckingham Palace, for which Worcestershire Archives hold some lovely photographs. Nearly 150 employees worked for the guild then, on many different projects, with offices throughout the UK and even branches in Canada and the USA.

Leopold Weisz was described as one of the Guild’s finest craftsmen. He started with the guild in about 1905. He had worked in Birmingham as a jeweller before moving to Bromsgrove to work for the Guild, where he trained as a stonemason. According to Pevsner he helped Charles Bonnet with the plaster panels of birds and fruit for Holy Trinity and St Mary Church in Dodford.  Leopold had previously travelled to Canada on the Lusitania, parts of which had been designed by fellows at the Guild. He had worked in Montreal on commissions for the Bromsgrove Guild, with local Edward Lancelot Wren a British architect who managed the Montreal workshop for the Bromsgrove Guild which opened in 1911. He carved a frieze for the Montreal Museum of Fine Arts (now the Montreal Musee Des Beaux Arts) and stone shields at the Dominion Express Building built in 1901. He had either returned to England to collect his wife to return to Canada. According to different sources he either intended to set up business with Mr Wren who had contracted his work on the stone shields or would work in Canada then return to Bromsgrove. The couple appeared to be travelling with the their life savings so probably didn’t intend to return to the UK. They bought their ticket on the Titanic from Messrs Houlder Bros and Co, Ltd in Birmingham. Mathilde was a dressmaker, and sold a prosperous establishment for several thousand pounds to travel with her husband when he returned to Canada. He (or perhaps more accurately she) sewed their life savings of $15, 000 of gold into the lining of his black coat with a fur lined astrakhan collar.

Second-class Passengers were often tourists, academics, members of the clergy, and middle-class families. The ship’s musicians also travelled in second-class as they were employed by an agency. The average ticket price for an adult second-class passenger was £13, (£1,123 today). Their experience on the Titanic was similar to travelling first class on smaller liners. They had their own library and a private smoking room for men, while their children could play deck quoits and shuffleboard on the promenade. Two Roman Catholic priests on board celebrated mass every day for second- and third-class passengers

On the evening of the disaster, Leopold wore his coat full of gold over his grey suit, and was walking on the deck of the Titanic, while his wife joined in with impromptu hymn singing in the dining room. Other passengers described her singing The Last Rose of Summer.

Another Second-class Passenger, Bertha Watt, remembered the Weisz’s as a “very fine couple” at the same table for dinner, saying, Leopold “had done a beautiful drawing in my autograph album”. Mathilde later remembered it had turned very cold on deck on the Titanic the night of the incident. Soon after she and Leopold went to bed she said, “there was a tremor as if someone shook me roughly.” She got out of the bunk and spoke to the steward who assured them nothing had happened. But soon after, an officer came in and said, “all women and children on deck”.

The pair were split up in the ensuing chaos. Leopold may have struggled to swim in the water with all the gold sown into the seams of his coat. Meanwhile, Mathilda, wearing just a nightdress and coat but no stockings, was lowered into a lifeboat. She was later picked by the Carpathia which arrived at 4:10 am. In total this ship rescued 711 passengers and crew and took them back to New York City. 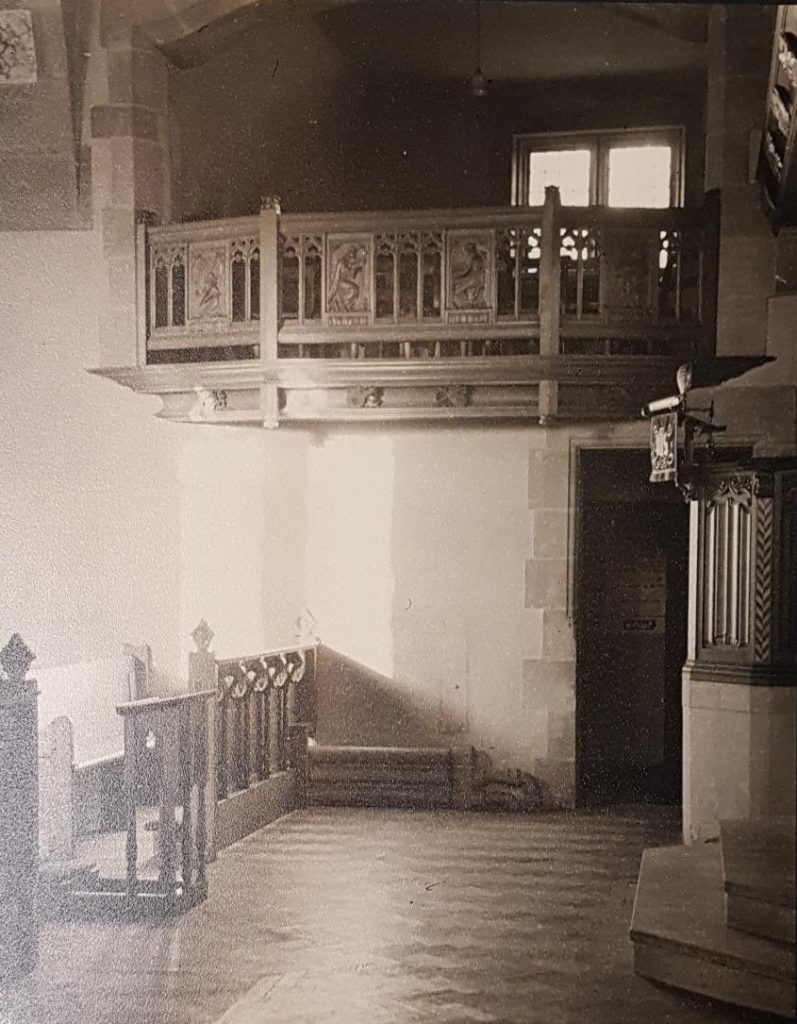 French survivor Juliette Laroche and her daughter Louise remembered Mathilde on the Carpathia as a strong character who cried for her husband but helped other passengers. Bertha Watt said “she was in a bad way and [her] Mother must have walked miles with her up and down the decks…Madame Weisz could speak seven languages so sat at this table every meal and ordered for these folk. A great tribute should be paid her for her patience and help when her own heart was breaking”. Juliette Laroche shared that Mathilde showed several ladies how to steal napkins to use as nappies for their babies, then sitting on them to hide them, claiming to the crew they only spoke French and didn’t understand.

Leopold sadly drowned when the ship went down. His body was recovered by the cable steamer the Mackay Bennett three weeks after the incident. According to an article reprinted in the Berrow’s Worcester News on 4th May, the steamer recovered 306 bodies, many in very little clothing, but some still in full evening attire. Some bodies were picked up as far away as 170 miles from the wreck.

Leopold’s body was carried on the maritime express train from Halifax and he was buried in a Jewish cemetery in Montreal, Canada. The gold from Leopold’s coat was returned to Mathilde when his body was recovered. From the list of valuables on his body, it looked like he had carried all of the couple’s valuables on his person. His key chain and keys, cigarette case, two pocket books, a bank book, gold ring, pin, gold chain and about £30 and $26 in notes were returned to Mathilde. He was also found with three watches, which, like all the watches found on the bodies were found to have stopped at precisely 10 minutes past 2. 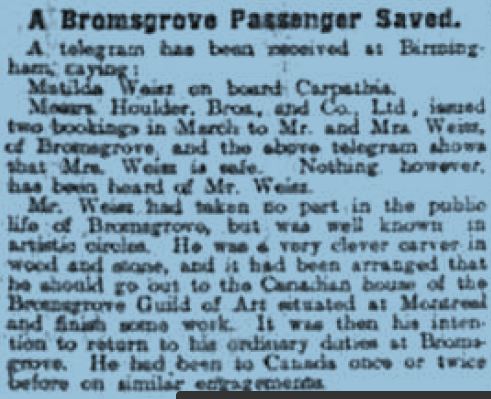 Worcester News 26 April 1912 thanks to Newsquest

Mathilde later married Leopold’s business partner in Canada, Edward Lancelot Wren. She was decorated by King Albert (of Belgium) with the Medaille de la Reine Elisabeth, for raising $57000 singing for Belgian charities. Mrs Wren continued to take part in Montreal musical theatricals and operettas until the end of World War II. She was an active member of the Westmount Women’s club and founder of the Belgian Musical Club appearing in musical theatre and operettas.

Mathilda Wren died in Montreal in 1953 at 79 where she was buried. More recently, a street in her native town of Ghent was named Mathilde Pede after her.