On 1st September (and also now 1st March) we get a new registration number for vehicles. Here at the Worcestershire Archives we hold a collection on microfilm of historic vehicle licences from before the system was nationalised. These can be viewed in our self-service area which is open now after closure due to Covid-19. Staff can also make digital copies for customers using our enquiry service.  One such enquiry inspired one of our archive assistants to take a closer look at registrations and specifically a vehicle registered to a garage in Evesham called Coulter’s. 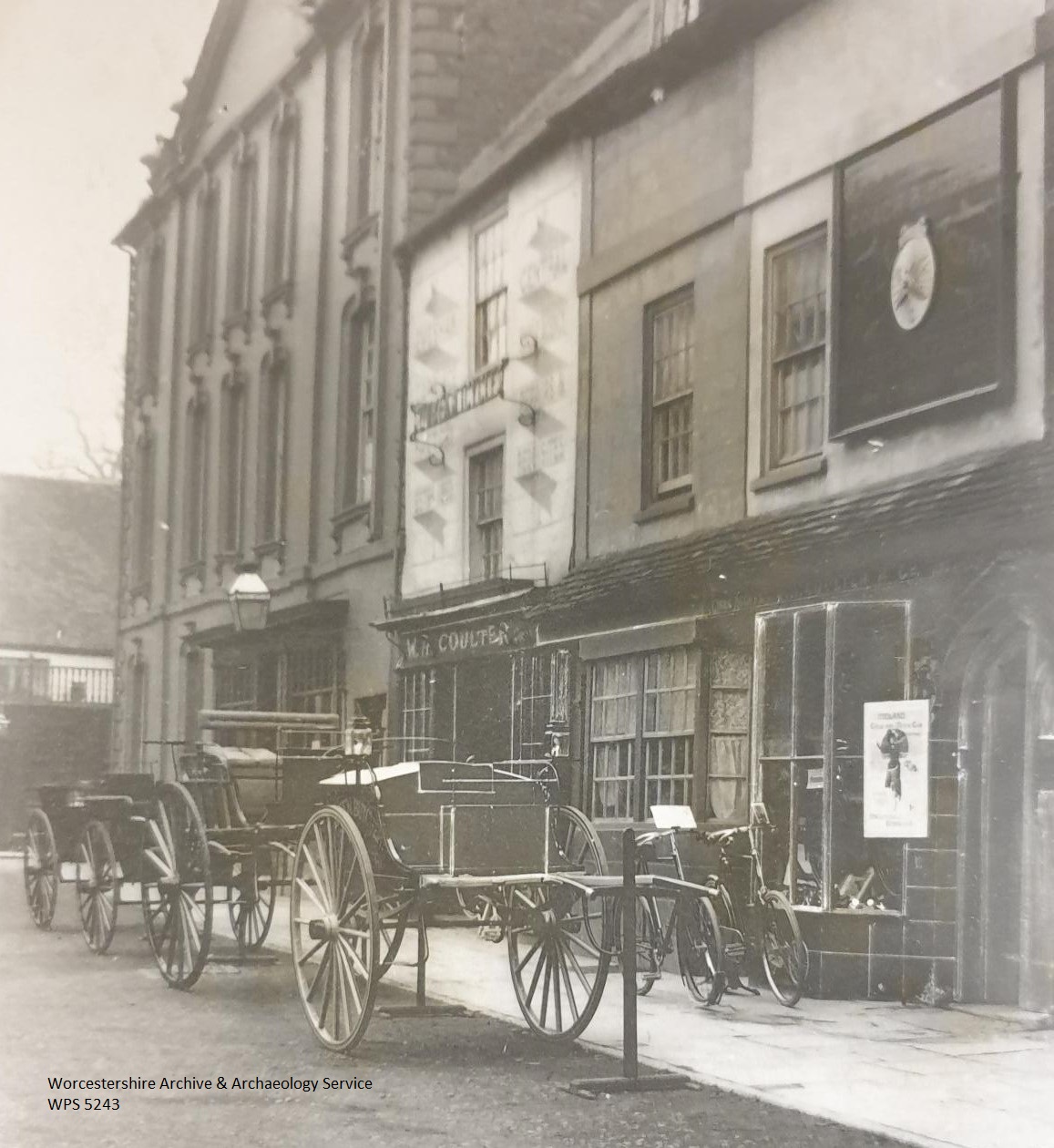 Coulters of Evesham. Photograph from the Worcs Photographic Survey by B.G. Cox, of Evesham used with permission from David Cox

Vehicle Registration was made compulsory in the United Kingdom in 1903. Both Worcestershire County and Worcester Borough administered licences. Each registration authority used one or two letters to designate their local registrations along with a number from 1–9999. In 1932, Local Authorities began to use three-letter and three-figure marks (ABC 123). When these registration numbers ran out, the letters and numbers were reversed (123 ABC). Between 1963 and 1983 the Suffix system introduced a letter indicating the year of registration at the end of the plate (AAA 111A) which were switched to the prefix system from 1983 to 2001 (A111 AAA). And in 1974 modern computers created a centralised system when the DVLC took over from local councils.

For this particular enquiry we were looking for the registration of a tractor registered in Worcestershire to Coulter’s Garage, in Evesham’s Market Place in 1953. Like many of the vehicles sold by Coulters at that time, it was a Fordson tractor, produced in a partnership between Ferguson and Ford. This particular year is a good example of the items sold by Coulters, when they registered two new vehicles, the Fordson Tractor and a ford Saloon car.  They also repaired and sold second-hand vehicles. 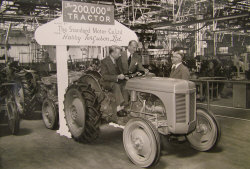 We didn’t have any archives for Coulter’s so we searched for information and documents online and appealed on facebook to a group called ‘Photos and Memories of Evesham’ for additional information on the company, discovering that Coulter’s is fondly remembered by staff and customers alike.

Coulter’s began in the 1850s as a Carriage Building company. The business was set up in Evesham’s Market Place by John Coulter originally from Claines, who, in the electoral register for Worcester, appeared at Spring Gardens off the Tything in Worcester.

By 1860 the Post Office directory shows John was a Coach Builder in Evesham and by the 1871 census John was a Coach Builder employing 5 men and 2 boys, including his son William Ralph Coulter.  William Ralph, born in 1849, is memorialised in a window at St Lawrence’s church in Evesham donated by his sister. He was a chorister there for 50 years. William took over the business from his father who passed away in 1885, and as the company developed amid technological advances, the 1911 census shows William as a Carriage Builder and Cycle and Motor Agent.  William ran Coulter’s until his death in 1927.

In the 1930s this garage advertised new and repaired Fordson tractors for sale as far afield as the Gloucestshire Echo. The company became incorporated at this time, to deal in Ford cars and commercial vehicles, no longer building carriages. The company continued to sell Ford vehicles, both for private and commercial customers.

The 1960s are a period well remembered by locals. In the 1960s there were 3 Coulter’s sites in Evesham as well as one in Alcester and a Stroud dealership. the company built a new purpose depot at Elm Road for Heavy Goods Vehicles, vans and Agricultural vehicles (where Elmside is now, the site of the old Box Factory). They continued to sell cars from the original Market Place site in the centre of Evesham and site at Cowl Street where bodywork and spraying were carried out (Originally the tractor division), where Glyn Jones the stores manager at Cowl Street and later Elm Road, could remember everything “all in his head” with no need for computers and tractor mechanic ‘Bob’ Evans in 1979 ‘could repair just about anything’.

Mr Litterick in his 80s had become the chairman of the company at this time and Mr Wilf Spiers the managing director, with Mal Spiers their secretary. Mr Litterick had worked his way up in Coulters from a young man. 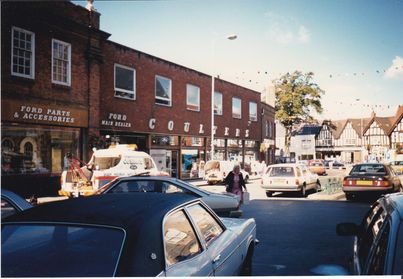 Photograph of Coulter’s in 1989 thanks to Adam Mould

Adam Mould’s photograph from 1989 shows Philip Lionel Cooper’ s white Mk3 Cortina in the foreground, a car he bought from Mrs Whitehouse an old shareholder of the firm. Andrew Watton remembers this showroom in the Market Square with a tannoy system you could hear when walking past. The tannoy was operated by Maureen the receptionist who had a “specially adapted switchboard” because she was blind and Sue Thould’s mother Sheilah Wright covered her for holidays. On Saturdays Chrissi Rock, whose father John Lake was the Parts Manager, remembers “playing pretend in the office, playing with the old computers… and exploring… down in the cellar which was spooky as it overlooked the cemetery.” Nowadays this back wall onto the cemetery is all that still stands of the original building.

In 1989 the Berrow’s Worcester Journal reported on a new £1.2 million building project on The Link in Evesham, near the new bypass, to which Coulters was moving, and in the 2000s the company was taken over by Brooklyn Ford but sadly no longer exists in Evesham.

A special thank you to all those in Evesham who shared their memories and photographs of Coulter’s.

In completing this short blog we realised we do not have many images of agricultural machinery such as the Fordson Tractors sold by Coulters. We would like to appeal for more of these please. Please contact our collections team if you would like to bring us anything you think will add to our collections: Collections Team

One response to “Vehicle Licences at Coulter’s of Evesham”

1000 intricately painted bees are being displayed outside The Hive until 2nd September 2021 to raise funds for St Richard’s Hospice. Humans have long history with honey bees and we thought we’d take the opportunity to explore the archaeological and historical evidence of that relationship.