Discovery of 5,000 year old skull on the banks of the Avon

Worcestershire Archaeology have featured in the news recently following the discovery of a human skull. Here Nick Daffern, Senior Environmental Archaeologist, tells us more about the processes taken to identify the find:

“On 20th March 2013 West Mercia Police were contacted by a member of the public. They had discovered what appeared to be a human skull to the west of Eckington Bridge on the northern bank of the River Avon (SO 92895 42236) whilst walking their dog. The skull was not complete with only the upper cranium represented. West Mercia Police believed the skull to be potentially archaeological in origin and contacted Worcestershire Archaeology. It is suggested that the skull is that of a female due to the absence of prominent brow ridges and the overall slightness of the skull. 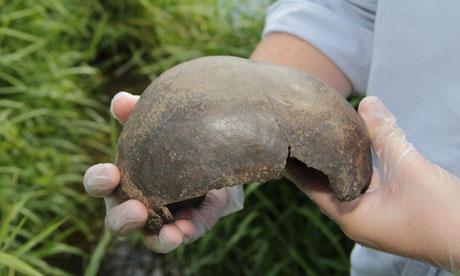 The 5,000 year old skull discovered on the banks of the river Avon

The skull was submitted for radiocarbon dating to the Scottish Universities Environmental Research Centre (SUERC) radiocarbon dating laboratory by Detective James Bayliss of West Mercia Police. A single bone sample was extracted from for AMS (accelerator mass spectrometry) radiocarbon dating. The date 3338 – 3025 cal BC (SUERC–46228 (GU30346)) obtained from the radiocarbon dating proves that the remains are archaeological in nature and are Middle Neolithic in date. 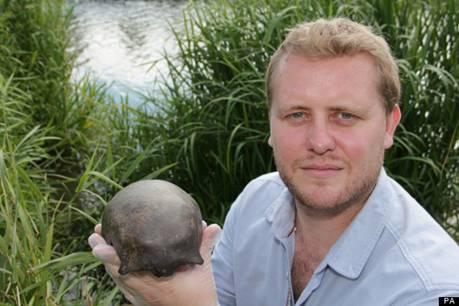 Nick Daffern, Senior Environmental Archaeologist, with the discovery he has been working hard to help identify

The only previously identified human remains from Worcestershire, which are definitely Neolithic in date, were from a crouched inhumation encountered during excavations at Wormington Farm (SP039372) near Aston Somerville (Coleman et al 2006, 63). 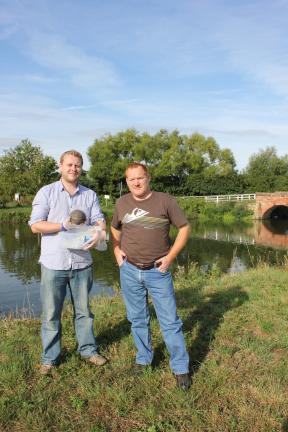 Nick Daffern from Worcestershire Archaeology with Martin Evans, who discovered the skull

Interestingly, this is not the first skull to have been recovered from the banks of River Avon in similar circumstances. Another was recovered from the vicinity of Nafford Weir after the river had been in flood. Despite this, it is tempting to suggest that a Neolithic monument, possibly a cemetery, upstream of Eckington and Nafford is being eroded during high energy flood events of the River Avon and is introducing these buoyant, easily transportable and easily identifiable human remains into the water course.”

Once the Archaeology Service have completed investigations on the skull it will be handed over to Worcestershire Museums Service for display at either Hartlebury Museum or the Almonry Museum in Evesham.

More features on this story can be found on the Guardian website, the Daily Mail and on YouTube.