Treasures of Worcestershire’s Past: ~33~ Letter revealing details of a Prison Hulk shipwreck

This week’s Treasure is a letter which forms part of the archives of the Bomford family of Atch Lench [Church Lench]. The Bomfords are a well-established land-owning family in Worcestershire. They are perhaps most well known for their part in the development of farming technology through Bomford & Evershed ltd. 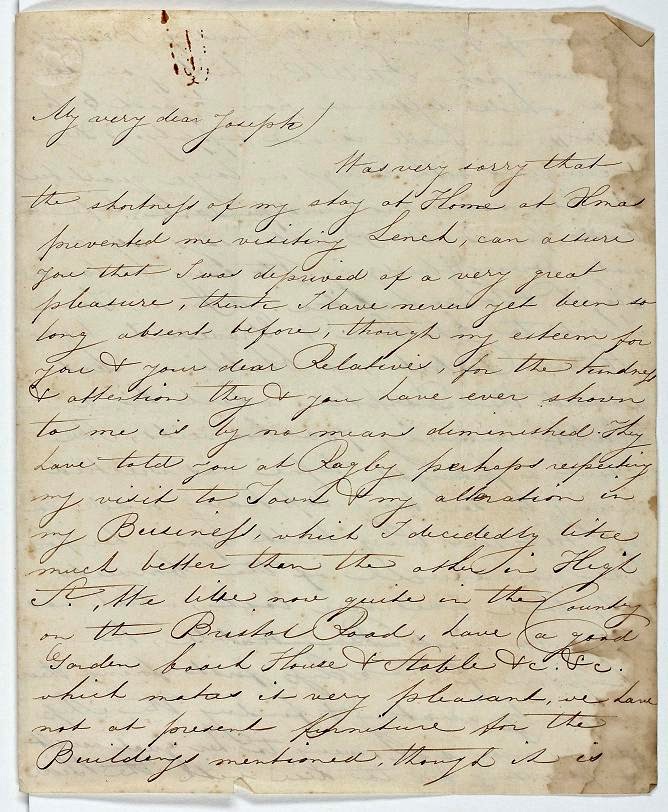 This letter illustrates another side to the family’s business and personal interests. It was written by a Mr Hopkins on the 19th of January, 1830, and addressed to Joseph Bomford. After exchanging pleasantries, Mr Hopkins reveals that several months earlier he had visited the Chatham Docks in Kent and boarded the prison hulk, the Dolphin, ‘containing 700 convicts’ awaiting transportation to Australia. Hopkins provides a fascinating account of his observations the prisoners

‘…truly it was a…pleasing sight to see what great attention was paid to Devine [sic] Service throughout the Ship the Convicts were standing in rows of about twenty each, a prayer Book seemed to be allowed between two of them, it is a great pity that such well informed men as many of them are should be so shut out from the world as many of them are well versed in the Languages, whilst others are very clever artists…’

Perhaps even more interesting is the fact that Hopkins’ visit took place a mere fortnight before the hulk was ‘wrecked’ in an incident causing the loss of three lives. Hopkins describes the captain’s futile attempts to save the ship by ordering ‘500 of the Men to be unlocked from their Hammocks + come on Deck to…balance her…’.

Hopkins attributes the wreck to the ship being ‘top heavy’ owing to ‘kitchens…built…for the convenience of the convicts…’ The incident was widely reported in newspapers all over Britain, with most of the articles (e.g. one found in the Caledonian Mercury, 22 October, 1829) corresponding with and expanding upon Hopkins’ account. Newspaper reports on the results of the inquests into the three deaths mentioned above may also be found.

The letter is a good example of the gems that can turn up in boxes of seemingly dry farm accounts, tradesmen’s bills, and rent books. It also demonstrates how valuable family correspondence can be for researching not only local and family history, but events of wider national (and even international) significance.

This document can be viewed in the Original Archive Area at The Hive by using reference 705:47 BA 2592/2.

Further research There is a book about the Bomford partnership with the Evershed family available at the County Hall branch. This is The Bomford Story: A Century of Service to Agriculture, by Theo Sherwen (Evesham: Bomford & Evershed, 1979; Shelfmark .Local Ref 629.225).

If you are interested in finding out more about the convicts in the prison hulks, including the Dolphin, see http://www.nationalarchives.gov.uk/documents/adm6.pdf and The National Archives website.