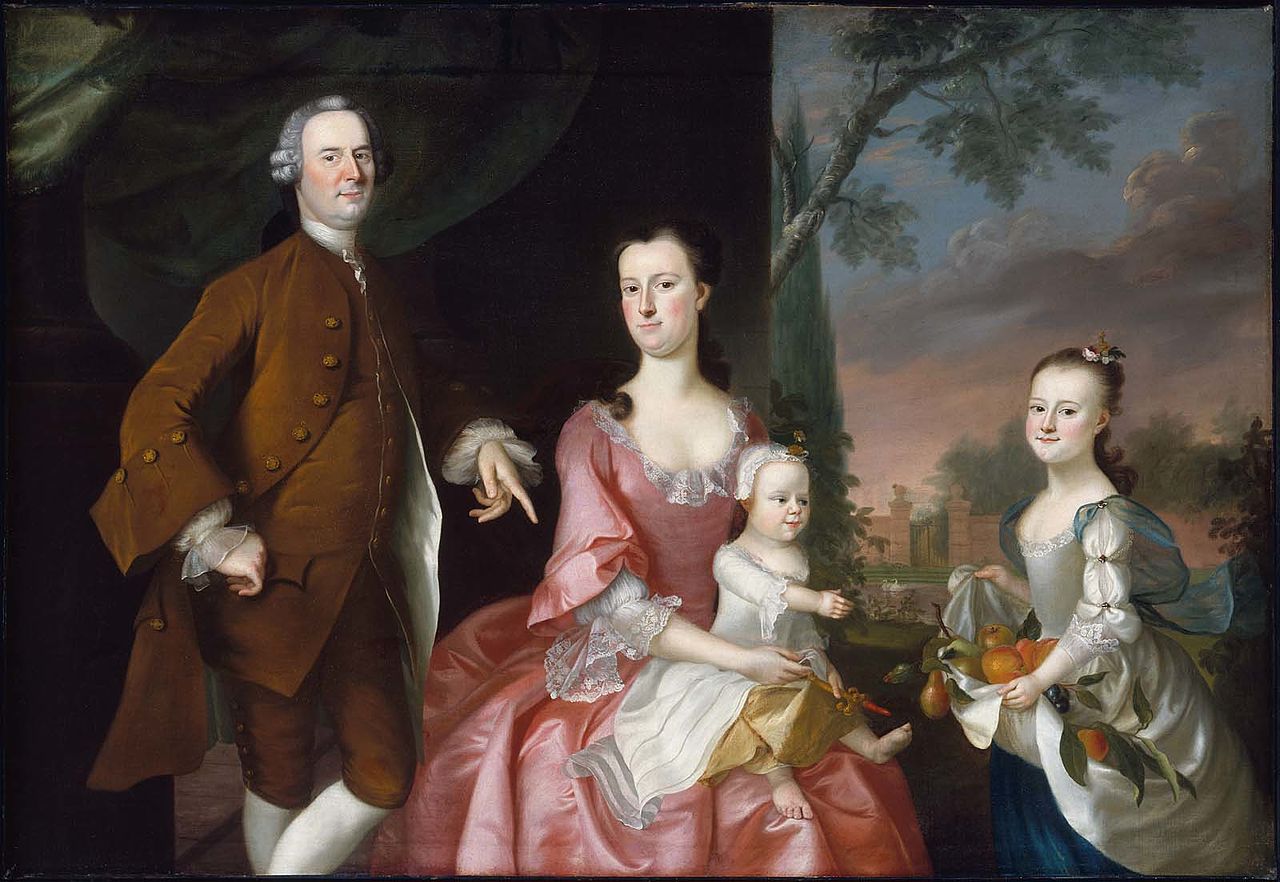 This painting of Isaac Winslow and family, by Joseph Blackburn, is one of the first group portraits in America. The painting is in the Museum of Fine Arts, Boston. Image taken from Wikipedia and used under Creative Commons

For the final instalment of our Explore Your Archive feature we are looking at a very well known painter, Joseph Blackburn. Whilst Blackburn’s artistic works are famous across the world, details of his personal life are less clear; to date there appears to have been no confirmation of the details of his later life and death, and he is often even mistakenly noted as being American. Now, thanks to research undertaken by staff in Worcestershire Archive Service, we are able to reveal new details of his life for the first time.

Joseph Blackburn was one of the most important painters working in colonial America during the 1750s and 1760s. Portraits by him hang in many American galleries as well as a number in Britain. The National Gallery of Art in Washington describes him as, ‘…particularly important in the history of American art…’. However, as The Oxford Dictionary of National Biography states,

Joseph Blackburn described himself as a ‘limner’: a term used for a painter, particularly a portrait painter and commonly used as such in colonial America. He first appears in Bermuda working as a limner in 1752 before moving on to Massachusetts, New England and New Hampshire. He is believed to have moved back to England in 1764 where he went on to produce portraits in the south-west of England and Ireland. The last known portrait by him was painted in 1777 in Newport, Monmouthshire. Around one hundred and fifty paintings have been attributed to him.

Now, thanks to evidence found within records held in our collections, we are able to confirm that Joseph Blackburn lived and died in the city of Worcester. He and his family lived in Broad Street in the parish of St. Nicholas. The exact date they moved there is unclear, but he is certainly a resident in 1768.  They also leased properties around St. Martins Gate in the city, including The White Horse pub. Joseph inherited the lease for the properties after his father, John Blackburn, gentleman, of Kinfare, (now Kinver), Staffordshire, and possibly his aunt, Henrietta Blackburn of Worcester died in 1759.

The 1759 will of Henrietta mentions Joseph’s wife Mary and their two daughters, Henrietta and Elizabeth. His daughters both married local men:  Henrietta to William Hill and Elizabeth to George Squire, but both women appear to have died without children.

A possible reason for Blackburn’s subsequent loss from the city’s history could be that there were no direct descendants to promote his artistic legacy.  He is remembered in ‘Biographical Illustrations of Worcestershire’ (1820) by John Chambers:

‘An historical painter, resided in this city, where he practised his art, first as an amateur, and afterwards as professor: he died in the year 1787, after accumulating a fortune abroad. There was a painting by him of Caractacus before Claudius, in the possession of Mrs. Hill of the Tything* and also a landscape, and some portraits, by the same artist:…   *deceased’

Mrs. Hill was Ann Hill, who died in 1819. We have as yet been unable to establish her exact relationship to Joseph Blackburn, but it is likely that she was related via his daughter Henrietta’s marriage to William Hill.

Joseph Blackburn was an active member of the parish of St. Nicholas, as an Overseer of the Poor and also a fundraiser for the restoration of the church. He was buried at St Nicholas church, now the Slug and Lettuce, on 11th July 1787.

So how did we find the information? The following entry in Biographical Illustrations of Worcestershire (Chambers.1820) gave us clues as to who he was: 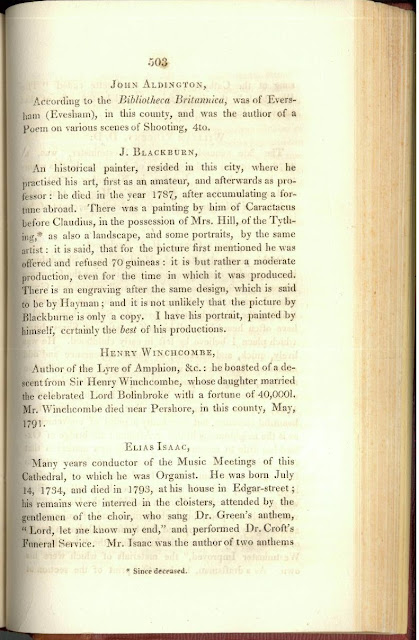 An internet search revealed Joseph Blackburn was indeed a prolific portrait painter, firstly in Bermuda around 1752 and later around Massachusetts, New England and New Hampshire

The signature of John Blackburn

A search in our online catalogue for the surname Blackburn found a copy of a lease dated 1771, containing the names Joseph, Elizabeth and Henrietta Hill (nee Blackburn) within the Worcester City archives. On checking the document we found they had leased property around Silver Street in the parish of St. Martins 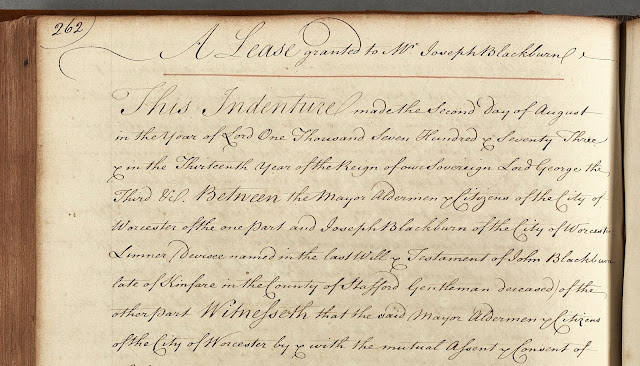 The Lease Book revealed Joseph inherited the lease for the property in Silver Street from his father, named on the document as John Blackburn, gentleman, of Kinfare, (now Kinver), Staffordshire. An earlier Lease Book showed John Blackburn had obtained the lease in 1745 and after his death in 1759, as the executrix of his will Henrietta Blackburn was herself dead, it passed to his son Joseph.

We knew the leased houses were not occupied by the Blackburns, as tenants were named, so we set out to establish where in the city they had lived. As he was buried in St. Nicholas, we searched the Poor Rate Books for that parish and found him as a resident of Broad Street from 1768. 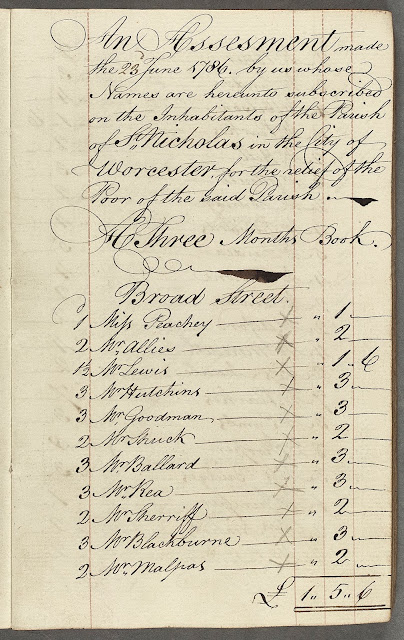 Further searches within the parish records revealed he was an active member of the church; his name appears as an Overseer of the Poor and as a fundraiser for the restoration of the church.

Due to his wealth, his will was not proved locally, but by the Prerogative Court of Canterbury (PCC) and we found a copy of it on the website of The National Archives. His beneficiaries were his daughters Elizabeth Blackburn and Henrietta Hill.

While we were checking the Worcestershire Will Index, held here at the Hive, we found the will of Henrietta Blackburn, dated 10 December 1759,   the possible aunt of Joseph. In it she leaves her personal effects to Elizabeth and Henrietta, the daughters of Joseph and Mary (who she refers to as her niece). In a codicil to the will she leaves to Mary, ‘four large paintings, now in my parlour’. John Blackburn was a witness to the will.

As far as we have been able to establish, both women died without children.

Chambers ‘Biographical Illustrations of Worcestershire’ had said that a Mrs Hill of The Tything (Worcester) had a number of his paintings. We have as yet been unable to establish her exact relationship to Joseph Blackburn, but it is likely that she was related via his daughter Henrietta’s marriage to William Hill. As the book was published in 1820 and it appears from the asterixed ‘deceased’ that the death of Mrs Hill had occurred after the book was written, we checked for a will in the name Hill around that date and found the will of an Ann Hill from the area, who had died in 1819. In Ann Hill’s will, four paintings are described:The Captivity of Caractacus, The View of Bristol Hotwells, The view of Ledbury and The Sleeping Venus

The paintings were left to Ann’s son Thomas William, but what has happened to them since? Much of his surviving work is held by galleries in the United States, although some can be found in Britain.

We feel we have only scratched the surface of all there is to find out about this remarkable man and his life. Can you add to the story? If you can, please get in touch. We would love to know more.

3 responses to “Explore Your Archive: Finding the elusive Joseph Blackburn”