‘Le Roman de la Rose’ was a very popular work of its time and widely read throughout Europe. It is the work of two authors. It was begun by Guillaume de Lorris in the 1230s as an allegory of the art of courtly love. Some time after Lorris’s death it was continued by Jean de Meun. He continued the allegory, but added his own particular spin on the tale. As a whole the poem provides a useful source of information to readers on how to conduct themselves in the matter of love as well as providing an insight into medieval life and thought.

For many the phrase ‘courtly love’ conjures up images of lords and ladies, tournaments, knights setting out on noble adventures and the traditional codes of honour associated with them such as duty, honour, courtesy and bravery. These ideals of the courtly love of medieval times were recorded in ballads and poems like ‘Le Roman de la Rose’.

And the connection to the Hive?

Worcestershire Archive and Archaeology Service staff at the Hive have recently discovered that we hold a few precious pages from a copy ‘Le Roman de la Rose’ amongst our diocesan archives. Our pages are quite faded in places and certainly not as glamorous as some of the copies held elsewhere. They are slightly unusual in that they are written in three columns rather than the more usual two we have observed in other copies online. 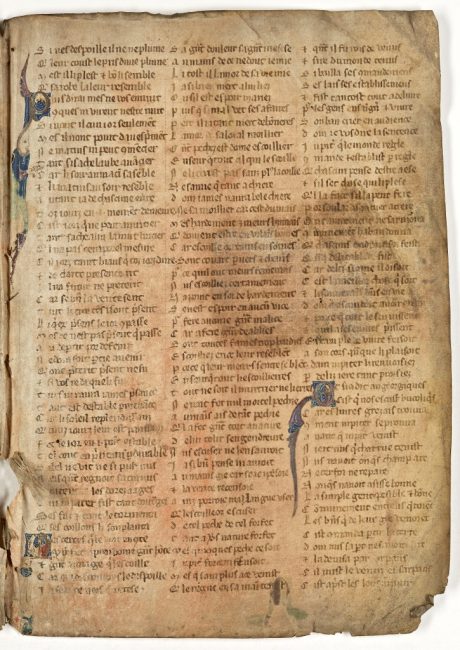 One of the pages held at the Hive

Although our pages do not have any of the fine illustrations associated with many other copies of ‘Le Roman de La Rose’, they do contain some of the ornate capital letters which appear regularly throughout other manuscripts. 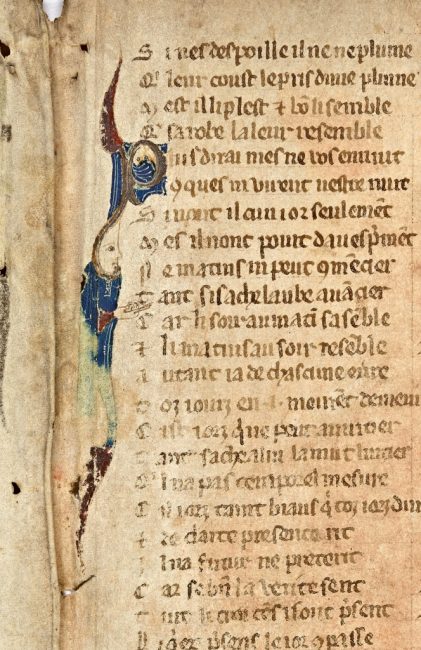 One of the ornate initial letters

We were also intrigued to discover other sketches of faces almost hidden from sight in our manuscript.

Faces, perhaps of characters from the story?

Want to find out more?

There’s been a great detail written about ‘Le Roman de la Rose’ and there are many websites to explore to find out about the poem, its meaning and how it has influenced other works of literature. One place to start is the Roman de la Rose Digital Library website where there are many digitised versions of some of the surviving copies and fragments written between the thirteenth and sixteenth centuries. And for those who would prefer not to wrestle with medieval French there are also English translations on line and in book form. The Hive itself has a copy in English verse translated by Harry W Robbins 1962 if you fancy wooing your Valentine with a few verses.

Since this blog the documents has been studied by Professors Nicholas Vincent and Marianne Ailes. It has been great to have experts on the topic have a look and add to what we know. Marianne thinks that this could be the earliest surviving fragment of the poem, dating to shortly after the composition, making it more important that we realised.

When this news was shared in the autumn it was picked up by press around the world and we were visited by BBC Midlands Today.

You can read more on the University of Bristol Blog.