This year we will celebrate the centenary of ‘The Representation of the People Act’ of February 1918. This Act extended the right to vote in Parliament to all men over the age of 21 and women over the age of 30, dramatically altering the face of British democracy. This act of Parliament also allowed service men as young as 19 to register so that they could vote in their home constituency whilst they were away from home on the battlefields. These lists were known as the Absent Voter lists and they also included eligible women who were serving the war effort away from home. A deadline of 18 August 1918 was set for registration on the first list and a list compiled from applications up to this date was published on 15 October 1918 ready for the general election on the 14 December 1918.

A second opportunity to register was offered after the election and a deadline was set of 18 February 1919. The list resulting from applications received during this second wave was published in April 1919. The absent voters lists were prepared by the local Electoral Registrar and were published twice a year in spring and autumn alongside the general electoral registers. Many service men did not return home immediately after the end on the war and so they can be located in later years on these lists. They were often published as separate volumes to the main electoral registers.

These lists provide a useful resource for those researching soldiers who fought in the First World War in the absence of many service records which have not survived. It is worth mentioning however that they often relied on the application forms to be completed by the families of service personnel at home and therefore not all soldiers are listed and the details of their service numbers and regiments may not always be accurate. Despite this the lists provide a valuable starting point for researchers.

Since 2015 there has been a volunteer project at WAAS to update our existing indexes of absent voters with the addresses of soldiers so that the online indexes include all the same details as the original electoral registration lists. Each index now gives the parish, name, home address, service number, rank and service unit of the service personnel, if originally listed, as well as an indication of where the entry is in the published volume i.e. page number and line.

Our first completed index is that for the City of Worcester in autumn 1918, which we were able to update with addresses and check the details for. As the April 1919 indexes for Bewdley, Evesham, Kidderminster (with Bromsgrove), and Stourbridge already existed this was the ideal database to complete next.  For the 1919 indexes alone the group has spent over 261 hours transcribing and checking 15,921 entries in excel from 429 pages of listed names.

From this we have been able to begin work on the 1918 indexes for the rest of Worcestershire using the 1919 databases as a starting point. The 1918 lists account for service personnel who registered up until August 1918, therefore they have a lot more names which needed to be added, we are also changing details where necessary as we go. These differences are there because some people may have been promoted or changed units in-between the registrations and the details are different between the volumes, names also need adding as some may have been sent home or killed by February 1919 and so do not appear on the 1919 list. These 1918 lists will be added to website as soon as they are ready.

All of our new Absent Voter indexes are live and available to search on our Archives Collections page now. 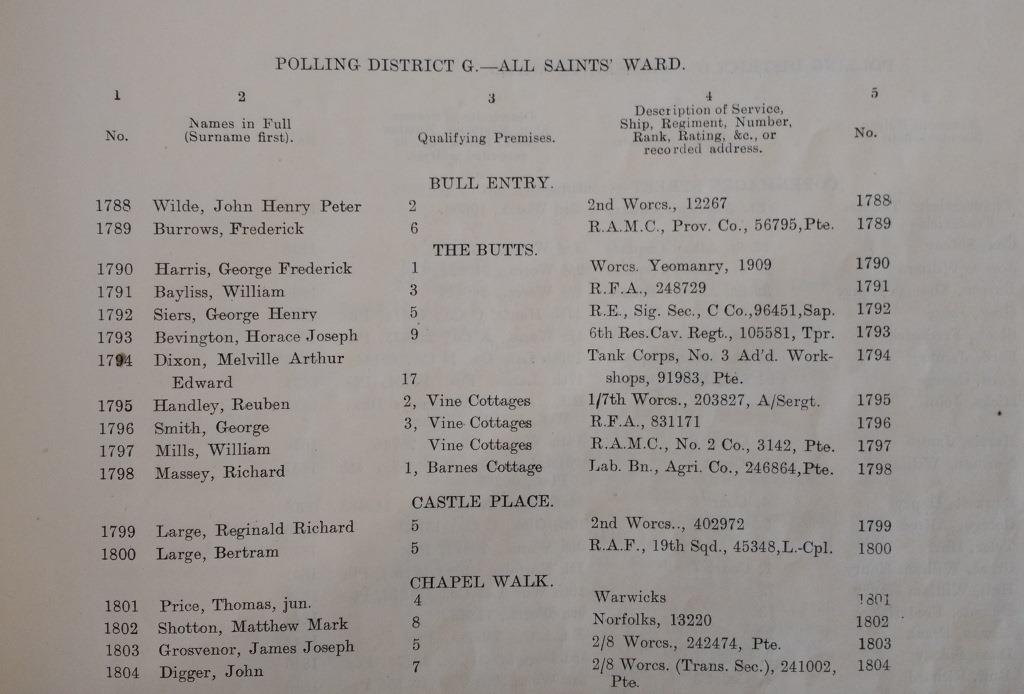 The Three Choirs Festival is the longest running non-competitive classical music festival in the world. Rotating between the English cathedral cities of Worcester, Hereford, and Gloucester, the festival hosts an annual, week-long, summer programme of concerts and services, with an accompanying fringe programme. We’ve had a look in our collections to share some of the...

As part of the Worcester Charter 400 celebrations, we are supporting, there are special essay competitions. Inspired by the 1621 Charter, held in the archives, there are categories for children and adults.

We are pleased to announce electoral register indexes covering 1837-1974 are live on Ancestry at Worcestershire Electoral Registers, 1837-1974 | Ancestry®  They have been created using text recognition software, rather than being transcribed. These registers can help place your ancestors in a particular location and possibly also reveal some details about property they owned. Ancestry...