We recently recorded the farm buildings at Baddesley Clinton, a medieval moated manor site in Warwickshire, now owned and cared for by the National Trust. A close look at the building materials used revealed surprising evidence about where they came from and the people involved in the farm’s construction. 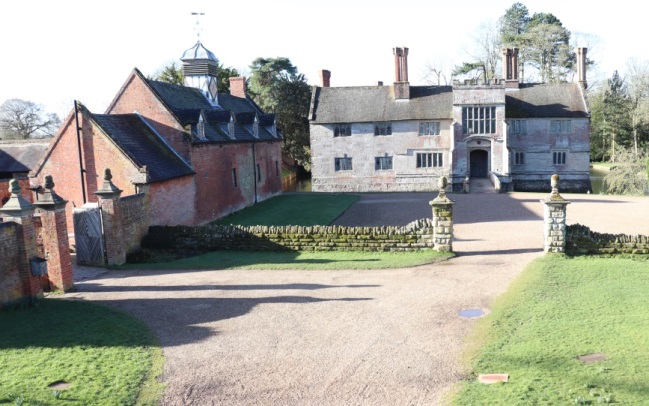 Baddesley Clinton manor house with farm buildings to the left 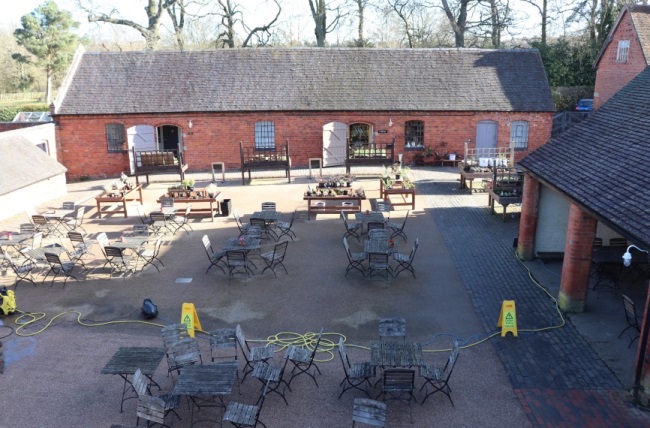 Documentary evidence shows that the farmyard was mostly built between 1714 and around 1760 (Moore and Knox 1990). Materials from this phase of building work strongly suggest the exploitation of local resources to make bricks and source timber. The red bricks consistently contain distinctive inclusions within the clay that suggest a single local source, and the site is known to sit within a band of clay geology suitable for brick production. Oak timbers were also used within these early buildings, which would have been readily available within the Arden region of Warwickshire, or possibly the estate itself.

A hundred years later, historic maps show that a second phase of farmyard building occurred between 1848 and 1867. The bricks used during the 19th century contain the same distinctive inclusions as the earlier phase; implying continuity of source. But where these buildings differ drastically is their timber source, with the later phase using entirely imported softwood.

Take a close look at an old timber roof or building and you’re likely to spot lines, symbols or abstract marks cut into the beams. Timber markings within buildings were made for various practical, spiritual and personal reasons, but are most commonly carpenters’ marks for matching up unique joints during construction. Carpenters’ marks are only found on one face of the timber by a joint and are plainly visible in the earlier, 18th century, buildings (see photos above). These would have been built on site by local craftsmen, as shown by the continuity of carpentry style throughout.

In contrast, a completely different set of marks are visible on the mid-19th century softwood timbers, seemingly randomly placed and irrespective of joints (see photo below). Most of these marks do not make much sense in isolation – to understand them, we need to look at where the timber was coming from. 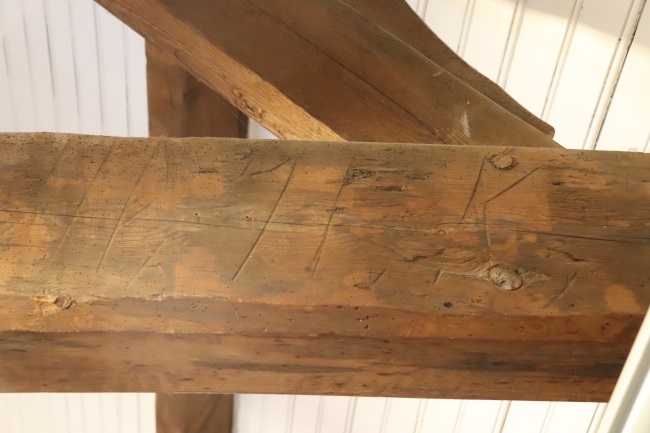 Throughout the 19th century, Britain became increasingly dependent on timber imports; initially from its American holdings, but increasingly from the Baltic region. The Baltic timber trade operated from numerous countries around the sea’s shores and involved countless traders, sawyers and shipping companies. Timber was felled during the winter, when the ground was frozen, by a peasant work force who were otherwise employed in agriculture for the rest of the year. Felled trees were then hand hewn to make a square ‘baulk’ of timber, floated down river to port within a flotilla of other timbers and then sawn into various sizes before shipping (Vandenabeele, Bertels & Wouters 2016). To track the interests of numerous parties involved in this multi-stage process, a detailed system of marking was required.

Left: open fronted shed on the southeast side of the yard (2m scale). Right: Baltic timber mark on the tie beam of the shed – as this is partially lost, the marks must have been incised prior to the squared timber being sawn (50cm scale).

So what of the Baddesley timbers? Let’s focus on one building in particular – an open fronted shed on the southeast side of the yard. Inside the shed, the ‘tie beam’ (horizontal timber connected to the rafters and each wall) has two sets of marks cut on at different stages. The first is a series of marks set within a diamond shaped box cut on with a race knife (see above). This mark is repeated on two other timbers within the structure – all are on hand hewn surfaces and each has been truncated by subsequent sawing of the timber into two. This suggests that the marks were cut on when the timbers were roughly squared, perhaps by a merchant marking their timber flotilla. 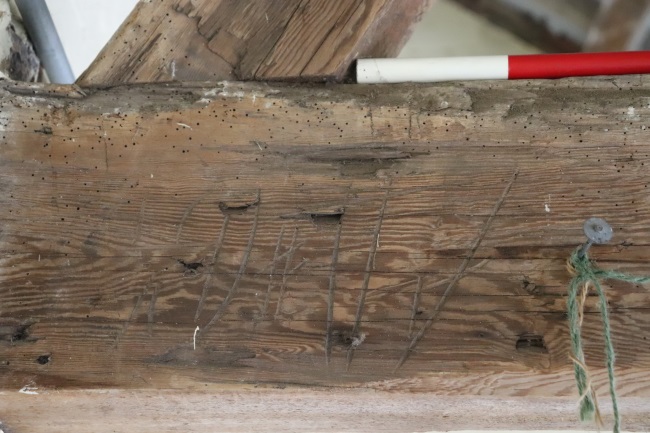 Baltic timber mark on the tie beam of the open fronted shed – this respects the sawn edge, so is likely to have been incised at the port of origin before shipping (20cm of 50cm scale visible)

The second set of marks (shown in photo above) are a series of lines, which is a more common form but difficult to interpret in their own right. It is evident though that they were incised after the timber had been sawn in two, as they respect the beam’s edges. Documentary evidence clearly records that the process of sawing took place at ports, before timbers were shipped to their destination. So, from this single piece of timber it may be possible to see evidence of its initial rough squaring, potentially in the woods straight after felling, the timber being marked by a merchant, sawn at the port and then further marked before its eventual export to Britain.

Through carefully inspecting and recording the fabric of historic buildings, as we’ve seen here with the farm buildings at Baddesley Clinton, it is possible to gain a picture of the local workforce who made bricks and managing woodlands for their eventual use as building timbers. What often gets lost within this is the connect, created by 19th century industrialisation and ever improving transport links, with workforces local to the frozen forests of the Baltic region, as well as the river traders, sawyers, dock workers and seamen.  Their impact upon the fabric of these buildings is not immediately obvious, but remains for those who closely observe.

Vandenabeele, L., Bertels, I. & Wouters, I. 2016 Baltic shipping marks on nineteenth-century timber: their deciphering and a proposal for an innovative characterization of old timber. Construction History, 31(2), 157-175