In 2018 Historic England funded Worcestershire Archive and Archaeology Service, in partnership with Worcester City Historic Environment Record, to fully catalogue the practice archive of F.W.B and Mary Charles Chartered Architects. A selection of the archive was subsequently digitally captured and the resulting images have been made publicly accessible online.  Now, in 2019, The Vernacular Architecture Group (VAG), alongside Historic England, is kindly supporting a second stage of the project to digitally capture the entire slide collection, which will also be made accessible online.

F.W.B. “Freddie” Charles (1912-2002) was an architect and nationally recognised expert on the conservation and repair of timber-framed buildings. Freddie and his wife Mary, also an architect, set up in practice in the mid-20th century and were amongst the first to face the challenges associated with timber conservation. They were involved with the restoration of many important timber-framed buildings during their career including the Ancient High House in Stafford, The Old White Hart Inn, Newark (Notts) and over 250 buildings in Worcestershire, many of them of national importance. Their publications included the seminal Conservation of Timber Buildings, first published in 1984, Medieval cruck-building and its derivatives: A study of timber-framed construction based on buildings in Worcestershire (Society for Medieval Archaeology. Monographs; no.2 – 1967) and The Great Barn of Bredon: Its Fire and Reconstruction (Oxbow Monographs 1997).

The practice archive of F.W.B and Mary Charles was deposited with the Worcestershire Archive and Archaeology Service (WAAS) in 2002.  The holdings for Worcestershire contain material relating to a wide range of secular and ecclesiastical buildings.  Vernacular cottages, farmhouses and agricultural buildings including barns, cider houses and perry mills are well represented, alongside examples of townhouses and other urban forms from historic centres including Bewdley, Bromsgrove, Droitwich, Evesham and Worcester. 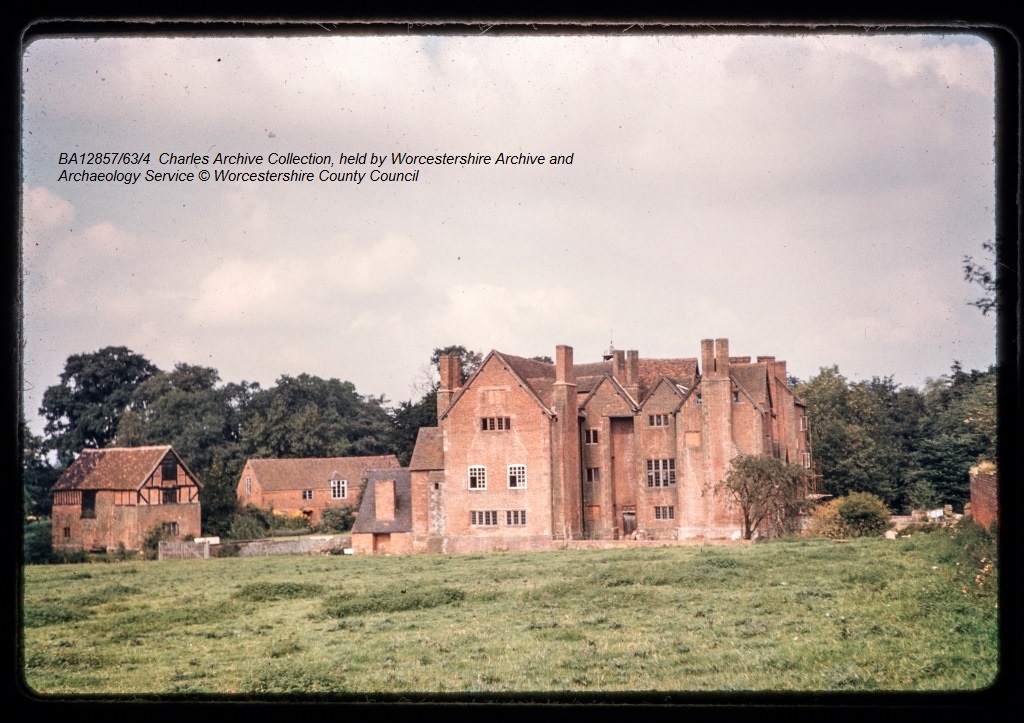 During the course of the project, it became clear that there was a sizable collection (c.2000) of slides within the archive that would benefit from being made digitally accessible. The slides form an important element of the collection and largely document buildings during the course of their restoration and repair, they therefore form an important record of the history of those buildings.  The slides also provide information that will be useful for any future conservation work. In their current format they are less accessible than the rest of the physical collection and at greater risk of future deterioration as they are more fragile than the paper records.

The 2018 project did not have the resources to include all of the slides in the original project digitisation (although 127 were digitised). The Vernacular Architecture Group and Historic England are now providing funding to add this important element to the digital collection.  The images already captured are available online through the Archaeology Data Service (ADS) website, and through the Worcester City and Worcestershire County Historic Environment Records.  More details about the project can be found at