We are very lucky in Worcestershire to have a diverse range of ‘Community Halls’ of different dates and character. Studying these small and rather unassuming buildings can better our understanding of communities and how they have changed. 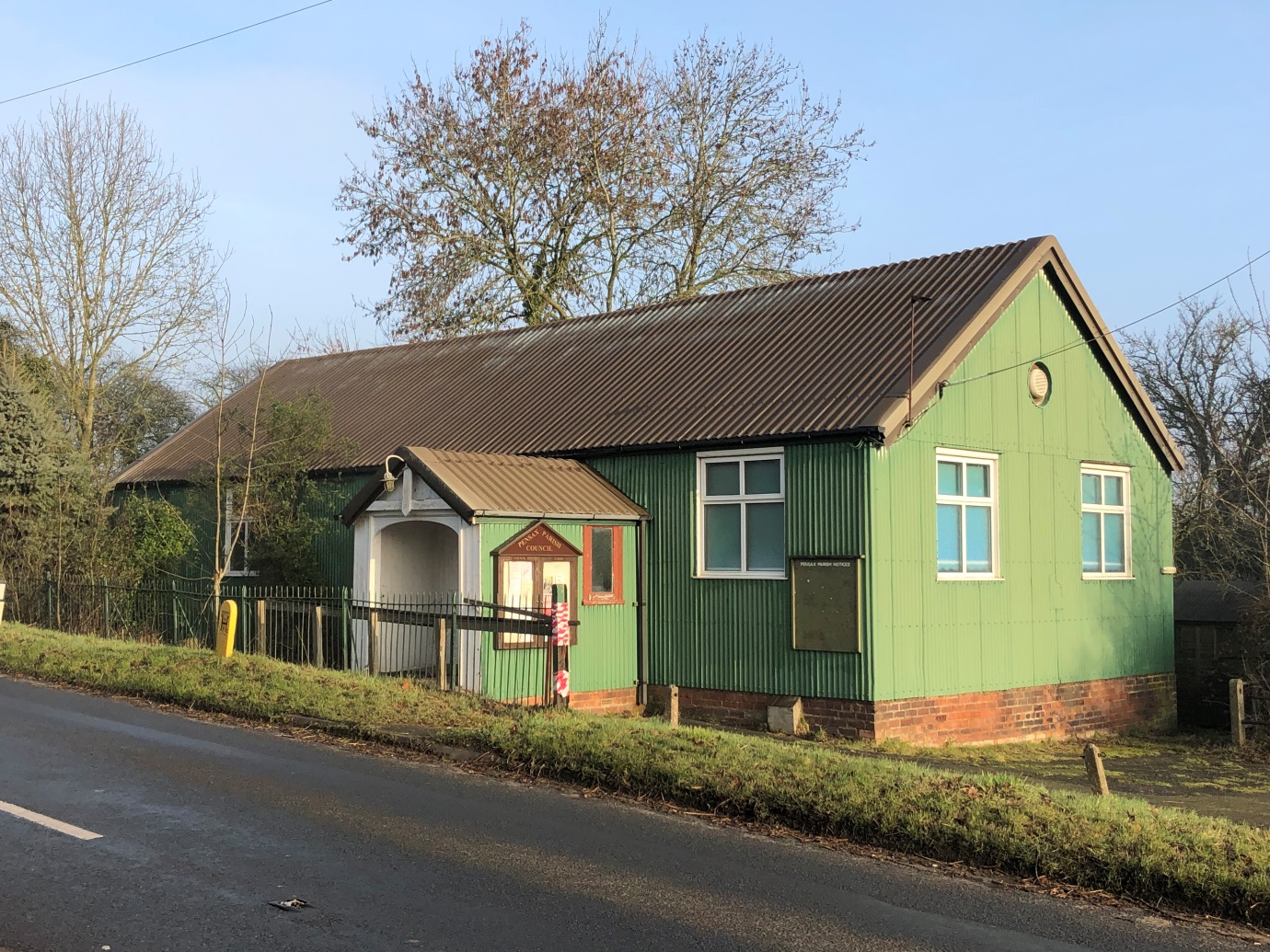 The majority of ‘Community Halls’ date from the mid-19th century onwards. Many early examples were constructed as reading rooms or working men’s club. Lindridge Parish Hall, for instance, opened in 1906 as a reading room for the Eardiston Farming Company. In 1939 the building and its surrounding land was gifted to the parish council, by the owners of the company providing that there was no gambling or consumption of alcohol within the building unless under exceptional circumstances (this rule being the most likely reason why a working man’s club was built at the rear of the site in 1948). Possibly as the century went on and women were allowed more freedoms, these became places for everybody in the community to enjoy, hold meetings and community events. 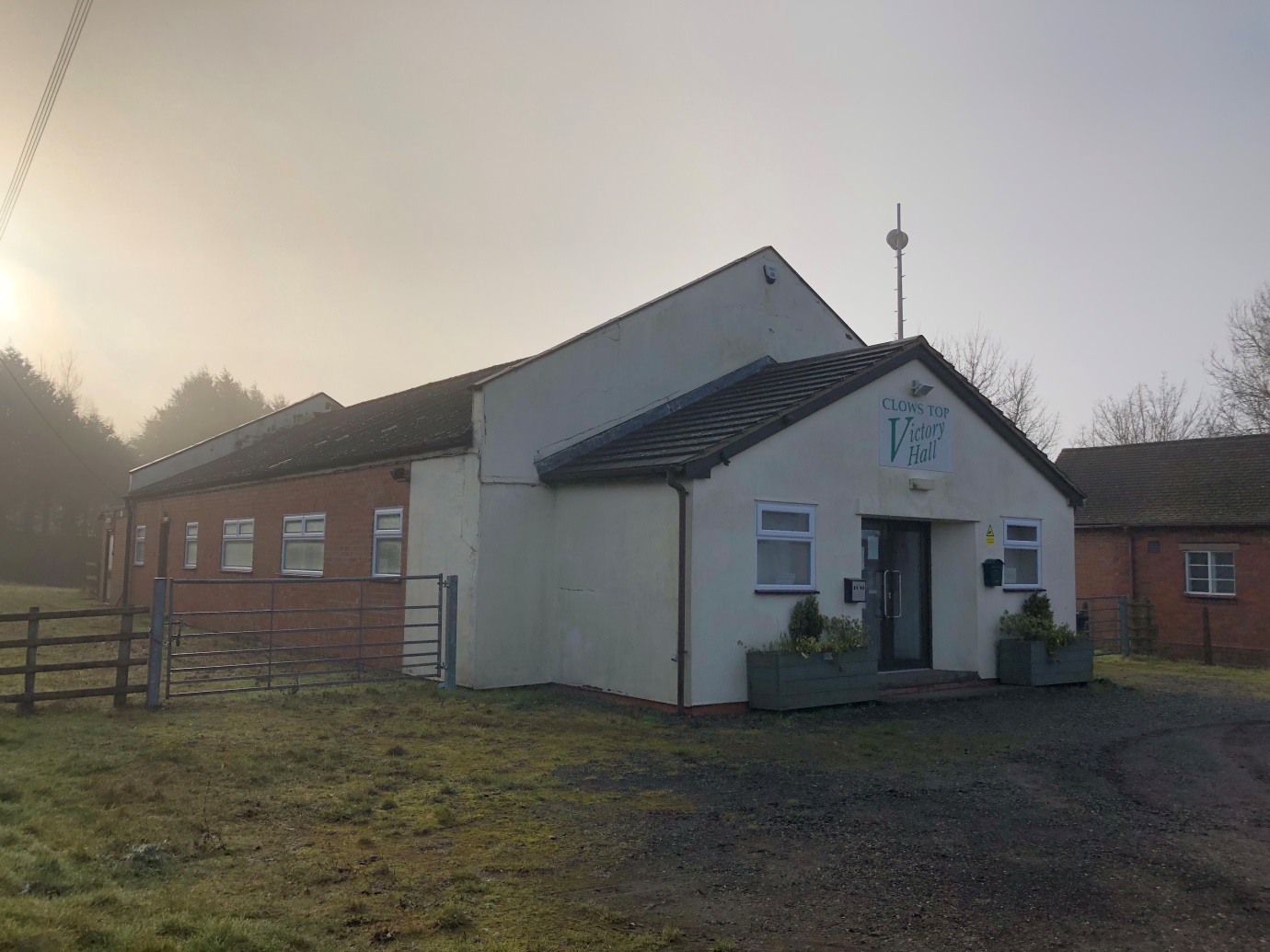 There are 3 main types of ‘Community Hall’ found in rural landscapes across Worcestershire: Village, Parish and Memorial. Village Halls are for communities with the purpose of holding meetings and events. Parish Halls have a similar role but on a larger scale. Memorial Halls are built to commemorate an event or person; the majority having been built in remembrance of the World Wars, although others have been built to commemorate important local people. In Worcestershire we also have one example of a Victory Hall; Clows Top Victory Hall was built in 1953 to celebrate victory in the Second World War. From the inter-war period new halls called ‘Community Centres’ were built in developing urban estates and suburbs. Generally funded by local councils and promoted by the National Council of Social Service, these buildings held the same core purpose as their earlier counterparts and were viewed as centres for recreation, culture, health and welfare.

Many halls were funded by local benefactors or through community fundraising projects and were purpose built to meet the needs of the local community. The construction of Drakes Broughton Village Hall, for example, was spear headed by Tom Lewis after there was some leftover money from the Queen Elizabeth II coronation celebration. Additional funds were raised though village events such as the annual ox roast and flower show. The hall was completed in 1958. In the 1990s an extension was added called the Lewis Room to commemorate the work Tom Lewis had put into the creation of the hall.

During the Second World War Community Halls were crucial to the war effort. The majority were requisitioned as first aid points; others were used as headquarters for the local Home Guard. The Village Hall at Stoke Prior, for example, was used to hold lectures for all sections of the Stoke Prior platoon. Others were converted into factories like the former Village Hall at Abberley (St. Georges Hall), which opened in 1937. Before the Second World War the hall was predominately used as a dance hall as it had a sprung floor. Hurry Areo Ltd. took over the building during the war to produce munitions, as a result of the mass quantities of water needed during the manufacturing process the floor was ruined and collapsed in the 1960’s.

Some Community Halls played a very large part in the war. During the Dunkirk evacuation, between 27th May to the 4th June 1940, in which over 338,00 people were brought back to Britain, numerous buildings across the country, including Cleeve Prior Village Hall, were used as billets for solders. Overbury Village Hall was requisitioned in 1940 and used by staff by the Bank of England until 1942.

Within Worcestershire we have some wonderful examples of ‘Community Halls’, if you are in the area they are definitely worth a visit! The following halls are some of my favourites. 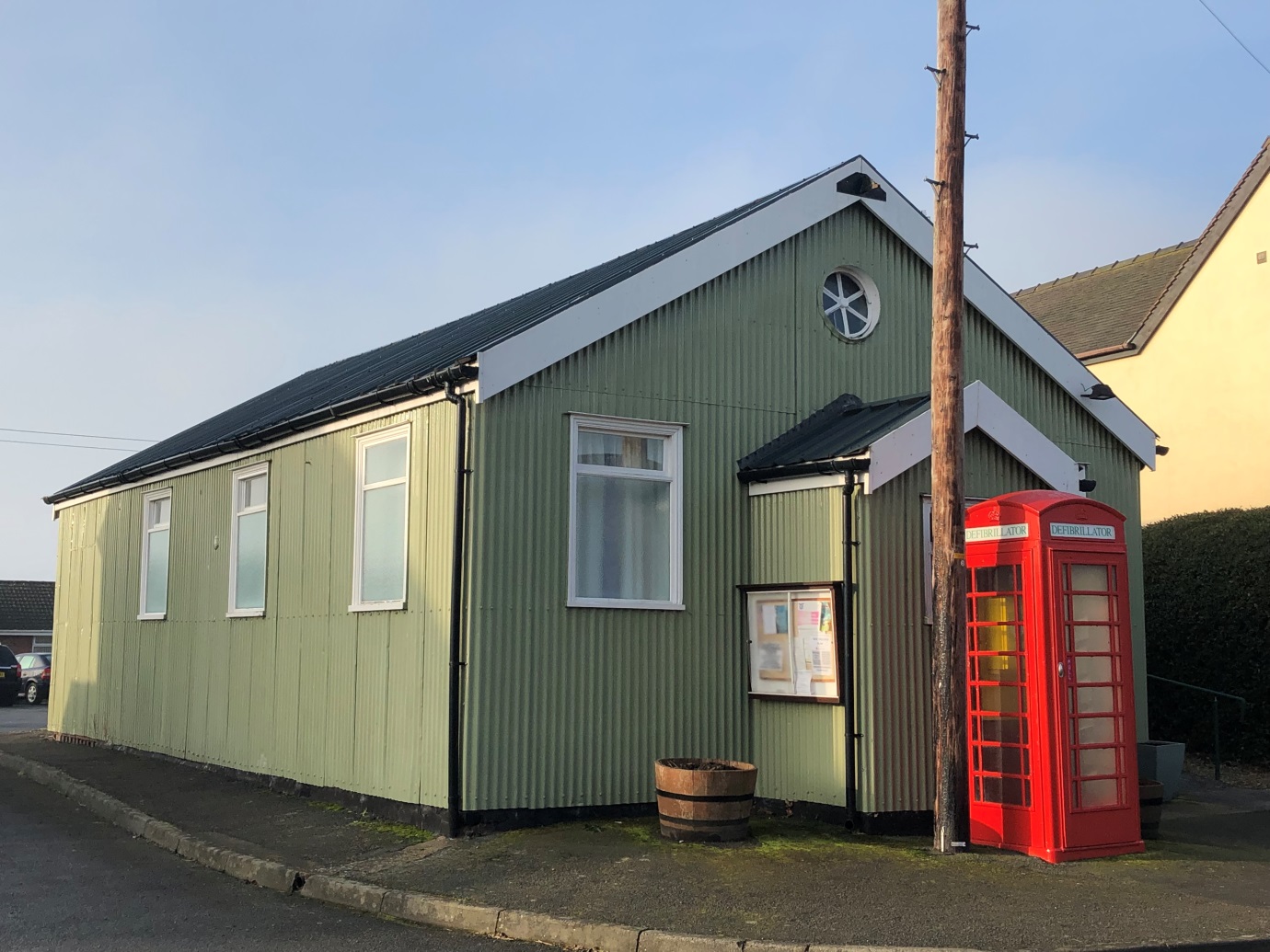 Mamble Village Hall is one of a declining number of pre-fabricated corrugated iron halls. It is painted dark green which provides an excellent contrast to the red telephone box that it hides behind. The hall is well loved and maintained by the community; in 2015 it celebrated its 100 year anniversary. 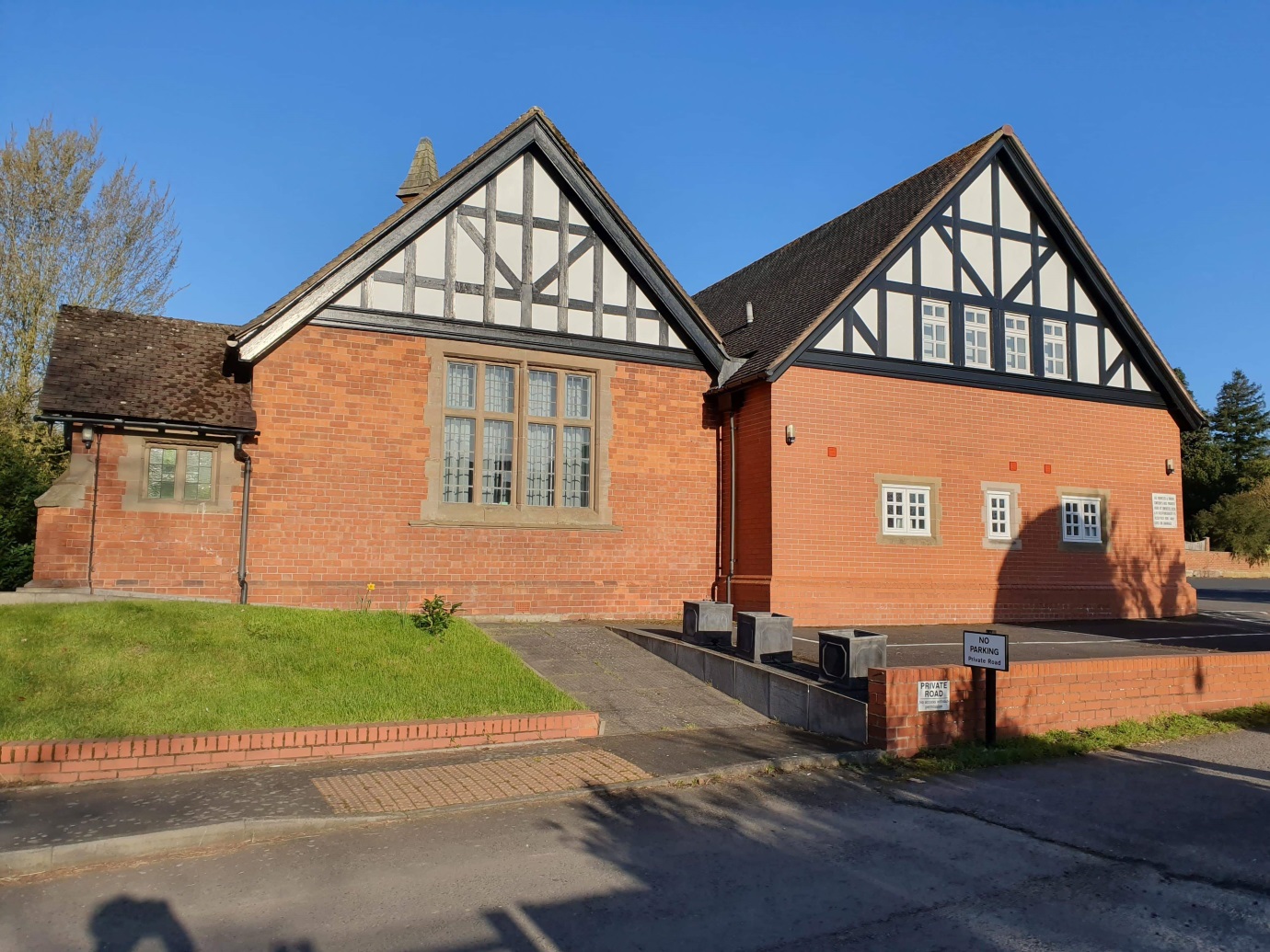 Chaddsley Corbett Village Hall is not only a beautiful building; it also has an interesting origin story. Funded by the Rev. William Finch to commemorate Queen Victoria’s Golden Jubilee, the hall was originally built as a reading room. The Rev. Finch specified that the hall should be built outside of the village and away from any of the local pubs or inns so that young men had a quiet place to read. The hall was closed for extension in 1996 and reopened in 1997, the image of the village hall above showing that the extension was built in keeping with the older building. 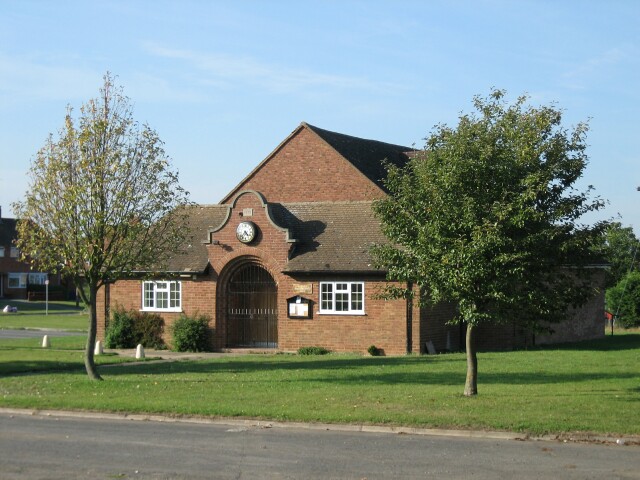 Badsey Memorial Hall was built in 1955 in recognition of war veterans. The arched gateway and Dutch Gable with its clock adds interest to its otherwise simple design. 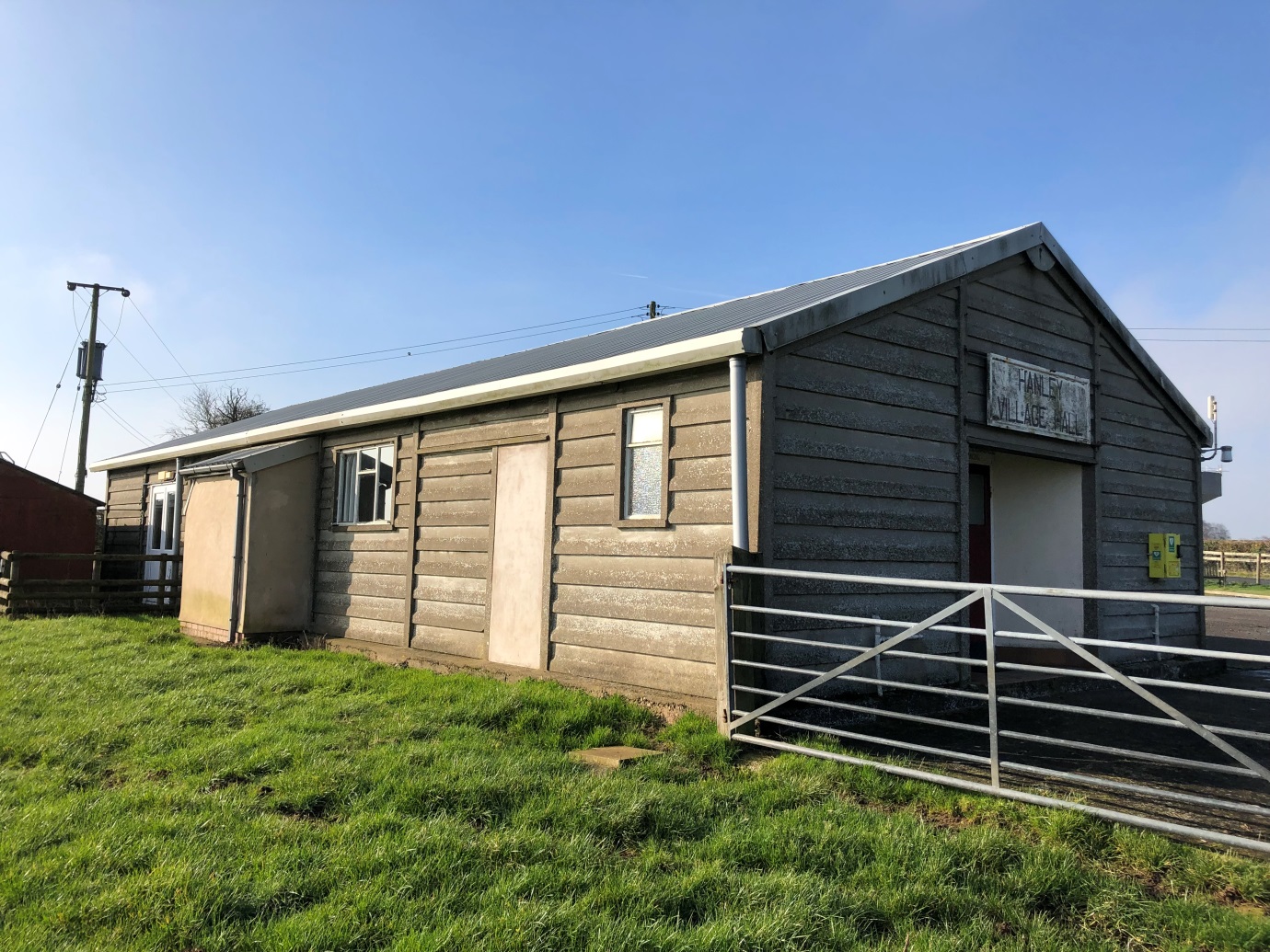 Hanley Broadheath Village Hall is constructed of precast reinforced concrete, with red painted doors and metal windows. Believed to be dated to 1956 and reputedly funded by local collections and built by village volunteers over 5-6 years, the hall displays a sign above the door ‘licensed in pursuance of the Public Health Act 1936 for Music, Singing and Dancing’. 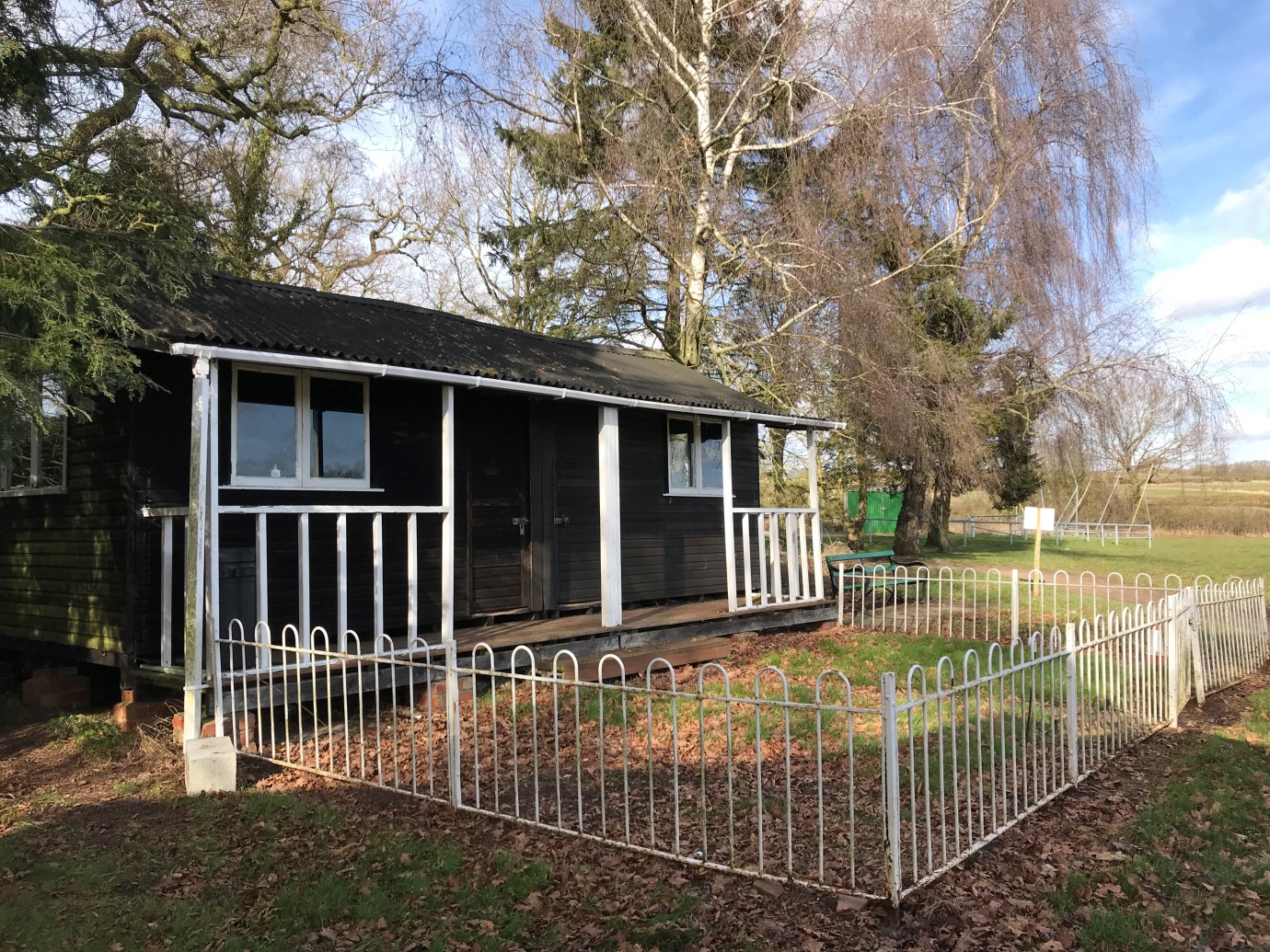 Many halls were built with, or adjacent to, community green space, for recreation and sporting activities. This wonderful wooden sports pavilion, opposite Hanbury Village Hall, is a lovely addition to the village Recreation Ground.

This blog piece is one of a series of articles that form part of the project – Adding a New Layer: 20th-century non-domestic buildings and public places in Worcestershire. The project aims to identify, review and record 20th century non-domestic buildings and public places, many of which are highly valued by local communities but are increasingly at risk of redundancy and demolition. The project, which is being funded by Historic England, also aims to strengthen the public’s awareness and appreciation of 20th century heritage, its conservation, value and significance. There are over 14 articles on different types of buildings available on our project page.

This guest blog was written by Sophie Hobday, a university student, on placement with Worcestershire Archive and Archaeology Service.