Over the last few year we have shared the letters of Gilbert Clements through readings by Naomi Taylor. This was part of Worcestershire World War One Hundred project. The readings were aimed at making these letters more accessible by making them sharable on social media and for people to be able to listen to them.

Bert was a Kidderminster man who served in WWI in the Royal Artillery, joining on 21 September 1914, around 6 weeks after war was declared. He was born in 1894, living in Lea Street and going to Lea Street School. He did survive the war (it is always strange going through war letters half expecting to come across a telegram at the end sent to a man’s parents). On his return he married Winifred in 1924 and stayed in Kidderminster. After his death his family passed the collection of over 20 letters to the Record Office so that other people could read them. 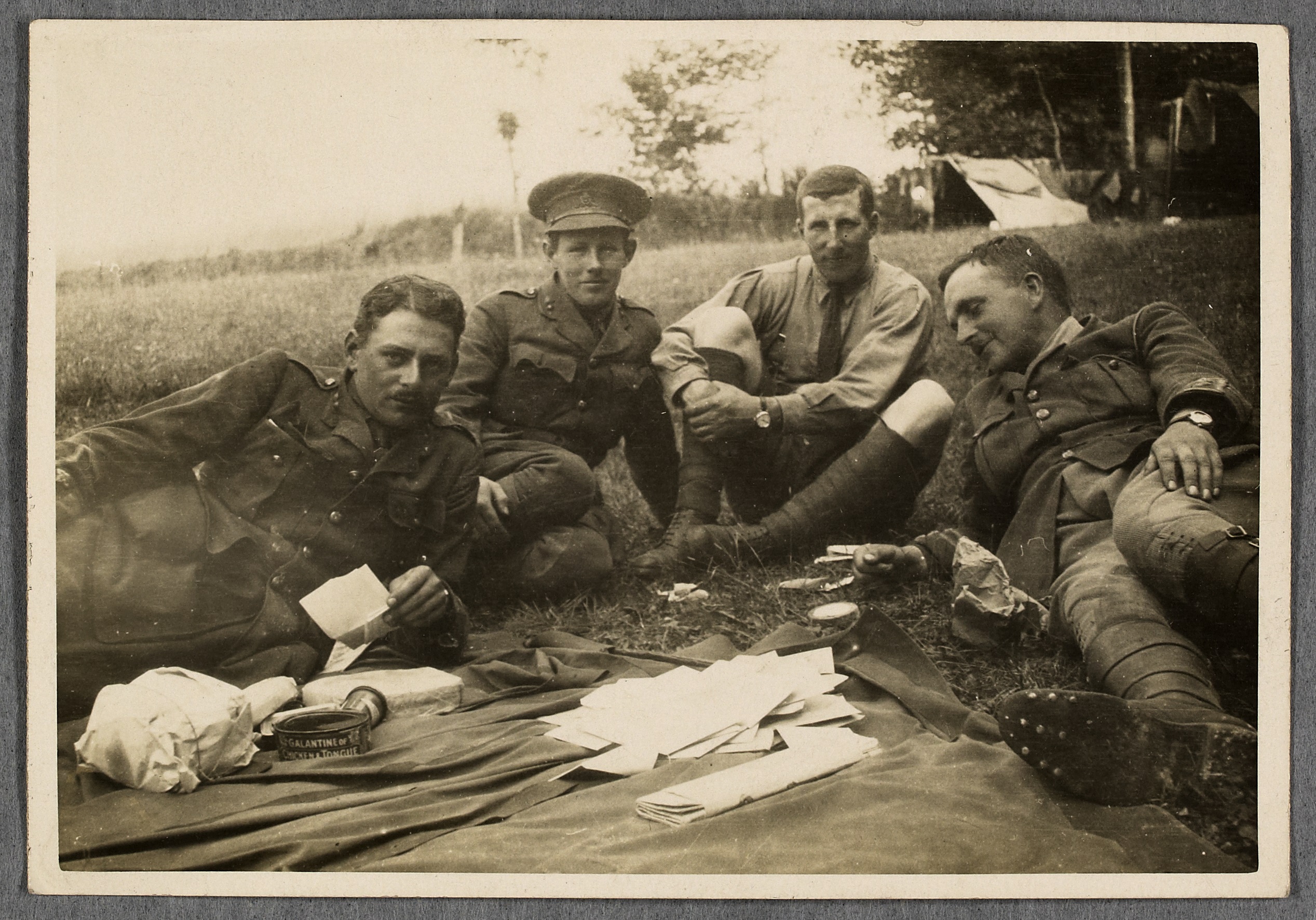 A photo that came with the letters. Is Bert one of these men, or is this a photo of a friend which was sent to him? Sadly we don’t know.

A lot of information about the First World War is at a high level, giving information about armies and nations. Letters by an individual provides a more personal insight. They also show that the war is full of different people, and not everyone may have felt the same way and had the same emotions or experiences. We used the letters with local schools as the films enabled the children the access the content without having to read the handwriting (although we did take in the letters so they could see real objects 100 years old). One thing that came out was that he came across more positive and optimistic than they expected, and spoke in more detail than they thought he’d be allowed. Although it is hard to know if the letter fully represented his feelings.

Sadly, like almost all WWI letters, we only have one side of the conversation. It is unlikely he could have kept letters from his Dad when out in the trenches and moving around. It is also probable there are other letters Bert sent home which didn’t survive.

We’ll reshare the clips across 3 blogs

This is the first letter by Gunner Gilbert Clements.  This letter is a quick note whilst he’s still in this country, and reminds his father about the soldiers needs for cigarettes!

This is the second of Gilbert Clements’ letters. He is now on active service and has had his first experience of the trenches.

Bert’s next letter describes how he is now looking after the telephones, which includes having to repair them under fire. He also talks about some of the parcels he’s received and shares news.

Bert’s 4th letter describes conditions in the trenches and how he has fired back at the Germans, although the rifle gets hot after a while.

As the weather gets warmer Bert describes sleeping out under the stars. However to get a bath they need to march 12 miles to the nearest facilities. A pork pie has arrived from home which he appreciates.

A parcel has just arrived from home, including a pipe so he doesn’t have to smoke cigarettes anymore. He sends a quick letter home to thank people.

Gilbert writes from ‘somewhere in Belgium’. It is very hot, and his thoughts return tom home, wondering if his father has gone fishing so far. He is also passing on the message to check if the cricketers will be sending anything out. During the writing of the letter the Germans begin a bombardment.