In The Hive atrium are four large mosaics of photos, with faces made up of hundreds of photos. Moving to The City is a 2 year arts and archive project working with local community groups. Using the archives as inspiration, and photography as a way to engage and work with people, we explored the idea of moving to Worcester, peoples own family photos, and the diverse cultures of people who call Worcester their home. We were really pleased to have the Mayor of Worcester, Allah Ditta, join us for our official launch. 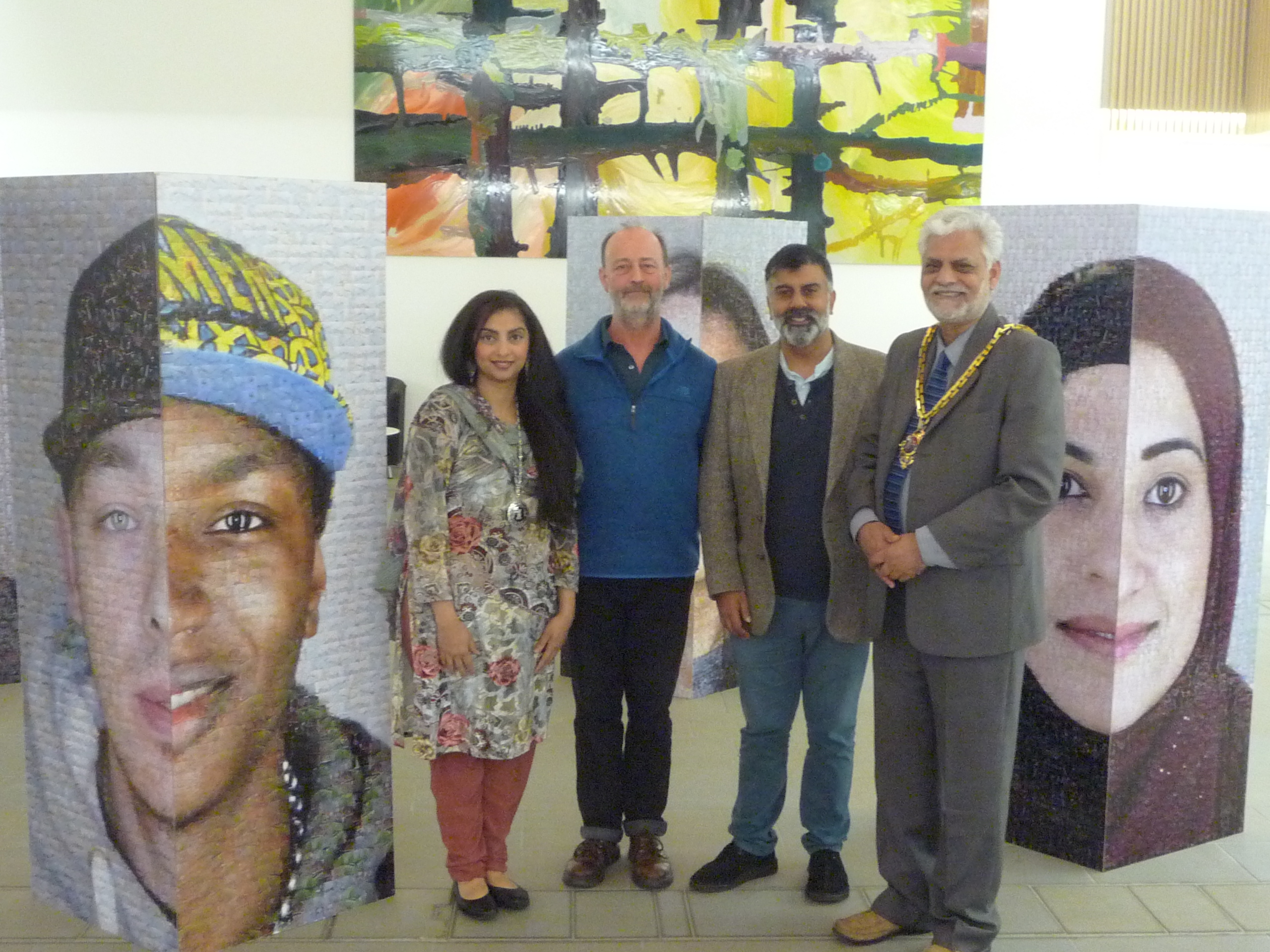 The Mayor of Worcester, Allah Ditta, with his daughter Parveen Akhtar, Justin Hughes (Project Officer) and artist Anand Chhabra, alongside the mosaics.

In 2018 we commissioned artist Anand Chhabra, with funding from Arts Council England, to work alongside communities who have come to settle in the City of Worcester with the theme of ‘Moving to the City’ as an arts project. This links to one of the core values of The Hive, a sense of community as the focus and its use as a facility for learning.

During his residency Anand has engaged with groups around Worcester to work with him through photography workshops. The result has been co-creating a 2D work of art that pictures the people who have moved and settled here.

All the projects conducted with community groups have worked on the thread which details the wider community’s migration to Worcester. 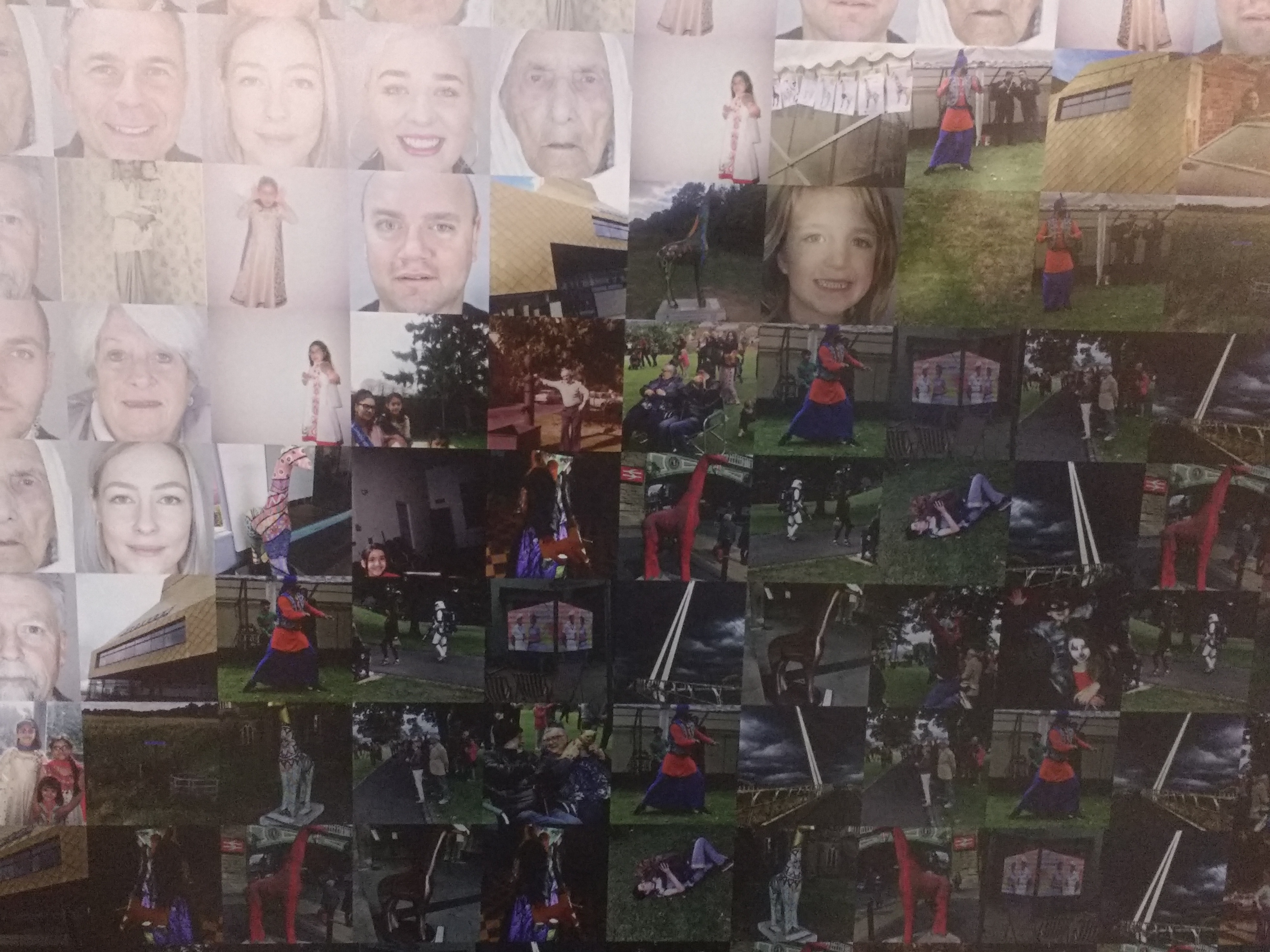 Close up of the art, showing some of the photos which make up the faces

All these projects have been collated towards creating a mosaic of images and most have been included in the final artwork.

Anand was keen on creating portraits that reveal the very ethnicity and individuality of people photographs and to form the main template for the arts project, creating a series of mosaics where he has put together two people whose faces match and yet are distinctly from another part of the world. By doing this it sends out a statement that although as humanity we are diverse with our own language, culture and yet we have so much in common with one another. This artwork indeed with the whole residency aims seeks to work for cohesion between communities and promote respect of difference.

It has been great working with Anand and the different community groups and the use the archives with diverse groups of people, including many who’d never used us and unaware what archives were, but who were fascinated with what was held here. 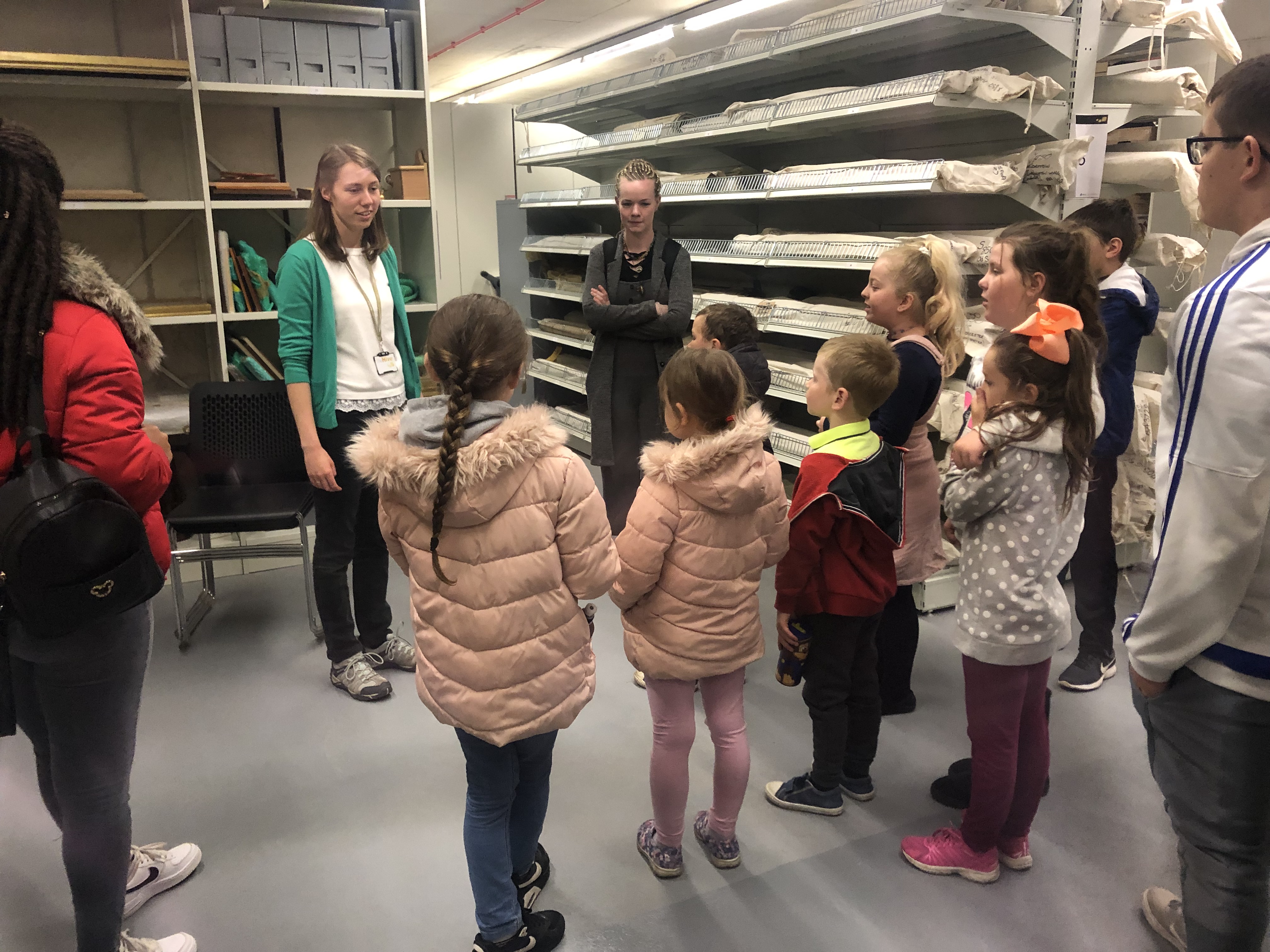 Visit to the Archives. 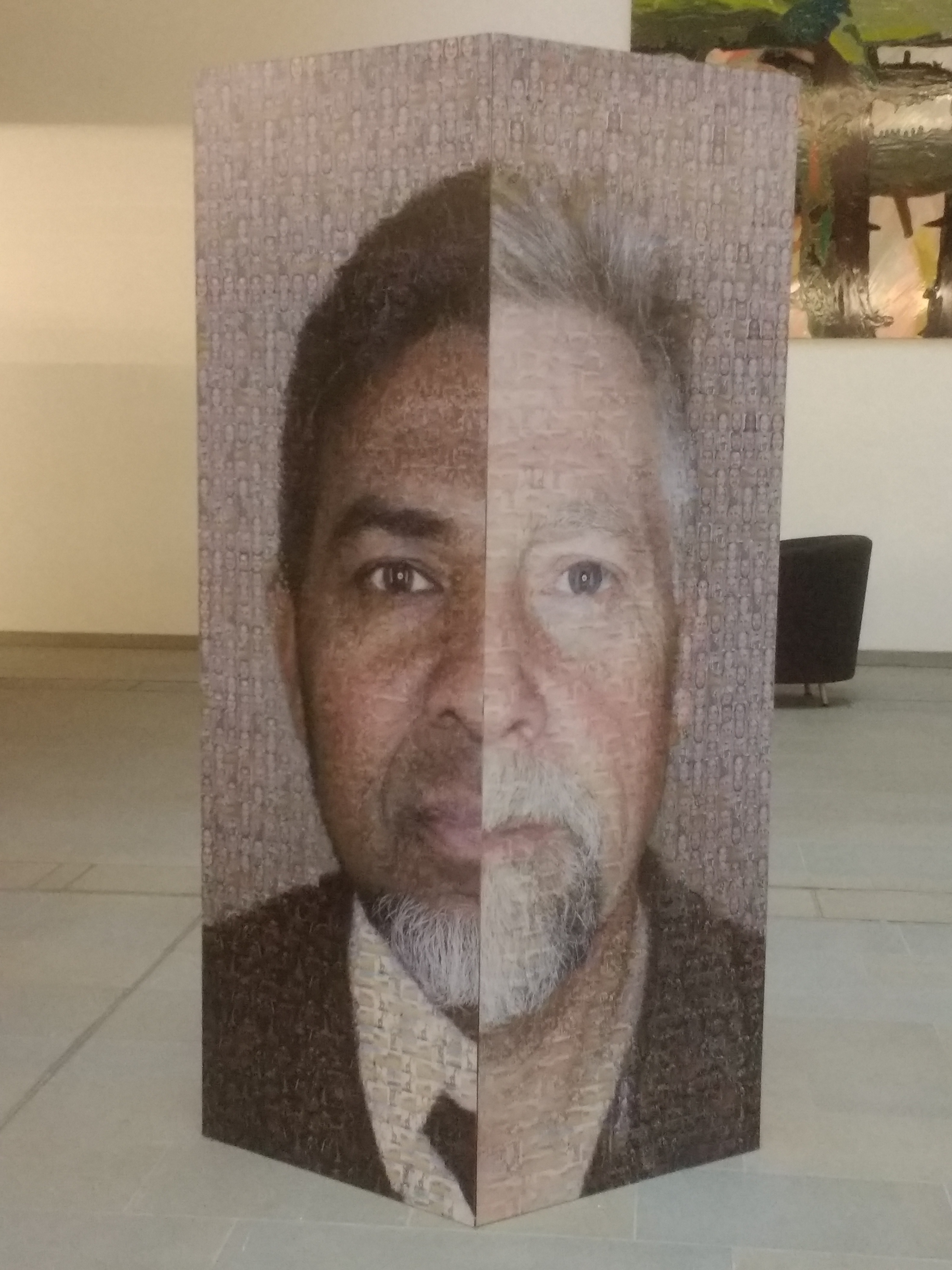 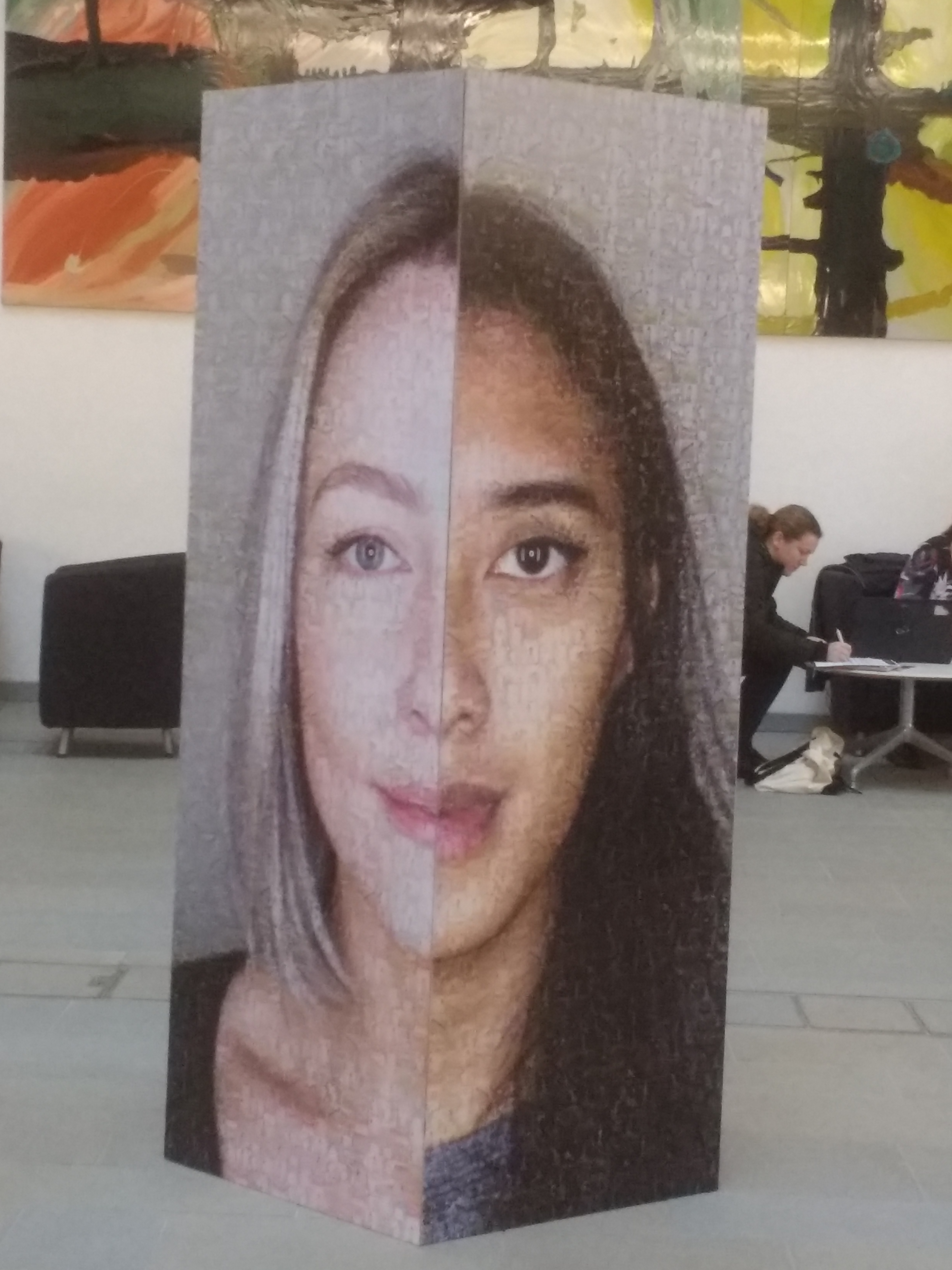 The art will be on display until 27 February.

Thank you to Arts Council England for funding this project

No One Left Behind

We are pleased to announce that resources created in partnership with Museums Worcestershire to support heritage venues and organisations are now live! Videos and toolkits were created as part of the No One Left Behind Project, aimed at helping heritage organisations as they move forward after the pandemic.

Rhonda, our Conservator, does amazing things to repair and conserve our documents. Currently she is working on 15 boxes of wills, thanks to funding from National Conservation of Manuscripts Trust.

New Explore The Past podcast!

We've just published our first podcast! Using interviews we recorded as part of the Market Gardening Heritage Project the podcast has just gone live. have a listen and hear tales and memories of this important local industry.