Allotments are an everyday sight, but their story is worth a second look. Having expanded during the two world wars, their tale reflects the history of the county. As part of the 20th Century Heritage Project we dug deeper into the history of allotments, their development and current status.

The 1908 Small Holdings and Allotments Act established the framework for the modern allotments system, placing a duty on Local Authorities to provide sufficient allotments, according to demand (Hathaway and Lake 2017, 17). These powers were strengthened by the Allotments Act 1922 and subsequent Allotments Acts up until 1950. The Defence of the Realm Act (DORA), which was passed on 8th August 1914, gave the government wide-ranging powers to requisition buildings or land needed for the war effort. This enabled large swathes of land to be requisitioned for allotment gardening, so much so that by the end of the war there was an estimated one allotment for every five households (Way 2008, 18).

That the war-time allotment-holder has rendered magnificent service during the past year is, incontrovertible. In no small measure he has added to the food supply at a time when a grave shortage was imminent’ GW Butcher (1918) Allotments for All.

Despite the provision of allotments for returning veterans, by Local Authorities and veterans housing charities, who recognised the physical and mental health benefits of allotment gardening, much of the land requisitioned during the Great War was returned to its former use. 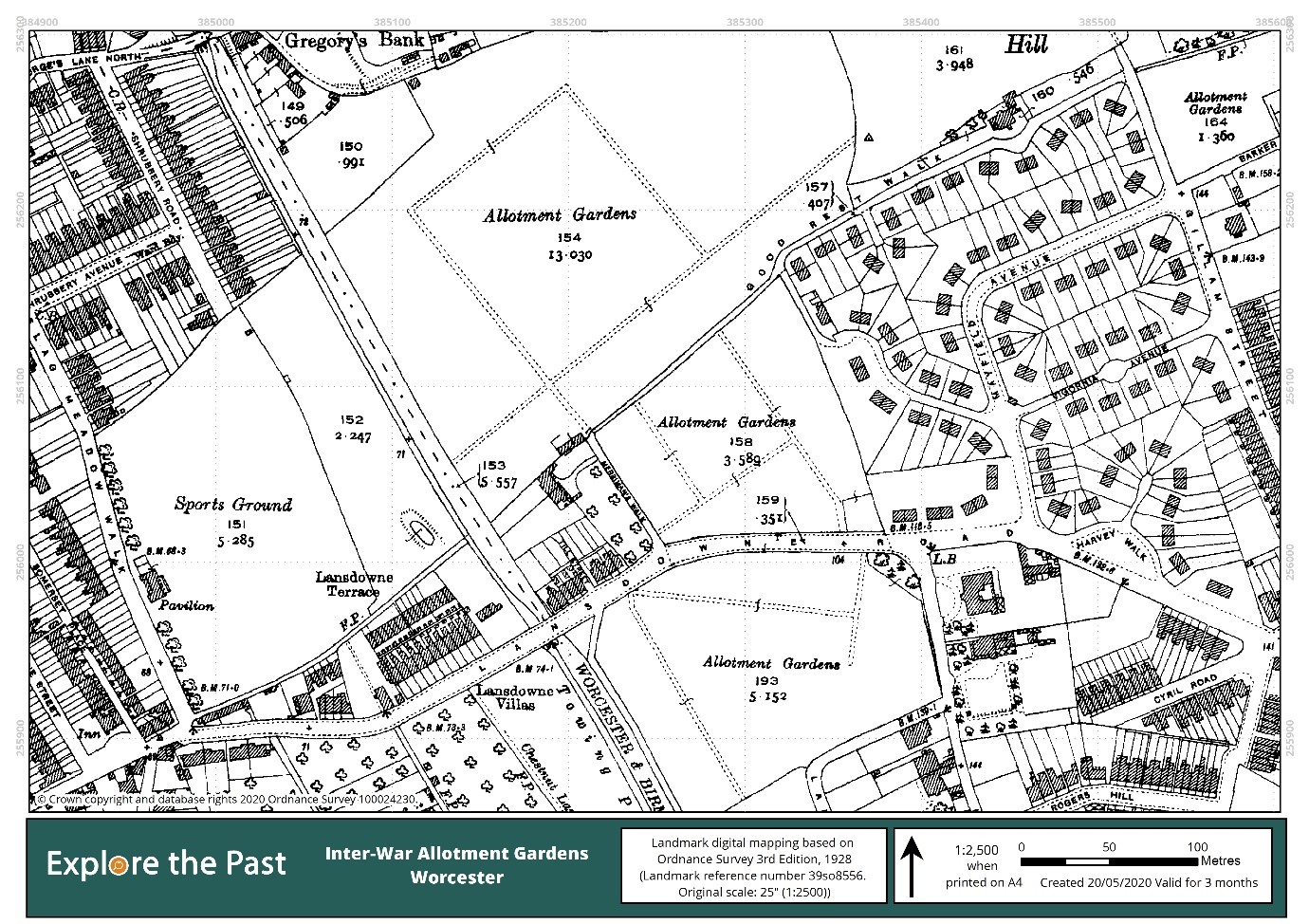 The form and shape of allotments may differ according to the period they were set out; they can be relatively small strips or large areas. These Allotment Gardens were developed, in Worcester, during the Inter-War period. Now largely developed for housing, the southern most garden survives as one of 23 allotment sites within the city boundary.

Numbers of allotments continued to decline until their resurgence during the economic depression which followed the global stock market crash of 1929. At the onset of World War II Britain imported over 70% of its food supply. As rationing took hold, open spaces across the country were transformed and, invigorated by the ‘The National Grow More Food’ or ‘Dig for Victory’ campaign, the humble allotment garden was declared the ‘possible saviour of the country’. 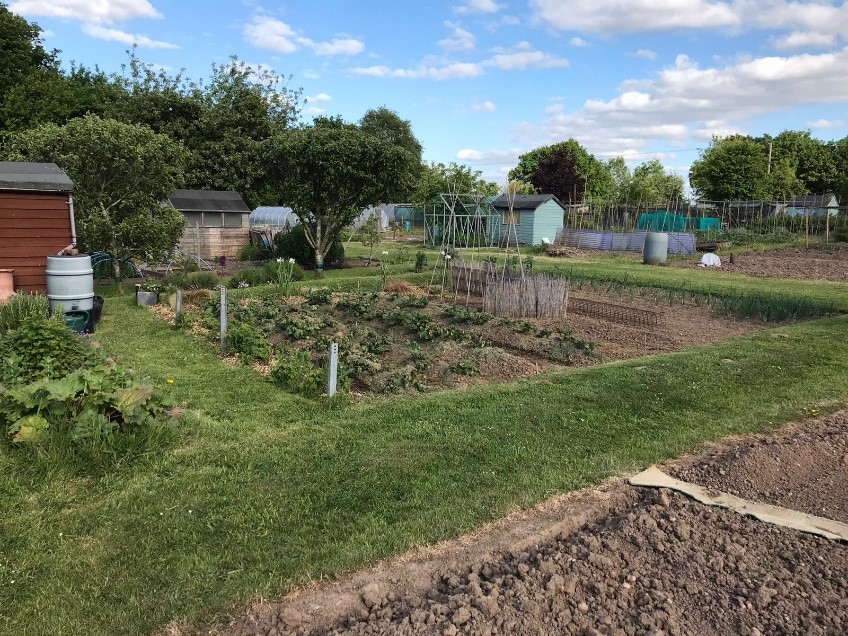 Post-war reconstruction and changing culinary and leisure patterns once again contributed to a decline in the demand for, and the provision of, allotment gardens. With the withdrawal of government support in the late 1950s many sites were redeveloped for housing. Despite a brief resurgence in the 1970s the numbers of allotments continued to fall throughout the 1980s and 1990s. Since the early 2000s concerns about food security, sustainability and the physical and mental health and well-being of the nation has encouraged the regeneration of existing allotment gardens as well as the formation of new sites (Acton 2011, 46–58).

As well as being significant for their landscape, historical and communal value allotment gardens are often home to a wide variety of wildlife. Slow worms, for example, love the mixed habitat of tended and untended plots and marginal grassland. 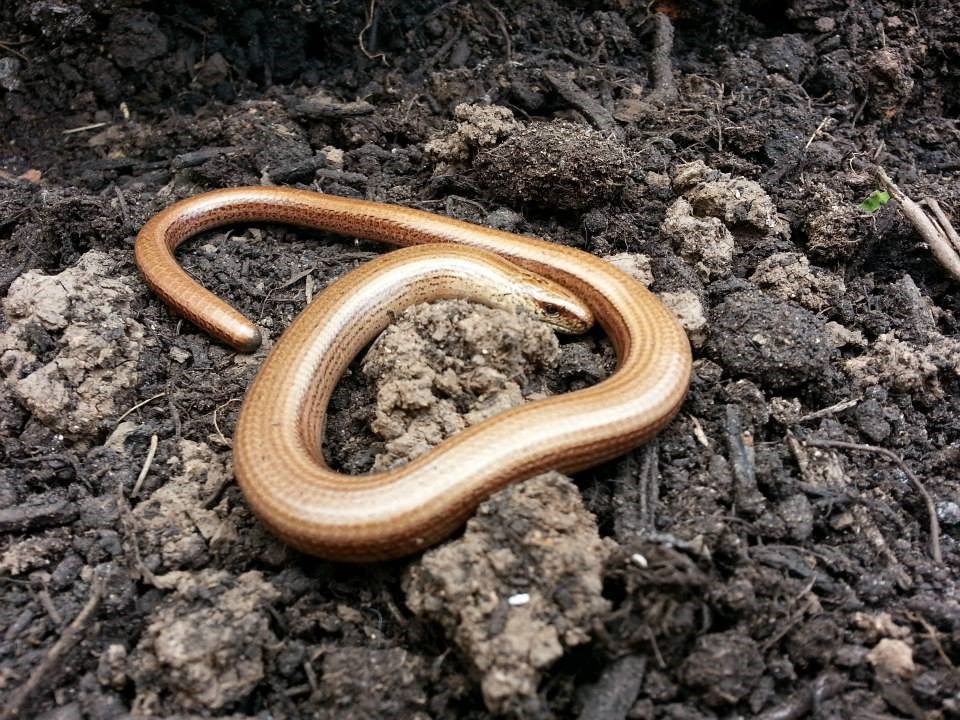 Some of the larger allotment sites in Worcester have been designated as Local Wildlife Sites as a result of their Slow-worm populations. Photograph © A Webley

Acton, L 2011 Allotment Gardens: A Reflection of History, Heritage, Community and Self.  Papers from the Institute of Archaeology 21,  46–58 Available here [Accessed 2018]

Butcher, GW 1918 Allotments for All: The Story of a Great Movement: G Allen & Unwin, London

Hathaway, E and Lake, J 2017 Your Place Matters: A Guide to Understanding Buildings and their Settlement in Rural Worcestershire: Worcestershire County Council and Historic England

Last  summer we gave an overview of 50 years of digging. Excavation is one of the main aspects of archaeology which people think about, and we’ve done plenty of that here over the past half century. Another important part is the Historic Environment Record (or HER), previously called Sites & Monument Record, which we have...