A lovely little find where it shouldn’t have been

A very small Roman coin found in blackish sandy fill among deposits of occasional pottery sherds. With coinage being quite a commodity, what was it doing there?

It’s only a coin

You might think that finding a coin might be a regular occurrence on a dig site with Roman finds, but in fact they are not that common, so to find one is quite exciting.

What is even more incredible is that it was found in a very dark deposit, near the bottom of an excavation so well spotted by our field archaeologist!

The maximum diameter of the coin is 19 mm; and it’s around 1 mm thick (very thin) made of a copper alloy.

Because acids from fingers can corrode the coin and the thinness made it too delicate, we didn’t want to touch it too much, so the reverse is not clean – we are awaiting a specialist to do that and accurately identify it.

It was found at the very bottom of what seemed to be a collapsed fill or pit, while cleaning it to take a photograph (see the label in the lower right of the picture).  Note, also, the dark fill above the find. 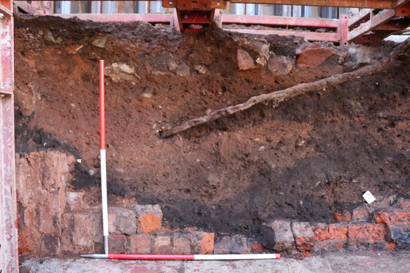 The label shows the spot where the coin was found.  You can also quite clearly see that it was found in a blackish sandy fill which had occasional pot sherds (some clearly Roman) and animal bone.  Because the dark fill is along the bottom of the more reddish layer, it seemed, at first, the reddish layer may have been created from the adjacent brick wall collapsing over time.

Here is the twist! 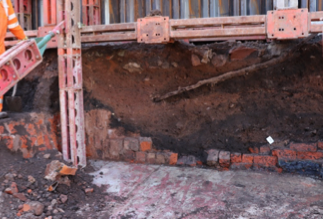 It turned out that this reddish fill was formed from the collapse of the upper Roman layers.  Some of them form a possible Roman road (see the picture, below).   The Roman road and associated ditch (to its left), represents at least two phases of the site’s history.  There are more ditches to the left of the one seen in the picture, and those seem to be associated with a later phase of the road.

The blackish deposit which sits on top of this later phase (characterised by an upper layer made of crushed slag), has Roman pottery in it. In the ditches to the left of the one visible below, there were also sherds of Roman pottery (Severn Valley Ware in fact). 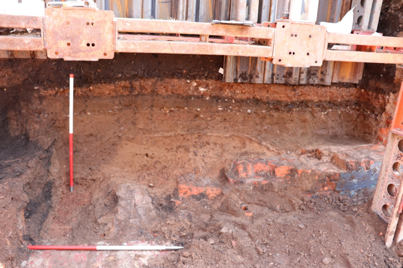 The coin is not where you might expect to find it!

When the coin was originally deposited it would be on top of the layer of sandy deposit.  You would expect to find it on top of the layer, as it sinks and gets covered even if it gets moved by later building work (i.e. it is re-deposited).

When, as in this case, the coin is found under such a layer (that layer was over groundwork for a potential road) then it is known as a residual find.

What we do as archaeologists is to work out why this tiny coin is on a layer that is under later work.  Was it a re-deposited (dropped when the road layer was put down and moved around during later work), or was it residual (dropped and worked its way into the fill where we found it)?

This, again, is something we will work out later once the experts have examined the coin.

One tiny coin, one big puzzle.   The archaeologist that found the coin has to record why the relatively rare find of a tiny coin was found above a more modern fill.

It is generally assumed that the natural territory of an archaeologist is within a muddy trench or investigating the roof spaces of historic buildings, torch in hand. Whilst this is often the case, we do occasionally pick up a notepad and venture into archive research. This was just the case for Willow Court Farm, historically...