Did you know Worcester has had 12 cinemas? Whilst working on an oral history interview which mentions visiting many of these, whilst working from home, Sarah checked on these, and brought them together in a walking trail which takes them all in. How many do you know of? 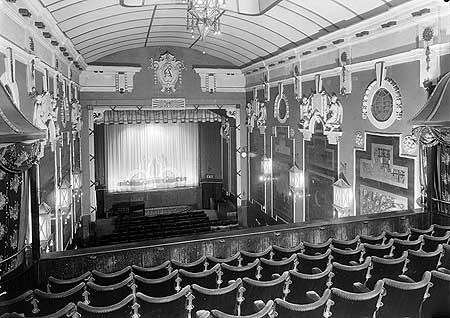 Inside The Silver Cinema

We were prompted to learn more about the cinemas around Worcester when one of our oral history interviews mentioned one (The Apollo) which was a bit of s surprise as it wasn’t well known and few people have heard of it. Claude Bernard Leake born in 1913 and recorded in 2008 at the age of 95 remembers “as my brother and I got older we could go to the local cinema in Worcester.” He also visited Worcester’s theatres and we have linked together other sites of Worcester’s movie-going past to a little walk around the city.

It is perfect during lockdown when we can’t visit the cinema, and can be enjoyed from your living room. In addition to photos from our archives, we have beautiful historic photographs kindly provided by Worcester’s City Heritage Environment Record (HER) and the Changing Face of Worcester project at Tudor House Museum.

The Northwick Cinema 1938-1966, is now Grade II listed and today is used as Gray’s Antiques Store with the beautiful décor still surviving inside. Claude says “the Northwick Cinema hadn’t been built at that time [during his childhood]”, so he has fewer memories of this than other cinemas. It had the same operator as the Scala in the centre of the city. Behind its simple Art Deco exterior by Architect C Edmund Wilford, the extravagant interior was designed by renowned theatre designer John Alexander. It features “over-life-size mythical figures, horses and chariots executed in fibrous plaster and flanking the proscenium arch” (in front of the screen) Little of his work still survives hence the Grade II listing, but his designs are archived by the Royal Institute of British Architects and the Victoria and Albert Museum. 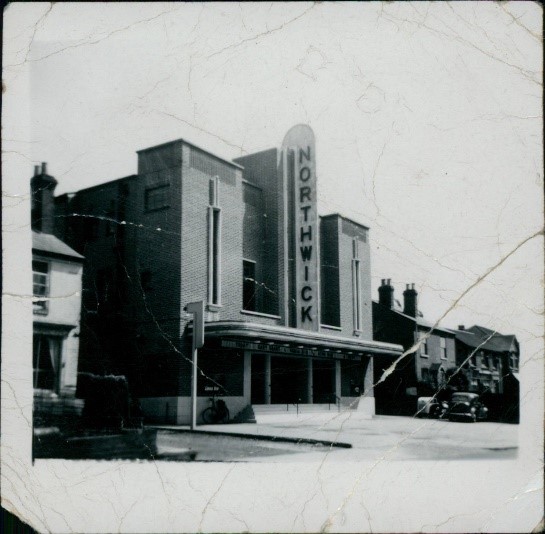 From here, walk South along Ombersley Road back towards the city. As the road becomes Foregate Street you will see the City Museum and Art Gallery on the left. Behind this building along Taylor Lane you will see:

The Victoria Institute, where our oral history interviewee Claude Leake trained in engineering, and remembers the magic lantern shows on a Saturday.  Magic lanterns were a precursor to motion films, and allowed still images to be projected from glass slides for the viewing public, perhaps during a talk or musical performance. Claude remembers: “sometimes we as a family would go to a Saturday evening lecture at the Victorian Institute in Worcester. And the lantern slides were very good, very often, and there were all kinds of slides shown on different subjects.” 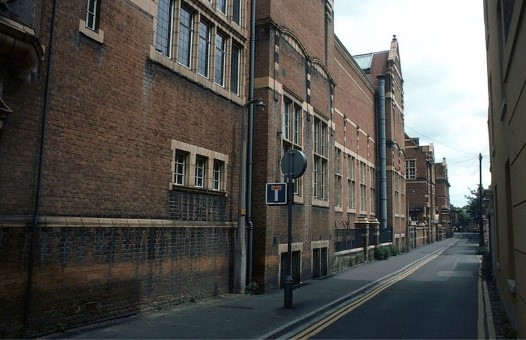 Further along Foregate street, also on the left you will come to the next cinema

Gaumont Cinema (1935-1974) opened with just 1 screen in 1935 with cutting edge technology as the same company bought and closed the Arcade cinema in the High Street. It was designed as a neo-Georgian building in brick, with 5 windows above its canopy lighting a 100 seater restaurant. Its art deco auditorium housed 1740 seats and a large stage was used especially in the 1960s and 70s for bands. Big names performed here including the Beatles, Rolling Stones, Jimi Hendrix, Buddy Holly and David Bowie.  It closed in 1974 as the Odeon opposite reopened with 3 screens (it is now a bingo hall) 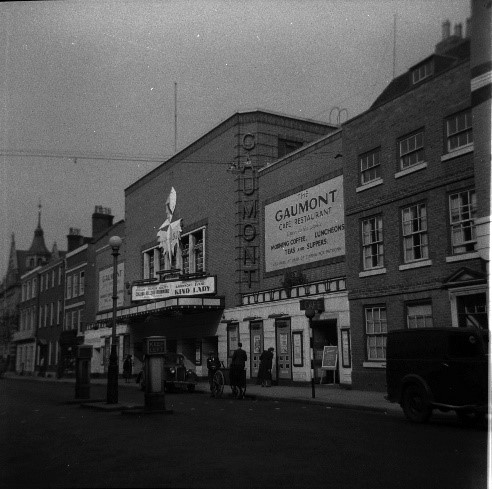 Continue towards the city along Foregate Street and on the opposite side of the of the road we have two cinemas for the price of one. The current Odeon Cinema was built on the site of the Silver Cinema. (Cross safely at the pedestrian crossing outside the Odeon or view across the road).

Silver Cinema (1914-1939) The building was originally the Empire Theatre (1835-1914) before it was renovated as the Silver Cinema. The frontage and auditorium had a neo-classical style and seated 741 people in just one screen. It was purchased by Oscar Deutsch of Odeon Theatres in 1933 and the building was demolished to be rebuilt as a new Odeon Cinema in 1939. 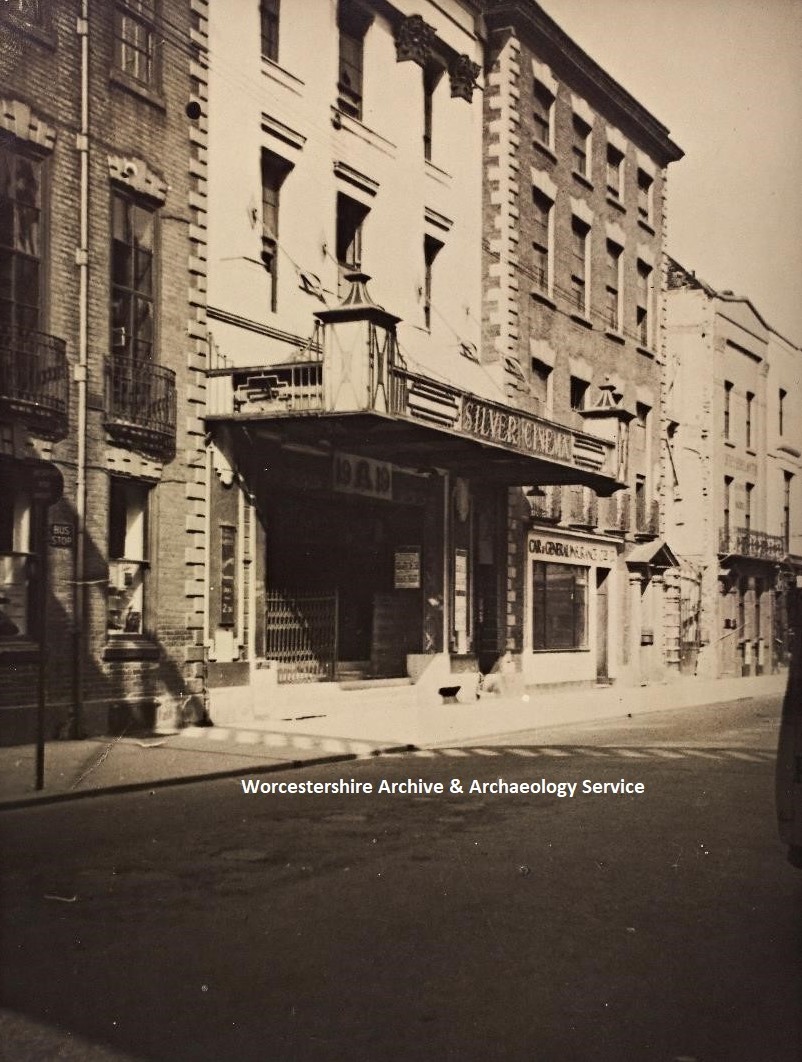 Odeon Cinema (1950-present day) Although the new Odeon building was erected just before the Second World War it was requisitioned by the government as storage so the cinema did not reopen until 1950 after they had installed the interior. It originally had one large screen seating 1688, then in 1974 3 screens were made from the main auditorium. In 1990 2 more screens were made in the original stalls and in 1997 2 more screens were created on the original balcony, and it now seats 1128 in 7 screens 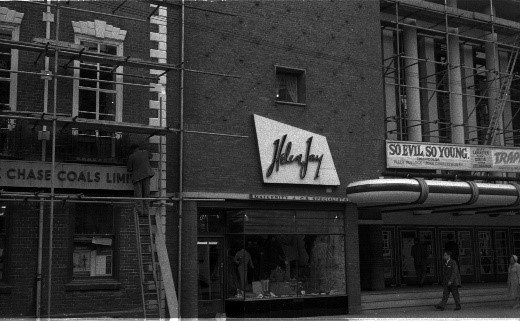 Arcade Cinema (1913-1935). Now having lost it’s elaborate frontage, this cinema once advertised itself as “Worcester’s luxurious picture house” according to the Worcester Chronicle, with a “talented orchestra trio”. It seated 900 in a single screen and was designed in a French renaissance style by Derby based architectural firm Naylor & Sale,  It was bought in the 1930s by Gaumont British Picture Company and closed by them as they opened the new Gaumont on Foregate Street. 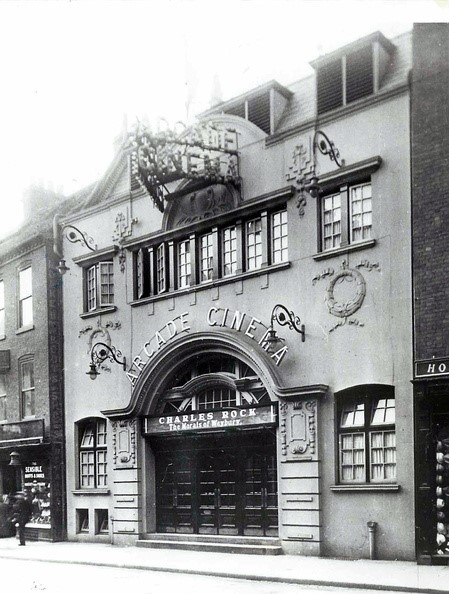 Continue straight along the High Street to Edward Elgar’s statue in Cathedral Plaza (a quick movie link here, much of Elgar’s music has been used in films from Brassed Off (1996), to The Amazing Spiderman (2014)). Follow Deansway to the left and at the corner of Friar Street you will find

The Vue Cinema (2000-present day), is a modern cinema built especially for this purpose with 6 screens and 1,315 seats. It was opened in 2000 by Actor Jenny Agutter for Warner Village but was taken over by Vue in 2004. It was the first to be built in a British city. Referred to by the company as ‘citiplex’, it was designed be ‘in keeping with the city’s historic street patterns and local architecture.’ According to Stuart Hanson 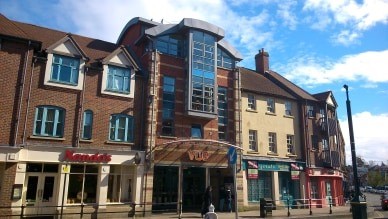 Continue into Sidbury (take a look at the back of the cinema along City Walls Road and see the lovely artistically sculpted railings at its rear) turn left into Wyldes Lane then left into Park Street, stopping outside the blue building now called Chapel Court

The Apollo Cinema (1911-1931), Park Street, Worcester was converted from the Zion Chapel in 1910 was also known as Evan Picture Palace, and Sears Apollo Picture Palace as it changed hands. It was so small the projection box had to be constructed out through a window over the street, and this was access from the outside via a ladder. It was not converted for sound so closed in 1931 when other cinemas began to show ‘talkies’. Claude remembers “the one cinema… in Sidbury in Worcester, and you could pay for your entrance in jam jars.” Entrance to matinees was 1d for children or two glass jam jars, and the grandson of Mr Evans who ran the Apollo remembers piles of jars in the back yard waiting for the rag and bone man. 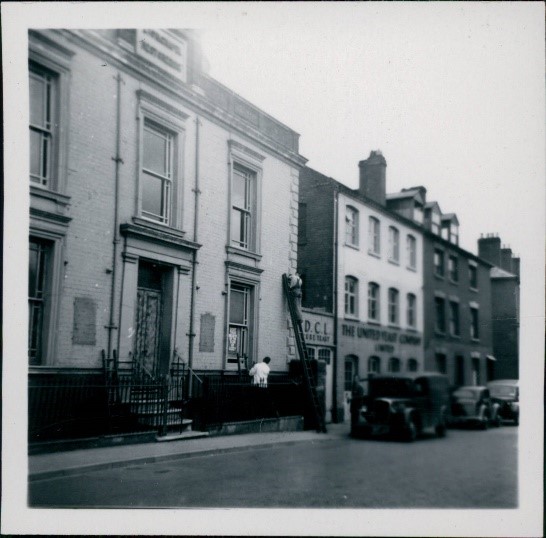 Continue along Park Street, which becomes Foundry Street, turn left along St Martin’s Gate, cross safely at the crossing and you come to the Cornmarket at the bottom of Mealcheapen Street (now a carpark) once home to

Worcester’s Public Hall (pre 1875-1966) where music and drama and dramatic readings were performed in two halls. Even Charles Dickens read exerts of his books here in 1867 while music fans could see the likes of Jenny Lind or local star Vesta Tilley. Entertainments also included wildlife lantern lectures and the bioscope, an early motion picture projector. The Evans family of the Apollo Cinema even showed films here. During the Second World War, Claude Leake remembered eating here at the British Restaurant, and a “particular performance” by “the famous speaker Bransby Williams… giving exerts from Charles Dickens’s Christmas Carol. And it always had a lasting impression on us, particularly Bob Cratchit and Scrooge and Tiny Tim.” 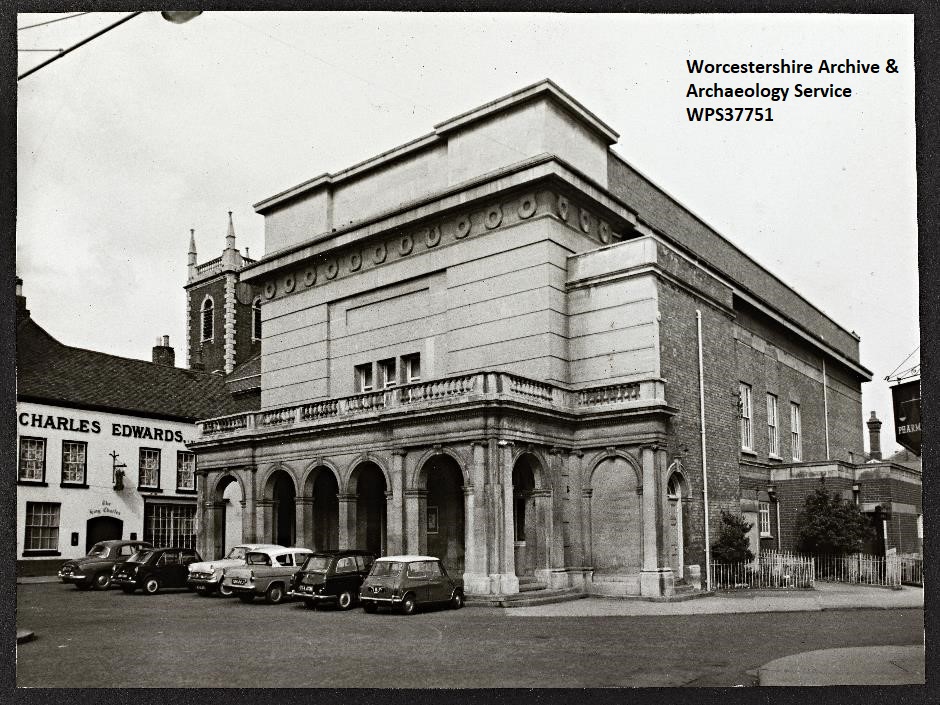 Walk up Mealcheapen Street turn right at the Cross, then left into Angel Street. Here on the right is the site of

Worcester’s Theatre Royal (1779-1805, 1805-1874, 1875-1877, 1878-1903, 1903-1910, 1910-55) which staged theatrical performances including pantomimes at Christmas and musical performances, and Claude Leake remembered seeing some pantomimes here as a young man: “we’d go and see the annual pantomime at Christmas time and I remember Aladdin was one and I think Ali Baba and the Forty Thieves was another”.  Built and rebuilt 4 times due to fires and demolition, in two of its incarnations it was designed by renowned theatre designer C J Phipps who designed over 40 theatres around the country, and many in London. During its 1910 refurbishment a projector was installed so that it could reopen as the Theatre Royal and Palace of Varieties showing early films. 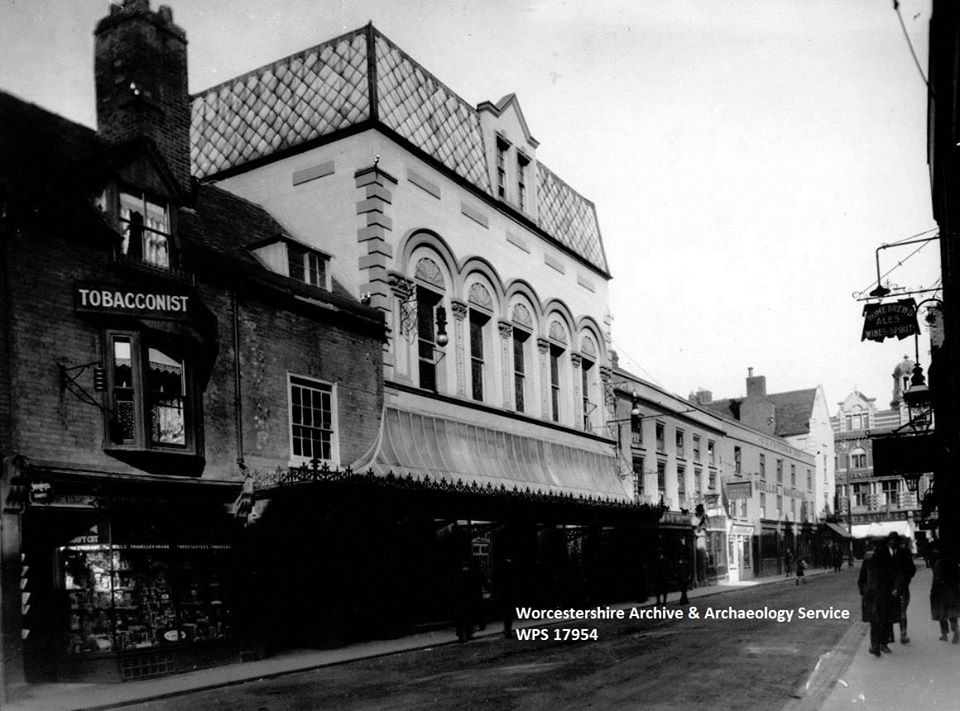 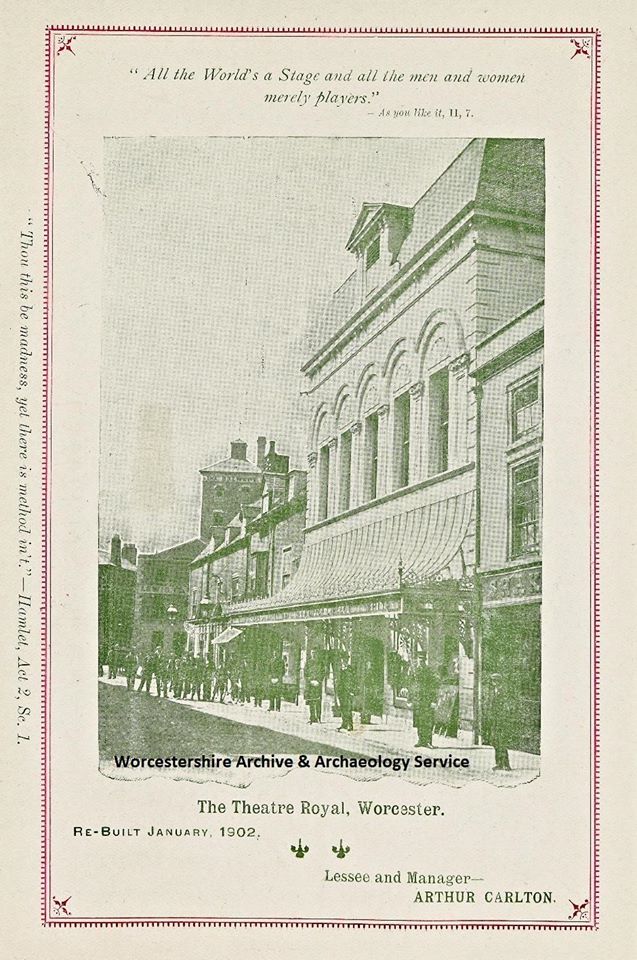 Continue a short way along Angel Street and on the opposite side of the road, on the corner of Angel Place and Angel Street, is

The Scala Cinema (1922-1973) previously a theatre, it opened as a cinema on 27th November 1922 and was the first cinema in Worcester to have CinemaScope installed in 1954. The CinemaScope screen was installed forward of the original proscenium (the part of a theatre stage in front of the curtain). The building is now used as an amusement arcade. Claude remembers: “we could go into town and go to the Scala Cinema or St Johns Cinema and see films” So let’s follow him over to St Johns for the final cinema on our tour. 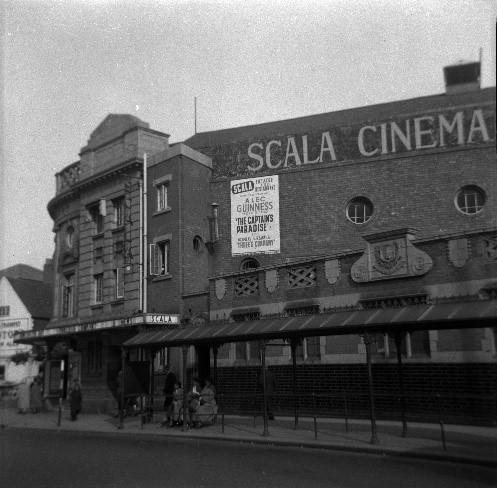 Turn left here to walk through Angel Place turn right at the end down Broad Street then continue over the bridge towards St Johns, past the Bull Ring, and turn left at the traffic lights along Malvern Road stopping at number 77 on the left

The St. John’s Cinema (1914-1959), one of Claude’s old haunts, was opened by the Goodsall Brothers (variously spelled) and changed hands many times. When opened it was hailed as a technological marvel and it is Worcester’s oldest surviving original cinema building. In 1929 the first ‘talkie’ for the city was played here, The Singing Fool, starring Al Jolson, and the crowds were so big they stretched down to the Bull Ring for the evening performances. In 1939 the cinema was taken over by the Odeon group whose newly build cinema on Foregate street had been requisitioned by the government for storage during the war but it closed as a cinema in 1959, and became a nightclub before a fire gutted the building. 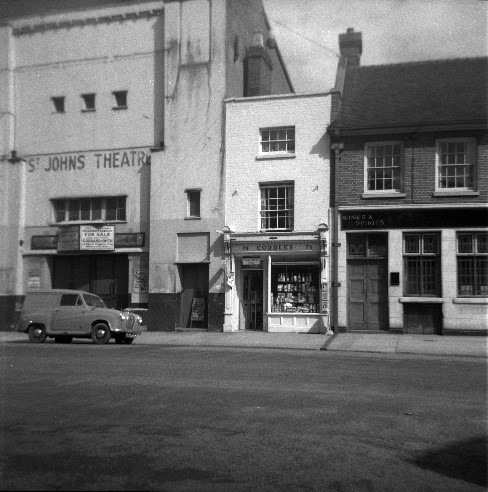 The walk around Worcester’s 9 cinemas (and a few extra film-related stops) is now complete, we hope you enjoyed it. Please let us know what you think of the walk, and perhaps even send us your photographs and memories of the cinemas of Worcester.

Thank you once again to Worcester City HER and Changing Face of Worcester through Tudor House Museum for the use of photographs, as well as copious websites and books for research including Worcester News, www.cinematreasures.org, www.worcesterpeopleandplaces.org.uk, www.heraldscotland.com , graysofworcester.co.uk, www.bbc.co.uk/herefordandworcester/, www.arthurlloyd.co.uk, historicengland.org.uk, Stuart Hanson’s Screening the World: Global Development of the Multiplex Cinema and James Dinn’s Worcester in 50 Buildings

There are also lots of lovely cinema-related items in our archives, including Claude’s interview, so keep an eye on our revised searchroom opening hours on www.explorethepast.co.uk to be able to look at these.