With the 2021 census due for completing on Sunday 21st March, we thought we would take a closer look at the census through the years.

What is the census?

The census was the brainchild of statistician John Rickman. He originally gave twelve reasons census information should be collected, including to find the number of men available to fight in the Napoleonic Wars, and to ensure sufficient food supplies for the growing population.

The first great survey of much of England and Wales was the Doomsday Book in 1086 completed for King William the Conqueror. But the ten-yearly census as we know it began in 1801. Between 1801 and 1831 the census recorded only statistical data and no personal information. In 1841 it was expanded to record the names, ages (rounded to 5 years) and occupation. At this point it becomes useful to researchers, but in each subsequent iteration the census have been more detailed and more accurate. 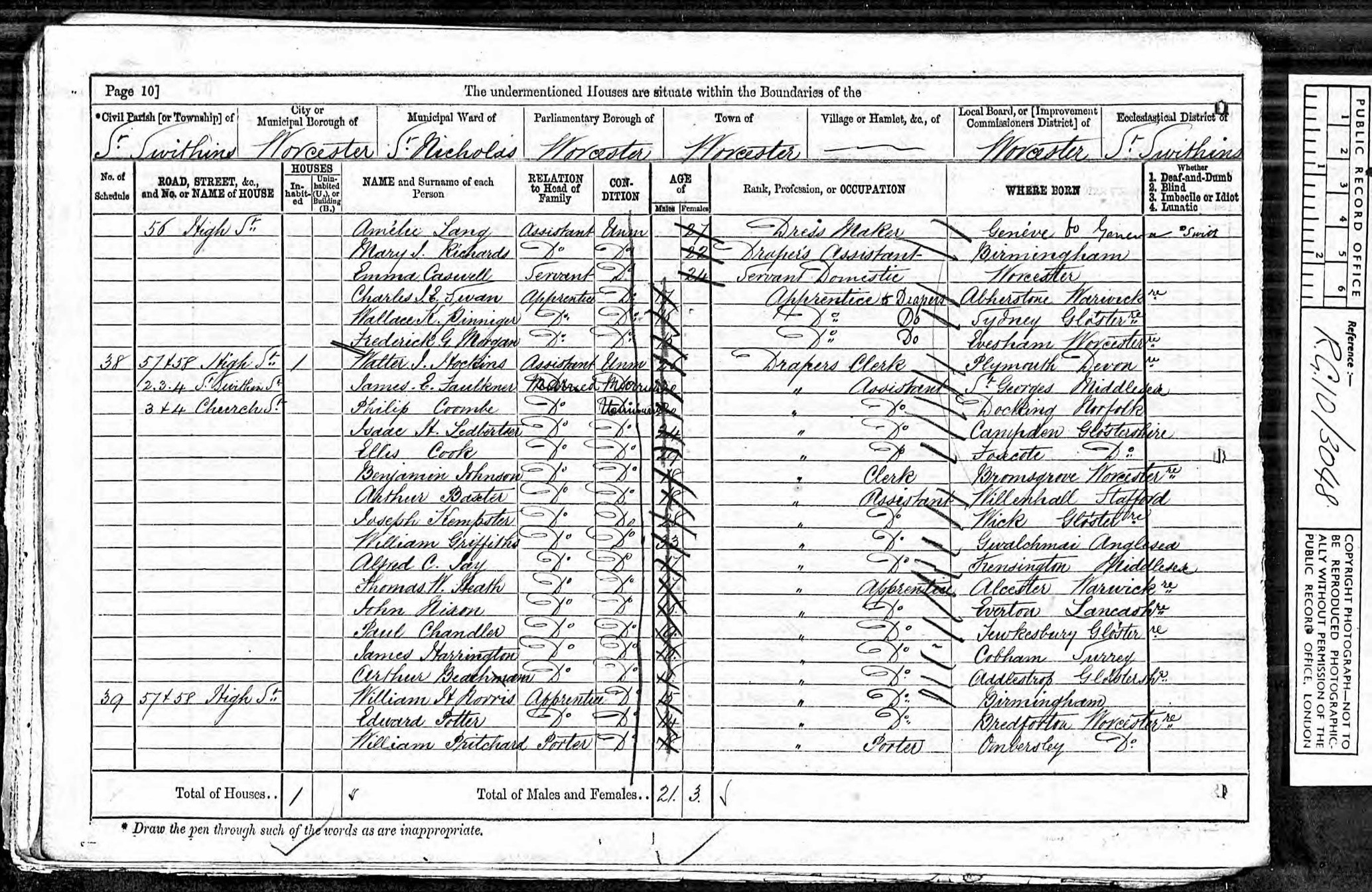 The 1851 census included place of birth, relationship to the head of the household, marital status, accurate ages and even details of whether an individual was blind deaf or dumb. Since then each subsequent census has added more detail and a greater level of accuracy. The latest census that historians can access at the moment is the 1911 census, the first where the version published was the sheet completed by each individual household, rather than the sheet put together by the enumerator.

The 1921 census will be the next to be released to the public, which will happen early 2022, following the essential 100 years delay to protect the individuals recorded on it. It will be the first to show the place of work which will be helpful to many historians. The 1931 census was accidentally destroyed in a fire, and the 1941 census did not take place because of the second world war, but a survey was completed in 1939 before the war and this is already available to researchers, although the youngest participants remain anonymised. 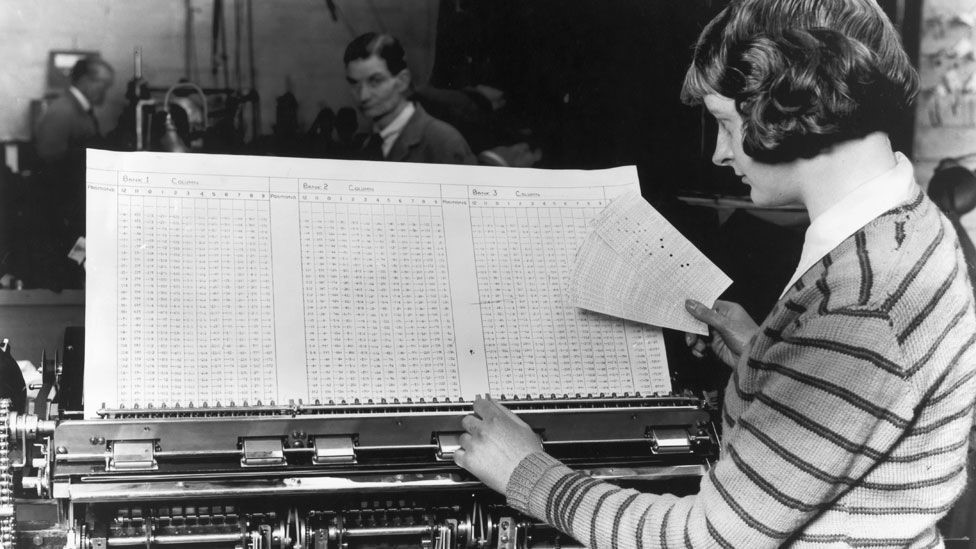 Skipping ahead, many may remember the 2001 census which asked people about religion for the first time for a while, and 390,000 people entered their religion as Jedi Knight making it the 4th largest religion in the country. This had also been the first time the public were asked to post back their census form themselves. The 2011 census included options for civil partnership and this year’s census has additional voluntary questions about sexual orientation.

Is the census mandatory?

Under the Census Act 1920, refusal to complete the census or even forgetfulness can result in a maximum fine of £1,000. But through the years some people have famously recorded inaccuracies or purposely disappeared. Suffragette campaigner Emily Wilding Davison hid in a cupboard in Parliament on census night 1911, so her address could be recorded as the House of Commons and in 1841, artist JMW Turner rowed a boat into the Thames so he could not be counted at any address. In 2011 270 people were found guilty for failing to complete their 2011 census forms. According to The Guardian a number saw themselves as ‘conscientious objectors’ refusing to fill out the forms because of the involvement of the defence contractor Lockheed Martin UK, which ran the census. The previous census had seen only 38 people prosecuted.

What is the census for?

Census statistics are used by local authorities and government to help with planning decisions on housing, education, and health. The information may even be used by companies to calculate customer populations, and locations. Censuses can show the development of the population in terms of age groups, gender, race and ethnicity. Over a hundred years after their completion, census details are available to the public for research, and anyone who has used such records for historic research will know these documents have become essential for learning more about the people who lived before us.

Census details can be used in many ways by researchers.  Family research uses censuses to learn about individuals and family units, providing more detail than is possible from baptisms marriages and burials on parish registers. It also helps to find people who might have moved around the country or stayed in one place and developed their career through the years, although historically the census has not always recorded women’s roles accurately. It can be used by researchers to look at institutions such as hospitals where all staff and patients are recorded in a snapshot, or to do surveys of an area or find particular occupations. 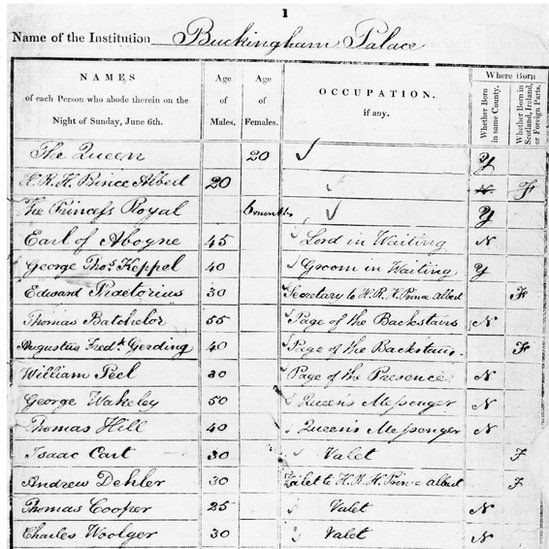 1841 Census for Buckingham palace, with Her Majesty Queen Victoria at the top. Copyright The National Archives

Some of the archive and archaeology team have used census details for different projects, so we thought we would share some of the exciting research we have done using details from the census’. If you feel inspired, historic censuses are currently available on line from home, so you can do your own research.

Teresa did a project as part of her degree on the Countess of Huntingdon Church in Worcester. Starting with the 1851 ecclesiastical census for the size of the congregation she added details from other sources. She used the census to gather occupation data of the families to find out about the industries the congregation were working in and geographical information about where they lived. She showed the congregation became more local over the period and the families having their children baptised there became more likely to be in designated working class occupations.

Ian did a project on Offa’s and Wat’s Dykes looking at border archaeology between England and Wales. The census helped him to establish the names and family histories either side of what is not a solid border. It helped to show English family names living in Welsh villages and vice-versa. Currently discussions about this this area consider that the border was deliberately left transitional to allow the hot-head Saxons through the area to raid the Welsh kingdoms from around 750-810.

Sarah recently did a project for the George Marshall Medical Museum and Worcestershire World War One Hundred project.  She looked at patients at Powick Asylum during the First World War. As part of this she found the patient names in the asylum casebooks then traced them on the census returns to learn more about their lives before and after their admissions. It helped her learn about where they lived, their occupations, and their families and showed that some lived long lives after being discharged from Powick.

Anthony has found the Census incredibly useful in his own family history research, locating his great, great grandmother on the 1911 Census.  He also recently also used the 1851 and 1861 censuses to piece together information about the Botanist ‘Benjamin Maund’ of Bromsgrove who owned a printing and stationery business in the town. The Census helped not only confirm the names of his wife and daughters and their ages but also helped follow him to Folkestone when he left Worcester, before he eventually moved to the Isle of Wight.

Carol used the censuses for a Masters dissertation on the hidden story of working women in Badsey, Bishampton and Elmley Castle in the nineteenth century. She challenged the Victorian myth of the ‘angel of the home’ and discovered the role women played in the household economy. She used the census to chart the growth of the population in each village. She compared the women over time and between villages, looking at their occupations and how these changed over time. However she questioned the accuracy of evidence completed by male enumerators who didn’t accurately record what women did, where local trade directories and baptism entries might reveal more accurately how the women saw themselves.

The statistics from this month’s census should be available soon after the forms have been completed and in over a hundred years the details will be available for use by historians. In the more immediate future, we are looking forward to the 1921 census details being released. The 1921 census will help to solve couple of mysteries family histories, but help make some interesting pre- and post-war comparisons in projects. It will be used to help investigate the geographical movements of populations, and to re-established the same movements and connections as in previous censuses. It will help add more detail to previously research and to fill in some gaps and learn more about the people already considered.

For more information on some of these research projects:

Anthony’s research will eventually appear on the blog https://www.explorethepast.co.uk/blog/