Redditch Military Tribunal Project Volunteer Perspective: The Ups and Downs of a Researcher

Today we hear from one of the Redditch Military Service Tribunals Project Volunteers, Derek Coombes, who provides us with his perspective of records and the history of the Redditch Tribunals revealed through the research he undertook as part of our National Lottery Heritage funded project. 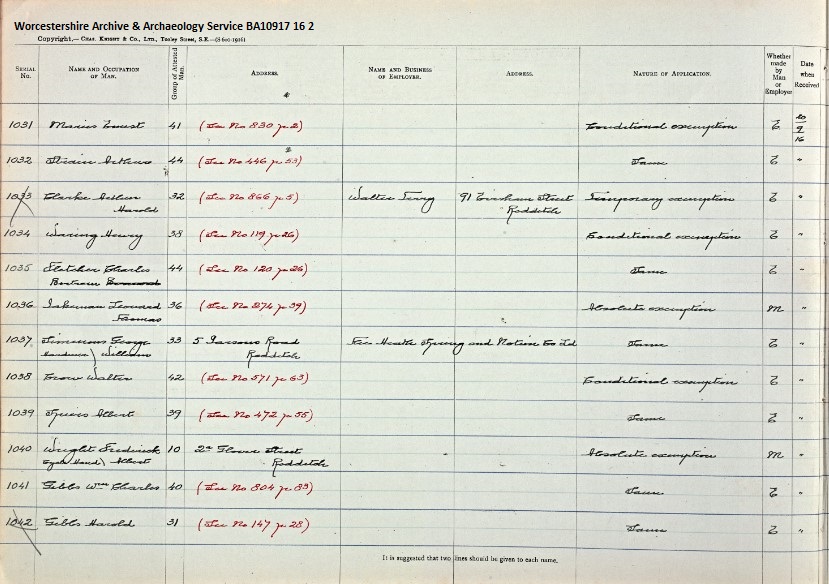 One aspect of the town’s history which, together with my wife Jill, we explored was the impact of WW1 on the town, particularly the lives and stories of the casualties among its residents.  When we were approached by the Hive to support a project about military tribunals, particularly as the Redditch records of these tribunals were one of the few not destroyed after the war, it was an opportunity not to be missed. We volunteered to be involved and recruited two other volunteers from society members.

Un-be-known to us the wheels of projects do not always run smooth and there were some frustrating delays before the project could start.  But start it did and we were soon being inducted into the workings of the Worcestershire Archives and had a volume of the Tribunal Records each to transcribe. The next challenge was then deciphering the handwriting of the council clerk who was allocated the task of entering the details of every applicant appearing before the tribunals board. One that springs to mind was E. C. Archer who we could find no record of. After much searching, we discovered his surname was actually Anker. Similarly, you would be surprised how many ways you can spell the name Bayliss.

Once into this it soon dispelled the pre-conceived myth that applicants were mainly conscientious objectors. Many cases highlighted the hardship of the times such as where calling up a breadwinner from a family could leave that family below the bread line. Another strong thread was that many local employers were very keen to keep key staff at home and often applied on behalf of their workers for exemption from call up.

Another surprising fact to emerge was that applicants rarely got a yes/no decision on their first appearance at a tribunal.  Often, they were called back many times and decisions only made as the circumstances of the war changed and the need for reinforcements on the front line increased.

As we worked through the tribunals, we got to know individuals, the family circumstances and, sadly in some cases, their plight. As we had records from the history society’s Redditch war casualties project, we could cross-reference individuals from tribunal appearances to the horrors of the front line. In some cases, those whose appeal to stay was rejected did pay the ultimate price. 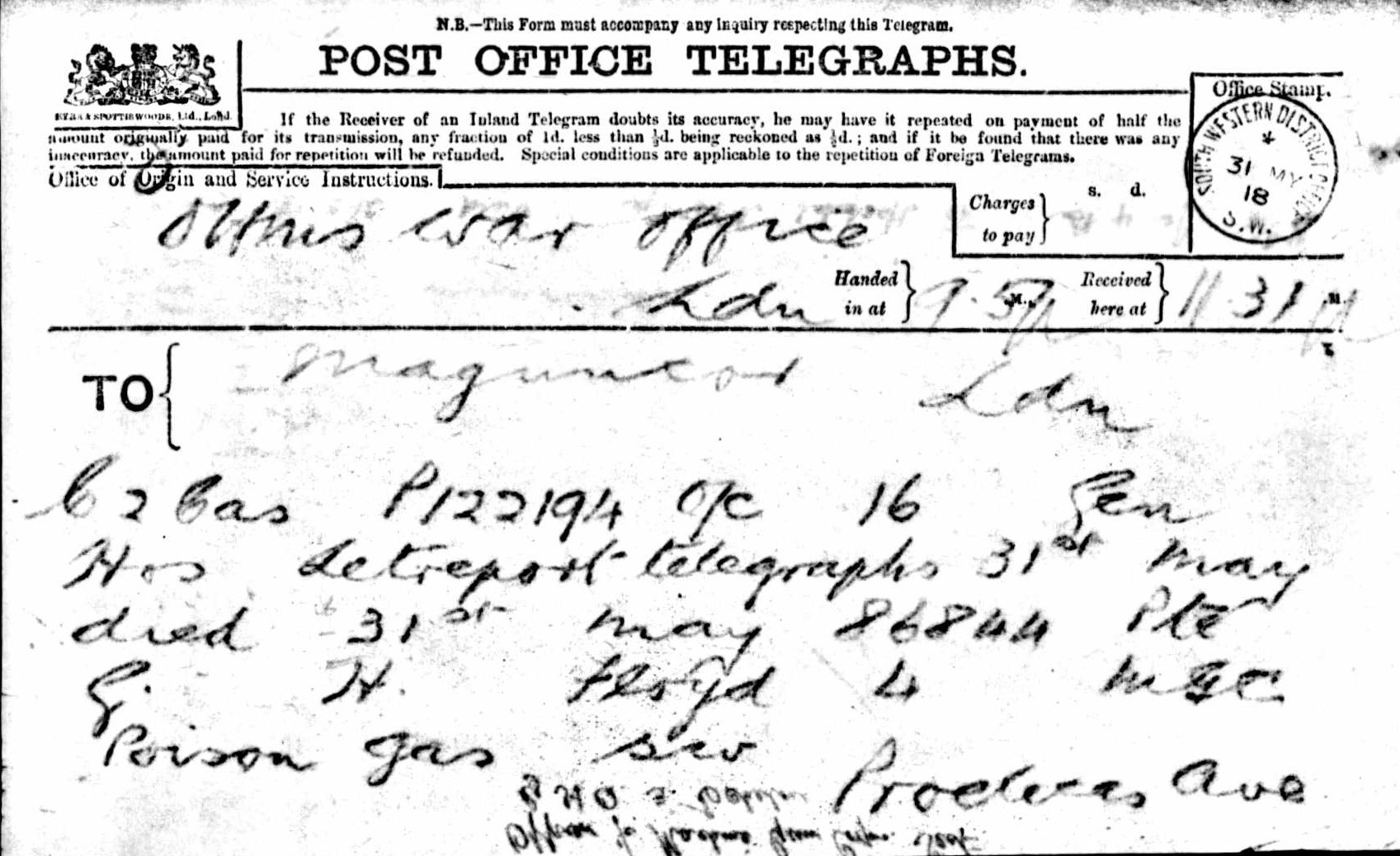 The National Archives, ref. WO363 Telegram on the death of G.H. Floyd. After being refused exemption from conscription, the telegram you did not want to get.

Once into the transcription of the records and follow-up research using genealogical and war services records many stories came to life. Finding a family on Ancestry bought applicants to life, but as census records for 1911 were one of the key sources of information and finding an applicant recorded as a 13 year old student in 1911 now being sent off to war in 1916 certainly made you stop and think.

Probably the hardest element of researching these men’s stories was the availability of military service records.  Lack of cross-referencing information often made it difficult to pinpoint your man from others of the same name called up at the time. Probably the biggest surprise was the lack of military records available, many having been destroyed by air raids and subsequent fires in world war two. 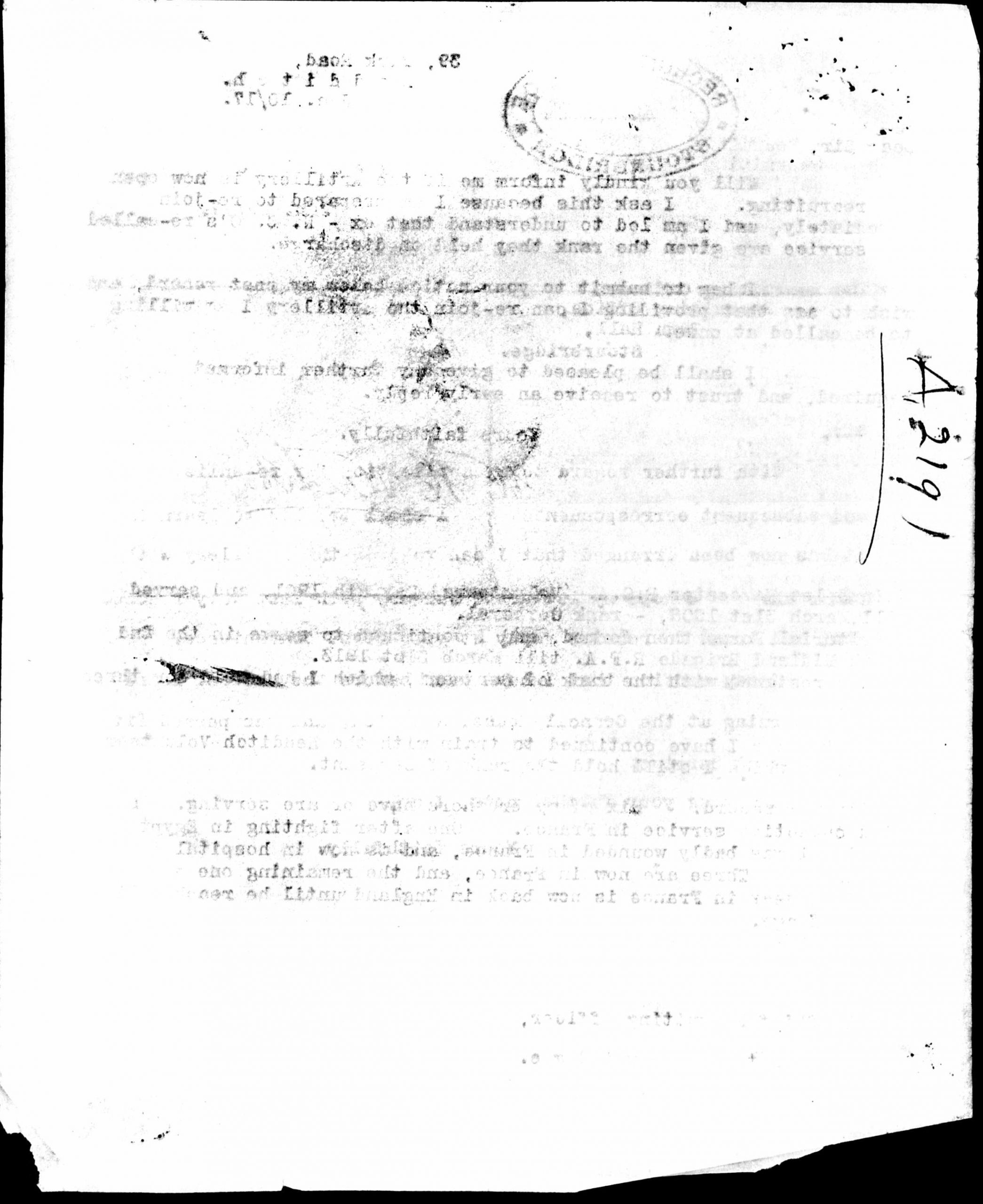 The National Archives, ref. WO363. The euphoria of find a military record could sometimes be short lived.

As well as the researching issues, everyday life also impacted on the project. On several occasions visits to the Hive had to be cancelled as flood waters closed the adjacent car parks. Then of course the world changed with Covid-19 and access to the Hive and the tribunal records was halted. Luckily, we had photographed the pages of the tribunal journals and with the Hive arranging access to on-line genealogy resources work continued and was completed at home.

But we got there in the end. We leaned new skills, we made friends with fellow researchers and we got to know more about the work of the county archives team. Most importantly we got a rare insight to one aspect of the events from 1914 to 1918 that changed both Redditch and the world.

We are incredibly grateful for the hard work all our volunteers undertook for this project. Their research will help bring the men who applied to the Redditch Tribunals to life and the resources which we created came out of their hard work can hopefully help us tell the stories of these men and help you to share in our research.