Henry Morley travelled as a second-class passenger on the Titanic and sadly died in the sinking. He was listed as a passenger from Birmingham, but had shops in many places including Worcester, where one of his shop assistants was Kate Phillips. They eloped together on the Titanic in the hope of starting a new life together in America. Kate survived and returned to Worcester to give birth to a daughter who she named Ellen.

Morley had been born in Marylebone Middlesex England. His Baptism shows he was born 2nd May 1874 and baptised 15th January 1878 at St Peters, Maidstone, Kent along with his brother Arthur.

In 1871 Henry’s father William of Bishops Stortford Hertfordshire married Emily Mace from North Walsham, Norfolk, in Marylebone, London, at the age of 21. The 1881 census shows William Morley living in Plumstead London in Robert Street South, listed as a tailor’s cutter (previously a drapers assistant in). The couple had several children including Arthur William (first an assistant then manager of a boot shop in Bristol), Henry Samuel, Ernest, Louis J, Reginald, Laura, and Jane.

When his father died in January 1889 leaving his goods to his widow Emily at 21 east street, Charlton, Kent. His mother was listed on the next census as a “tailoress” and Henry as a grocer’s clerk, still with five children at home. Henry is listed here as a frock cutter probably helping in the family business.

By 1899 Morley had moved to Worcester, where he married Louisa Price who had been born here. Henry and Louisa moved to Vernon Park off Malvern Road in St John’s Bedwardine, Worcester. Here he was listed as a grocers manager on the census. They had only one child named Doris Louisa.

A 1910 directory shows that by now Henry Morley has a confectionery shop at 336 high street Cheltenham and rate books for Birmingham from 1911 show L Morley Brothers under Henry Samuel Morley had a shop at 73 New Street Birmingham. The “Purveyors of High Class Confectionery” also had stores at High Street, and Bristol Street in Birmingham. The 1910 directory for Worcester show the same company owned 3 stores in Worcester: 22 Foregate Street where Henry lived with his family, and shops at 36 the Shambles and 3 Broad Street. The company also had a branch at Belle Vue Terrace in Malvern.

The 1911 census shows the Morley family living at 22 Foregate Street Worcester. Henry’s mother Emily from North Walsham in Norfolk is listed as a cook at a boarding house. Henry’s aunt Alice Mace, nephew Vincent born in Bristol, and his wife Louisa are listed as “assisting in the business” and his daughter Doris is there as a scholar. 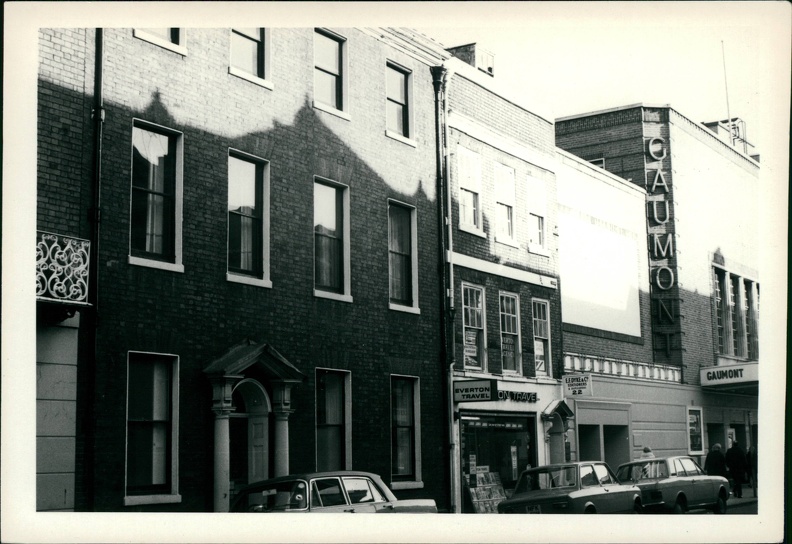 Preparing for the journey

In Worcester, one of Henry’s employees was Kate Florence Phillips. Kate aged just 19 had been a counter assistant at 40-year-old Henry’s confectionery shop in Foregate Street. They had begun a clandestine affair that led them to the titanic under the pseudonym of Mr and Mrs Marshall, on a joint ticket.

Born in Kings Norton, Worcestershire on 1 January 1893, Kate was one of 5 children to Thomas Charles Phillips, an engine fitter, and Mary Smith. By 1901 she lived with her family at Martley Road, North Hallow, Worcestershire. By 1911 Kate’s family had moved to 34 Waterworks Road, Worcester, where she was listed as a “confectionery shop assistant”, employed by Henry Morley.

When Morley bought tickets for the titanic he was leaving behind his wife and a 12 year old daughter. He had told  family and friends that he was going to California, for a few months, for ‘health reasons’. In reality, Mr. Henry Samuel Morley was sailing to America with Kate his shop assistant.

Before the sailing, Morley’s brother noted that he drained his businesses, to have capital to start a confectionery business in California. Henry had been quite a wealthy sweep shop owner, eventually leaving an estate worth £1136 which was administered in September in London by his brother Arthur William.

Henry sold two of his shops to raise money for this elopement. He drew out £400 in notes, from his account at The United Counties Bank Limited of Worcester on 2nd March 1912, and probably spent £60 at the most, before he sailed, staying at various addresses with Kate Phillips, who passed as his wife.

But great granddaughter Beverley says ‘‘Henry’s brother knew about the elopement, he took them to Southampton and waved them off. He was the only one that knew.’’ 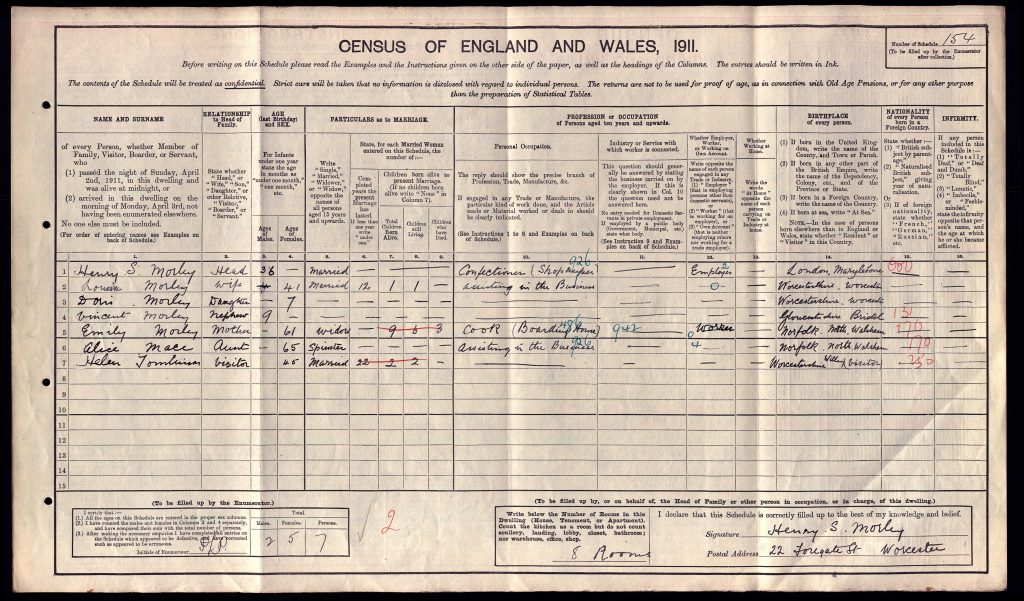 Henry and Kate’s second-class ticket number 250655 cost £26. The couple travelled together as Mr and Mrs Marshall on board the Titanic. The second-class accommodation on Titanic was mostly cabins with two or four bunk-beds, for a total of 550 passengers. Each had a sink and a mirror and the bed linen was changed every day, and passengers shared bathrooms. Second class travellers had an outdoor promenade, a smoking room, a library and dining room. Afternoon tea and coffee was served in the library.

Beverley Roberts, Kate’s great granddaughter now owns a small leather purse that belonged to Kate Phillips. It once contained a very special necklace made in Birmingham. It was a diamond-encrusted sapphire necklace, which Henry had specially made in Birmingham’s jewellery quarter and known as ‘L’Amour de la Mer’ – The Love of the Ocean. (similar to the one that appeared in James Cameron’s Titanic). He presented it to her during the journey.

Kate survived the disaster and returned to her Worcester family, while Henry Morley, who could not swim, is believed to have drowned, though was never found.

Kate got into Lifeboat No.11, possibly the last lifeboat to leave the stricken vessel. As the couple left their cabin for the lifeboat area, Henry had quickly put the necklace around Kate’s neck. Daughter Ellen told the White Star Journal, ‘‘My father didn’t want her to go and tried to cling on to her, but the sailors threw her in the boat.” Miss Phillips was put into a lifeboat along with other women and children, from the first-class deck where the lifeboats were stored. She was in the lifeboat for about eight hours, during which time one of the sailors wrapped his jumper round her.

Kate was picked up by the Carpathia and was taken in by the Red Cross in New York. She lived there for three or four months with a couple who had taken her in. By that time, she had discovered she was pregnant, but the couple did not want to take on a baby, so Kate returned to Worcester, England. In the home of her parents at 34 Waterworks Road in Worcester her baby Ellen was born just nine months after the sinking of the Titanic on January 11, 1913. But despite returning to the area, Kate was in disgrace for eloping with her employer.

Kate’s friends and family apparently always said she was never the same after she came back to Worcester and she did not talk about Morley. Kate’s daughter Ellen believed ‘‘The shock of the Titanic must have disturbed my mother’s mind. [she] became more and more disturbed – once she swallowed some acid and it burned the walls of her stomach. She was eventually put in an asylum and my stepfather left her.”

Kate later moved to London as a shoe and hat saleswoman and married in Middlesex in 1918 to Frederick H Watson a café proprietor. They had a daughter John M Watson in 1919 in Harrow and around 1922 Kate assumed guardianship of Ellen. She became bedridden in later years, and her husband abandoned her before she died in 1964.

Ellen was said by some to be the youngest Titanic survivor being conceived before it sank. Kate claimed Ellen was the daughter of Henry Morley but she was never legally recognised as such. Ellen was raised by her grandparents until she was 10 before moving to live with her mother and her new husband in Middlesex. She later worked as a florist and for the London Passport office, becoming a railway porter during the Second World War. She married a bus driver in 1935 and had a son called Robert. Ellen split from her husband and later married Frederick Walker, living in London with him before returning to Worcestershire in the 1980s. Ellen later lived in Pershore from the 1980s until her death in 2005 at the age of 92.

Among Ellen’s most prized possessions was a poignant reminder of the Titanic, her mother’s purse which she carried on the ship, still with her cabin keys inside and until the 1990s, the beautiful sapphire necklace her father gave to her mother on board the ship. Ellen sold the necklace and the other Titanic items to a Southampton dealer in the early 1990s, her granddaughter thinks she was paid just £450 for it.

In 1989 76-year-old Ellen Mary Walker nee Phillips went to the Worcester News office at Hylton Road to meet Mike Grundy where for the first time in her life she saw a photograph of her father used in his Memory Lane weekly feature in the paper. “When I handed her a photo of her father she cried,” he said.

Ellen’s ashes were scattered at sea and she left a great deal of her estate to the RNLI who she believed saved her life.

Parish registers for Worcestershire and Worcester news (we used an article from 15th April 2012) are on microfilm at the Hive.

Hodges, John Richard, Titanic: The Story of a Maritime Tragedy (1998)