Researching Beyond the Census for Father’s Day

Richard Ganderton was the great-great-grandfather of one of our archive assistants. She was busy researching him when she came across some interesting tidbits in the archives.

The census, wills, and local parish registers (on microfilm at the Hive and on Ancestry.co.uk), are the usual places to look at family history. A little research had already revealed Richard’s occupation, address and family members, and a little more digging revealed more about him.

The local directories (on the shelf at the Hive and some available through Ancestry.co.uk) and his mother’s will, show Richard’s occupation was originally carpenter, then by about 1851 he called himself a builder.

The Census  shows that Richard was born in 1810 in Tewkesbury and had moved to Worcester by 1841. He lived at Spring Gardens off the Tything in Worcester, which is now demolished (maps in local directories and a book by Terry Wardle show it was near Moor Street and Back Lane South).

The Census shows Richard’s wife Ann Grainger came from Fladbury.  Records from Angel Street Congregational Chapel (Now Tramps night club) show Richard married his wife there in 1835 and his children were baptised there between 1836 and 1848 (on microfilm at the Hive).  Other records for the church, also in the archives, include a cashbook [898.5 BA2459/6]. This shows that between 1841 and 1851 Richard was paid as a carpenter to work at the church on small projects along with other workmen such as masons and builders, who may also have been members of the congregation.  In 1841 the church was “Enfranchised” and Richard was one of the congregation who subscribed a sum to help purchase the property. In 1858 the building was rebuilt by Messrs Woods and Sons who later also built the Sunday School next door (now the Angel Centre) and there were no more mentions of Richard in the accounts.

On the Hive public access computers it is possible to search online databases of newspaper reports and these revealed a great deal about Richard Ganderton. As a carpenter and builder the census shows he employed up to 50 men and the newspaper revealed he also took on apprentices. He was contracted on several building projects around the area. He erected a circus at the Saracen’s Head on the Tything, and built a parsonage in Herefordshire. He was then involved with buildings, including a church in Far Forest and the Worcester Dispensary,  for which we had more information in the archives. 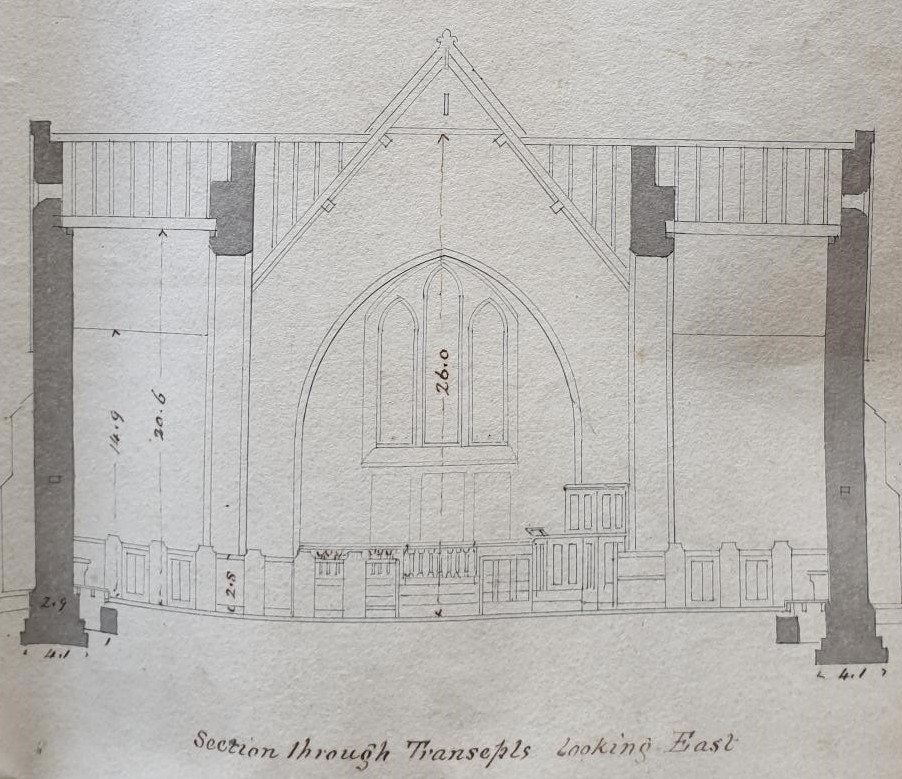 Plan of far Forest Chapel and signature of Richard at bottom

The building plans for Holy Trinity church at Far Forest from 1843 are held at Worcestershire Archive and Archaeology Service in the original archive area [ref 705:79 BA7796/8]. They are signed by Architect AE Perkins, and the 3 builders working on the project, including Richard Ganderton. Perkins was also the architect to the cathedral for 15 years during a restoration programme and worked with Richard on several occasions including a parsonage at Edwyn Ralph in Herefordshire and the rebuilding of Worcester Dispensary. 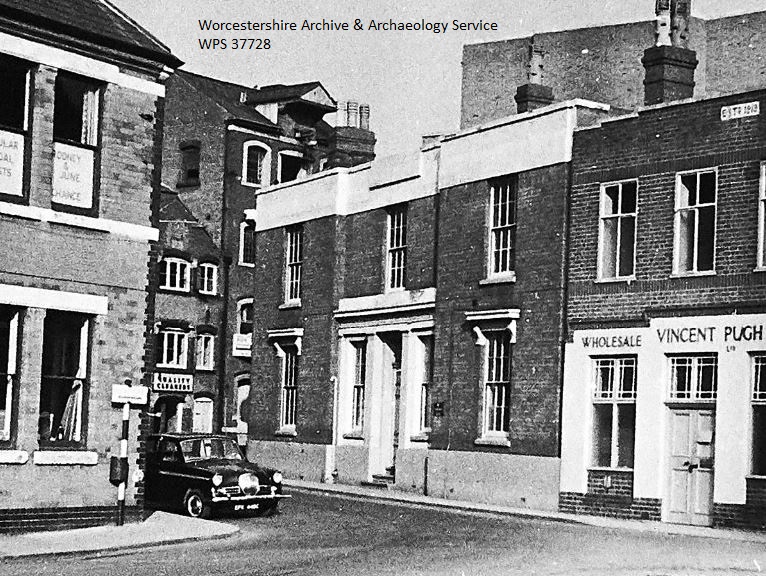 The voluntary dispensary in Worcester had originally been formed in 1822, in a building in Bank Street (running now from High Street to the Crowngate alongside the Post Office). It was funded by subscribers, and treated the ‘deserving poor’, the working classes, who were not sufficiently sick or injured to use the Worcester Infirmary. It operated a little like a GP today, where outpatients were treated for minor ailments. Patients had to have a “letter of recommendation” from a subscriber to use the dispensary. In 1850 the committee decided to purchase the building and rebuild it to their specifications. Richard Ganderton was the builder employed on this project, probably in charge of a large group of employees. The road that included the dispensary was mostly demolished in the 1980s to build Crowngate Shopping Centre.  The minutes and reports of the Worcester Dispensary no longer exist but there are fragments of its history in the archives, as well as snippets of annual reports in the Berrows Worcester News (available on microfilm) and a couple of photographs of Bank Street showing the dispensary building [WPS Worcester, Bank Street: 37720 and 37728].

Other documents relating to the dispensary which are available in the archives include:

In 1861 Richard moved away from the city to Great Witley, where he lived at Grove farmwith his wife and some of his younger children. He later moved to Ribbesford near Bewdley. He passed away and was buried in 1881 in Ribbesford (according to the parish register in the original archives also held on microfilm at the Hive).

*This research was carried out during Covid-19 restrictions while microfilms were unavailable to the public. Under normal circumstances customers are encouraged to use microfilmed records first where possible to protect the original documents.

One response to “Researching Beyond the Census for Father’s Day”

The Three Choirs Festival is the longest running non-competitive classical music festival in the world. Rotating between the English cathedral cities of Worcester, Hereford, and Gloucester, the festival hosts an annual, week-long, summer programme of concerts and services, with an accompanying fringe programme. We’ve had a look in our collections to share some of the...

As part of the Worcester Charter 400 celebrations, we are supporting, there are special essay competitions. Inspired by the 1621 Charter, held in the archives, there are categories for children and adults.

We are pleased to announce electoral register indexes covering 1837-1974 are live on Ancestry at Worcestershire Electoral Registers, 1837-1974 | Ancestry®  They have been created using text recognition software, rather than being transcribed. These registers can help place your ancestors in a particular location and possibly also reveal some details about property they owned. Ancestry...