There is a popular image of 19thcentury blacksmithing as an all-male occupation; few would picture young women, juggling their families and businesses to survive as a smith.

We know women had all the strength and skill needed to be metal workers, locally many were nail makers and chain makers, but apprenticeship records show girls were not going into the profession of blacksmith. So, it was surprising to find in the 1851 Lascelles & Co. Trade Directory of Worcester, that of the 14 blacksmiths listed that year, two were women: Mary Gwilliam and Maria Lawrence. How did these women come to run blacksmith shops in two of the busiest locations in Worcester?

Mary was born Mary James in Herefordshire and married blacksmith Stephen Gwilliam at St Albans in Worcester in 1832. Her husband acquired a blacksmith’s shop just off the Tything in Worcester, on Back Walk, where they had 4 sons. Sadly, they lost one in infancy and tragedy again struck in 1841 when Stephen died, leaving Mary with 3 small boys and a blacksmith’s shop to run. The 1841 census shows her occupation as blacksmith, living with her 3 sons, Thomas, aged 7, John, 4 and Stephen, 2 and her niece Emma, aged 14. Tragically, a few years later, her middle son John also died. The 1851 census shows her living with Thomas and Stephen, her nephew James and Emma her niece. Interestingly, on the census her profession as ‘Blacksmith’ has been crossed out and instead ‘Householder’ entered; when they reviewed the census, did someone not believe that this middle-aged woman could possibly be one?

By 1851 Thomas was already working as a blacksmith and he went on to continue the family trade. He also continued to experience the tragedies that blighted their family and the lives of many at that time; in 1861, aged 27, the census shows he was already widowed and had moved with his 3 small children, mother Mary, and brother Stephen, to a blacksmith’s shop next to the gaol in Worcester. Mary died in 1869.

Tithe plan showing the location of Mary Gwilliam’s blacksmith shop (c1843) at what is now the junction of Hebb Street and Brewery Walk in Worcester.

Born Mary Hughes, she married widowed blacksmith Samuel Lawrence in 1844, taking on his business and his family. They were shoeing smiths on the Lower Butts in Worcester. There were many shoeing smiths in the area around the Butts; the word ‘Farrier’ is linked to that area for this reason. In 1850, Samuel died, and the 1851 census shows Maria as head of the household, a shoeing smith, employing one man and one boy. The household consisted of her two stepdaughters, her mother in law, her husband’s nephew (the ‘one boy’ employed), another smith and a lodger.

In nearby Infirmary Walk, shopkeeper Edward Sandford’s wife had also died in 1850 and in 1853, Maria and Edward married.

A notice in the Worcester Chronicle in 1856 announced the dissolution of a partnership between the now Maria Sandford and John Finch Worthington as shoeing smiths.

In the notice, Maria, ‘returns thanks for the favours conferred on the Late firm of Lawrence and Worthington and begs to inform the customers and the public that she now carries on with good workmen on her own account the business of a SHOEING AND JOBBING SMITH on the premises in The Butts, Worcester, on which her late husband, she, and the Late firm of Lawrence and Worthington carried on.’

Although from this we can see it was clearly Maria running the business, the 1861 census still lists her husband as the shoeing smith and Maria’s occupation is left blank.

In later years Maria and Edward ran a boarding house at Netherton Villa on The Butts, where Maria died in 1873.

Both women’s stories show how our preconceived ideas can often be challenged by the records, but they can also give us an insight into the prejudices of the time. 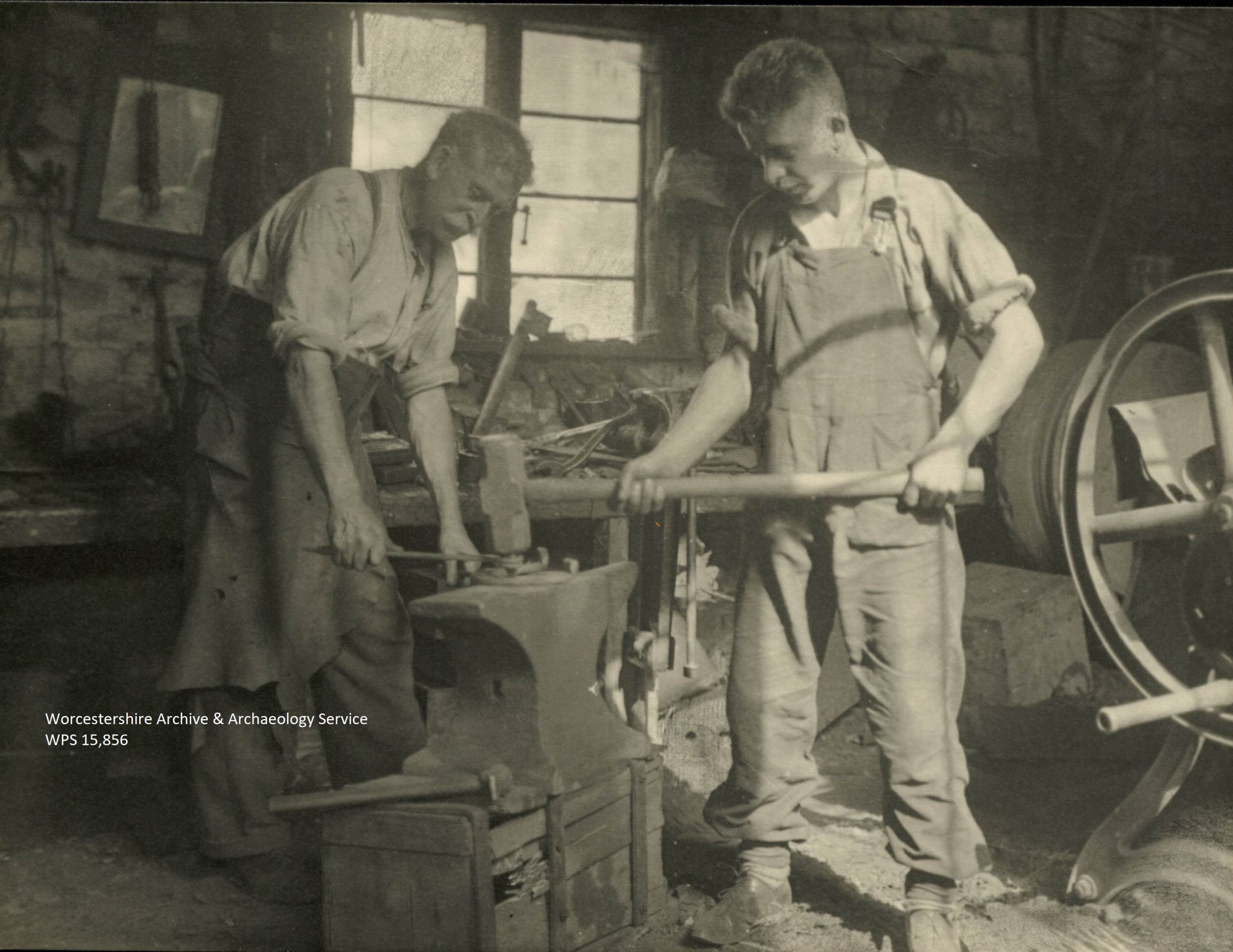 Jim Edwards and his son Sid, the last Blacksmiths to work in the Old Smithy in Wolverley. 1935. Taken by JS Preece BA2328. A typical photo of blacksmiths at work. Although we have several similar photos, all are of men.

Ancestry website – available to access free of charge at all Worcestershire libraries. Please speak to staff for details.