This year marks the 160th anniversary of the establishment of Morris and Co. The firm of Morris, Marshall, Faulkner & Co was established in 1861 by Morris, Rossetti and Burne-Jones, with fellow like-minded artisans and craftsmen to provide beautiful, hand-crafted products as a reaction to mass-production of the Victorian age. Their work was prolific and included ceramics, furniture, wallpapers, floor coverings and stained glass.

Arguably the best example of Morris and Co. stained glass within Worcestershire is to be found at All Saints church, Wilden, near Stourport On Severn.

All 14 window spaces in the church are fitted with stained glass designed by Edward Burne-Jones.

Burne-Jones was designing for his brother-in-law, Alfred Baldwin, who had petitioned the Diocese and paid for the church to be built in Wilden.

In Worcestershire Archives we have drawings for the Foliage and Joshua windows which were given by the directors of Baldwins Ltd in memory of their chairman, Alfred Baldwin. Burne-Jones fascination with Medieval armour can be seen in his detailed, if rather fanciful, drawings. 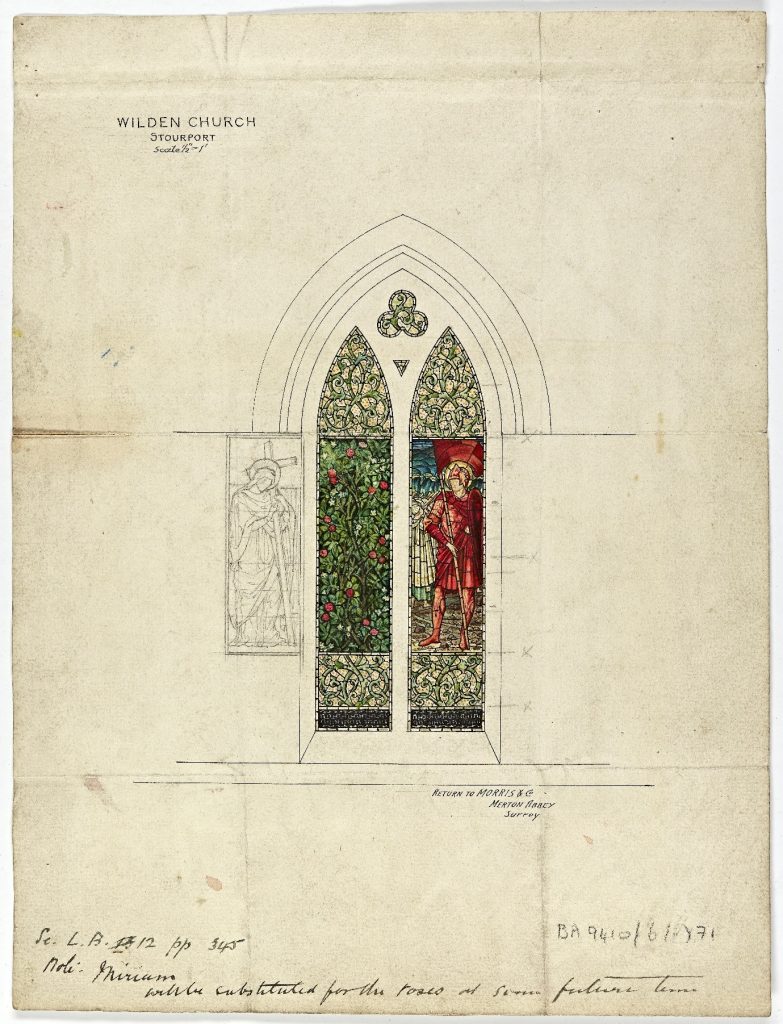 It was intended that the accompanying window would be used to commemorate Louisa Baldwin (Alfred’s wife) when she died. In the meantime the window was infilled using a Morris design of leaves and roses. Plans were drawn up by the firm of Lowndes and Drury, accessing designs from the Morris pattern book, to incorporate an image of St Margaret of Scotland, according to Louisa’s wishes. The plans were never agreed, though, and so the foliage remains in situ some ninety six years after Louisa’s death.

To view the windows, and enjoy this beautiful church, visit the first Saturday of the month. For regular service times please refer to A Church Near You

Worcestershire Archives have a large amount of material relating to the Baldwin family including diaries belonging to Georgiana Burne-Jones (Edward’s wife) and to her maidservant.

Did you know that William Morris had a connection to Worcestershire himself? Find out more at Morris Society Org

Thanks to Pam Craven, Nic Harvey and Julian Manchee for their excellent book “The Baldwins, Burne-Jones & Wilden’s Pre-Raphaelite Glass”.