Have you seen the news today about the amazing Roman mosaic which has been uncovered in Leicestershire? It was No.1 story on the BBC News website for a while this morning. Two of our archaeologists were involved, although most of us are just finding this out because it was top secret and they were sworn to secrecy. 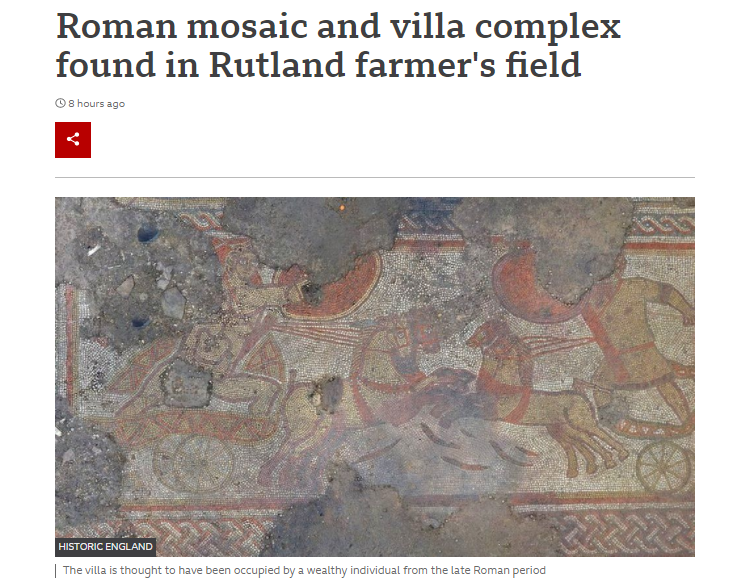 In September 2020, when this remarkable villa and its stunning mosaic were first revealed, Worcestershire Archaeology were contacted by Historic England to provide expert advice to the project on developing an understanding of how farming practices had affected the remains being discovered and assessing how continued cultivation might impact on them.

Robin Jackson and Richard Bradley from our team provided a combination of training, on site advice and office support to the University of Leicester Archaeological Services (ULAS) team leading the site investigation. An initial desk-based survey undertaken with the farmer established the way in which the land had been farmed prior to the discovery and this was followed by Richard visiting the site whilst trial trenching was being undertaken. Although the landowner had made the discovery of the amazingly beautiful and well preserved mosaic at the heart of the villa, work by ULAS was using trenching to investigate surrounding complexes of stone buildings and other features revealed by a geophysical survey. Whilst there, Richard examined the trenches they were digging and advised on the location and use of test pits across the site to provide additional observations on the impacts of cultivation on the site.

In conjunction with evidence from the trenches, the carefully gathered information was then used to develop our understanding of the impact of past and recent ploughing on the remains. The understanding gained was then used to model and assess how future cultivation might damage these remains. In places, especially over the remains of stone buildings at the heart of the villa complex, it was found that remains were buried as shallowly as 20-25cms below the surface. The assessment identified that these were at serious risk from any further ploughing or other forms of cultivation. As result of this work with the kind co-operation of the landowners it has been agreed that the site will no longer be cultivated thus ensuring its preservation for future generations.

At the time of our work in 2020, the half of the mosaic revealed by the landowner had been covered up, so Richard and Robin were delighted to be invited back this summer when ULAS retuned with a team of students from the university to uncover the whole mosaic and investigate other parts of the villa complex.

Film of the mosaic from University of Leicester, with appearances by Richard.

‘In all my years working in archaeology these are simply the most remarkable remains I have ever seen freshly revealed and still in the ground. The images do not really do justice to the detail, the colours and the way light plays across this beautiful mosaic when seen in the ground – it is truly a wonderful piece of work by the people who designed and laid it some 1700 years ago. Richard and I both feel remarkably lucky to have played a part in the investigations and the process which has led to these remains being scheduled and taken out of cultivation thus ensuring that they survive for future generations’ 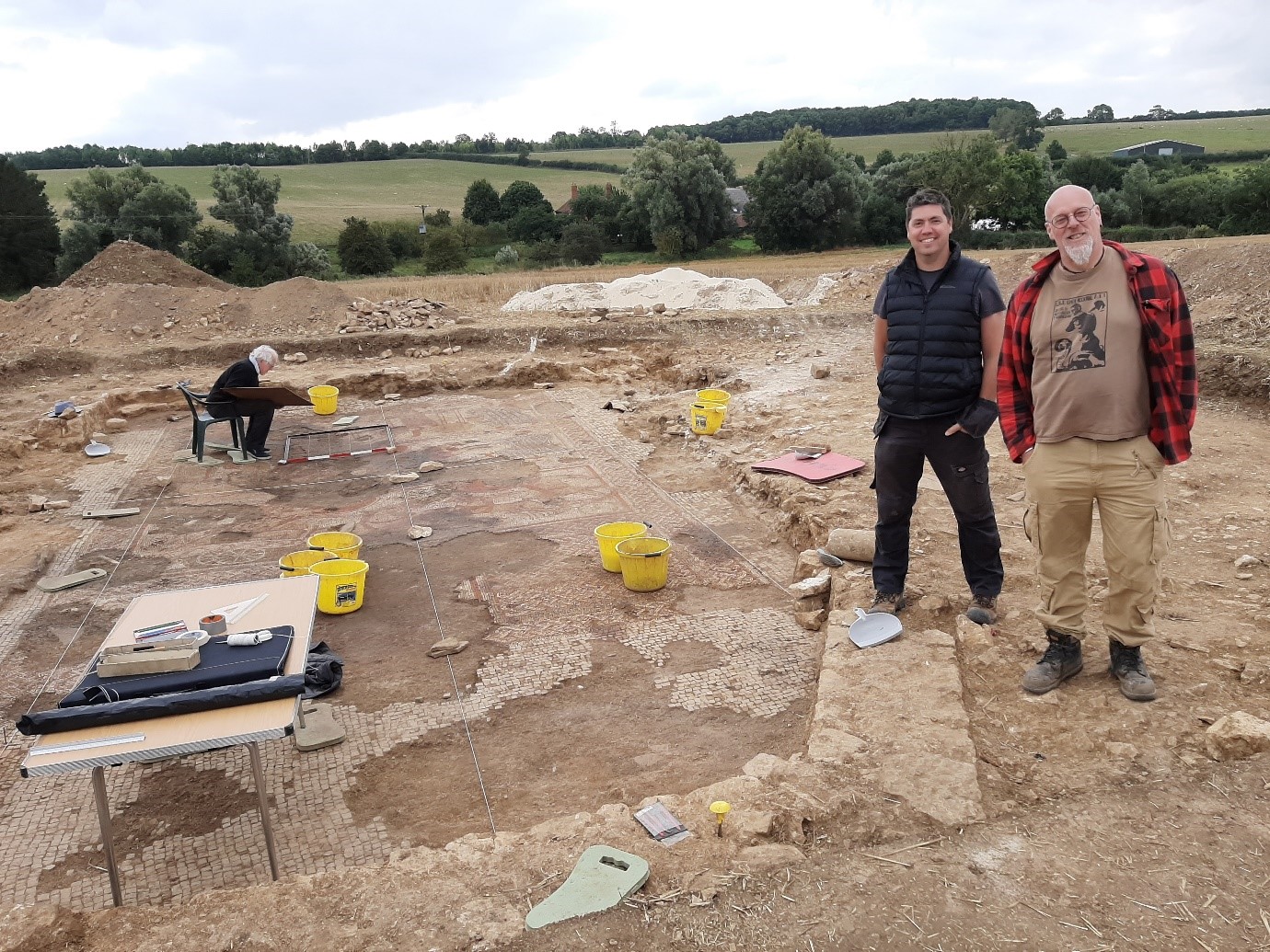 Richard and Robin on site

Why were we involved?

We have been involved over the past 6 or 7 years in the development and undertaking of an approach which is known as COSMIC+. The process involves working with the farmer to complete a desk-based survey to collect information on past and present cultivation practices (including for instance whether it is being ploughed and to what depth) as well as ground conditions on the site. In conjunction with field investigation using test pits to examine the physical evidence of cultivation, this allows archaeologists to develop an understanding of how cultivation has impacted, and continues to impact on, an archaeological site. The information is then used to model and assess the risks that future cultivation approaches might pose if they are continued.

If you would like to discuss how we can help with other projects please get in touch.

This site will be featured on BBC’s Digging For Britain in early 2022, which we’re really looking forward to seeing. In the meantime you can read about it on the ULAS Website or see the video above. 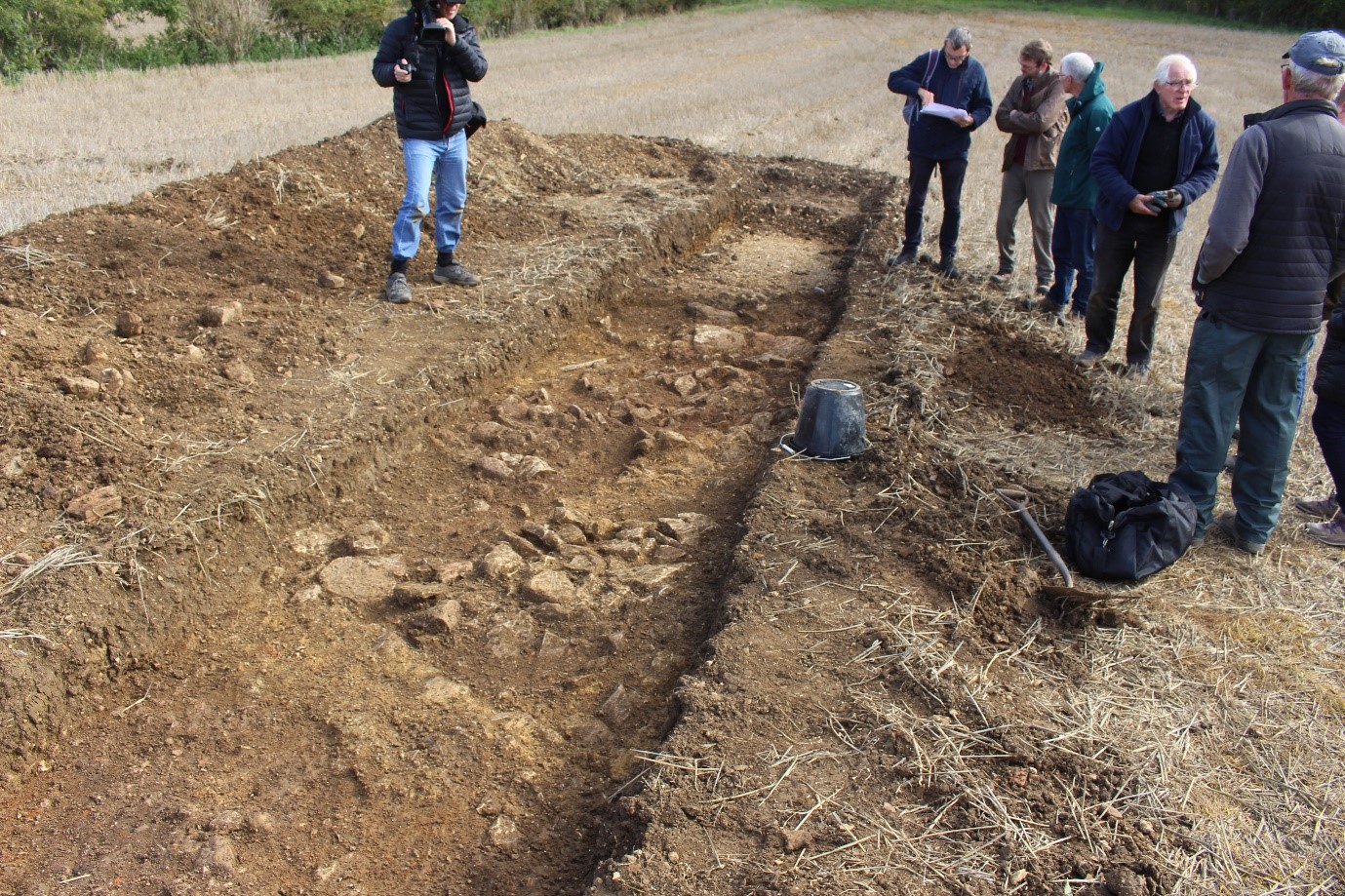 One response to “Roman Mosaic Discovery”

We are pleased that our Worcestershire Archaeology Day returns on Saturday 20th November this year after our Covid enforced break. We are back in The Hive again on Level 0 with another exciting range of talks. Come and join us for our annual Archaeology Day, with talks from staff and guests about excavations, discoveries and...