Nash’s Almhouses jigsaw and real artefact activities at The Hive

On Wednesday, 21st August visitors to the Children’s Library were able to find out about an unusual aspect of the history and archaeology of The Hive site, by participating in an event provided by staff from the Archive and Archaeology Service.  The activities were based around a giant 5 metre long jigsaw of a terrace of almshouses and several  boxes of real artefacts from the 19th century through to the 1960s.

When archaeologists were excavating the site before The Hive was constructed, one of the buildings they discovered was the foundations of a small row of terraced houses.  Further investigation of old documents and historic maps in the Archives revealed that these nine almshouses were built around 1838, nearly 150 years after a charity was originally set up by John Nash, a successful clothier, in the late 17th century.  These plain small red brick houses named after Mr Nash, had only one room down and one room upstairs, with an outdoor shared privy (toilet) and water pump.  The houses were finally demolished in 1974 when they were no longer up to modern standards. 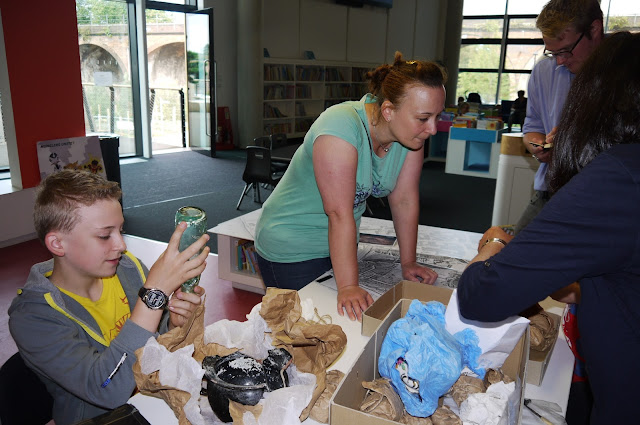 At the event everyone was able to examine a wide variety of weird and wonderful artefacts.  The sort of things that might have been used by the residents who lived in these very ordinary houses.  All were everyday objects such as a Victorian china potty; a 1950s tea strainer; a bone-handled button hook; a marble bottle, a brass box which might have contained cigarettes or chocolate,(sent from Queen Mary to all the soldiers on the frontline during the Great War) and a 1940s badger bristle shaving brush, to name just a few!

It was a great opportunity for people who use The Hive to discover more about the fascinating history of site and to actually handle and find out about real artefacts from the past.