Treasures from Worcestershire’s Past: ~2~ The Ale-Tasters Oath

Today we bring you the second instalment of the Treasures from Worcestershire’s Past, which is an Ale-Tasters Oath from the Worcester City archive collection.

You shall be good and true to our Sovereign Lord King George and to his Heires and Successors Kings and Queens of Great Britain and to the Mayor of the said City of Worcester for the time being; You shall resort to every Brewers house within this City on their Tunningday [the day the ‘tuns’ (casks) were filled with ale] and there to Taste their Ale whether it be good or wholesome for mans body and whether they do make their Ale from time to time according to such Prices and rates as have been rated and Established by the Inquests at the Lawdayes. And according to such good Orders Rules and Constitutions of this City, and upon the defaults hereof immediately to make Relation thereof to Mr Mayor for further reformation and redress therein to be taken accordingly.

So help you God.” 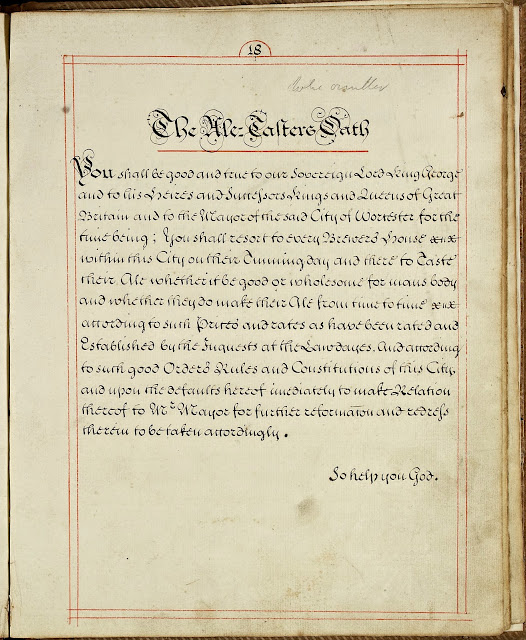 The original Ale-Tasters Oath, which is transcribed above

As the name suggests, an Ale Taster visited all the local inns, houses and stalls selling beer to ensure the quality, quantity and prices were of a good and proper standard. They were an early version of Trading Standards officers.  The Ale Taster would have been appointed annually by the Court Leet and, as with other officers of the Corporation (Council) of Worcester, would have held the post for one year. It was not necessarily as pleasant a job as it first appears. Ale did not keep well and would have had to be brewed regularly on-site, which means some of the ale tasted would have gone off. Ale Tasters were also fairly unpopular in the community, particularly with brewers and victuallers. Those who sold bad ale would be summoned to attend the Assize of Ale at the next Court Leet.

The image and transcription is taken from the Book of Oaths dated 1723. It contains the oaths for all Worcester Corporation Officers, including familiar ones such as Mayor and Town Clerk, and the more obscure like the Ale Taster and Searcher & Sealer of Leather. An earlier Book of Oaths is dated 1679, but is not nearly as attractive as this one with its decorative lettering and use of different coloured ink. It was not cost-effective to produce a new book every time there was a new monarch or an officers’ duties were altered slightly, so some pages have been annotated or amended. 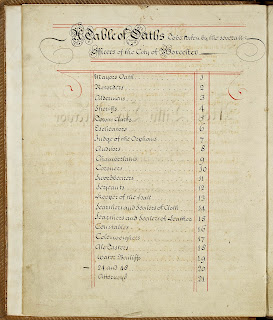 A table showing the Oaths included in the Book of Oaths from 1723.

The Book of Oaths is part of the Worcester City Archive and can be viewed in the Original Archive area at The Hive, reference number 496.5 BA9360/C2/Box 1/ 4.