Treasures from Worcestershire’s Past: ~18~ Salwarpe Purse

This week’s Treasure is an embroidered purse chosen by Julia Pincott, Archives Assistant. Here Julia explains more about this unusual item, which has been found amongst one of the parish collections held within the Archive Service at The Hive:

One of the more unusual items to be found in the Worcestershire Archives is a highly ornate late 13th or early 14th century embroidered purse belonging to the parish of Salwarpe, Worcestershire. 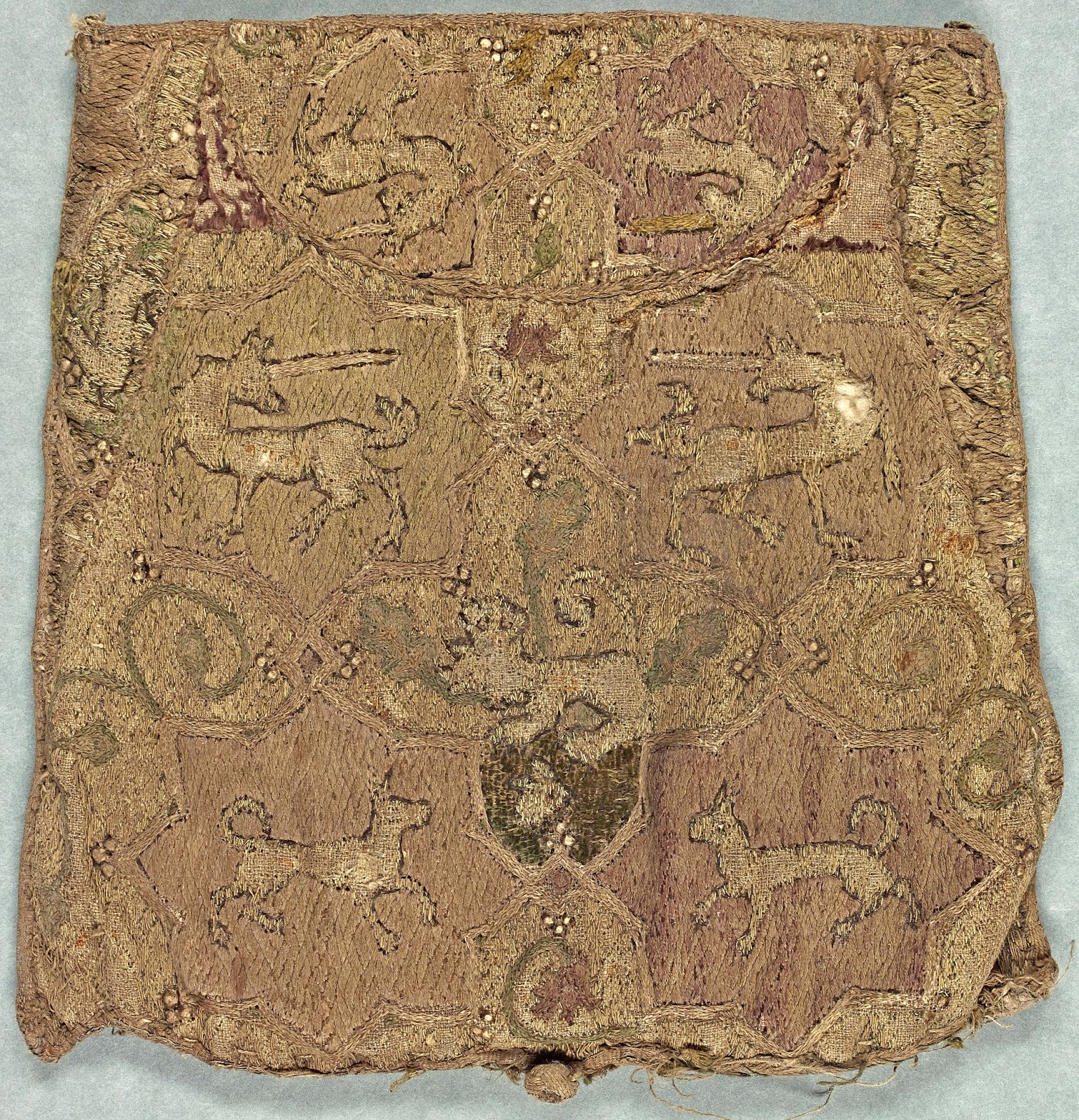 It is a rare example of ‘Opus Anglicanum’ (English Work), the name given to the highly skilled and ornate embroidery produced in England in the Middle Ages. Workshops of highly skilled embroiderers, based predominantly in London, would undertake commissions for the Church, wealthy individuals and royalty throughout Europe. The work mainly consisted of silk, gold or silver-gilt threads worked in couching (laying the thread onto the fabric and attaching it with small over-stitches) and split stitches (the thread is brought back through the previous stitch to split it). It was worked on linen or velvet and occasionally included precious stones and pearls

When the Salwarpe Purse was exhibited at the Victoria and Albert Museum in London in 1963 the catalogue described it as, ’embroidered in silver gilt thread and coloured silks, with a lion, dogs, unicorns and foliage with a lattice formed of eight point stars and crosses’.

Unicorns and lions frequently feature in medieval religious art as they were seen as symbols for both Christ and the Virgin Mary. 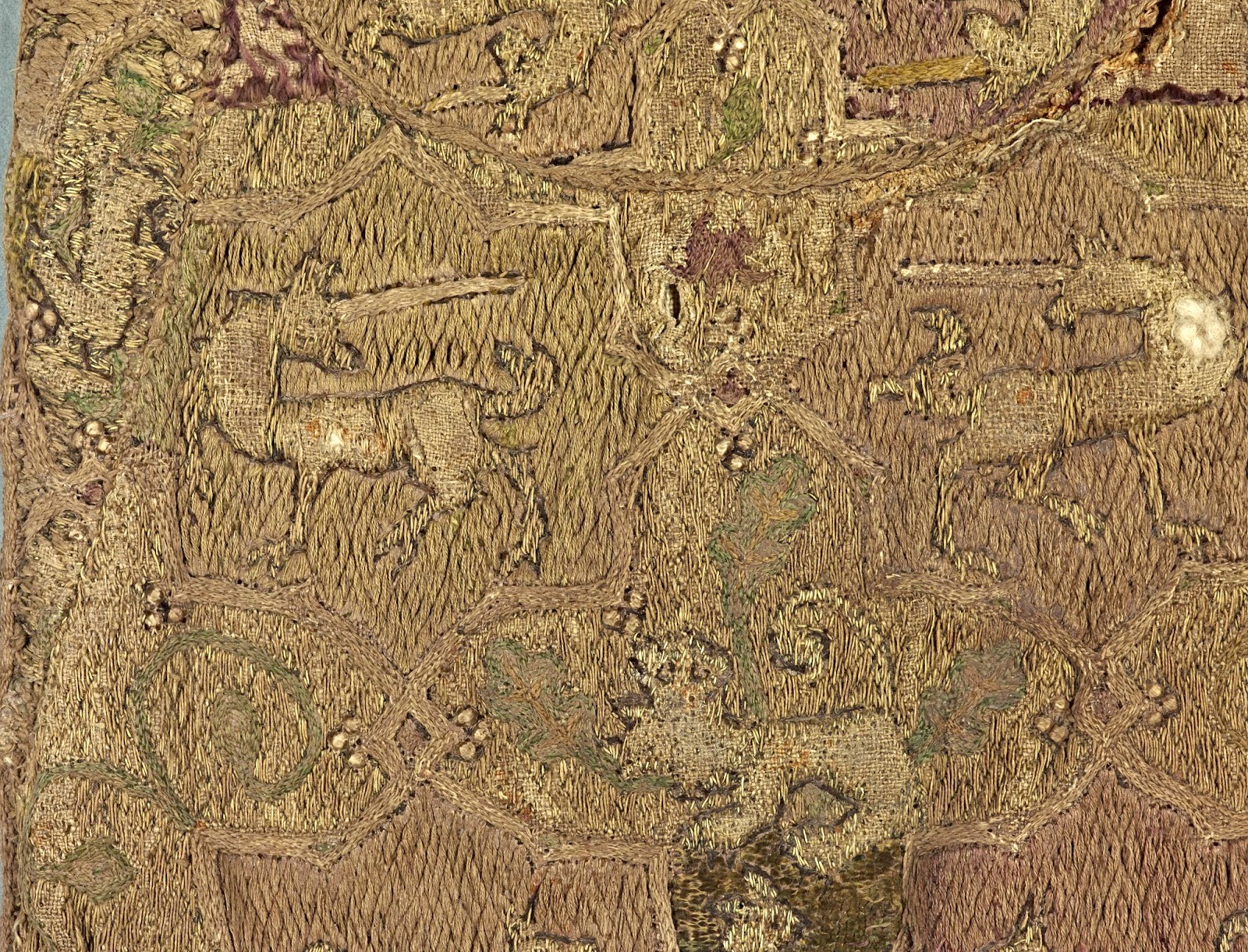 It is believed that the bag was constructed from an earlier piece of work. According to the Victoria and Albert Museum, it was embroidered in the late 13th or early 14th century and was made up into a bag in the 14th or 15th century.

Before it came to the Worcestershire Archives, the purse had been used to store one of the parish of Salwarpe’s most treasured documents. In his book, ‘Salwarpe’, published in 1918, the then Rector of the parish, Rev. Edmund Sinker, describes the contents of the Parish Chest (an oak chest,  more than eight feet long and with three iron locks used to store the important papers and valuable items of the parish). He notes that, ‘the most interesting of the papers is the order signed by Charles II, it is kept in a separate bag of tapestry, with lions and unicorns worked in…’

The order he refers to was sent by the King on 24th August 1651, requiring that thirty able men of the parish be sent to work on the fortifications of the City in preparation for the Battle of Worcester. This is also part of the Salwarpe parish collection kept at Worcestershire Archives.

Nearly all the surviving pieces of Opus Anglicanum were commissioned by or donated to the Church, however, very few examples have survived due to the numbers that were destroyed post-Reformation, when it no longer appealed to the more sober tastes of the new church. Many were also destroyed in order to extract the precious metals contained in the thread.

This item can be viewed in the Original Archive Area at The Hive at reference 850 Salwarpe BA8650/18.