Treasures of Worcestershire’s Past: ~21~ An Eccentric Clergyman’s Will

Newspapers can reveal all matter of interesting things and an article with the above title proved to be no exception.

On searching for a trail that featured in the Berrow’s Worcester Journal, Saturday, November 24, 1888 nestled to the right hand side was a short article with the heading ‘An Eccentric Clergyman’s Will’ which caught my eye. All manner of questions were raised by such a heading, not least what were the details behind this particular story that led to such an interesting heading and more especially what specifically made this particular Clergyman eccentric? 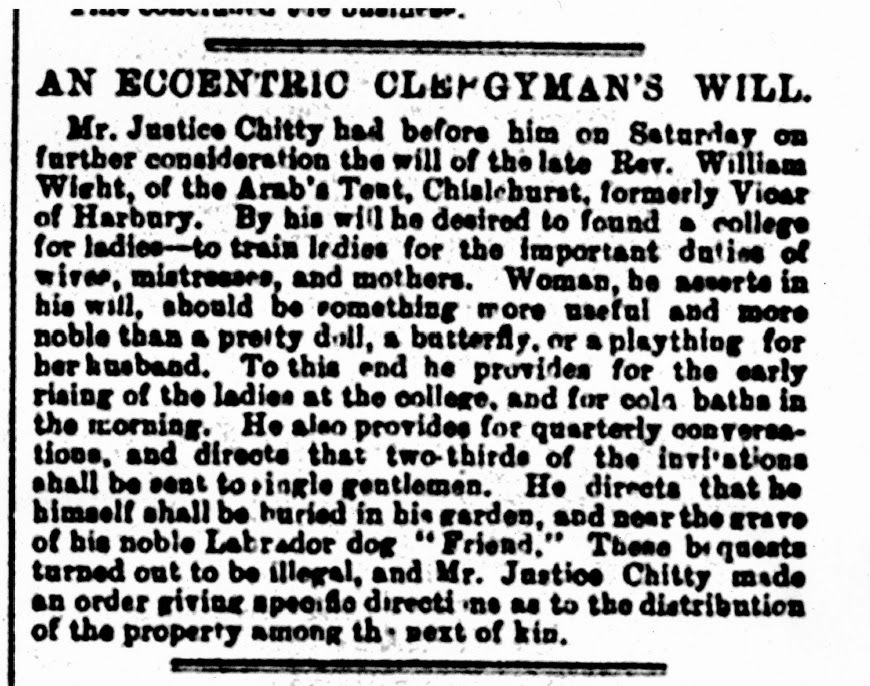 On reading the article needless to say it was not exactly what I was expecting, but then often articles in the newspapers that I come across rarely are. Reports on criminal trials from this period and earlier can often provide illuminating physical descriptions of the accused which on occasion have been so specific right down to the lengths of man’s whiskers. This was a report concerning the legality of a will which, the newspaper report heading would suggest to the reader, was being contested on the grounds of sanity.

The case of the will of Rev. William Wight was heard at the Worcester City Assizes by a Mr Justice Chitty in November 1888. From the first few sentences of the article it is unclear exactly why exception was being taken to his wishes to ‘found a college for ladies – to train ladies for the important duties of wives, mistresses and mothers.’ The reasons behind his request however do provide an illuminating insight into his views that women ‘should be something more useful and more noble than a pretty doll, a butterfly, or a plaything for her husband’. His instructions include ‘early rising’ and ‘cold morning baths for the ladies’. From the money that he bequeaths in his will, he makes special mention that a certain proportion of these funds be spent on ‘quarterly conversations, and directs that two-thirds of the invitations shall be sent to single gentlemen.’ In addition to the these requests Rev. Wight’s will also states that he desires to be buried in his garden near the grave of ‘his noble Labrador dog “Friend”‘.

The Judge’s decision was that Rev. William Wright’s bequests were illegal and instead his property should be distributed amongst his next of kin. It is unclear from the article whether it is the requests for founding a ladies college, or his desire to be buried by his dog that results in the Judge’s ruling. Whatever the reason, it makes an interesting read.

The Newspaper article can be found on the Microfilm 169 for Berrow’s Worcester Journal, which is available to view on the Explore the Past floor in the self-service area of The Hive on level 2.