Treasures from Worcestershire’s Past: ~32~ A horse-and-rider roof finial from Droitwich

This week’s Treasure is a roof finial which has been selected by Laura Griffin, Senior Finds Archaeologist. The item is a rare example of decoration that would have been found on high status houses hundreds of years ago. Here, Laura tells us more:

These two ceramic heads were originally from a single object called a ‘roof finial’ and would have stood on the gable end of a very well-to-do building in the late 13th–14th century. They were found dumped in the remains of a medieval cesspit during the excavation of a site on Worcester Road, Droitwich. 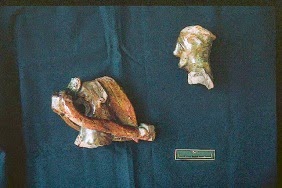 The clay from which the finial was made, indicates that it was produced in Worcester and, although on first appearance it looks roughly formed, on closer examination a fair degree of skill would have been needed to make this object. The horse appears to have been made in several parts with impressions on the inside of the neck indicating that it was wheel-thrown separately to the solid head and attached prior to firing. The resulting join appears to have been deliberately disguised by the addition of thick reins. The mane was also formed separately and attached in two pieces above and below the reins. It stands vertically away from the head and neck in the style of a ‘hogged mane’.

The human head is masculine in appearance and has what appears to be a crown attached to it. So was this finial intended to be a representation of the reigning monarch and if so, what does that tell us about the owner of the building on which it once stood? 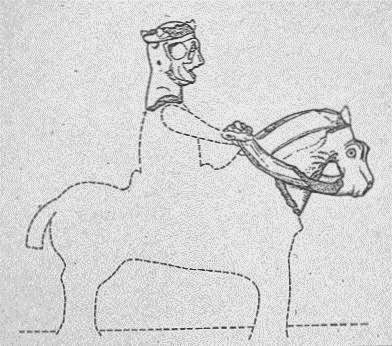 The roofs of higher status houses and buildings in the medieval period were often decorated with crested ridge tiles, and sometimes the entire roof was covered in dark green glazed tiles. Roof finials were purely decorative items and scarcity of examples in the archaeological record leads us to believe that they were a status symbol of their time with only the wealthiest in society being able to afford them.

This ‘Horse and Rider’ finial is the only example of its type in the County and, although up-close it appears to be crudely modelled and decorated with an uneven and blistered green-coloured glaze, when viewed from street level it would have looked impressive.