Treasures from Worcestershire’s Past: ~46~ Seals

This week’s Treasures have been chosen by Robin Whittaker – our former Archives Manager from our days as Worcestershire Record Office, based at the County Hall branch on Spetchley Road. Although he is now retired, Robin still frequents our Original Archive Area at The Hive, both as a volunteer and as a private researcher. Here, Robin tells us more about the fascinating selection of personal seals that can be found within our archive collections:

On my retirement from the Worcestershire archives in 2011 I wanted some projects that would keep me in contact with original documents. I had recently got a copy of Dr Elizabeth New’s ‘Seals and Sealing Practices’, published by the BRA, and I realised that in all the years I had been examining medieval deeds I had to some extent taken the seals for granted, and this struck me as a potentially interesting new field of study. A trip to the National Library of Wales to meet Dr New and see an exhibition she had put on there on Welsh medieval seals convinced me.

I decided that the parameters of my study would be personal seals held in Worcestershire collections up to 1500. Much work has been done on royal and ecclesiastical seals so I thought I’d concentrate on the seals of the lower strata of society. I wanted to see how seals varied over time, what sorts of images were used on seals, and also see if I could get an idea of how seals were used – did people borrow the seals of others? Did women have their own seals or did they use those of men in their family? Did the images on seals have any special significance? These were some of the questions that came to mind. 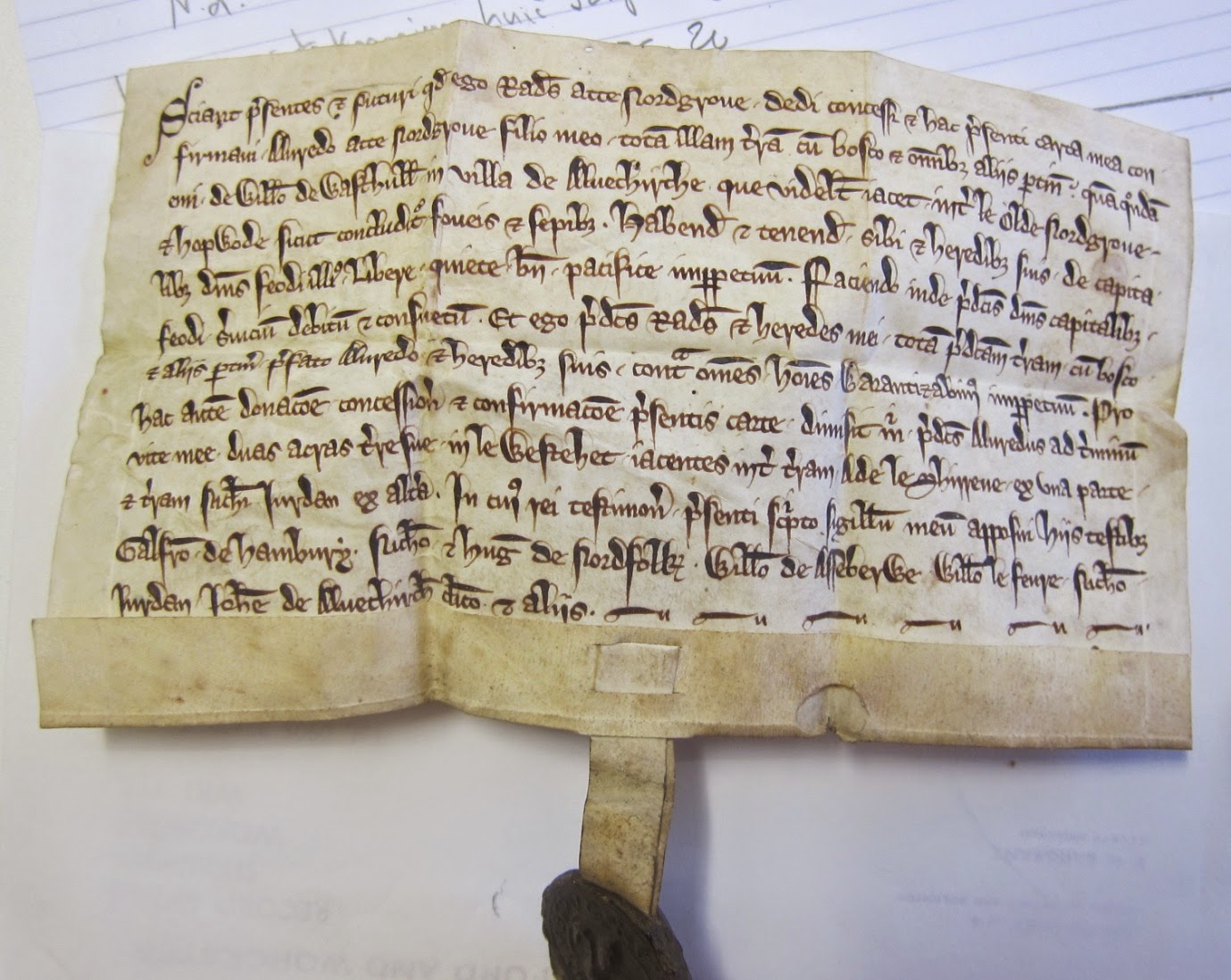 The procedure I have been using to gather my corpus of examples is to systematically examine all the accessions in the Archive and Archaeology Service from BA 1 onwards and identify those which have deeds pre-dating 1500. I then examine these boxes to seek examples. In any box of medieval deeds it may be that at least 50% have lost their seals and another 35% have very damaged examples. So for any box I search it may be that only a few deeds yield examples I can use. These I record on a standard form, recording reference, date, parties, and sealing clause. I then describe each seal giving its size, shape, colour, material (almost always wax) and the image and any inscription (though often illegible). Even on a well-preserved seal these can be difficult to decipher, and I am learning to recognise various medieval religious symbols and family coats of arms. I also take a photograph of each seal and then (having been instructed by the Conservator, Rhonda) apply a simple protective covering. 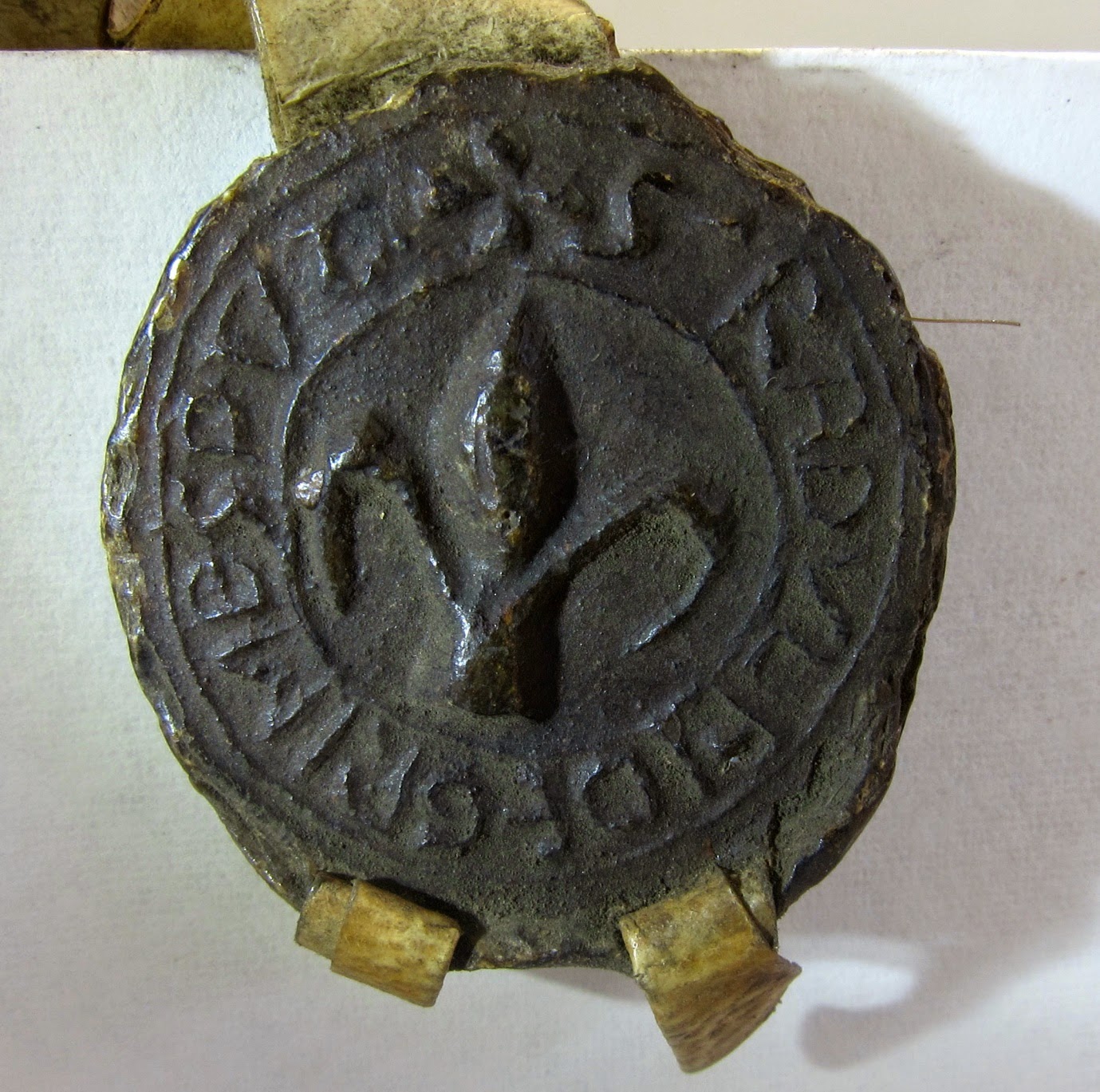 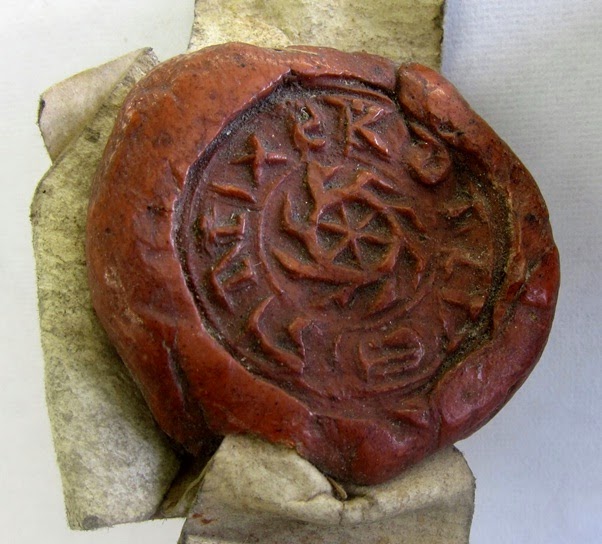 I have now recorded about 350 examples, and can see some patterns emerging. Sometimes I can guess the approximate date of a document merely by the appearance of the seal, the image chosen and the inscription. Thirteenth-century examples might be simpler fleur-de-lys, eight-pointed stars/flowers or coats of arms. Fourteenth-century examples might have more complex religious symbols, and by the fifteenth century many seals just bear an initial letter. Some seals defy identification, and there are quite a few with coats of arms where, to date, I cannot identify the family. The project offers up many areas for further research. In due course I hope to explore other archives in the county, such as that at Worcester Cathedral, to add to my examples. 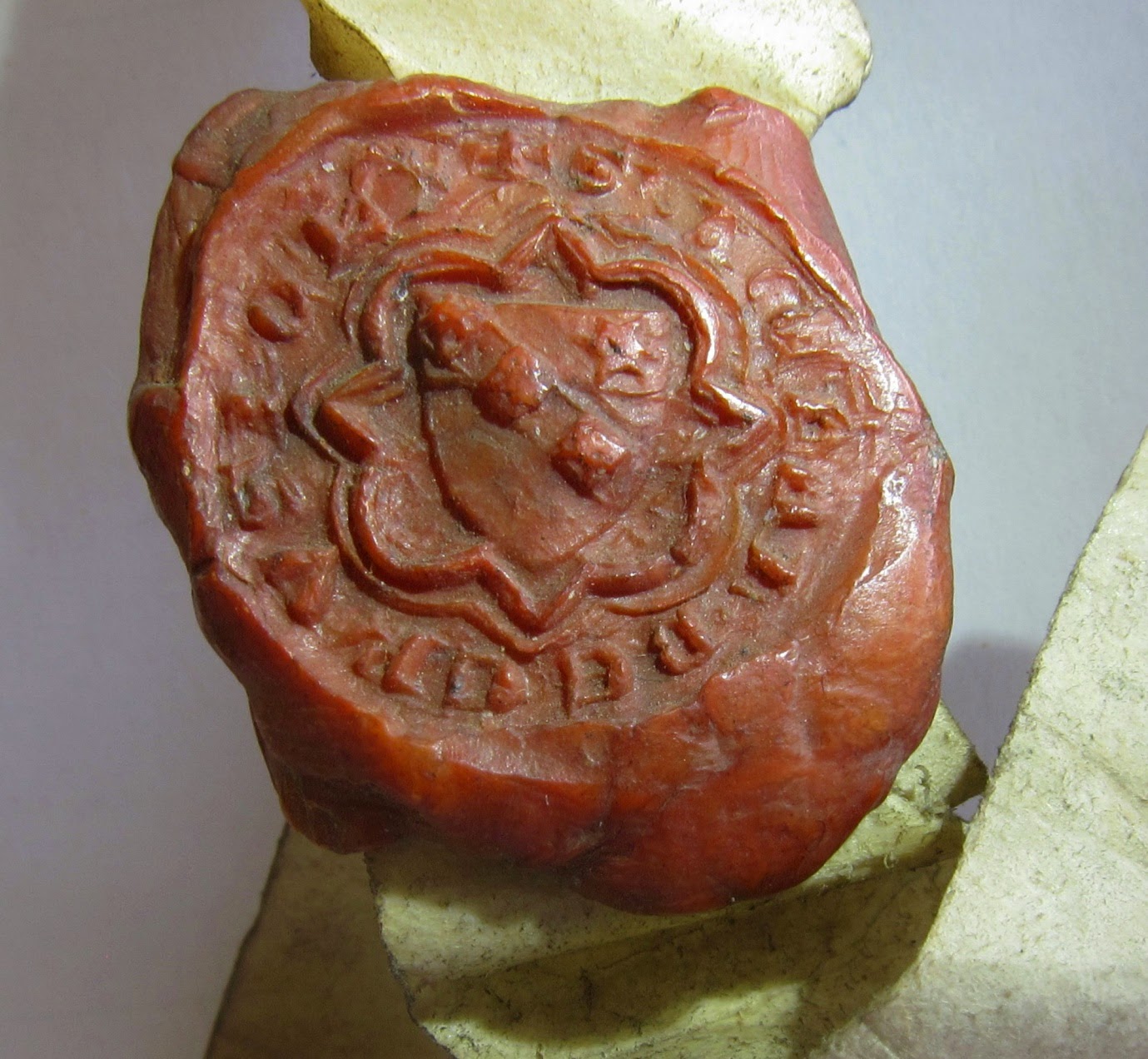