Algars Manor: Oats and more underneath the floor

The owner of Algars Manor at Iron Acton in Gloucestershire recently lifted some floor boards on the first floor of his house during building renovations, and was surprised to find a bed of material that looked like wheat, chaff or straw beneath. He was interested to find out what this material was, and if it dated to the early use of the house. The house is Grade II listed and beams in the house have been dated to 1552 by dendrochronology (or tree-ring dating). 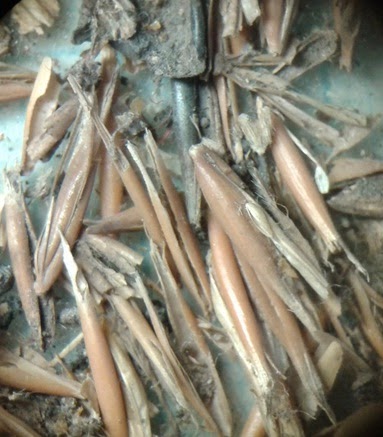 He sent the material to Liz Pearson, Environmental Archaeologist at Worcestershire Archaeology. Once viewed with a low-power microscope the nature of the sample became clearer. It is mostly made up of cultivated oat with some wild oat, fragments of ears from two different types of wheat, apple pips and pieces of what appear to be dried and leathery apple fruit or flesh (one pip is embedded within this material). There are also small shattered peas, sedge chaff and fibres which are likely to be flax or hemp. Seeds such as black medick, black bindweed and buttercup were probably weeds growing with an oat crop.

Of the two types of wheat, one is particularly characteristic of the early era of this house. Ears of a type of wheat most likely to be rivet wheat were found in this sample. It is no longer grown in this country today, but in medieval times (and into the 17th and 18th centuries) it was one of the crops adding essential variety to the staple bread wheat grown at the time. Fragments of ears from the more common bread wheat would have come from a long-straw wheat standing shoulder height to someone of average height – quite different to the short wheat grown today which barely grows beyond 2 feet high. 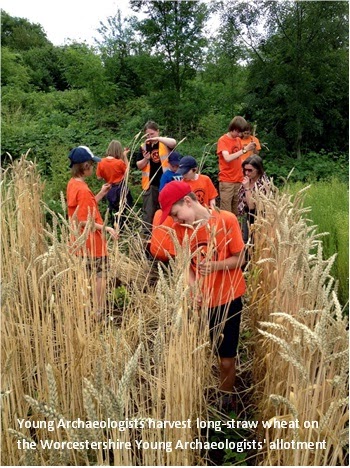 Oddly the oat chaff, or florets, despite being tightly closed are entirely devoid of any grains, and it can only be assumed that for some reason the grains have perished, leaving just the hardier chaff behind. One reason for this may have been infestation by insects. For example, the female granary weevil lays a single egg in the grain, then plugs up the hole. The egg hatches and the larva feeds on the grain, hatching as an adult weevil. No granary weevil remains were found, but a few spider beetles were found (identification courtesy of David Smith, University of Birmingham). This is a common inhabitant of dry materials, dust bunnies and old food in ‘mature housing’, and it is quite common in roofing thatch as well. 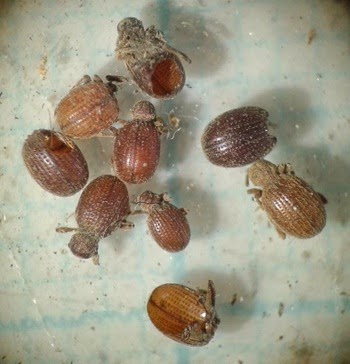 So why would this material be found underneath the floorboards on the first floor? Possible suggestions are:

A combination of the above could have been responsible. Does this date to the early years of the house? The rivet wheat would rule out modern debris, but more conclusive is a tiny fragment of green glazed pot which is most likely to be from a Tudor Green ware vessel in use during the 15th and 16th centuries, says Laura Griffin of Worcestershire Archive & Archaeology Service.

However one interprets how this material came to be found underneath the floorboards, it provides a colourful snapshot of life in a Tudor house.