We are delighted to introduce you to David Tyrrell, who has been working with us since last September. David has been busy getting involved in different aspects of our varied work here at Worcestershire Archive and Archaeology Service (WAAS). Here he introduces himself and tells us some more about the work he has been doing so far:

My name is David and since September 2014, I’ve been working with WAAS thanks to a partnership between Remploy and Worcestershire County Council. Remploy is a service that helps people with disabilities gain employment by running training courses and running job searches so people don’t feel so isolated. The groups were friendly and I made a couple of like-minded friends that have interests in historical battles.  My disabilities are hidden ones. I found it really difficult to find work having been unemployed for three and a half years, but now I consider this to be my first ever job and I feel much happier. This role has already given me a lot of confidence in myself and my abilities. 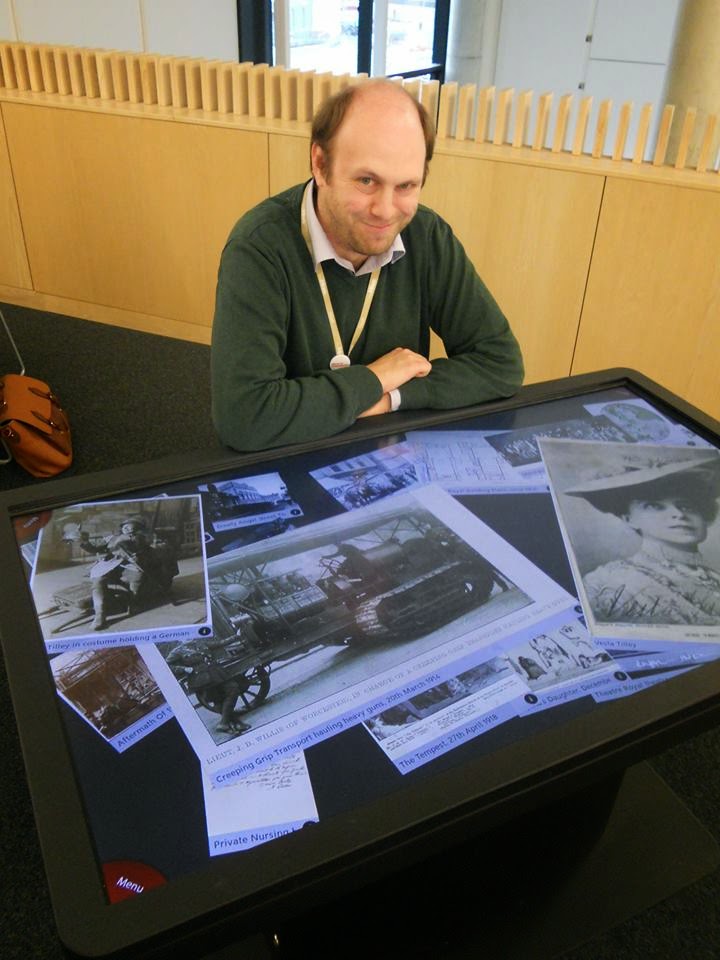 David, with the work he produced for the Touch History table at The Hive

In 2011 I finished and graduated from Aberystwyth University with a degree in drama. I think theatre is a roundabout way of looking at history from another perspective, which is good because I always look at things from a different angle. Whilst at WAAS I have been working on the Worcestershire World War One project and this has improved my research and organisational skills. I have developed a methodical approach to work from cropping all the fallen soldiers and developing a way of presenting the information so that other people can use it. I am finding that with this experience I am more focused in what I’m looking for.  I am also developing my knowledge of the area – before I came to WAAS I had no clue who Vesta Tilley was or that Worcester had musical or theatrical claims to fame, apart from the musical genius that is Sir Edward Elgar. I am now using different types of sources, such as maps, building plans, and photographs and trade directories, which can get a little bit addictive as I keep on wanting to know more and more.

Another project I have worked on is gathering available material together to form a presentational piece to go on our Touch History table at The Hive. I am also currently putting together a heritage trail that follows Vesta’s history in Worcester, and some more general World War One history about the development of the tank from agricultural steam driven vehicles before she went on to became Britain’s greatest recruitment sergeant. Vesta Tilley was a music hall performer and her act was a male impersonator. I like discovering new facts in my research here, for example I have discovered that Worcester’s former mayor Arthur Carlton played various Shakespeare Characters wearing tights and his wife was apparently was shot out of a canon as part of a circus act! I enjoy looking at historical photos held by the Archive Service and seeing things such as the opening of the Swan Theatre, or learning that we once had more theatres in Worcester and one once stood where the Angel Street Co-Op supermarket now is. I look up occasionally to try and imagine where the building stood.

I am very proud to have contributed to work at WAAS and hope that people can come to learn as I have. As a person not used to socialising I have found that my people skills have improved by communicating with my colleagues across the service. I can now put this on my skills belt as ‘networking.’ I’ve had to adapt to new ways of working in an office environment – I’ve found out that there are many different people with different quirks and have developed ways to work alongside them. I sometimes find that I drift and ask questions about things like the Tudors, Shakespeare, the price of beer in the late 1860’s and the history of cake, but don’t worry, it’s all connected to my interest in history and curiosity in the past. I enjoy digging for research and I am surprised at what I can sniff out here. I used to do those dot to dot books, when I was little, now I connect the links in history instead.