Today is the 200th anniversary of the Battle of Waterloo and we’ve been looking for documents and sources relating to the famous battle within our collections here at Worcestershire Archives.

Here is the story as it was told in the Worcester Herald of 24 June 1815. In the days before TV and radio this was how people discovered the news, and local newspapers often had more national news than local news. They also printed the letter which Wellington sent back.

Included within the army were Worcestershire men. One of these was Isaac Webb, who served in a Guards Regiment. He lived for a number of year in Dandy Row, Worcester, and was the subject of one of our blog posts on the street.  He lived out his last few years in Nash’s Almshouses, on the site The Hive. This is the announcement of his death in the Worcester Herald of 12th May 1866.

Within the Croome Collection there are a couple of interesting related documents. One is a letter from A.C. Crauford who talks about how he might have to pay his brother’s debts after he was killed in Waterloo. There are also some interesting letters from Sir Willoughby Cotton, who was related to the Coventry family through marriage and served in the army in the Peninsular War. One letter from 1807 described Sir Arthur Wellesley, later Duke of Wellington, who he was posted to serve with. He describes Wellesley as being “a most enterprising and capital officer”. Cotton was in London when the Battle of Waterloo took place, but was sent out immediately after to join Wellington’s staff due to the number of officers who had been killed. 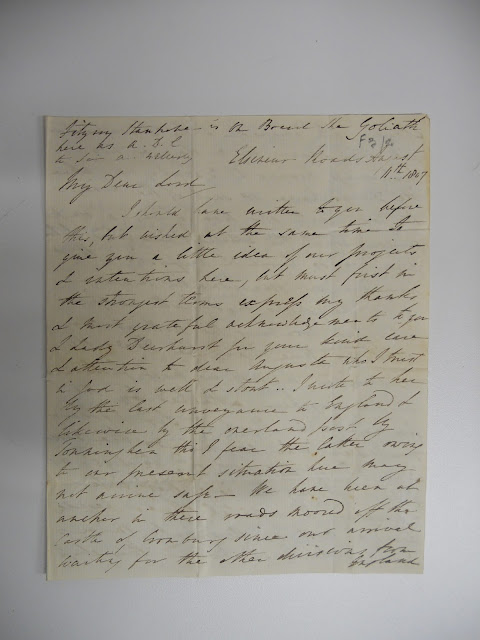 See also the story of Henry Martin and the Battle of Waterloo as told through a letter he sent which we hold in the archives.

Do any of our readers have ancestors who fought in this famous battle? Has anyone discovered other Waterloo documents within our collections? We would love to hear from you; pop a comment below or tweet us @ExploreThePast.

One response to “Battle of Waterloo 200th Anniversary”