Henry Martin and the Battle of Waterloo

Following on from our previous post about the 200th anniversary of the Battle of Waterloo we have come across a letter at the Hive from a soldier who was at the battle.

Local man Henry Martin was an officer with the 2nd Battalion 44th Regiment of Foot (East Essex) and seems to have served in both the Peninsula and Waterloo campaigns.  Henry was keen to let his family know he was in good shape after the Battle of Waterloo and put them in the picture as to his role in events, so he penned a quick letter to his father dated 29th June 1815.  His father in turn copied the letter out for Henry’s brothers at Oxford to see his account in his own words.  It is the contemporary copy that we have, not the original. 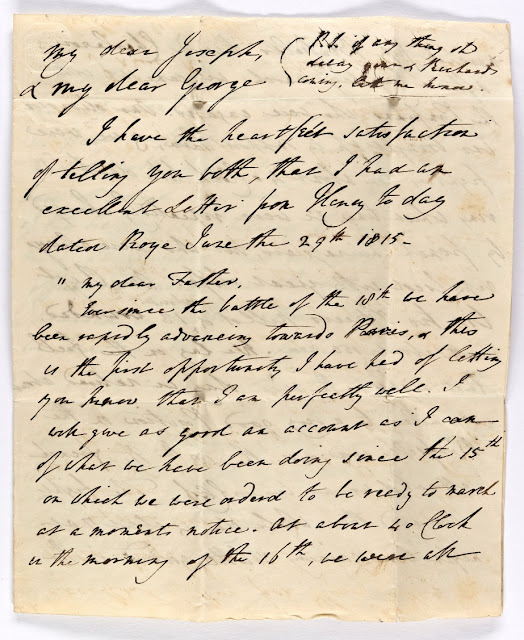 In his letter Henry explained his Division had been bought up to support the Prussians on the 16th June.  ‘We were fighting from about 4 o Clock till dark, during which time we were repeatedly charged by french Quirassiers, but who were repeatedly repulsed with great loss.’  This might be a description of the battle of Quatre Bras as the 2nd Btn of the 44th were badly knocked about at that encounter with the French on the 16th.

As for the Battle of Waterloo itself on the 18th Henry summarised events very succinctly saying ‘the french attack’d us at ten o Clock.  The fight continued the whole day & about 7 at night were gaining a little ground on the right, the Prussians (who were expected before) made their appearance, which decided the day.  The French ran in great confusion, & our cavalry & the Prussians made terrible havock among them.’ 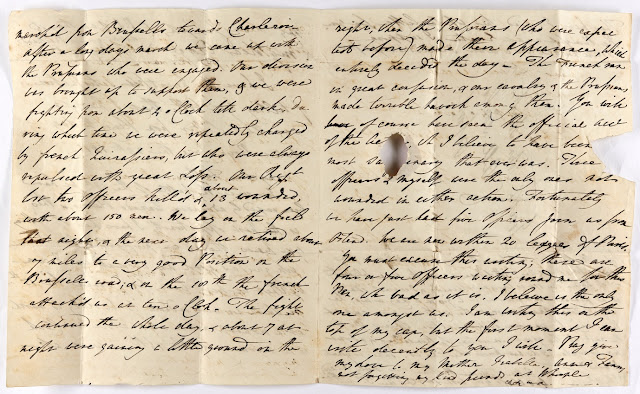 Henry was one of the few officers in his regiment to survive both battles unscathed.  He apologised for his writing explaining he was writing the letter on top of his cap and that ‘there are four or five officers waiting around me for the Pen, w[hic]h bad as it is, I believe is the only one amongst us.’

Readers of Bernard Cornwell’s Sharpe novels will recall that some of the South Essex Regiment’s exploits in his books are in part based on the 2/44th’s actions around this time.

For further information about the 44th East Essex and the Battle of Waterloo generally see:

You can also check Ancestry’s database for details of those who received the Waterloo Medal, which included Henry Martin. The original list is at the National Archives.