One of the most frequently visited graves in Sanctuary Wood British Cemetery is that of Lieutenant Gilbert Talbot.  Gilbert served with the 7th Rifle Brigade and was killed at Hooge (Ypres Salient) 100 years ago, leading his men during a counter attack.

Gilbert Talbot his life in brief 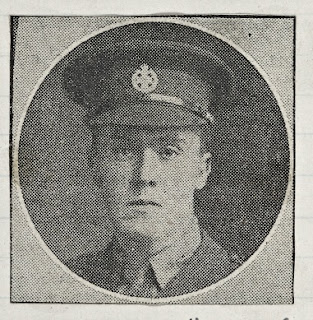 Picture of Gilbert Talbot from his mother’s diary

Gilbert was the youngest son of Rev Edward Stuart Talbot and Lavinia Lyttelton, daughter of 4th Lord Lyttelton of Hagley Hall.  He attended Winchester College and then went on to Christchurch, Oxford in 1910.  He played a prominent role in the political and social life of the University, becoming president of the Union in 1913.  He completed his degree in 1914 and had just started off on a tour around the world when war broke out.  He returned at once and obtained a commission in the 7th Rifle Brigade. He went to the front in May 1915 and was killed just a few weeks later on 30 July 1915.  His body lay where he fell for a week until his brother Neville, also serving in the forces, was able to bring it back for burial.  He was aged just 23.

One of his friends at University was former Prime Minister Harold Macmillan.  He wrote in his autobiography Winds of Change (1966) of Gilbert’s death  ‘Among the most grievous to me of the losses in 1915 was that of Gilbert Talbot. I had known him well at Oxford. I had stayed with him at Farnham, where his father – the Bishop of Winchester – and Mrs. Talbot lived, and savoured the rare quality of that atmosphere. I feel certain that if he had been spared he would have made a great mark in our politics.’  Certainly the people who contributed to a memoir of Gilbert’s life felt had he lived, he was destined for greatness. In the memoir they drew attention to his excellence as a speaker, debater and storyteller, his skill as a leader of men, his great sense of humour, his generous friendship and his vitality. For many Gilbert Talbot became the symbol of a “Golden Generation” of young men whose lives were cut short by the First World War.

One of Gilbert’s last letters recorded in the memoir was to his cousin Hermione Lyttelton in June 1915.  In it his thought turned to home:

‘At times one’s thoughts fly back to all the precious things in England, a thousand times more precious now.  I think of Farnham, Winchester, Oxford in summer.  What Winchester meads are like on a holiday in June or Magdalen cloisters on a May evening.  And one thinks of all the family and the happy times we’ve had, the love that binds us all, and Mother and all she is to me, and I don’t feel ashamed of wondering fairly often if I shall see them again and if so when.’

The Lyttelton collection at the Hive includes Gilbert’s mother Lavinia’s wartime diaries.  Lavinia records in some detail her thoughts, feelings and opinions as the events of the war unfolded.  She had three sons serving – Neville, Edward and Gilbert – and her diaries are full of what they are doing as well as more general comments on the conduct of the war.  Her diary entry of 1 August 1915 recorded that ‘Gilbert has been in pretty hot fighting in the Hooge trenches, winning & then losing again.  Liquid fire has been used’   She continued later in the entry ‘Gilbert & his Co meantime are mercifully being returned to Poperinghe for a week off.’  Tragically Gilbert was already dead as she recorded this.  On 2 August she received an ‘anxious’ letter from her son Neville about the Battle of Hooge.  On the same day she received and recorded the dreadful news of Gilbert’s death and felt that ‘most of the light in my life had gone out’. 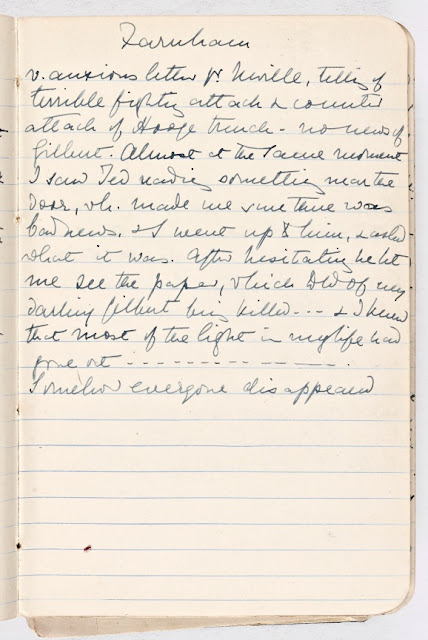 Lavinia’s diary entry for 11 August 1915 recorded that she had received news that Gilbert had been buried and information about the circumstances in which his brother Neville found his body. 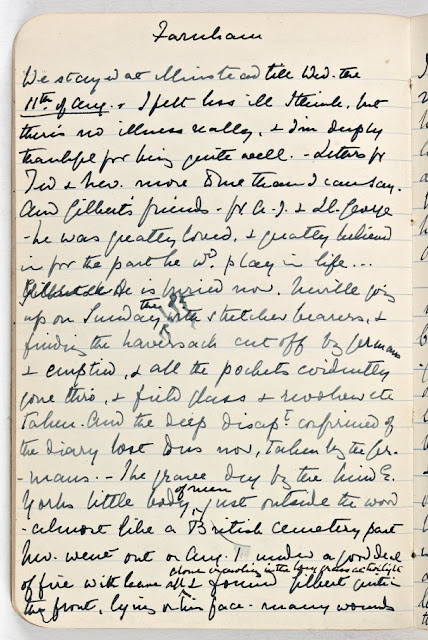 Lavinia never got over the loss of Gilbert.  She wrote a memoir of his life which was privately printed in 1916.   She recorded the age he would have attained on each of his birthdays and marked the date of his death with a cross in her diaries.  When the war ended at last she recorded honestly and poignantly the internal conflict within her – the intense joy at the war finally being over, but also the intense longing for the son who would never return. 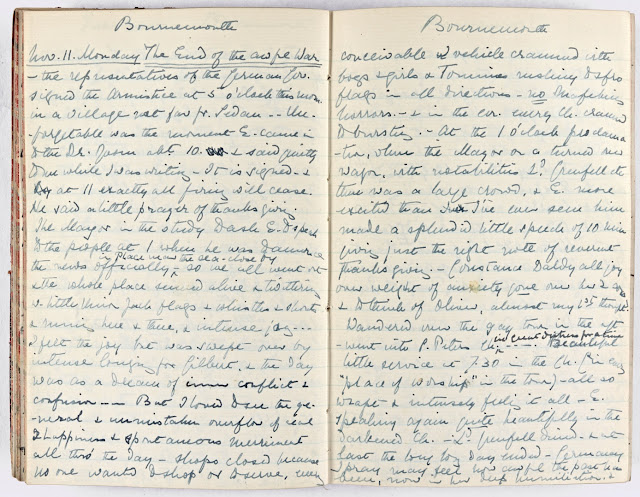 Neville Talbot was an army chaplain at the time of his brother Gilbert’s death.  He, together with a fellow army chaplain ‘Tubby’ Clayton established a place of rest and relaxation for soldiers regardless of rank at an old town house in Poperinge, Belgium which they called Talbot House in Gilbert’s memory.  Talbot House opened in December 1915 so will be marking its centenary in 2015.  It became known by its initials ‘TH’ and then as Toc H the signal terminology for T and H.  Tubby Clayton tried to make Talbot House a cosy home from home with rugs and vases of flowers, a stark contrast to the muddy trenches.  A notice was hung up bearing the message “All rank abandon, ye who enter here.” Harry Patch ‘the last Tommy’ recalled of Talbot House  that ‘a lot of us used to call it “the haven” because that’s exactly what this place was to the men – a place of peace where you could relax, and that’s the only time you could forget the strains of war for a couple of hours.’  Gilbert, whose thoughts were often turned to home, may well have concurred.

The full text of the memoir on Gilbert is available online.

For information on the battle of Hooge see: