Stray gnashers in the archives

Today we bring you another post inspired by the 200th anniversary of the Battle of Waterloo. A story which has been picked up elsewhere is the somewhat grisly one about ‘Waterloo teeth’, which serves as a stark reminder of just how far we have come with dental practices today. The story goes that in response to a growing need for replacement teeth, thanks in large to an increase in sugar consumption; scavengers descending on the site of the battle of Waterloo took not only money and jewellery from the dead, but also extracted their teeth so that they could sell them on.

For many years there has been suspicion that a set of false teeth we hold in our archive collections are actually Waterloo teeth, but we have never been certain. 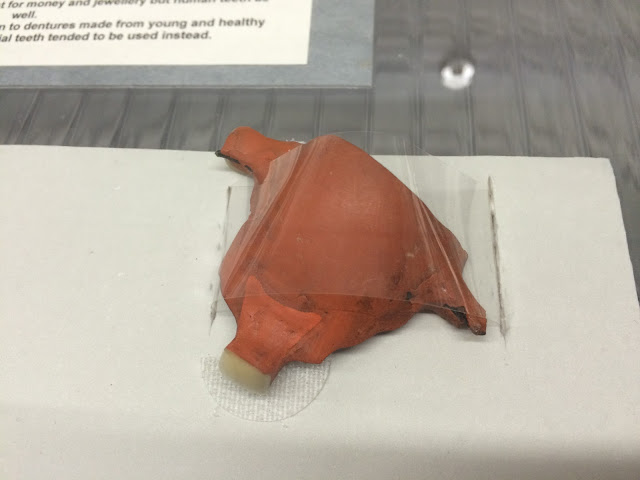 One of the dentures we hold in our collections – not your usual find in an archive!

The dentures came to us many years ago when one of our archivists went over to Tenbury to see a solicitor who had just bought a new practice. He had two rooms full of records and said we could take what we wanted, having no real idea himself of what was there. After having a quick look we said he could keep the one room, full of records which fell outside of our Acquisitions and Collections Policy, but that we would take the other. We arranged for those boxes to come back to Worcester, and two students helped us to go through the boxes, and it was they who came across the teeth! We also found a pistol, but as well as not coming under our collection policy we were not licensed to keep firearms, so we had to pass that on to the Museum. 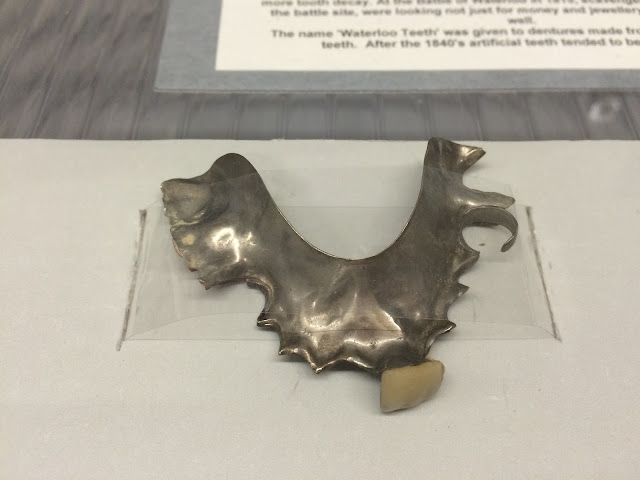 It was suggested at the time of discovery that the teeth could be Waterloo teeth, due to the documents they were found with dating from the same period; however, there was never anything to prove this. At the time we knew little about the appearance of Waterloo teeth. With the recent anniversary we did a bit of investigating, and have been able to compare our own to a number of sets online and in books. Upon further inspection ours do not appear to match, and look to date from a later period. Although we now know they are nothing to do with Waterloo, we still do not know why a pair of dentures were ever stored with the archives!

Have you ever come across an old pair of dentures like this before? Can you tell us when these may date from?