Celebrating 600 years since the Battle of Agincourt

To mark the 600th anniversary of the Battle of Agincourt (25 October 1415), we wanted to show you a document in our collections issued by Henry V several months before the famous victory over the French.

Worcestershire has long been associated with Agincourt.  Michael Drayton’s 17th-century poem The Battaile of Agincourt famously evoked the Worcestershire bowmen, their banners emblazoned with the pear that is still emblematic of the county today.  Whilst we do not hold a direct documentary connection between the county and Agincourt in the archives, we do have a document shedding light on the ways in which the machinery of Henry’s government interacted with the local area in the early years of his reign, in the run up to the campaigns in France. 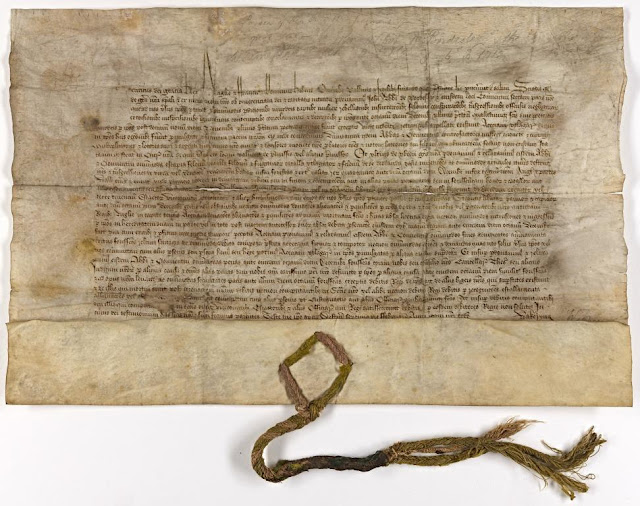 Letters patent of Henry V, pardoning the Abbot and Convent of Bordesley.  The document lacks the large, decorative initial “H” (for Henricus, or Henry) that typifies other documents of this type, which could mean that the document was unfinished.  Ref. BA 15587

Our document consists of letters patent[1] issued by Henry V in favour of the abbot and convent of Bordesley, a Cistercian[2] monastery located in what is now Redditch.  It pardons the abbot and convent for “all treasons, murders, rapes, rebellions, insurrections, felonies, conspiracies, trespasses, offences, negligences, extortions, misprisions, ignorances, contempts, concealments and deceptions” committed between November and December of the previous year, as well as a variety of other offences such as those against forest law and the statute of liveries of cloths.

Upon reading this, one might think that Bordesley Abbey harboured some extremely miscreant monks!  After all, a Bordesley novice had been imprisoned in Newgate in the 13th century, there was a scandal between a monk and a local woman early in the following century, and one monk was pardoned for the death of another in 1339.  In the 1360s, a little over a decade after the Black Death had first ravaged England, monks (and even possibly a former abbot) twice attempted to seize control of the abbey through force of arms. 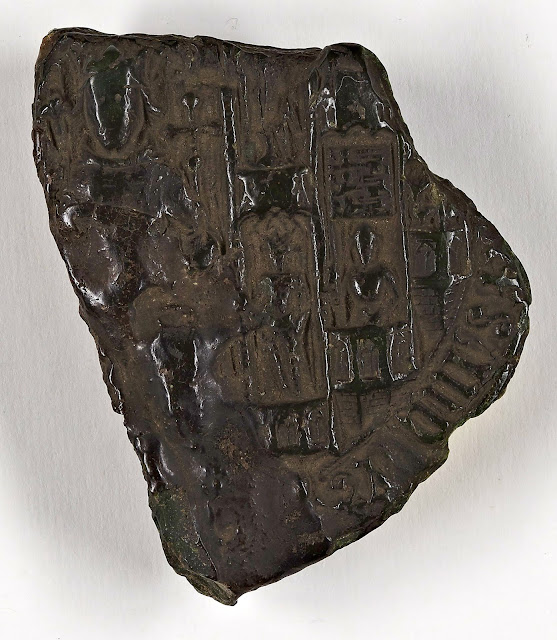 Fragment of the Great Seal of Henry V in brown wax.  Obverse (front) shows the King enthroned.  It was once attached to the document with the green silk cord, but has since become detached.

However, investigation in the Calendars of Patent Rolls (which summarize letters patent issued under the Great Seal) revealed that this type of blanket pardon, sometimes with the same wording, was fairly common during Henry V’s reign.  Henry was keen to tidy matters at home before he embarked on his campaigns, and in the wake of Sir John Oldcastle’s Lollard[3] rebellion, his domestic policy involved enforcing law and order.  At the same time, he wanted a peaceful, reconciled realm, and so issued sweeping pardons.

Henry was also a strong supporter and reformer of religious houses.  He wanted monks and nuns rigorously to follow their vows, since he was relying on their spiritual support and prayers during his reign, not least during the French campaigns.  He preferred more ascetic, austere monks like Carthusians, so he might have looked favourably upon Bordesley as one of the few Cistercian monasteries in a county dominated by large Benedictine[4] houses like the Priory of Worcester (by the 15th century, the Benedictines had gained a reputation for laxness in adhering to their vows). 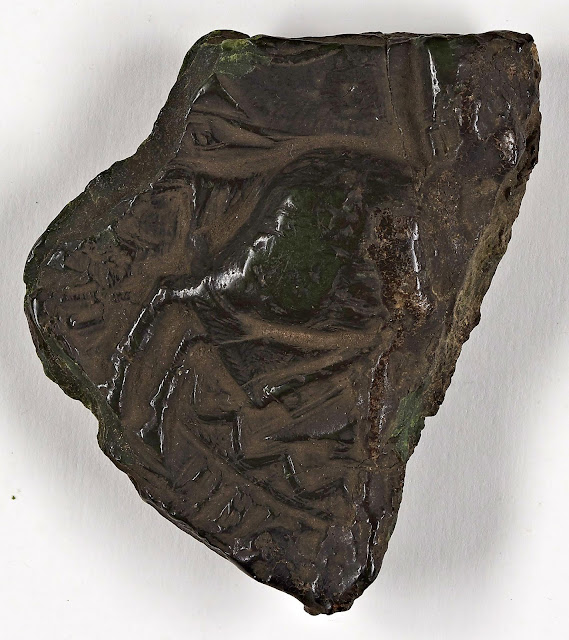 Fragment of the reverse (back) of the Great Seal of Henry V, showing the King on horseback

Bordesley was also a royal foundation, and as such enjoyed privileges, such as rights in Feckenham Forest.  The abbey suffered economically and culturally after the Black Death in the mid-14th century.  Bordesley seems to have enjoyed a revival in the early 15th century, perhaps shortly before Agincourt, and embarked on a building campaign in the abbey church and cloister.  On the other hand, they had leased much of their property, rents were low, and the abandonment and reorganisation of mills and industrial buildings within the monastic complex suggests they needed to keep an eye on their finances.

With this background in mind, it would be interesting to find out what exactly prompted the king to pardon Bordesley in 1415!  More research is required, but it’s possible that the abbot and convent, like other individuals and religious houses, wanted to ensure that they were on the new king’s good books, and applied for a pardon excusing them from falling foul of any recent statutes.  To add to the mystery, it seems that our letters patent were not enrolled, and they don’t appear in the Calendars of Patent Rolls.  This could mean that the Abbot didn’t pay the fee for enrolment for some reason!

Calendars of Patent Rolls (HMSO, 1891-1986).  University of Iowa Libraries has created a resource of searchable scans of the Calendars.

‘Royal grants in letters patent and charters from 1199’.  The National Archives Research Guide.

[1] Letters Patent are royal grants issued under the Great Seal for a wide variety of purposes, including conferring titles, commissions, lands, privileges, and pardons.  They were issued open with a pendant seal (rather than sealed closed), addressed “To all to whom these presents shall come”—a kind of public proclamation.  The original Patent Rolls are stored at The National Archives in Kew.

[2] The Cistercian Order was descended from the Benedictines.  They were known as White Monks because of their white habits, and emphasized austerity and living in remote, inhospitable places.

[3] Lollardy was a politico-religious movement in 14th-16th-century England based on the writings of John Wycliffe.  Lollard beliefs were considered heretical, but gained support amongst certain groups of the gentry and nobility, including Sir John Oldcastle, Henry V’s friend and comrade.  Oldcastle was arrested, but escaped and launched a failed insurrection in 1413-1414.  He was captured and eventually executed in 1417.