Explore Your Archive 2015: Celebrating the extraordinary lives of Worcestershire’s people

Worcestershire’s historic past is made up of multiple layers of lives: sometimes dramatic, sometimes tragic, sometimes unacknowledged and occasionally forgotten. Staff at Worcestershire Archive Service discover hints of these people every day when helping researchers to explore the archives, however, we rarely get to find out more about them. To mark the Explore Your Archive 2015 campaign, staff have selected five of Worcestershire’s ordinary citizens and have been busy searching our extensive collections in order to tell you more about their extraordinary lives.

On each of the next five days we will be featuring one of these little known, overlooked or perhaps even forgotten people who played an important role in Worcestershire’s past. For some of them we have been able to find very little and for others we have found plenty, which goes some way to highlight the nature of archive collections and research – you can never tell what you might find! We don’t want the stories of these people to end here though; please get in touch if you know more about any of our extraordinary Worcestershire residents and help us bring their stories to life.

The first story to be featured is that of Ann Osborn, a widow who volunteered to act as a midwife in the parish of Clent during the early 18th Century.

We knew nothing about Ann until we found this unassuming document that told us what an important role she played in her village. 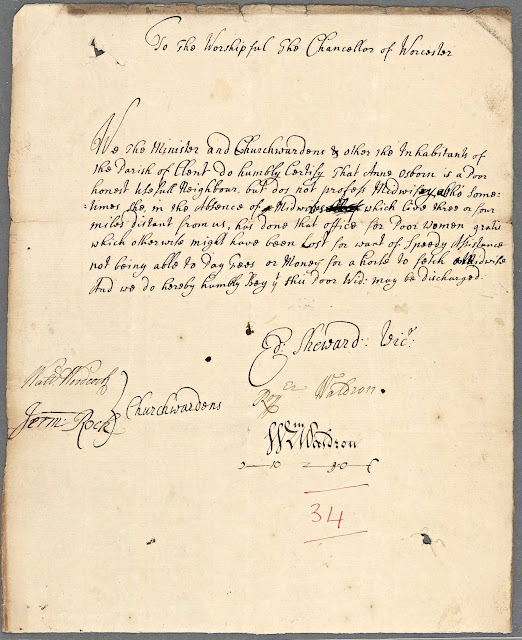 The transcription of the document reads as follows:

To the Worshipful The Chancellor of Worcester

We the Minister and Churchwardens & other the inhabitants of the Parish of Clent do humbly certify that Ann Osborn is a poor honest helpful neighbour but does not profess Midwifery [although] sometimes she in the absence of midwives which live three or four miles distant from us, has done that office for poor women gratis which otherwise might have been lost for want of speedy assistance not being able to pay fees or money for a horse to fetch a midwife.

And we do hereby humbly beg [that] this poor wid[ow] may be discharged.

Although the document is not dated, we have been able to narrow down the timeframe by looking for the dates when the vicar, who has signed the document, the Reverend Edward Sheward, was in office, which was from approximately 1719 to 1735.

The document was found amongst the Midwife Licences. It tells us that Ann lived in Clent and was a widow. We do not know whether she had children or was an elderly widow, either way her day to day life would have been quite hard. But she still gave up her time free of charge to help her neighbours who had no money to employ a midwife. The fact that her village recognised her work enough for the vicar and churchwarden’s to petition the Chancellor of Worcester for Ann to be granted a licence to practise her skills shows how vital her work was.

Ann’s contribution to the lives of women in her village was huge, and without her help many women and their babies may have died during childbirth. Perhaps without the discovery of this document Ann’s life and her valuable work would have gone unacknowledged.

Did your ancestors live in Clent during this time?  Do you have any information about Ann Osborn? We would love to hear from you if you have more information to add to Ann’s story. Drop us a comment here on the blog, on our Twitter page or email us: archive@worcestershire.gov.uk.