Today we mark Explore Your Archive 2015 by looking at the extraordinary life of a man who worked for a short while as House Surgeon at Kidderminster Infirmary and went on to take part in one of the early Arctic Expeditions.

A chance discussion with a researcher in our Original Archive Area led to the discovery of a fascinating entry within a Kidderminster Infirmary minute book, dating from 1874-75. Nestled in amongst the reports is an entry which details how Arthur Horner, House Surgeon,  was tendering his resignation… ‘stating that he was about proceeding to the Arctic regions’. 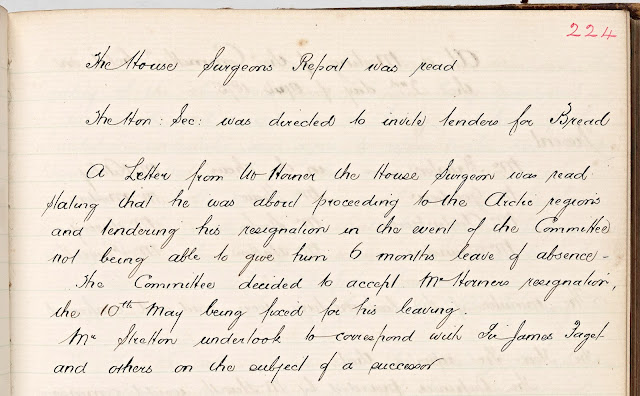 Unfortunately, the Pandora was not able to reach its target of the magnetic pole due to heavy ice flows. Horner returned to the Canadian Arctic the following year on the Pandora as part of the British Relief Expedition, taking official messages to Vice Admiral Sir George Strong Nares who was leading the British Arctic Expedition searching for the North Pole.

On his return, Horner published his experiences in ‘Notes on Arctic Natural History’. He died in August 1893 at Tonbridge.