Today we mark Explore Your Archive 2015 by looking at the life of a man who worked as the first County Surveyor for Worcestershire.

Joseph Garrett was born in Gloucestershire. He worked as a road surveyor and, according to his obituary in the Worcester Journal he became head surveyor in Kidderminster in 1877. He became the first County Surveyor for Worcestershire in 1889. 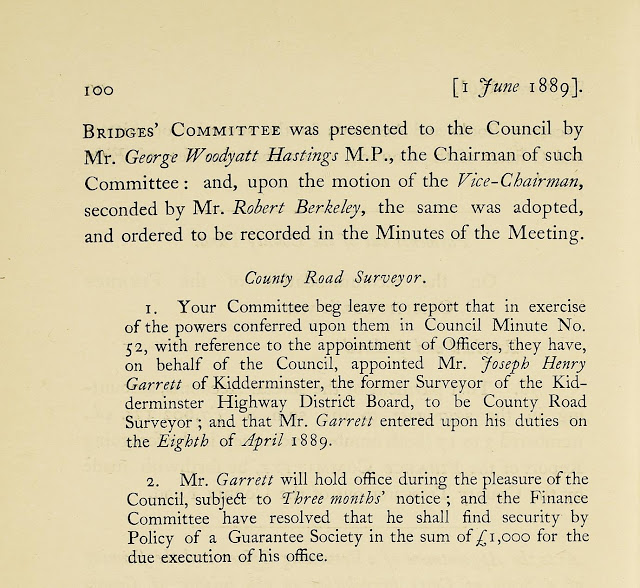 The 1891 census states that he moved from a small terraced house in Kidderminster to Kendale House on Rainbow Hill, Worcester. According to the 1901 census he was living with his 3 daughters in a house called the Oaklands; a very grand house on Lansdowne Crescent in Worcester.

The 1901 census also hints that Joseph Garrett’s home life may not have been a happy one. His wife is missing from his household, but Joseph is not listed as a widower. A further search of the 1901 census showed his wife living elsewhere with companions. We can only speculate as to what happened, but as marriage records tell us that they were married in a Catholic Church, divorce would be out of the question.

From the time of his appointment, Joseph worked tirelessly to improve the County’s roads, which included trying to introduce to a very sceptical group of councillors the benefits of having their own steam locomotives to haul equipment instead of hiring one for each road repair. The committee’s response to his request was swift. The minutes of 21st May 1892 state:

However, Joseph Garrett did not give up and by 1896 the first steam roller was delivered. By his death Worcestershire had a fleet of steam rollers which helped to turn simple cart tracks that became quagmires in the winter to hard wearing roads that could withstand the onslaught of 20th century traffic.

Joseph also created a schedule of all the bridges in Worcestershire that carried main roads. The volume was published in 1902 and is available to view here at Worcestershire Archives (ref. L624.2 in the Local Studies Reference Library). The schedule lists each bridge by borough giving their names, description and other details.

Mr Garrett died suddenly on the 19th March 1911 at the age of 63, still County Road Surveyor. His death is recorded in the Berrows Worcester Journal on the 25th March 1911. 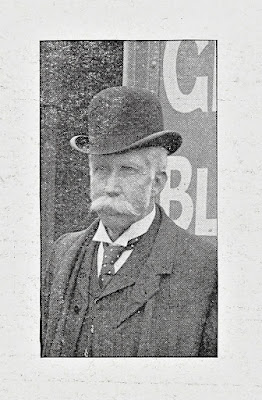 Image of Joseph Garrett, taken from Berrows Worcester Supplement for 1911

Whilst Joseph Garrett’s role may have been somewhat forgotten over time, his work for the County Council is marked down in history thanks to it being recorded within the official minutes. This is just another example of records Worcestershire Archive Service has available to research for information on people throughout Worcestershire’s history.

Are you an ancestor of Joseph Garrett? Did you know about the role he played for the county? Do you have any ancestors that worked for the County Council? We would love to hear from you, so drop us a comment here on the blog, on our Twitter page or email us: archive@worcestershire.gov.uk.